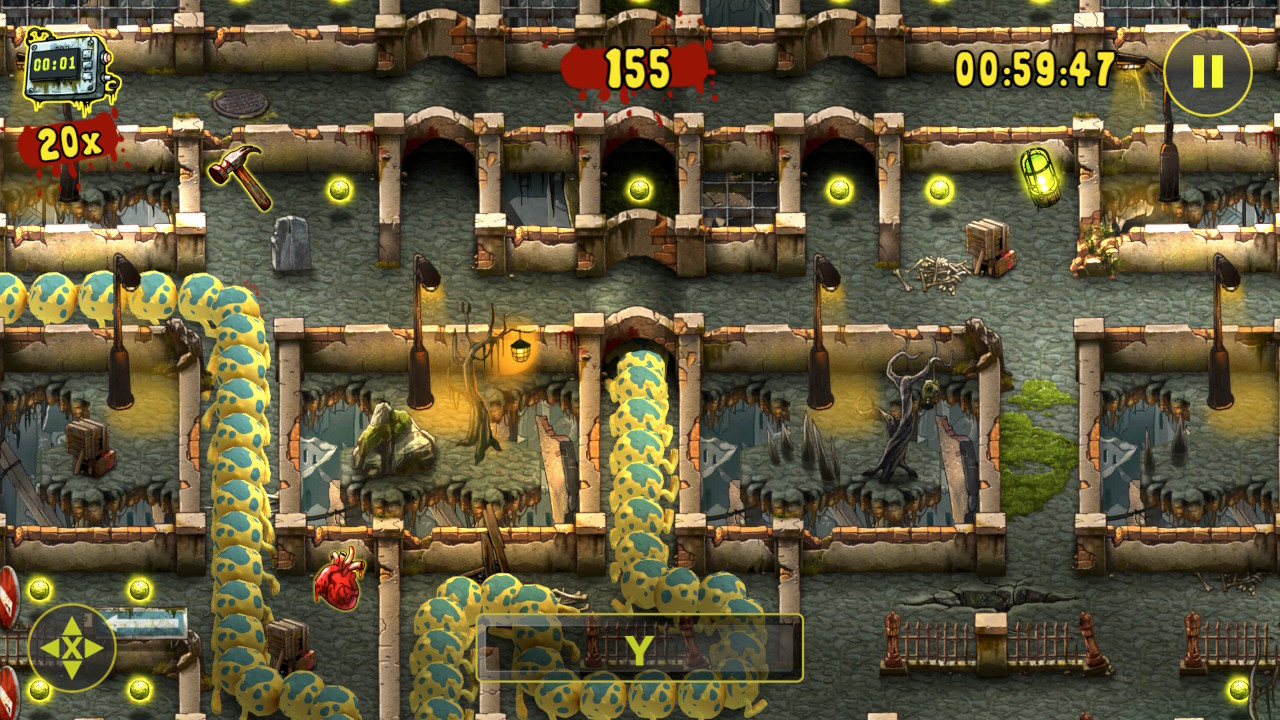 There’s this idea that used to be quite popular of “creepy cute” that permeated the cultures of the world, specifically in Japan. It’s that notion that you can ride the line between something that’s borderline disturbing but still have it appear adorable. The best example of this is Gloomy, a homicidal teddy bear who is frequently pictured with bloody claws after having eaten his friend. If this doesn’t sound cute, it shouldn’t, but the presentation and color scheme make it work. It’s not entirely clear if Forever Entertainment S.A. was going for this aesthetic when they made Zombillie, but I can assure you that they totally missed the mark.

Zombillie is a bizarre creature that appears to be a gigantic zombie caterpillar/centipede. Zombillie dreams of a day when it can gorge on as much flesh as it desires, and, today, it’s making the necessary steps to achieve that goal. Crawling across 90 levels of mazes, Zombillie will eat it’s way through dead ends, angry zombies and it’s own growing abdomen to reach those delicious stores of live meat. This game particularly doesn’t sit well with me because it’s somehow managed to take the rather well-trodden pathway of zombies and made it different, but also more disgusting. Like, we get it, zombies eat brains and destroy people, it’s hardly a shocking concept. But having a giant zombie bug intent on just ingesting everything is actually a bit more nauseating. 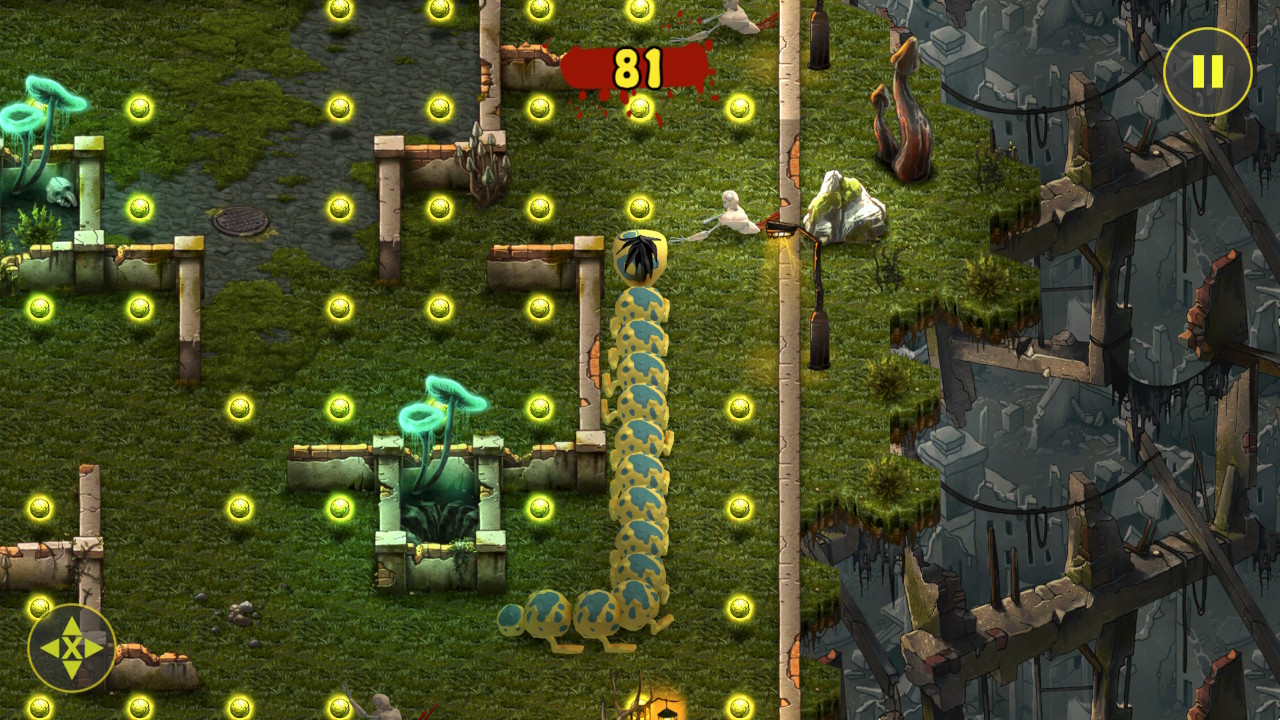 Once you get over the initial shock of the game, Zombillie plays out as an incredibly complex version of Snake. Much like the original cell phone game, Zombillie will gradually grow larger and larger as it eats all the items on the screen. You can’t run into your own body or it’s an instant game over. But, instead of being a free form level with no set pathways, you’re paths are very tight and specific, and more than a few dead ends exist. There’s a quota to what you must eat to finish a level, but, for the true completionist, you want to eat every single thing and get to the sewer exit that opens in record time. Zombillie does have three difficulty settings, each controlling how fast you grow, but the easy setting reminds you as such every time you finish a stage. Like it’s mocking you for not wanting to play on normal. So naturally you move straight to normal and then get killed.

Now, if this was just a Snake clone, we could have written this off as a cheap bandwagon of the zombie craze and moved on. But Zombillie does do a great job of implementing different tools to help make the game more interesting. For example, you can use a meat cleaver to cut off segments of your body in order to reduce collision likelihood. Or there’s a strange science machine that rewinds time to a couple of moves before you crashed, giving you an opportunity to try again from a specific point instead of restarting all your progress. These items and more are all limited use: no unlimited chops for you, buddy! You pick up quite a few throughout the levels, and the starting amount you have is surprisingly generous. If you’re really hard up, there’s a “store” where you can purchase additional powerups, but you don’t use real cash, but, rather, the hearts you accumulate throughout the levels. It’s novel, and you can show off your horde of hearts to prove that you didn’t need help to make it through.

Additionally, there are some clever minigames intermixed to help breakup the gameplay. For example, when you cross a certain number of levels, you suddenly encounter a semi “tower defense” sort of deal where zombies are trying to keep you out of their area. They do this by shooting at you, and you then break up into smaller segments. You only need to get one segment across the finish line to win, and the larger the segment the better the points you receive. I actually really liked this, simply because it was different and added a bit of randomized strategy that I wasn’t feeling in the main game. 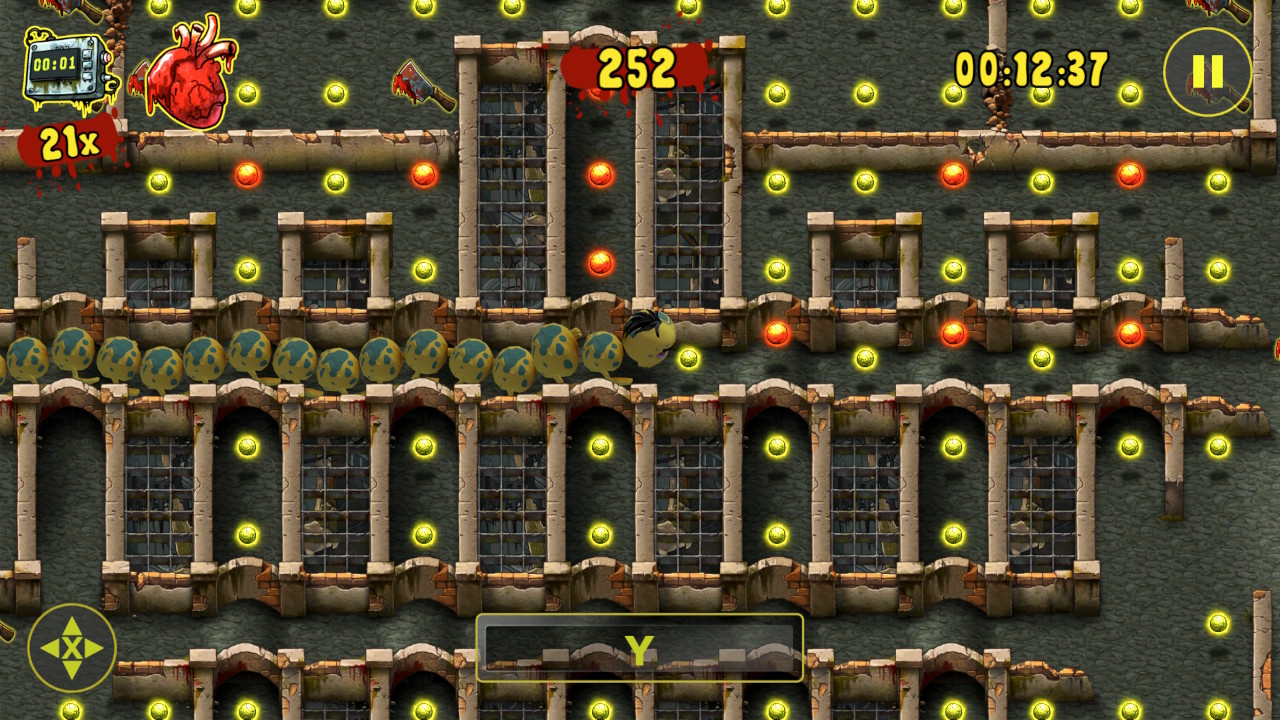 Sadly, Zombillie doesn’t quite have the mindless appeal of Snake due to the way it plays out. Rather than winning through luck and persistence, you realize there is an ideal path you want to find in order to maximize your time, pickups and no deaths. It stops becoming a casual puzzler and turns into a trial and error machine where you die a LOT to figure out how to get what you need. Several times, I encountered sections where I wouldn’t fit at all if I didn’t go to those places immediately after spawning. But they were outside the set camera range, so how could I know if I didn’t play and die first? That kind of “you must fail to succeed” mentality might work for some gamers, but, for me, it feels almost smug of the developers. I’m not saying it’s bad, I’m saying it simply doesn’t gell with my relaxation.

And, as I mentioned up top, Zombillie is so unbearably UGLY. I desperately need Forever Entertainment to update the Switch logo so that it’s something other than a closeup of Zombillie’s head. It makes me ill and I don’t want to see it on my Switch. This character is passable when it’s in action, but, for standalone stills, it’s repulsive. My kids absolutely hate it, they say it’s scary, and it’s sitting next to the logo for Death Road to Canada (review coming soon). That, somehow, isn’t scary, but this one is.

Still, as far as innovative and interesting puzzlers go, Zombillie definitely delivers by going the extra mile to spice up the Snake formula. It’s pretty interesting, captivating, and a lot of unique play for a pretty low price. If you’re one looking for a different way to pass the long afternoons, or you simply love the idea of a masochistic puzzle game, Zombillie has a bone to pick with you, and it wants to pick it BADLY.