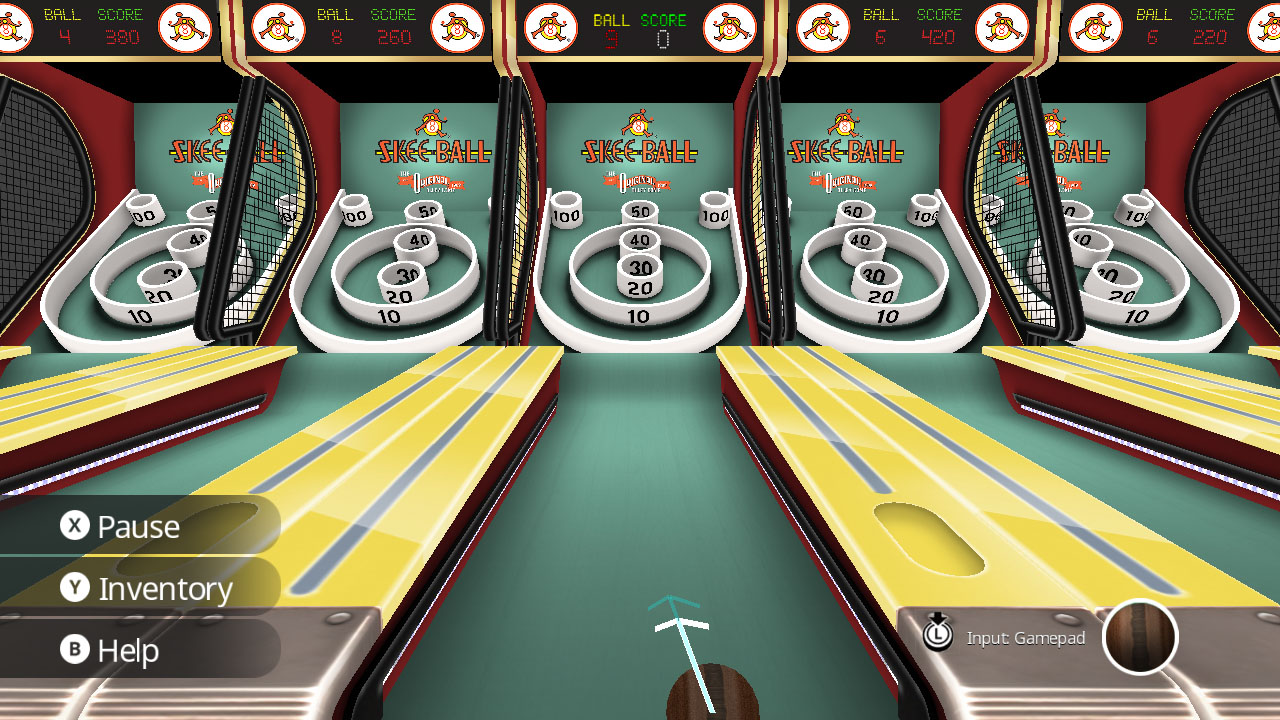 Arcades are the frigging best. I know, it’s a dying genre that’s only being kept alive either ironically, with alcohol involved, or with some kind of stubborn, inexplicable staying power that comes from being many decades old. Galloping Ghost, knock on wood, will outlive us all. My love of pinball is absolutely unquestionable, but I also have a soft spot for some of the classic redemption games. Not any of the new ones that decided Fruit Ninja is how you win tickets (seriously, good for HalfBrick but shocking in any case). But the classic, physical presence redemption games. Skee-Ball is one of my favorites, having played it for the better part of three decades, and it seems like one of the best to enjoy across all generations. Even my kids like it, and they were born into a world where smartphones were just assumed. So seeing Skee-Ball on the Switch felt like a match made in heaven. A fun, simple game that everyone can enjoy! Perfect, right?

I won’t insult you by explaining Skee-Ball. You roll a ball, it gets into a point cup, you win points. If you search for an image of Skee-Ball or even look at the screenshots here, you’d be able to work it out in mere seconds. Points equal tickets, tickets equal prizes. In the case, Ocean Media decided that the tickets could be used to unlock things like special balls, different tables and even extra game modes. In theory, these all sound cool and add some nice variation to an otherwise simple game. The special balls, for example, add extra points to each shot, or make the shot multiply by a certain amount. Hell, you can even unlock a flying ball that just goes straight into whichever cup has the highest value. While these might seem like overkill, you find yourself using them from time to time because you will get randomly assigned challenges at the start of some rounds. Accomplishing the challenges will either unlock new balls or give you a set amount of tickets, which are generally much higher than you’d normally get from a standard round. Sixty tickets, for example, is an incredibly generous bounty when you might get as little as five tickets for a bad round.

And the aesthetic of the game seems to be on point with what I’d want to see in a Skee-Ball alley. You’ve got a few machines on either side of you, the music and atmosphere feels like a nice boardwalk game center, and it’s a cool midway style overall. I can’t complain about how the game looks. In fact, I would argue the presentation is one of the most authentic and successful parts of the whole game. Given that this is an “officially licensed Skee-Ball game,” I would be dismayed if they went with some kind of off-brand, weird genre take on it. I’m not saying no to a steampunk or cyberpunk Skee-Ball game in the future, I’m just saying the original should be close to home, especially when bearing the brand. There are these two “holiday” tables that are available from the start, and they’re…strange. Like hitting jumping turkeys with the Skee-Ball. It’s a nice changeup, even if it’s a bit odd, but at least it’s something different from the very beginning, which I did appreciate. 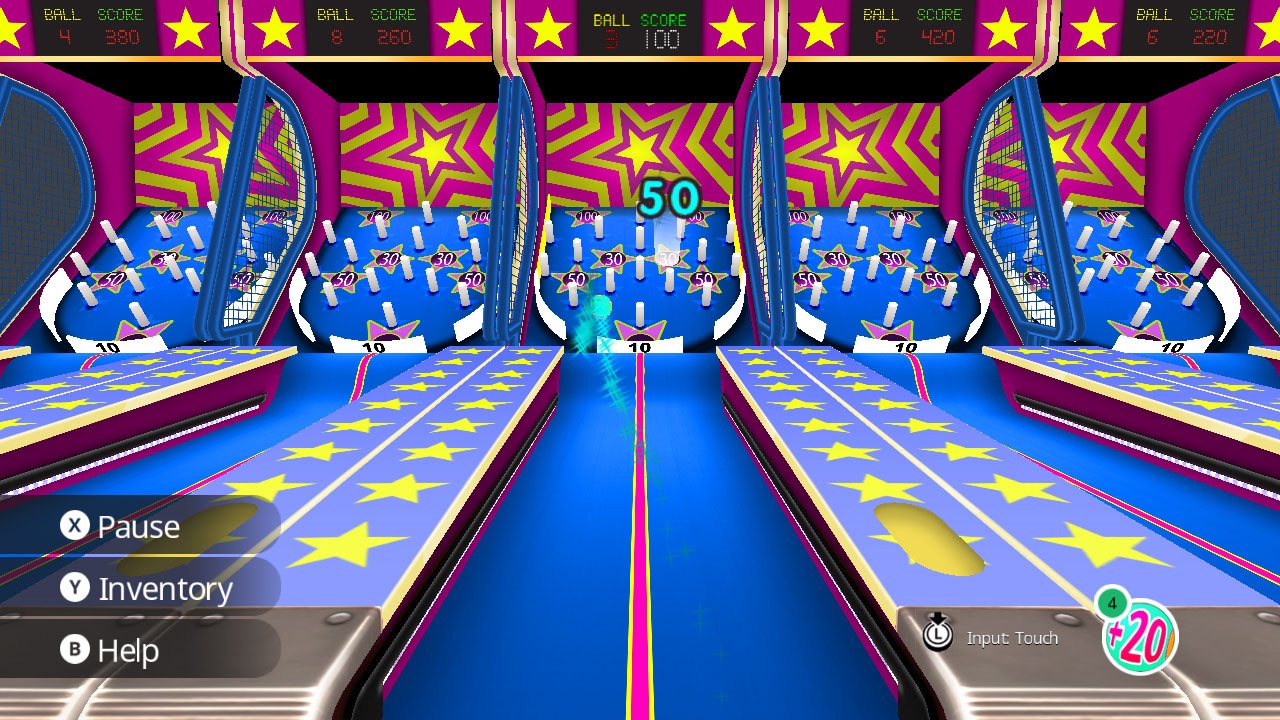 Sadly, that’s the end of the niceties for this game. Skee-Ball really, really disappoints, and it’s not just because there’s no simple multiplayer. Wouldn’t that have been cool? A nice split screen mode, two lanes side-by-side, and two friends just using motion controls, like the kind that have existed since Wii Bowling in 2006, pretending they’re on an arcade date in the 50s? Well too goddamn bad, because there aren’t motion controls. I’ll say that again, because this is the biggest wiff you could have imagined. There are NO MOTION CONTROLS. Instead, you get this geometry puzzle of a game where you line up the shot, hold down ZR to power up, release it at the appropriate time, and then cross your fingers that the game is feeling generous because the physics feel arbitrary. It seemed like, even if I powered up to the exact same spot as the last shot, it could go to a completely different section of the lane. There wasn’t an earthquake or a magic icy ball, it was just awry and screwy.

Speaking of the weird physics, you quickly learn that actually lining up the shot isn’t as important as “not hitting the wall.” If I just threw the ball as hard as I could and got it into the corner, it would magically drop from the ceiling and get into the 100 point tube. Do you know how many times I hit 100 points in real life? Frigging zero. Never got it, it’s a hard shot and I respect people who do. I got 500 points in one game because I flung the ball wildly into the corner and, as long as I didn’t hit the lane wall on the way up, bingo, 100 points. That’s not how the game works! But I took it, because I needed tickets. Like, I NEEDED tickets. Because the whole thing is a shakedown in terms of tickets.

Remember those cool balls you can unlock? The lowest one starts at ten tickets for one ball. That’s just a ball that adds ten points to your shot. It turns a shitty shot into a slightly less shitty one, and a great shot into a slightly greater one, but holy Christ I just spent ten tickets for ten points. Ten points gets you ZERO tickets. But don’t worry! You can save up your tickets to get a bundle that has all the balls, all of them, for one low price! Four THOUSAND tickets. Keep in mind, if you just mash the ZR button like a trigger fiend and empty your ball reserve as fast as possible without colliding (you can hit your own balls with your own balls), you might get about five or six tickets in ten seconds. Counting the reload time of the game uploading your score to the internet EVERY TIME and then starting over, you can get…like twenty tickets a minute. So, if you play Skee-Ball like a fiend, like it’s the only thing keeping you out of jail, you might amass somewhere around 1200 to 1400 tickets in about an hour. That seems decent, but that also means playing Skee-Ball relentlessly for an hour. So around three and a half hours of your day to unlock those power ups. 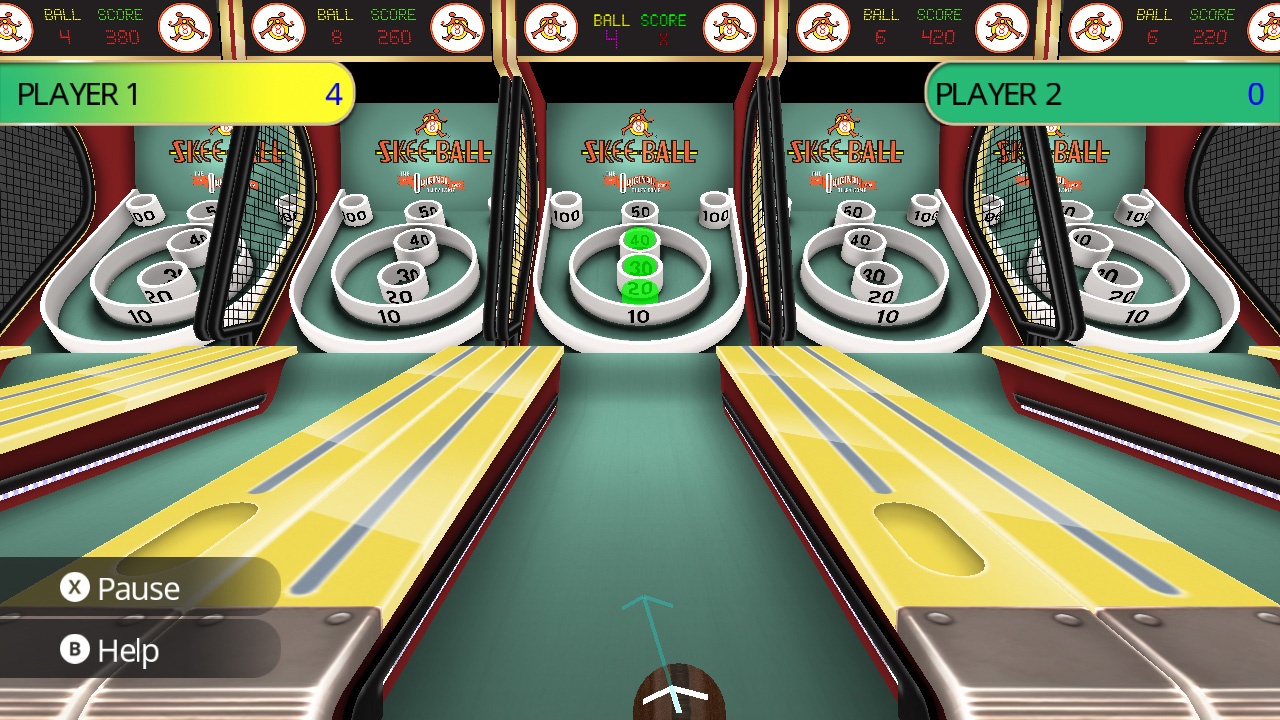 And that’s just the extra balls. Want a new game mode? 750 tickets to get something that’s either kind of silly (unlimited shots for two minutes) or incredibly frustrating (call your shot before throwing). This is the only way you can get a two player game, by the way. If you want to share the Skee-Ball fun with someone, you first need to take turns grinding 750 tickets to choose a game mode that MIGHT have two players. You should be able to do two players from the very beginning! Want a new table because this one is kind of ugly? Two thousand tickets. That’s close to two hours of playing to make the game look different. I know that, for many games out there, playing that long to unlock skin perks and stuff like that doesn’t seem like much, And, if I’m being honest, getting those different modes in Skee-Ball, plus the different lanes, PLUS the constantly updating online leaderboard, is a good situation overall.

But that’s if you’re playing Skee-Ball. Honest-to-goodness Skee-Ball. I’d pay five bucks for a week of unlimited Skee-Ball whenever I wanted, sure thing. This isn’t Skee-Ball. This is like a weird version of pachinko because I don’t feel the weight of the ball or even my own arm strength in the deal. I’m just pointing and shooting. Even Super Ping Pong Trick Shot got motion controls down, and Ocean Media couldn’t be bothered to put those in. Whenever I get a shot, the game resets me back to the center. It doesn’t matter how long I took to line myself up, get the angle and make the perfect shot, I just respawn in the goddamn center of the lane, stock straight, like I’m new to the concept all over again. Mashing the ZR button and sometimes getting it into the 50, sometimes into the 10, always at the exact same strength and feeling my will to live disappear.

This is a massive disappointment from top to bottom. The only way to enjoy Skee-Ball in this capacity is to make a Sisyphean goal to unlock simply everything and ignore every part of your brain screaming at you to quit. Don’t buy the extra tickets, don’t worry about the challenges. Just hammer down, grind forward. With options to only turn the music, sound and tutorial on and off, there’s no toggle to make this game appealing to curious folks at home who are eyeballing that twenty dollar price tag skeptically but intriguingly. I have to break the bad news to my family there are no motion controls in this game, and it’s gonna be like canceling Christmas. Bay Tek should reach out to Ocean Media and see if this can be updated to be made right, because, frankly, having motion controls would make this whole thing just a lot more palatable. Otherwise, this is a hard pass for nearly everyone.