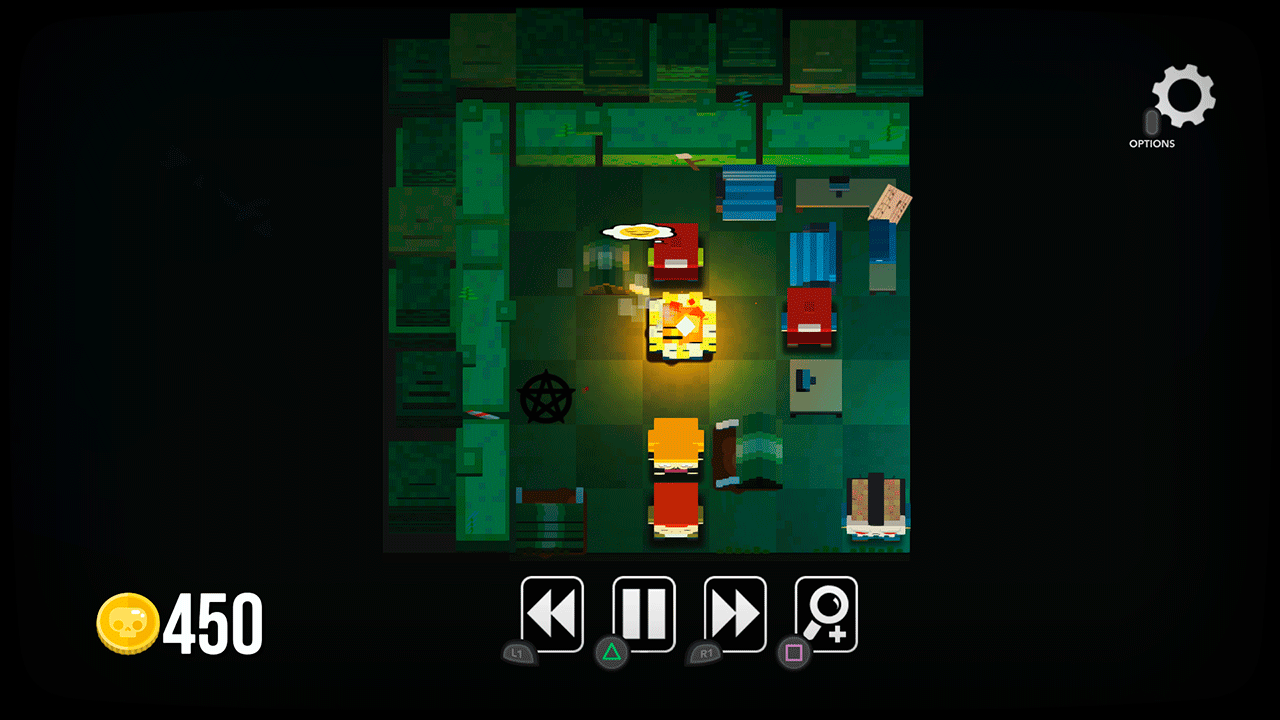 In can’t be denied that the 1980s were the pivotal times of horror/slasher-style movies, with their VHS-taped genres undoubtedly at the height of their popularity. Films such as Friday the Thirteenth and Nightmare on Elm Street have spawned many remakes or provided inspirations since then, even in the fields of video gaming. The latest such iteration comes in the form of Slayaway Camp: Butcher’s Cut – Deluxe Edition, as it sharpens its blades to re-appear on the Playstation 4 in a definitive version that comes bundled with a whole load of murderous goodies.

Developed by Blue Wizard and published through Digerati, this puzzler plays in a similar mechanic to the Go series of games which has starred the likes of Hitman and Lara Croft. Viewed from an isometric perspective, you slide your character along an up, down, left and right axis, avoiding hazards and taking out targets. There’s nothing new here from other titles that run in a similar vein, however it’s the presentation and subject matter that makes Slayaway Camp stand out from the competition.

Paying homage to the slasher movies of the past, albeit in a very parodic style, Slayaway Camp casts you as a serial killer. Your objective involves slashing your way through three hundred-plus levels of maiming mayhem through a variety of camp lodges, each one packed to the rafters with potential teenage-pheromoned victims. By utilising a number of techniques, you hack-and-slash your way around a grid-like structure, using all manner of weaponry and environmental objects to bring the scares in a gore-fest that’s suitably sickening to the settings of the game. 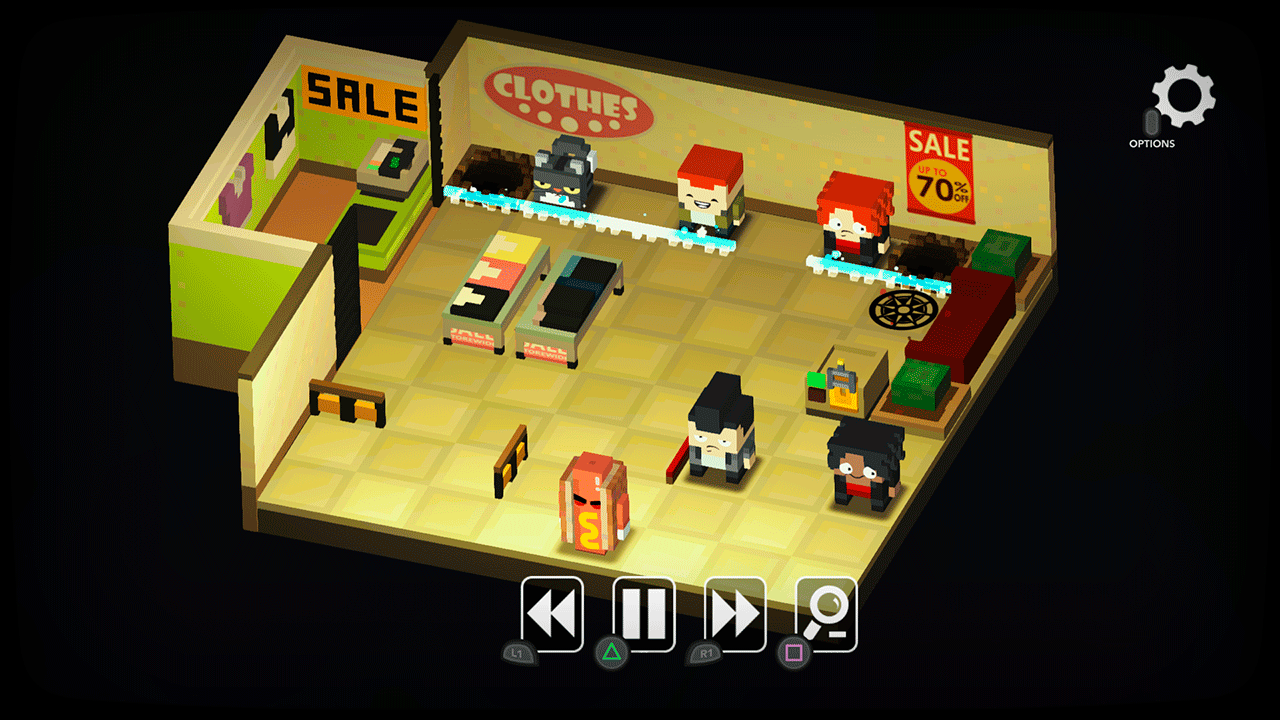 It sounds like a simple premise, but a series of mechanics are introduced as you progress through the game that requires some strategic thinking in order to complete them. These come in various forms, such as armed police, toppling bookcases that can kill or hinder, telephones that create distractions and limited moves. All of these add to produce some puzzling conundrums that provides a complexity that isn’t as simple as it first seems. As well as these mechanics, certain levels also contain hazards that are a danger to both you and your victims. These can be utilised as tools for some fitting deaths, but they can also hurt you just as much and your movements need to be considered in order to avoid self-harm.

However, due to the presentation of the game’s themes, settings and content, each level is introduced as if you were watching an eighties flick on video. This in turn presents you with a number of options that allows you to rewind, pause or fast forward the action. By setting the action back, you can undo any mistakes; even allowing you to rewind back to the beginning of the level, or movie. Whereas, fast-forwarding gives you a preview on how to complete your task, but comes at a cost of coins that are collected as you complete certain kill-fests that are as gory as hell.

Level selections come in the guise of browsing the shelves of your local video rental store; an ingenious part of the game’s presentation by the developers. Each title contains a parody of slasher films from the past and are suitably hilarious; something that is abundant throughout the game despite its gory and horror-fuelled intentions. From here, you can also buy, with your collected coins, or select a variety of over sixty different killers with whom to play as and a selection of ninety-plus gore-packs which contain various over-the-top kill scenes to satisfy even the most-hardened serial killers. 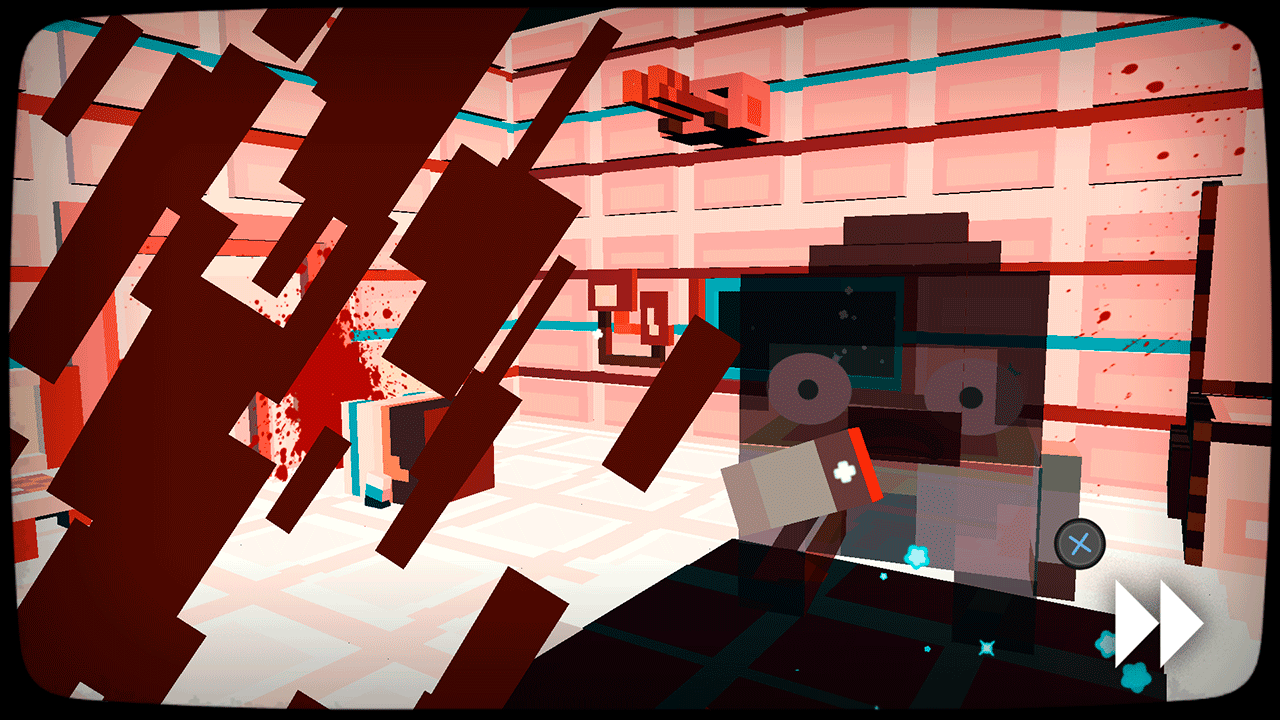 This deluxe version of the game contains the base package of the Slayaway Camp: Butcher’s Edition, which is the most definitive version of the game presently available. However, it also comes a whole of extra additions to further enhance your experience upon the Playstation 4. As well as the game, this version also comes with a variety of five different avatars of some of the in-game characters, a new theme with which to decorate your dashboard and the official soundtrack to the game as recorded by Canadian Group, GNÜ TRUNTION. These new features don’t add anything to the game but, if you’re a fan, do provide some nice cosmetic features with which to add some personalisation to your console and profile. However, these extra features do come at an increased price from the base game and whether these extras are worth paying more for is, obviously down to personal preference.

Whatever edition you decide to opt for, Slayaway Camp offers a fun experience in either of its current versions. Its presentation values are exceptionally high, with a comedic setting that easily outshines its goriest offerings. From film intros, or trailers, to the various ways of disposing your victims, everything oozes with a quality that can easily match some of the triple-A titles available today. It’s sound track is suitably menacing, creating an ambience of fear that is never tiresome of listening to; something which adds some value to the inclusion of the game’s soundtrack with this deluxe version. If you own a vita, this game transitions beautifully through remote play, allowing you to take part in your murderous ways anywhere or anytime.

Overall, Slayaway Camp: Butcher’s Cut – Deluxe Edition is a sublime example of the puzzler genre. Although its content may be questionable, the game provides many options with which you can tone down the gore or violence if it really isn’t your thing. The value of this deluxe edition can raise question marks against the standalone version of the game, but it all depends on how much you want the extra content. This doesn’t take anything away from the game, after all, you’re buying a quality title and getting more for your money! If you’re a particular fan of the horror genre, or have fond memories of browsing your local video store, then this is a title that will satisfy immensely; especially with its reminiscing presentation. However, if you’re more of a puzzler fan, then again, this game will deliver an experience that is second-to-none in its genre. At the end of the day, this is a killer of a game and to not make a purchase, would be simply murderous.