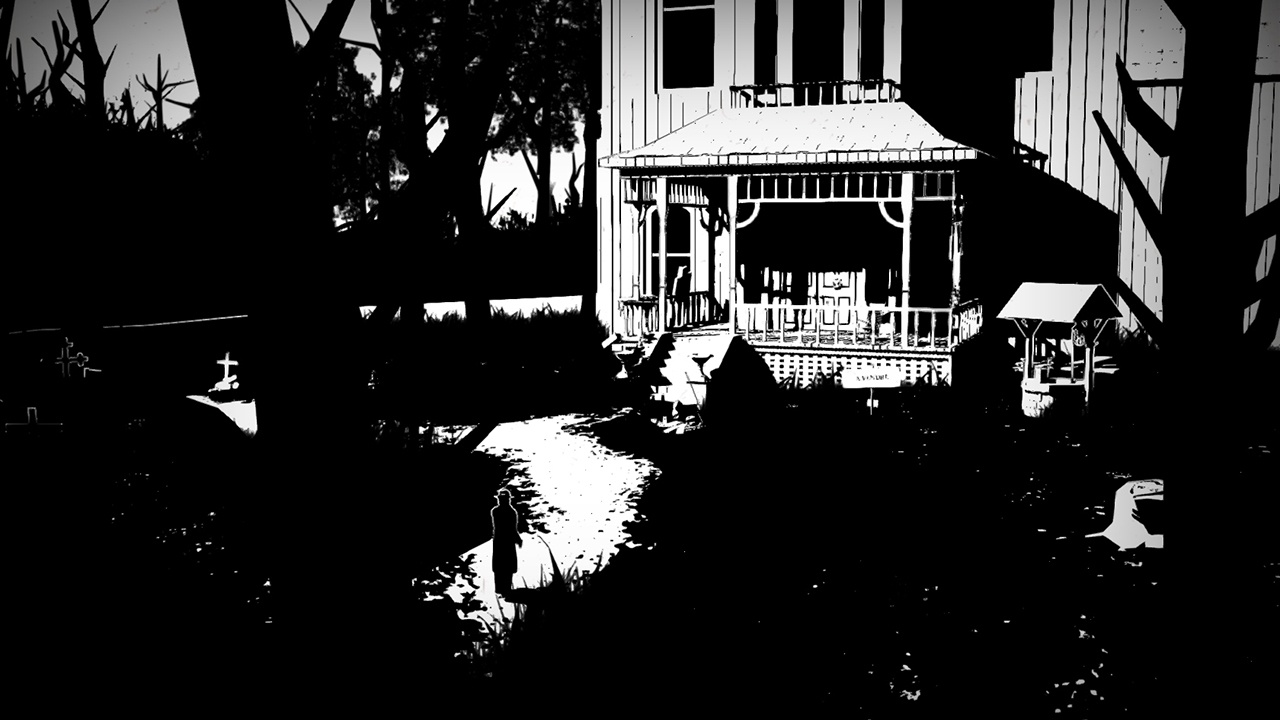 White Night is one of those games where it feels like it should be amazing, with its interesting art style, engrossing sound design and in-depth and fascinating story. Yet something seems lacking in Plug in Digital’s survival horror game which takes you on an investigative journey through an abandoned house. Even though a perfectly palatable horror with lots for players to interact with and explore, there are a few core issues that need to be addressed.

Firstly, the plot. The game begins with your character driving along a road by moonlight, with the games signature song playing creating a sinister feeling, which at first got me excited to play, anticipating what would come next. After an accident on the road, your character is injured and seeks aid in the nearby house where he discovers supernatural happenings, turning his quest to get medical aid into a full-blown attempt at survival as he faces ghouls, apparitions and the dark in which they fester. As the game progresses, you learn more and more about the tragic event that happened in the house so you can solve the mystery. As you explore, your character will make comment on many things he inspects, which is where my first misgiving with the game comes in. The writing can so easily slip into cliché noir dialogue, and sometimes this can work and give a sense of tone or even nostalgia for fans of the genre, however some of the things your character say just undercut the suspense that the game is trying to build up. He talks a lot about how he has a feeling something is off about the house and how he feels something supernatural is happening in a manner that he hasn’t just seen several ghosts or signs of cultism. It can become very frustrating. Nonetheless, once the plot picks up in the later chapters this problem fades and you can become properly invested. 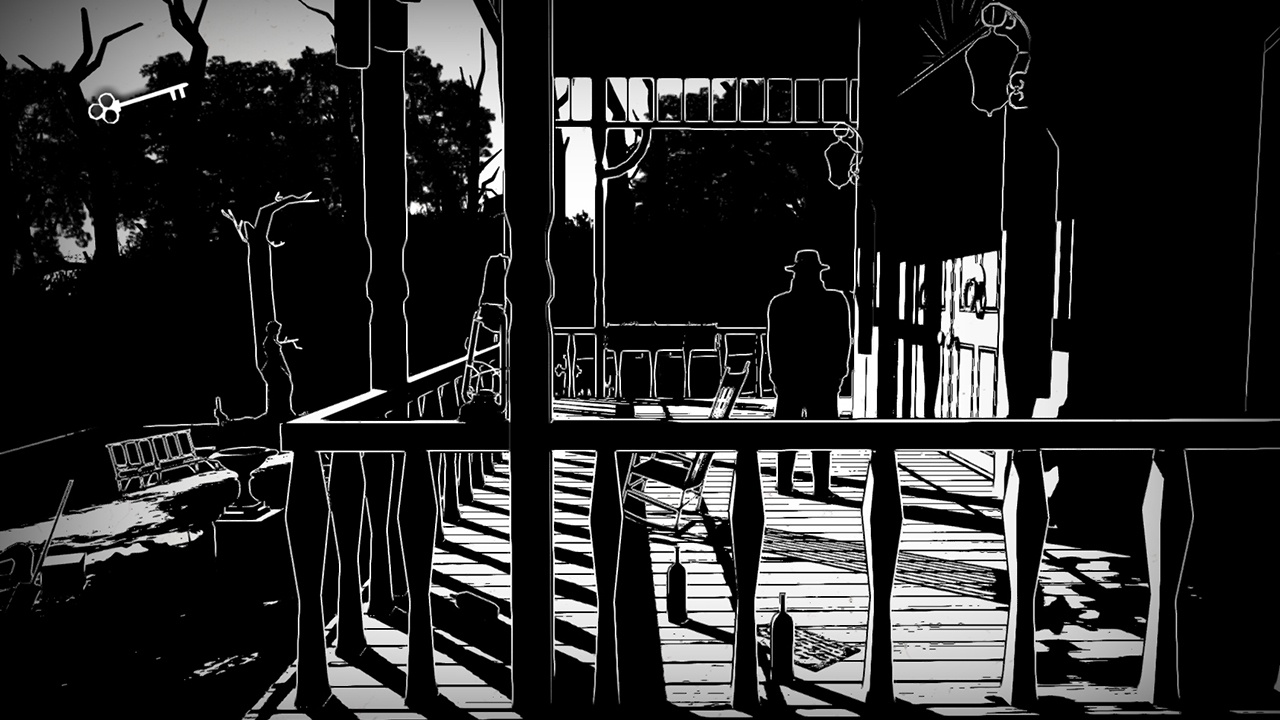 The game is visually stunning, drawing greatly upon the noir genre, which led to the game adopting a solely black and white colour palate in a 3D world, which turns into one of the game’s greatest attributes, using the light and shadows to excellent effect to create a sense of place as well and effectively using this mechanic to create puzzles and that sense of horror when you can’t find the place you want to go. However this can also be one of the game’s greatest hindrances and often it can be frustrating to find things or even identify key items from those that are just for show. The house is also really well designed, with plenty to explore as you go from room to room (even though there is a lot of back and forth), with each being distinguishable so there isn’t confusion when a clue suggests to go to a certain place.

The music and sound design is well crafted, with the emphasis of certain sounds, such as a ticking clock or wind chimes creating the suspenseful atmosphere you would want when playing a horror game. The song that is present throughout is also equally chilling and I love its use throughout the game for dramatic tension. 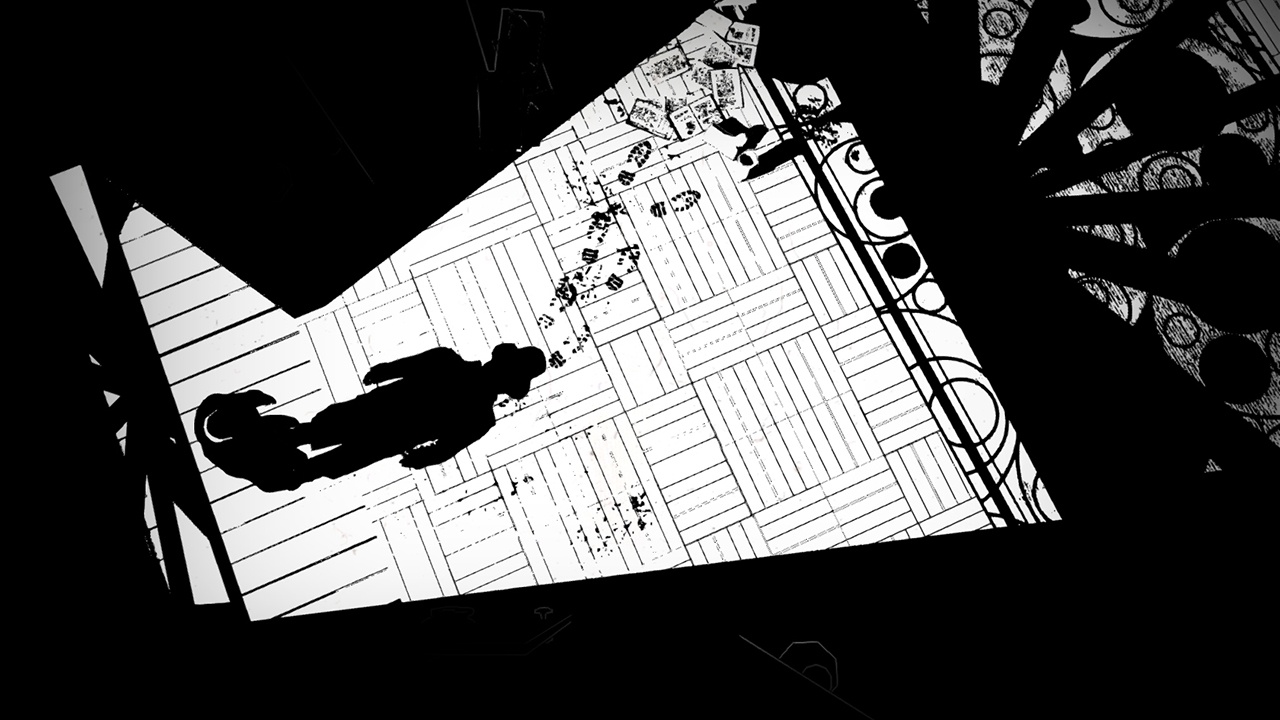 The biggest problem I found with the game was the mechanics. Firstly, even though I said I love how the black and white noir style is amazing, the aspect of noir that I’m not a fan of in the game are the choice of camera angles. These are all fixed, no matter where in the game you are, which becomes frustrating when you constantly want to change an angle and evaluate your surroundings, something important in a game with a fully 3D environment, with the camera being more restrictive than anything, especially in an environment where you have to distinguish between shadows and light. The game also moves really slowly, the narrative reason for this being the injuries your character has sustained during his car crash, however this does the game no favours. In the first chapter the fastest you can move is a slow limp, which extends the length of going anywhere to an excruciating length. In the second chapter, you gain the ability to run, however this still feels slow, especially when you are going from room to room to get items or more matches (your source of light in the game which you find scattered throughout the house). These problems made them game infuriating as I felt I was just doing a lot of walking back and forth as the game progressed.

If anything, White Night is a great experimentation into a black and white horror game, and it does a great attempt at highlighting the genre it replicates. However, with often cliché dialogue, slow-moving game mechanics for a plot that feels like a faster pace would work better, and frustrating fixed camera angles dulls the experience of what was a promising game.