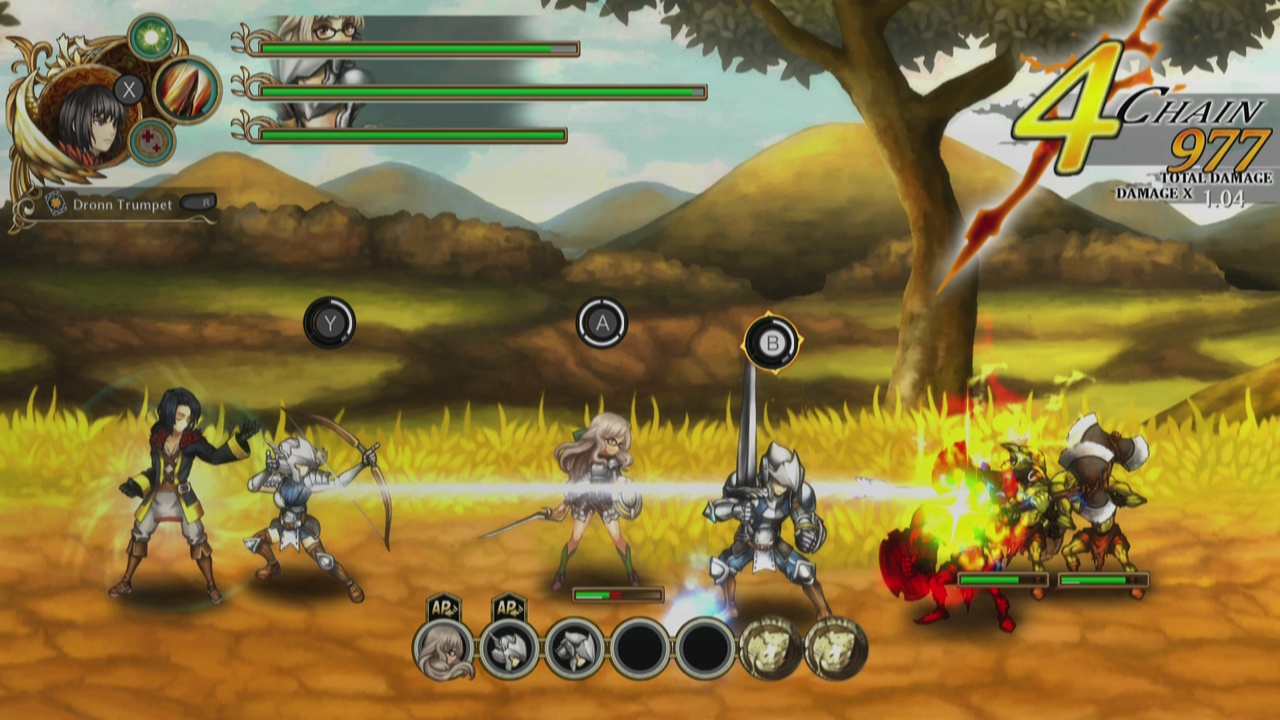 The history of war is often written by the victors, or so the saying goes. It’s something where, do to the nature of the losing side either being wrong or, in more extreme cases, erased. It’s a modern invention to have conflict painted from both sides so that a even portrait is created. More often than not a definitive “correct” version of history emerges, and the nuanced details of the extras are forgotten. But how will the story sit when neither side is “wrong” and both have stake and claim in the annals of history? This is the complex and beautifully executed goal that we see in Fallen Legion: Rise to Glory.

Fallen Legion originally came out on the PS4 some time ago in two separate games: Sins of an Empire and Flames of Rebellion. Rise to Glory seeks to bring the two chapters together with a bit of an extra bonus baked in, but we’ll get to that in a moment. In either of the storylines, you begin in the land of Fenumia, a continent in a state of war that comes to a head with the death of the King. For Sins of an Empire, you take the role of Cecille, princess and heir to the throne who is less than enthusiastic about becoming Queen but even less enthusiastic about being usurped from her position. Upon learning that her father’s legacy is being stolen, she sets off to bring the kingdom to order, dodging assassinations and creating better alliances along the way, Flames of Rebellion starts from the perspective of Legatus Laendur, someone who believes that the empire ruined his people and, as a result, needs to take the throne himself to bring about justice. Legatus is somewhat successful, but this bothersome Princess Cecille is trying to reclaim the throne with some help from aristocrats that benefit from the royal class being in charge. You essentially get both sides from the word drop, and both paint some pretty sympathetic pictures for the storylines. However, I do recommend doing Sins before Flames, otherwise you might have a harder time fully aligning with Cecille.

Fallen Legion puts both the hero and heroine on the front lines of combat, but they’re not alone. You’re given the ability to use magic to heal, combat and to summon what are called Exemplars: spiritual personifications of legendary heroes who can fight and die for you. You can have up to three Exemplars at a time, and each can slot into the traditional army role: archer, swordsman, spear wielder, etc. Having a small variety to your party is essential and, as you move along, you’ll gain the ability to summon different types of Exemplars, including some iconic figures that you’ll run into throughout the game. Without spoiling too much, NIS America took the care and time for this game to install five new characters that are exclusive for the Switch release (plus some other goodies) and there are characters than can only be unlocked through certain conditionals. Those conditionals fall into one of the most interesting aspects of this game: the Choices. 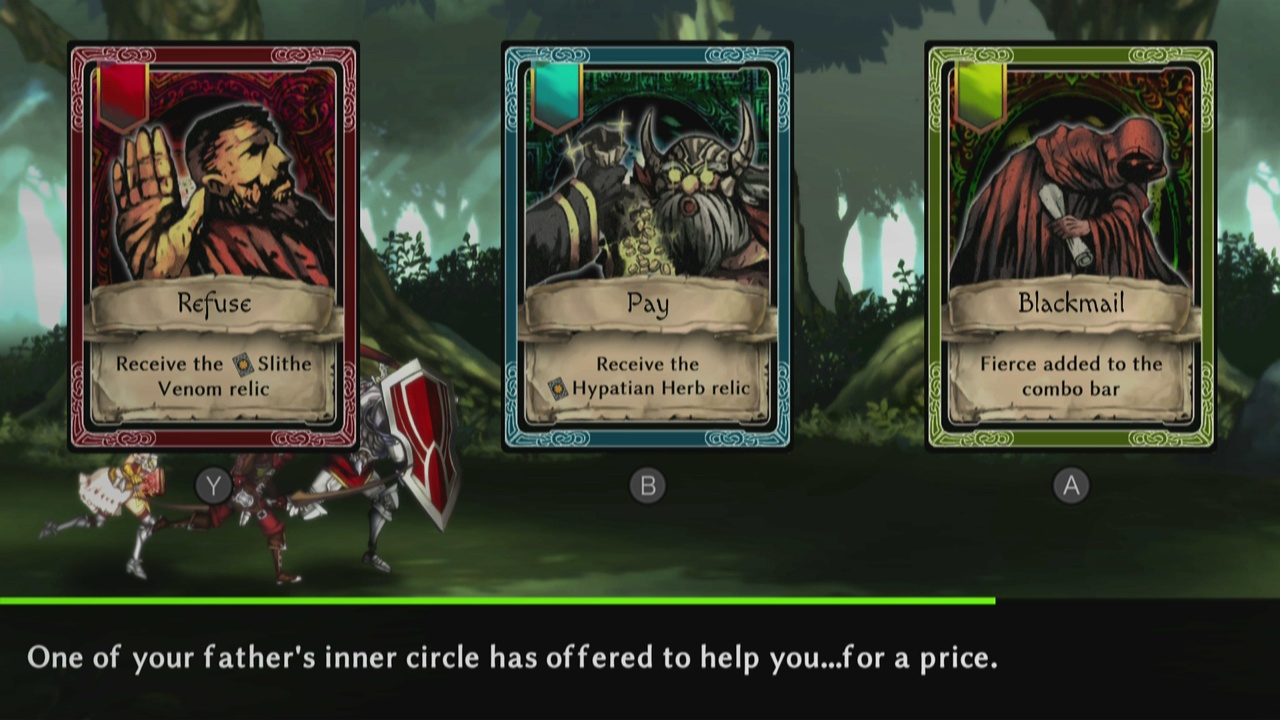 Choices happen in the middle of battle, as each stage will often consist of four to six skirmishes and then one big fight at the end. Choices will be storyline tags that have to do with the world of Fenumia and what’s going on. Maybe you’ll learn about a Prince behaving badly, or the corruption of merchants, or even that peasants aren’t having a great time being poor. You’ll be given three choices as to what you can do, and every single choice affects both the battle you’re currently in with short term buffs and the world at large. There’s a shifting morale meter that the Choices affect, not to mention NPC outsiders will grant or rescind their favor based on your decisions. Choices reminds me a bit of the game Reigns, but with this being a small yet integral piece of the whole instead of the entire game. Making Choices is something pretty damn difficult: I have to decide if I want to win the battle based off of going against my own alignment or forsake everything else in favor of simply winning to fight another day. There were a couple of times where I also felt I didn’t like ANY of the choices, but I had to decide something, because, dammit, that’s how the game works. In any case, it’s pretty spiffy.

When it comes to combat, Fallen Legion really shines in terms of delivery and execution. Far from being turn based or just a brawler, Fallen Legion has a sort of active battle timer that lets players command units to attack in any sort of order, sometimes multiple times by themselves, building up combo meters and potentially unleashing fearsome attacks. While this is happening, your commander (Cecille or Legatus) is replenishing mana to cast both offensive and defensive spells. If all your Exemplars fall in battle, you have a very, very limited time to get your mana back up and resurrect them or you will get stomped to death. However, that won’t be a serious issue as long as you remember how important defense is. New players will want to simply mash the buttons and attack as quick as possible, even after the tutorial, but you’ll quickly learn the virtues of blocking, especially when you can nail a perfect reversal that actually hurts the attacker instead of you. As a result, the player determined to live long and get far will learn when to speed up and when to slow down, rushing and stopping all in one go.

Taken purely from the RPG storyline basis, Fallen Legion is an enthralling tale of honor, duty, loyalty and fealty. What’s really cool is that, from the perspective of a JRPG, things are relatively linear and fast: you can knock out either campaign in under eight hours. However, there’s so much to experience through replay and decisions that a short playthrough isn’t really a thing. The new story branches exclusive for the Nintendo Switch bring new, organic chapters to the stories of Cecille and Legatus, and even add some great details for the minor characters who are voiced but not necessarily playable throughout. Oh, and you’ll definitely want to try and give the game a play in both voices, English and Japanese. While some of the tonality of the English VAs have the same shortcomings as every English dub (a little too comical when it shouldn’t be, too serious when it should), I did enjoy the overall tonality. Though, as a Japanese snob, the original cast is fantastic, especially the voice of Grimoire, a talking book who has a much larger “hand” in the future leader than he(?) lets on. 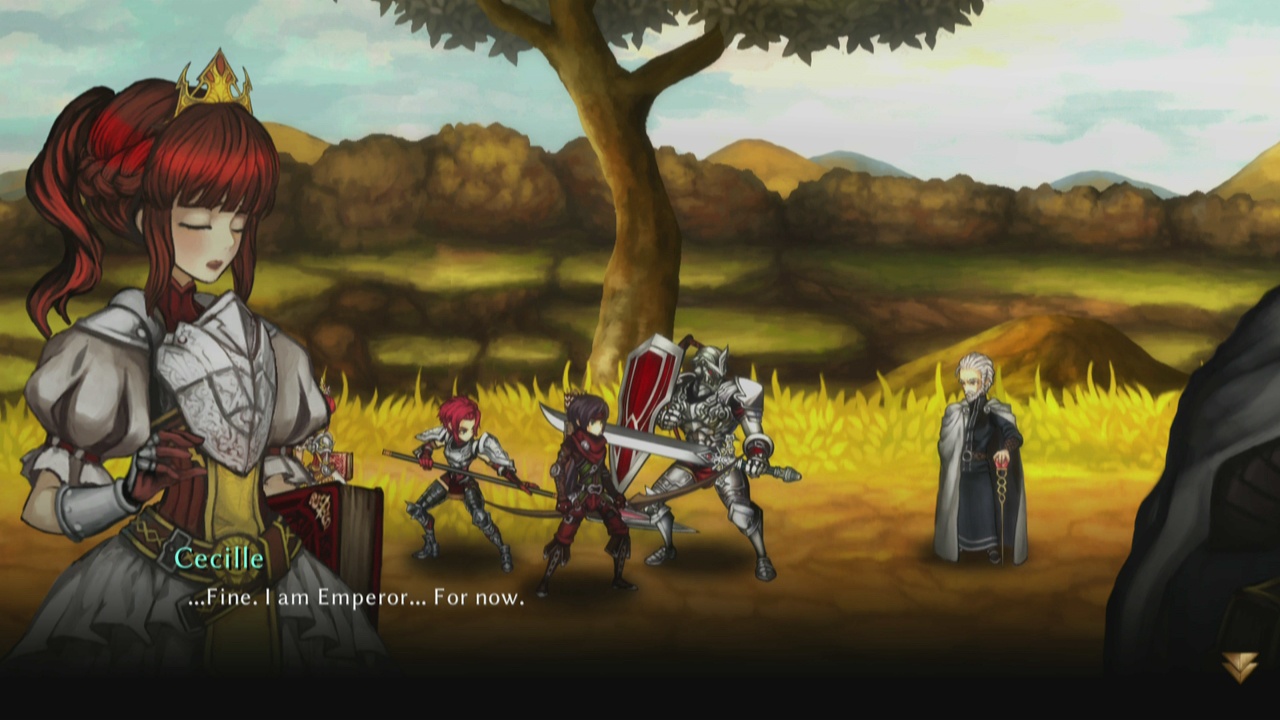 But if drinking in the story on both sides isn’t enough to satiate you, Fallen Legion: Rise to Glory has plenty of extras to keep the game going. Besides the unlockable characters who are carefully hidden throughout the game, there’s New Game+, for those of us who love to simply stomp the ever-loving hell out of whatever is in our way. There’s nothing quite like restarting a new game and having the power of Gods at your fingertips from the get go. Additionally, there’s One Life Mode, a permadeath all-or-nothing attempt where Exemplars can still be revived but the hero only has a single chance to take the throne. Each of these modes also has the incredibly interesting addition where characters unlocked in one game can be played with the others. So, if you manage to get all the way through Flames of Rebellion, do a One Life mode on Sins of an Empire and find a surprisingly amicable cast of rebels ready to help Cecille reclaim her birthright. It’s fun and exciting and actually makes the game almost intriguing to revisit after spending the better part of a very long weekend beating the game.

From start to finish, there’s so much to enjoy about Fallen Legion: Rise to Glory that I’m stunned this game didn’t get more acclaim on the PS4. It’s twitchy enough for the non-RPG crowd, artistic and well written enough for the RPG crowd, the relics are powerful but limited, the gemstones you can equip add but don’t unbalance any of the Exemplars. I suppose the art style might not appeal to everyone, but it ticks so many other boxes that it’s difficult to find someone who wouldn’t enjoy this without getting really nit picky. It runs fantastic and has a digital footprint that’s smaller even than Snipperclips. Fallen Legion is a truly unique play, and one well worth undertaking.