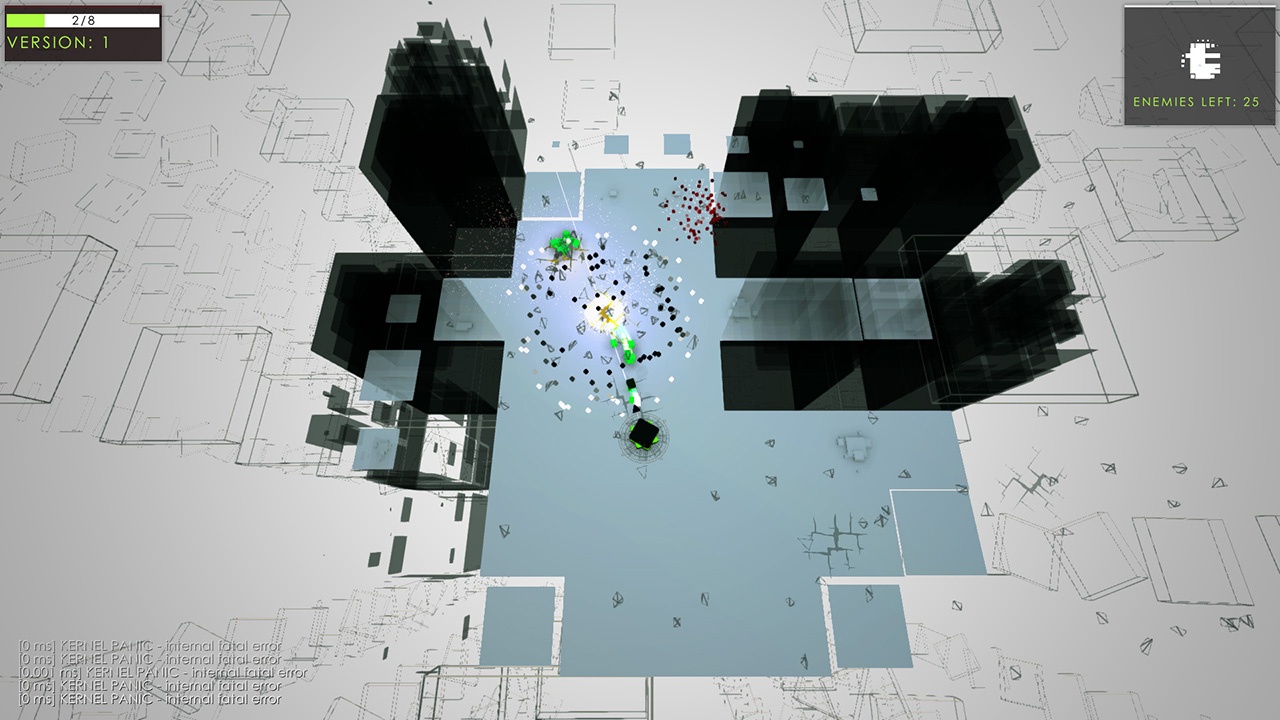 Video games and hackers. The pair go hand in hand, since the birth on computer games there have been hackers in games and games about hackers. Atomine is the game from the Italian-Australian company, Broken Arms Games and is a very creative spin on the hacking genre. This is the first hacking game that I could find to be based off a real historical event in hacking history. In 2011, a computer scientist called Sergey Ulasen discovered STUXNET, a malicious work through Microsoft Windows which effected industrial control systems. STUXNET was the first malware discovered to spy on and compromise industrial systems, and the first to include “Programmable Logic Controllers”. The twist in the game is the fact that you aren’t playing as the hacker but the virus itself, the “protagonist” Atomine.

Broken Arms Games took this concept and made the twin-stick shooter, Atomine. You are put in the role of Atomine, as you battle your way through a computer, learning new tricks to pull out on anything that stands in your way and adapting to the ever random environment, much like a real virus. As you traverse the procedurally generated maps, you will come across a station that allows you to upgrade by getting boosts and equipping new weapons to take out the enemies. Weapons vary from the modest blaster to lasers, and each weapon can be modified to increase fire power, distance and the ability to bounce off walls. Collectables scattered throughout the game unlock new versions of the basic virus granting boosts in movement speed, projectile speed, more spread etc. Atomine breaks away from other twin-stick shooters by offering a Groundhog Day experience, where you find yourself getting to a certain level, getting a weapon boost (or collectible), dying, respawning with the boost equipped and moving on to harder levels. It truly does feel like you are in a computer as well – the minimal colour, electronic music and the polygonal styling that seems to ripped straight out of a hacking movie in the 90s, all fuse to make a visually pleasing title. 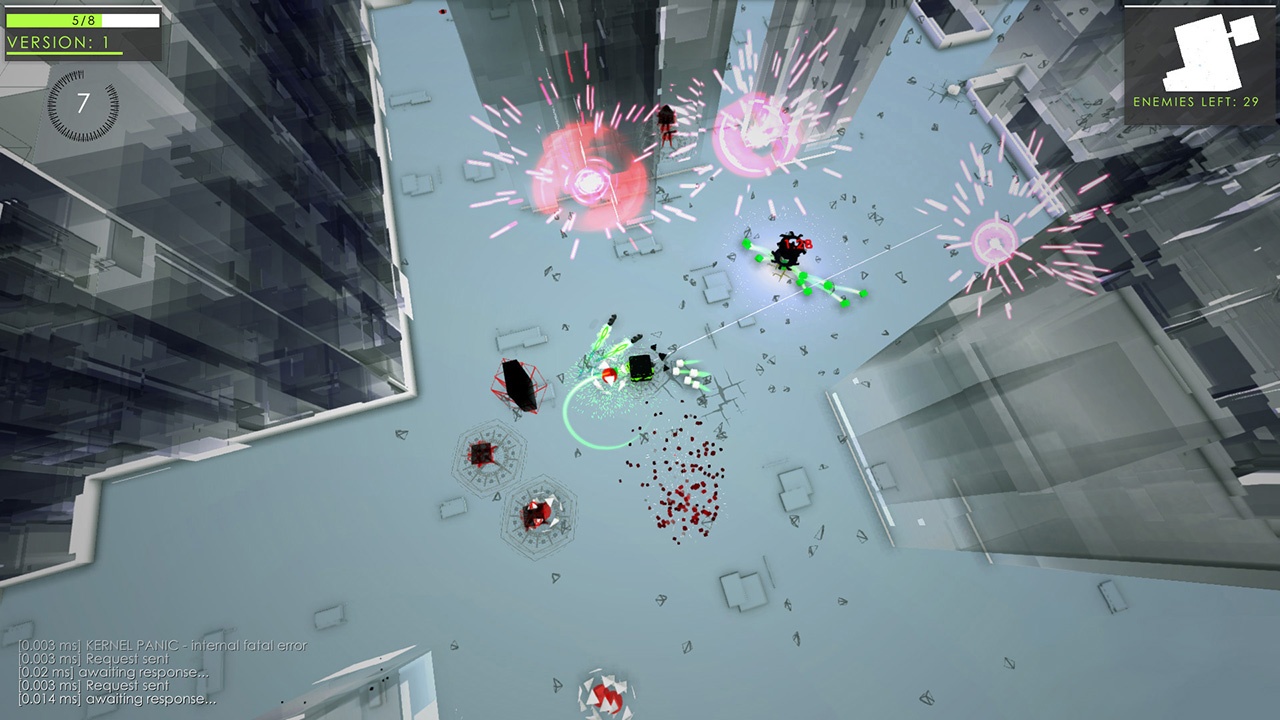 The “rinse and repeat” feeling is a rush at first and the challenge was welcomed, but I found myself getting more frustrated as the game went on. The game throws you into the first level with the only prompt being the thumb stick controls. It took me a while to realise the upgrade stations, and before I realised it was a feature, I was getting more and more frustrated at the difficulty scale from level to level. The randomness of the levels is an interesting idea but I found to be more of a burden, not knowing where enemies were going to be after replaying the levels over and over and over, and the feeling of getting a great weapon out of the gate, doing really well but dying at a boss fight, or, getting awful power-ups and going nowhere fast, ended with me restarting until I got a half decent power-up to stand a chance.

Along with the randomness of the level design and power-ups, the enemies just drop in, in some cases landing on you causing damage. With no visual aid to warn you of the enemies dropping in and some rooms being empty, luring you into a false sense of security, it’s the main feature that struck the biggest nerve with me. I died more to enemies dropping on me, than the bullets they fire. I wouldn’t say I am the best at dungeon crawlers by any means so I just assumed I was just bad and that I could get better… I gave my friend the controls (who was playing The Binding of Isaac on the Stitch, and he fell into the same issues I had, confirming my theory that it is just a lot of luck and not a lot of skill. 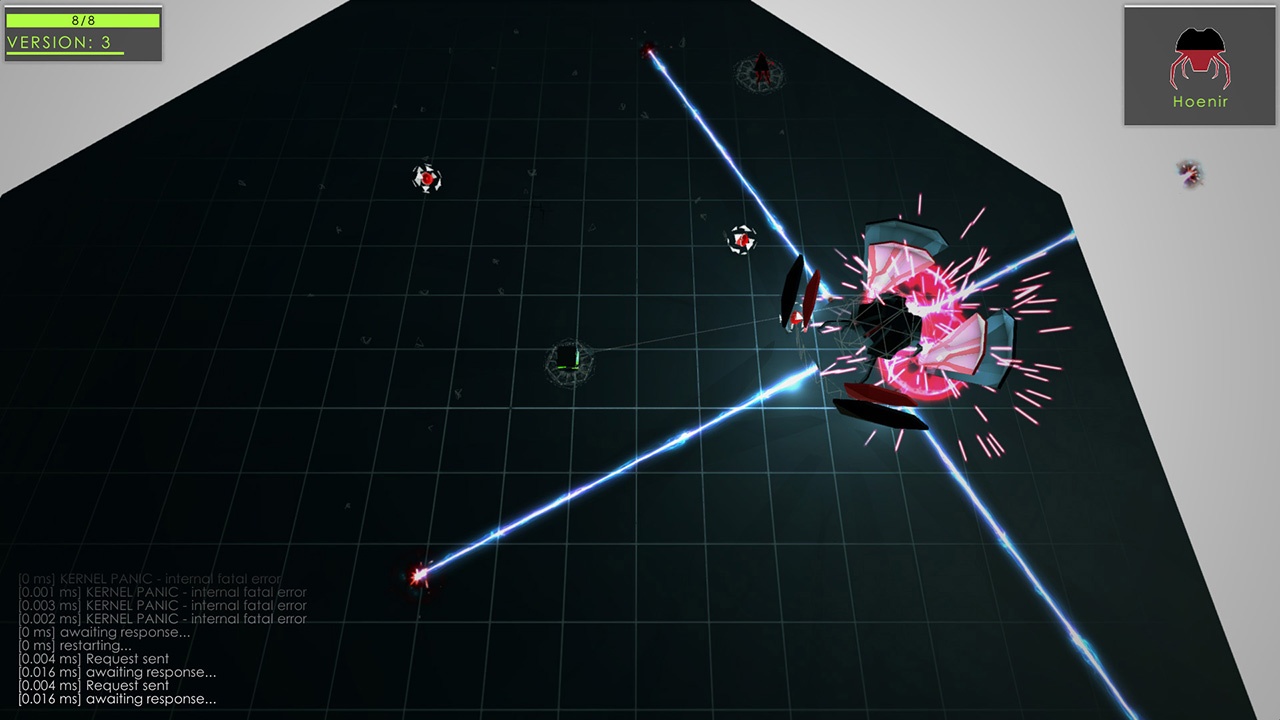 The growth system works quite well (once you figure it out). There are a lot of variations you can have that make the early levels a walk in the park. In one of my attempts I had lightning shooting out in all directions while I had my max speed shooting me around the rooms dissipating enemies in my path. It did feel really good, considering the previous attempts were pitiful to say the least – but that was ONE attempt… out of around 50. That aside, when you do get a good run, the player boosts (not weapon) are very good to upgrade as well. Boosts could be increasing player speed and the amount of xp you receive from each kill. Xp isn’t the only drop from enemies mind you, BitCoin is dropped to form Chips which are used to buy new boosts in the Upgrade Station which once unlocked, will enter the randomness that is the power-up cycle.

Atomine is a unique twin-stick shooter dungeon crawler that has its peaks and valleys, but in total makes for an enjoyable title. The growth system is rewarding, visually pleasing and is a good feeling game to play. The main drawback for me was the difficulty which was fun at first, but became infuriating as time went on. If you enjoy roguelike dungeon crawlers, this game is worth a try. And if you aren’t the biggest fan of the genre, give it go anyway. I found myself going back to it for another crack at the rooms which do offer a great tonne of replayablity which is all you can ask for in a game such as this.