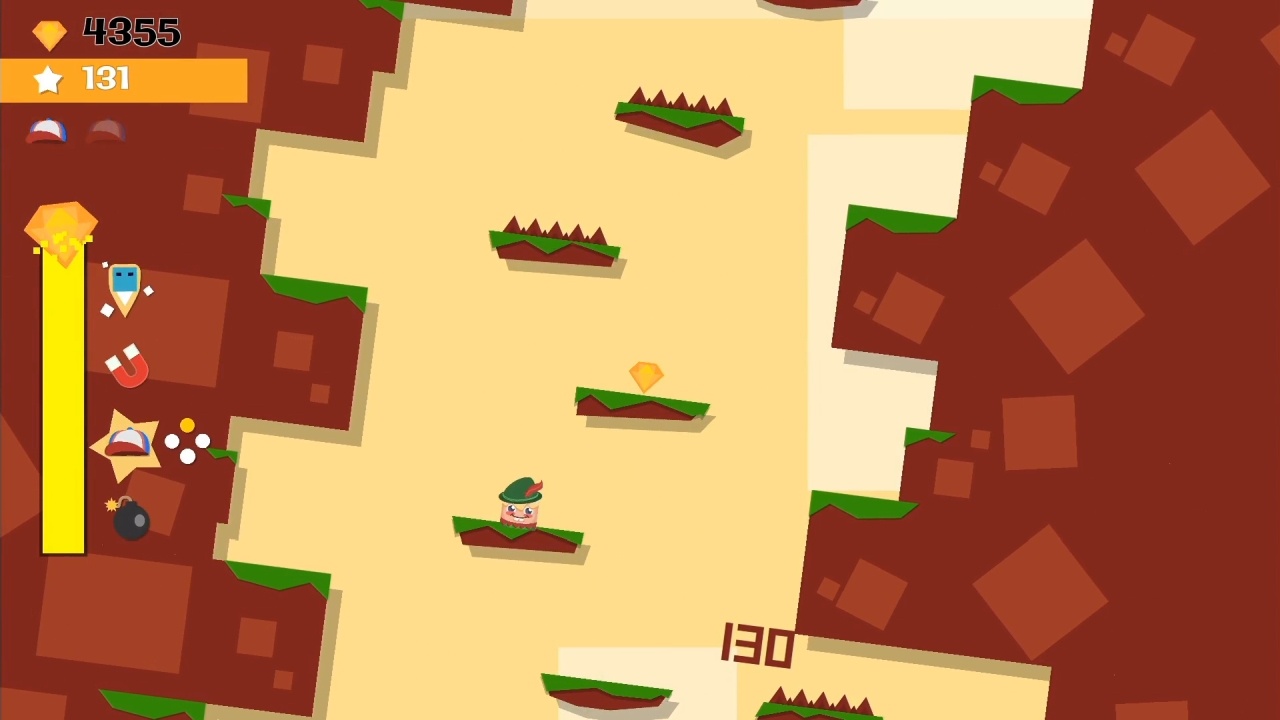 I gotta be honest, I was avoiding trying this title for a long time. So far, QubicGames hasn’t brought the worst games on the eShop (not by a long shot) but they also haven’t totally been my cup of tea. They were…well, they were okay. It’s more of a casual market than I was interested in, and Brawl was, straight up, not what I expected at all. So when I saw that VixaGames had partnered with them to make a mobile game into a Switch title, I was…hesitant. But I’m glad I finally got off my high horse, because there’s some good enjoyment to be had with Jumping Joe and Friends.

As the name might suggest, you play either Jumping Joe or one of his friends, who are all locked at the beginning of the game. Joe can jump. More specifically, joe can jump to the left or the right, and that’s the only buttons and direction you care about. Joe cannot jump down: that’s death for Joe. Joe cannot jump into a wall: also death. Joe can move upwards, left or right, on a nonstop ascent through some ever-changing worlds and backgrounds, hassled by any number of enemies (bats, spikes, cannons, weird dragon things) and helped by various items (hats, bombs, magnets). Joe just wants to jump as high as he can before an oncoming wave of red murder catches up with him: otherwise, Joe could just chill on a single platform forever, waiting for the right moment to jump between slamming walls and other obstacles. That’s all Joe does. Jump. 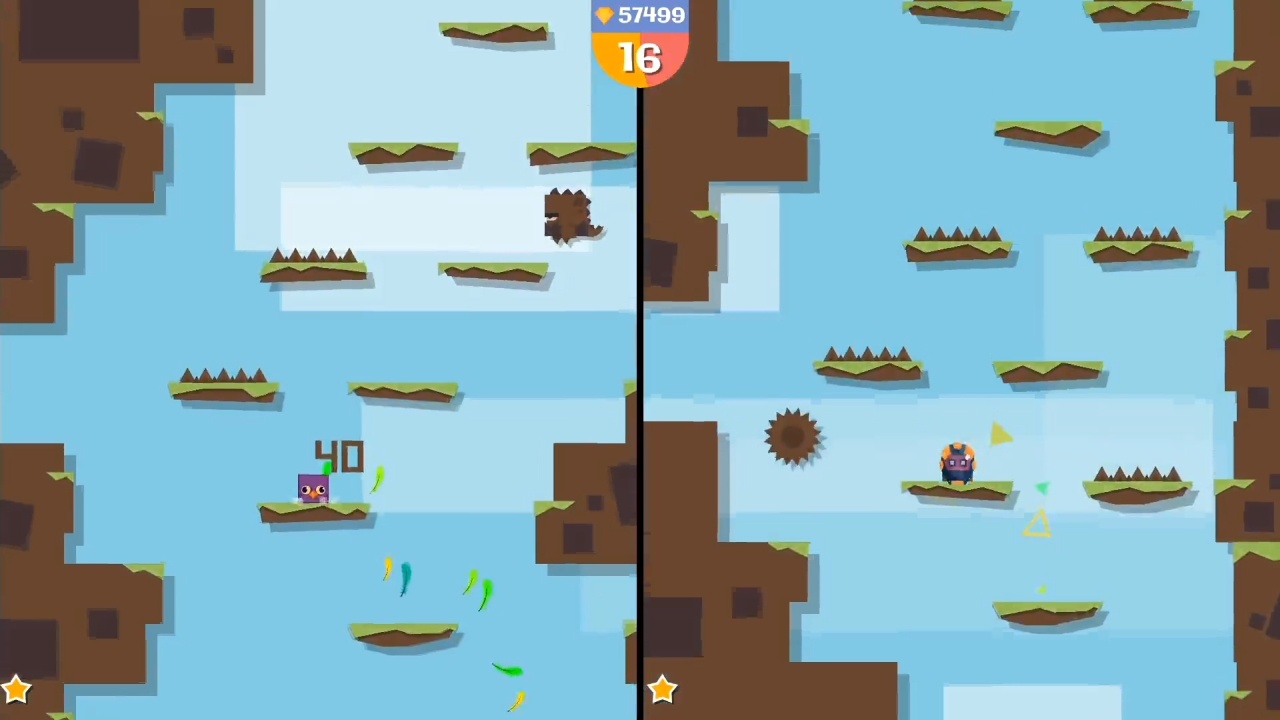 Now, what’s great about this is you figure out the game, the entire game, in about…six seconds. Once you decide if you want to jump with the shoulder buttons or the regular buttons, you’re good to go. You start jumping and run into gems, which you want to pick up. Then you find a bat and don’t want to hit that. Then a crate, and you always want crates: they contain hats (extra hits) or bombs (destroy all obstacles on the screen). Things just keep getting better and more complex the higher up you go, but the basics for the game outline themselves before you even need to think about playing, and then it just gets more interesting from there.

Rather than outline every single element of the game as it changed for me between the five hundred or so of my high score, let’s just cover what goes well with Jumping Joe and Friends. Firstly, the presentation. Sure, the controls are simple, but the graphics are also bright, cheerful and cartoony without being too wacky. Joe is a smug little cube, and all of his unlockable friends have a non-threatening, fun element to them. The enemies never look menacing or anything heavy (though you feel the heat from the rising red tide) and, even when you explode into blood from flying buzzsaws or slamming walls, it’s done so in a funny manner. This also gets paired up with a jaunty little soundtrack that feels like we’re in a Ren and Stimpy short, a little extra slapped in between the main story arc that’s happening.

Additionally, in the single player mode, Jumping Joe is challenging without being, well, unfair. There’s a lot that they throw at you in the course of going up, and it just gets harder the higher we climb. When you run into your first cloud of noxious gas and have the camera zoom in tight to keep you from seeing the big picture, it feels like utter betrayal. But VixaGames doesn’t stack the deck against you. Powerups always seem to appear when you need them, but not right away. When all the platforms are spikes, some spikes will drop away, almost instantly, to carve you a path. As soon as there’s a single way up, you don’t have to worry: you’re going the right way. Sure, you still gotta time things right to not get smacked by air obstacles, and the red line (is that lava?) is coming, but you can do it! 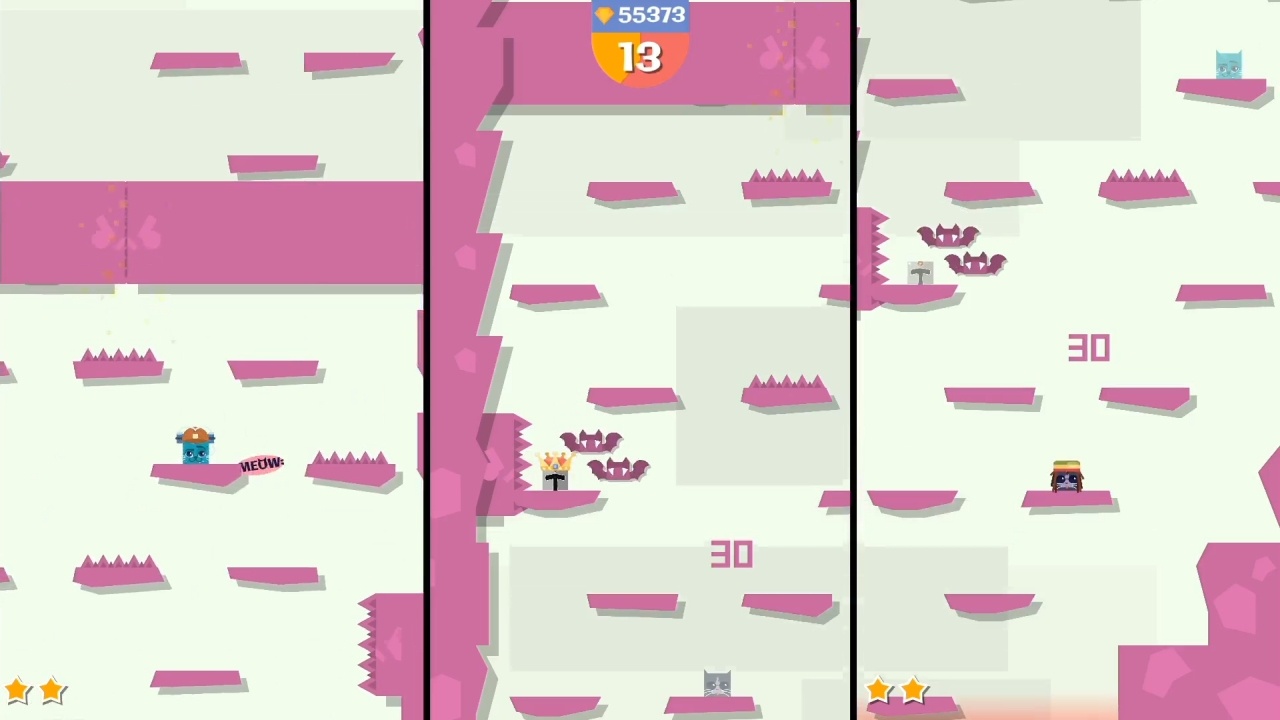 These elements are even more apparent and fun in multiplayer mode, which I highly recommend and I imagine are not present in the mobile version. Players do appear on each other’s parts of the screen, but only as ghosts, not tangible or obstructionist. Additionally, you have a massive cast of characters to choose from for your multiplayer avatar, and they’re all available from the very beginning. Compare this to the five characters you can unlock in single player mode, and multiplayer is where the flair comes in. It’s a great situation, very akin to my time with Tumblestones in terms of “multiplayer competitive but doing our own thing at the same time.” Due to the simplicity of it all, I was able to rope my kids into playing a couple rounds with me, and they got the hang of it immediately. Parents with kids under ten might want to consider this as an easy route for some couch play!

The only downside, in my eyes, is that Jumping Joe and Friends asks way, way too much in order to unlock additional things. Each additional character for single player mode is usually four digits worth of gems. Take into consideration that my first successful run netted me about thirty gems, and it seems quite daunting for new players. Sure, you can get lucky with bonus spins at the end of the levels, but that requires both getting lucky coins and then being, well, lucky. The additional modes are also incredibly obnoxious to unlock through “skill.” Playing as Rocket Bird, getting THREE rocket boosts in addition to my start one, I was able to get 300 feet in….60.22 seconds. Which meant it was less than 60. Rolling the best RNG of my life, and I was twenty two hundredths of a second slow. Or I could just pay 5000 gems. Screw that. As far as I know, Hero mode is a version of the game where you jump and save the President or something. Ain’t nobody got time for that.

But I will say, from start to finish (at least, when I was finished) Jumping Joe and Friends was pretty fun. It’s cool to see an unknown mobile title get a nice polish, a bit of an upgrade, and then launch on the Switch for a reasonable price. This is also one of those games that really nods towards a set of JoyCons becoming two players worth of controllers, because it’s just as easy to use one stick instead of two, and you’ll still do about as well. If you’re at all interested, I say jump on in: for under five bucks, Jumping Joe and Friends is a decent, fun little time sink.