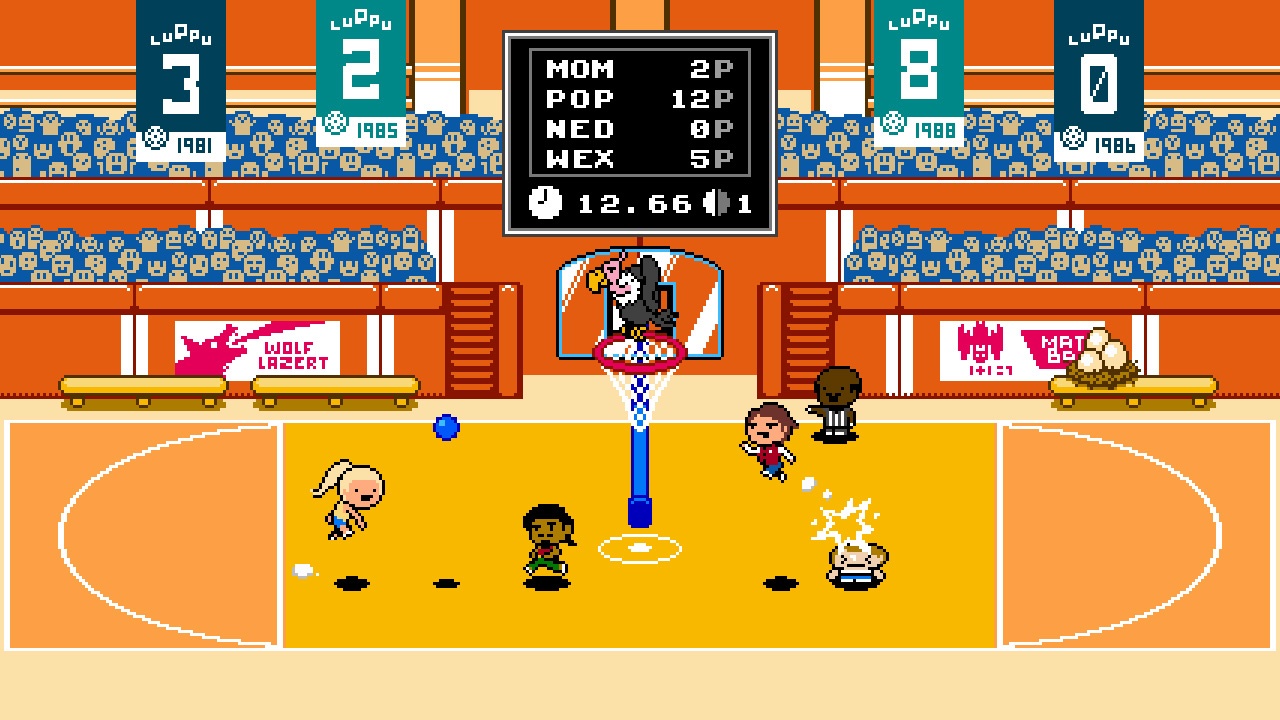 You know, I’ve lost count of how many joysticks, or joypads, I’ve broken over the years due to the button-mashing mechanics of the variations of Olympic-styled games that used to be so popular. It can’t be denied that their popularity has dwindled over the years, with arguably Mario & Sonic being the last successful iteration of its genre that garnered some sort of support. Although they cost me a fortune in replacing my broken controllers, it was always a style of gaming that I enjoyed playing. Well now it’s time to re-live those days, hopefully without any breakages, and go for gold with Super Sportmatchen, a new competitive title that sprints a finish onto the Nintendo Switch.

Developed by Kaj Forell Video Game Brand and published through DANGEN Entertainment, this retro-style sports sim follows in the footsteps of such classics as Konami’s Track n Field and Hyper Sports in its presentation, but contains some surprising additions to its sporting events. Played solo against AI competitors or over local multiplayer for up to four players, you compete over a series of disciplines; each one selected from a roster of ten different events. Depending on how you score, or what position you finish the event in, you are awarded points that tally up on a leaderboard to ascertain who the overall world champion, upon their completion, is.

Whether playing solo, or with friends, you start off by picking a name, albeit one that is limited to three characters, you then choose to either play a series of five events, Sportmatchen, or compete over the whole range of ten disciplines, Super Sportmatchen. Depending on your choice, you then select which sports to pick before selecting an icon to represent your character. Despite these options however, your choice of competitor is woefully thin, with only a handful of characters and countries available to choose from. It doesn’t detract from the overall experience of the game, but does seem an odd inclusion to limit the availability of whom you represent; after all, I should imagine that most of us prefer to represent the country from which we reside in. Nevertheless, once set up, you can begin competing in all manner of competitive sports. 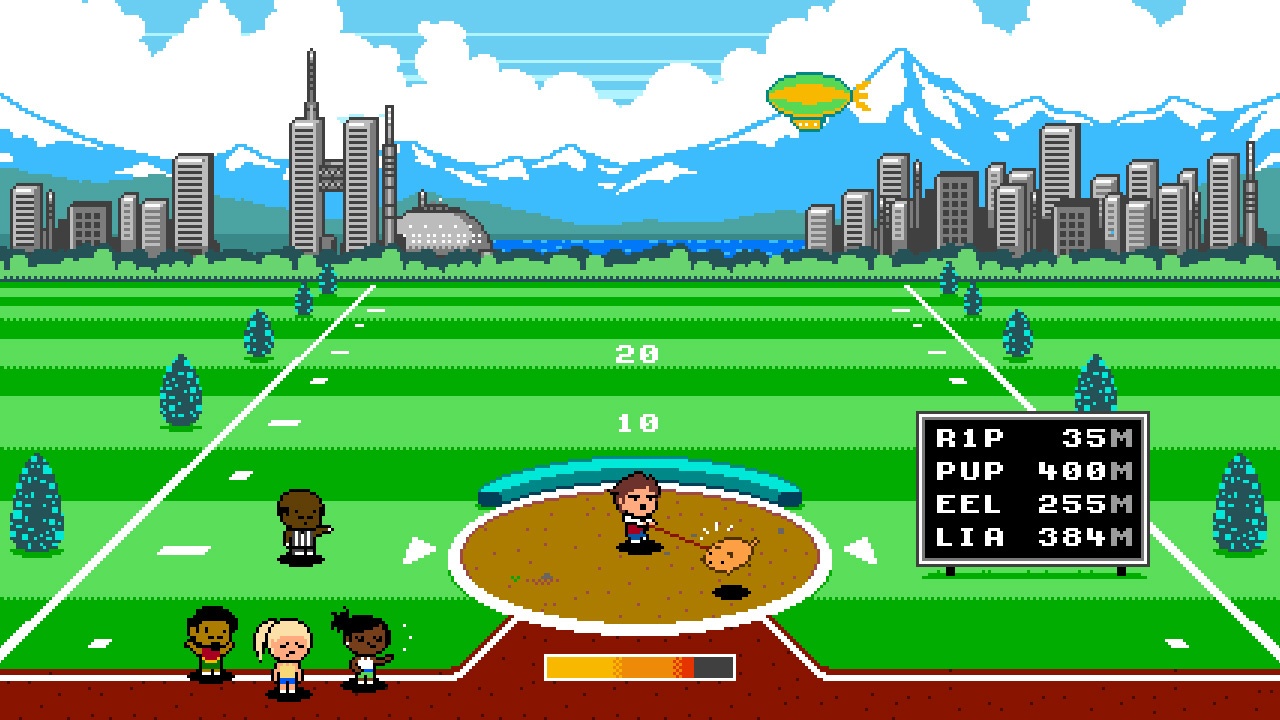 As well as a selection of relatively straightforward and well-known sports, such as the 100m dash, your choices also cover a range of rather bizarre disciplines which come in the form of pillow-pushing, bouncy-hopping, ball-tossing and even bird feeding. Although strange, they do add a bit to the game’s charm, as well provide a different element of sporting that may not necessarily be familiar to people who have played similar games in the past; thus presenting an even playing field, especially if playing against friends. However, if playing solo, then these events can take some practice in learning their mechanics but once you have them figured, can provide some genuine entertainment.

Whatever disciplines you play, each of them control in various ways. Events such as the 100m dash or 180m Hop-Boll, a hurdles-style race, follow in the same mechanics of old; namely the rapid-fire pushing of buttons A and B. However, get your timing wrong and you’re competitor stumbles and falls. Other events such as river dodge, a kayaking race, simply requires you to dodge left and right as you switch lanes to avoid obstacles that float in your way. Disciplines such as pillow push or ball toss, however, require a bit more thought to their mechanics, choosing angles, attacks, parries and strength to be more successful in their competition.

However, or whatever, you decide to play, the presentation of Super Sportmatchen very much follows the same styling of the retro games that came before it; and it does so particularly well, often generating reminiscing values of many a night gone by when competing for glory. Everything from the pixelated graphics to the 8-bit sound effects, including muffled speech, is in here, but it’s all been done to such good effect that it simply shines, despite its retro-inspired roots. Player animations are particularly well-done too, despite their pixelated appearance. 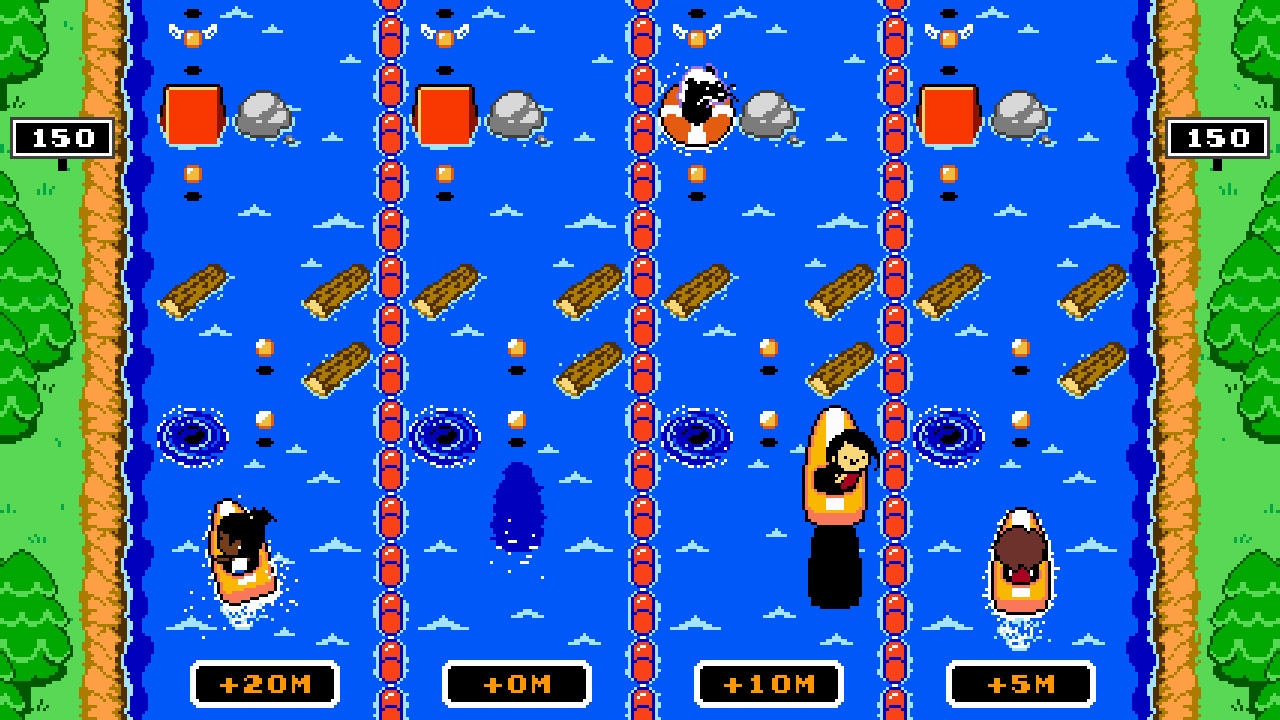 Although playing solo can provide a relatively fun experience, its true magic lies in its local multiplayer element; where you and up to three friends can compete against each other with one joycon each. The simplistic nature, yet technically challenging, controls of some of the disciplines suit the use of single joycons well and, I have to admit, their design feels suitably stable when button-mashing for position during the 100m or angle-selecting for the ball toss; with a bit of luck then, I won’t need to fork out for a replacement pair, or three or four!

The competitive nature and quirkiness of some events, really do produce a party atmosphere when playing with friends; often producing fits of giggles at the mishaps from other players or the joy of scoring baskets when no-one else has quite got hold of the mechanics yet. It’s this element alone, which has helped Super Sportmatchen achieve its score. Although playable and enjoyable in a solo capacity, the toughness of competition from the AI can make it a daunting affair; at least, until you have mastered each discipline and can put up a good fight. Something that drastically increases the fun you can have with this title when playing alone.

Overall, Super Sportmatchen is a charming, quirky little title that contains an abundance of playability; especially if you’re a fan or seasoned pro of games such as Track n Field and Hyper Sports. If you are, then its presentation will bring a smile to your face as you re-live past glories from the days of old. However, if you’ve never played any of these arcade classics, then this title still possesses enough charm to attract attention; especially if friends are watching you play as they’ll soon be itching to join you for some multiplayer mayhem; which is its saving grace as there aren’t many other games on the switch that can match its competitiveness in this respect. Although easy to pick-up-and-play, it’s fiendishly difficult to master, but this all adds to the playability of the title as you learn the ropes and take satisfaction in being an able competitor. With leaderboards for each event, as well as an achievement system, there’s a lot here to draw you back, whether it be for personal bests or to get that elusive achievement. For what it’s worth though, what this game does contain is a bundle of fun and isn’t that the overriding reason of why we all play games? If so, then this is a game that will provide; especially if playing with friends.