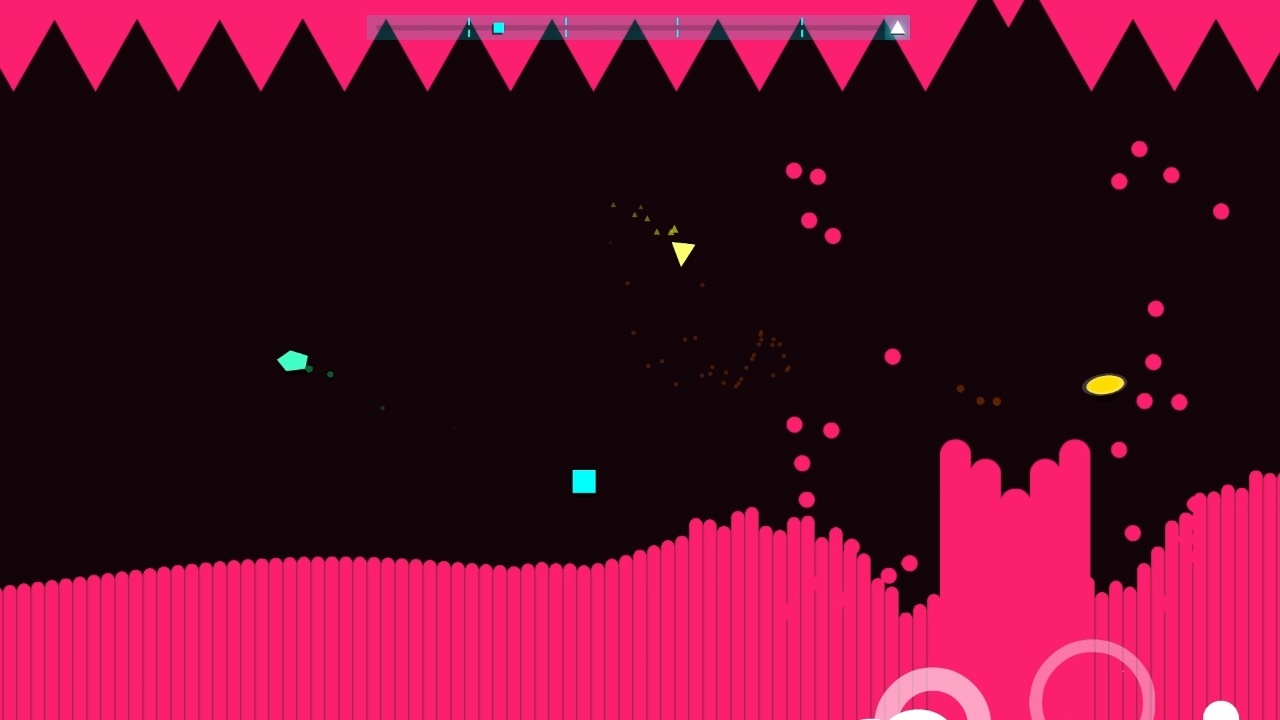 There’s always a chance to find out about new things that change your life. Eight years ago, I scoffed at the idea of having Internet on my phone (I have a computer for that!) and now I have to immediately buy more data if I run out of 4G before the monthly reset. Video games are no different: every few years, Nintendo manages to show me something I had never thought of in any capacity but now I simply can’t live without it. That was my 3DS, that is my Switch, and, every so often, that’s a new game that changes my perspective. That was not Breath of the Wild: giant games like that tend to lose me because of how large they are, which is also why Skyrim is a hard pass. But, as it turns out, I needed a new take on the music game. I needed Just Shapes & Beats, because it just fits perfectly into my heart.

Berzerk Studio brings us this game that doesn’t technically have a story, and yet it does, because the story mode is insanity. Basically, you are a shape. A square, to be precise, and you’re just trying to live your life, zipping around and enjoying music. Suddenly, some kind of insane, hellbeast of a backbeat bursts to life, fully aware and full of hate, and tears your gorgeous, idyllic world to shreds. Now you’re adrift in a sea of monstrosity, and you need to rally your friends and get things back on track. Because when the bass drops and it murders everything, that’s a musical issue that hasn’t been properly addressed.

It’s been a little while since I’ve thought of Thumper, which is one of those games that created a new style of gaming that I hadn’t experienced before: rhythm violence. But that’s what came to mind when I played Just Shapes & Beats, because this, my friends, is rhythm survival. Basically, each stage is this beautifully crafted song (either chiptune or EDM) that creates a gorgeous, ever-changing visualization pattern. A pattern of destruction and death that will kill your little square dead in just a couple of hits. You get hit enough times and you “die,” respawning at the last checkpoint you crossed. Die a couple of times and it’s game over for that track. You don’t want that. No one wants you to fail, least of all the mean teacher from eighth grade (ok, no, she definitely does: don’t give her the satisfaction). The only way to keep alive is to keep moving: weave and dodge in between the red visualization shapes as they appear, using split-second cues to let you know when something is about to go south and knowing when to dash. You have an unlimited dash amount, and you can invincibly dash through red beats, but be warned: when you come out the other side, if your dash ends inside a red thing, you’re going to HURT. 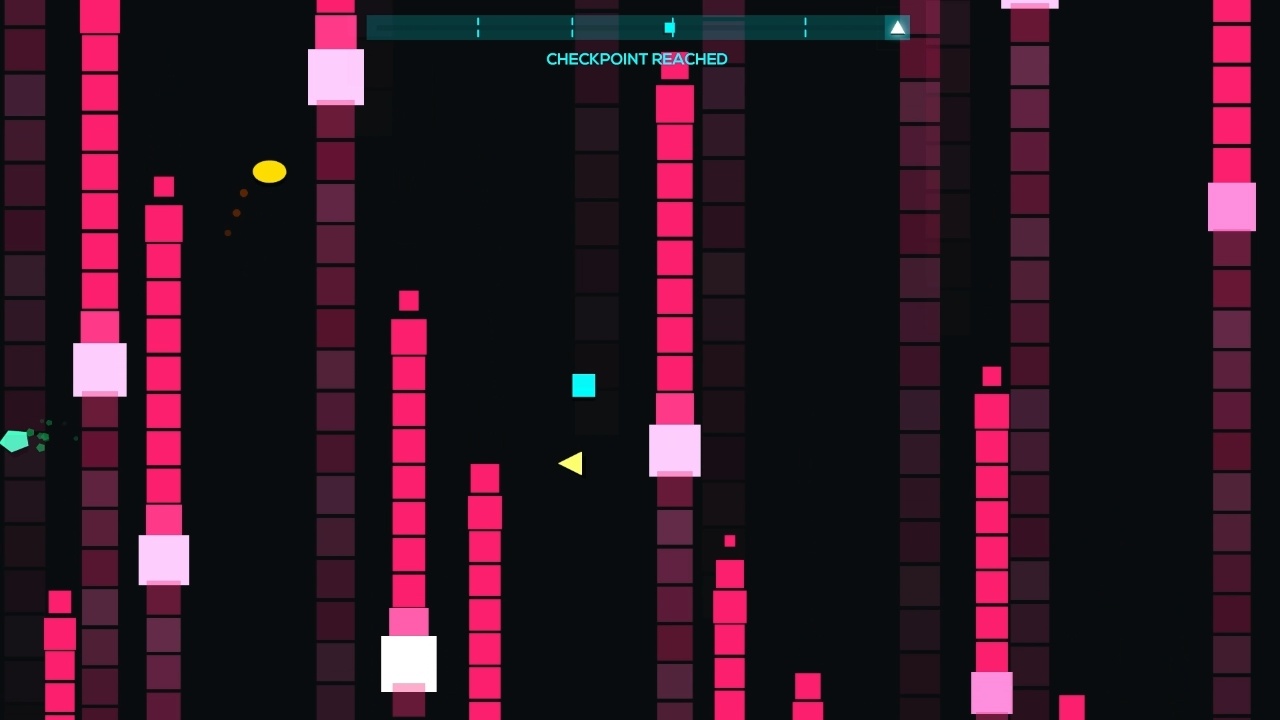 The central nervous system of every rhythm game is the soundtrack, and Just Shapes & Beats has some of the best music that I’ve heard on a game in a while, mostly because I am a huge chiptune fan. So to see big names like Chipzel and Bossfight (okay, big in my world) show up so early, I actually got giddy. And then Danimal Cannon? Are you kidding me? There is so much amazing music on here, and it fits the mood and elements of the game perfectly. You have to understand that the dubstep features and the succinct drop in and drop out of the beats works so incredibly well with the concept of the game. By having things build and fade, and suddenly burst apart, the sounds themselves feel like they were hand crafted for this game. Oh, wait, some of the songs actually were? Well hot damn, looks like we’ve got ourselves a riot on our hands.

Additionally, the gameplay of Just Shapes & Beats takes everything that’s great about bullet hell dodging and makes it even better by stripping away your ability to do anything at all. Like, seriously, at all. Your objective for each and every level, from start to finish, for all 30+ songs that you may experience, is to simply not die. You start to live and breathe for those checkpoints, and you feverishly glance between the screen you’re on and the progress bar that appears that the top. You quickly get super twitchy about your gameplay, making agonizing, millisecond decisions about whether slow, small movement or a fast dash is what will keep another corner of your little square intact. I’ve seen and heard people that just zip about the screen with never-ending dashes, and they break my brain in half on how they have the timing and location down to such precise areas already. I feel like I spent such a long goddamn time just getting through the first couple of songs, and then the fakeout credits rolled, and I got STOMPED by the second “bossfight” of the game.

Oh, I suppose that’s important for players to know: some things turn into, and I mean this in the best way, utter bullshit. The hazards and pain of Just Shapes & Beats rival some of the biggest “I can’t believe that just happened” moments of recent gaming for me, and I played through I Wanna Be The Guy. You can get into the groove and have amazing rhythm, but you can never be sure WHERE the beat will drop, only when, and it will dominate the screen, leaving a postage stamp of black where you can safely hide for a second. But Just Shapes & Beats knows what it’s doing: these moments of torture often coincide with a tantalizing shift in the music, and players are too busy enjoying the groove to really grasp how angry they should be. The fact that most boss songs have zero checkpoints and the game turns into straight up mania pretty soon should be a glaring error, but it simply isn’t. The dev team knows how hard it is, and you can turn on casual mode in settings to get double HP with zero penalties. Other than knowing you took the handicap to survive. I took it, don’t judge me. 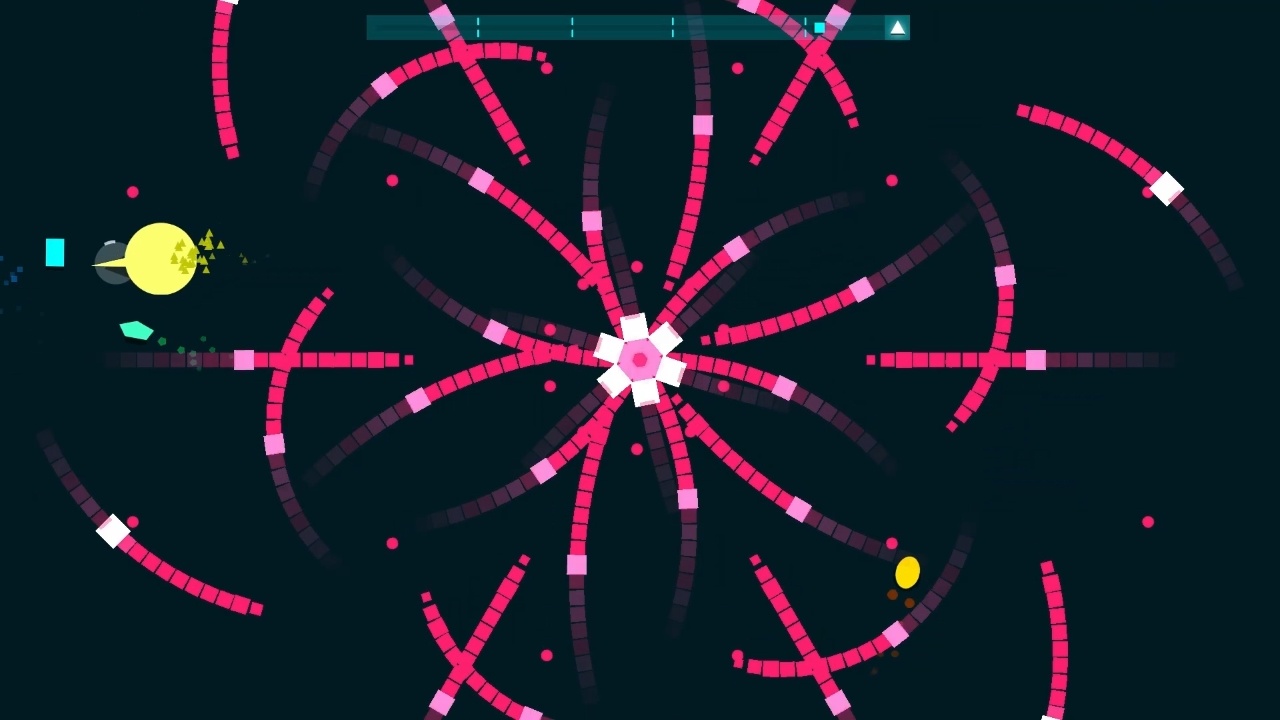 Once you really know your stuff (or think you do), then it’s time to look into multiplayer. Just Shapes & Beats works best when you have multiple people all trying to stay alive at the same time, and I gotta hand it to Berzerk Studio for pulling out all the stops with the co-op. Couch co-op, check. Online multiplayer, check. Local multiplayer with multiple Switches, sure thing. Randomly pairing up with strangers to run online gamuts? Frigging check. I don’t really like doing multiplayer unless it’s local, but having randomized selection of other people willing to get beat to death by beats felt like a solid swing and a good move. After all, this game isn’t going to be for everyone, and letting you pair up with strangers means all the gloating of doing great without any of the feeling bad your friend didn’t.

Lastly, the party mode is cool in theory, and I think it works best as simply a soundtrack generator with awesome visuals. I dig the music and the effects that come from it, but I can’t necessarily see my friends wanting to break away from conversing or dancing in order to play, but, then again, my friends are all imaginary and a bit stuck up. But having an immortal version of the game on nonstop play (or make your own playlist of favorite tracks!) is a smart move, especially when you want to show off your skills but your skills are actually pretty bad but the cute boy doesn’t know that you can normally die in the main game. Whatever, what he doesn’t know won’t hurt him.

Just Shapes & Beats is a stellar, unbelievably engaging rhythm game that brings edge and addiction to the Switch. Players who have even an inkling of interest in good chiptune and danmaku are going to find this to be such a fantastic game, and the fact that it’s the same price as the Steam release is just the icing on the cake. If you are even a little intrigued, you simply must pick up Just Shapes & Beats.