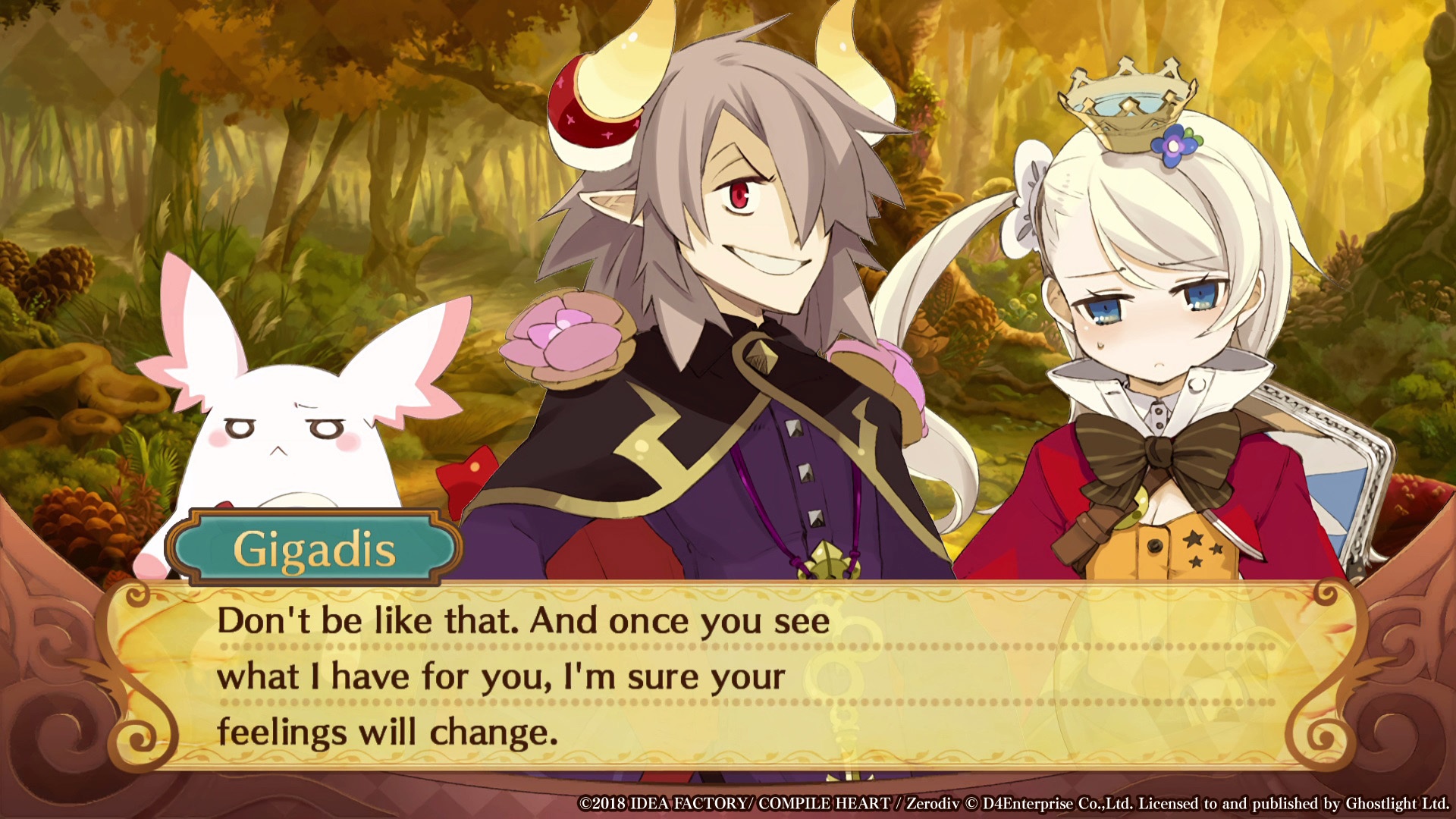 Sorcery Saga: Curse of the Great Curry God was initially released on the PlayStation Vita back in 2013, but for some reason, it took about 5 years for it to finally arrive on PC. Now, the question is, was it worth the wait?

Well, first and foremost, for those that have no idea of what this game is all about, let me present it to you. Sorcery Saga is at its core a dungeon crawler with a visual novel touch to it, which is something that Idea Factory certainly has a good record of doing. Much like other games from the studio, Sorcery Saga is also divided into two major different sections. There’s obviously, as mentioned previously, the visual novel side of things, that’s used to tell the story in a visual novel fashion, with most of the dialogue being voice acted, while the core gameplay focuses on actual combat which, in this case, takes the form of turn-based dungeon crawling.

The game puts you on the shoes of Pupuru, a young girl that finds herself involved in a quest to search for the ultimate ingredients that will allow the creation of the legendary magic curry in order to save her beloved curry restaurant from going bankrupt, thanks to the recent arrival in town of the most notable chain of curry restaurants that is stealing the clientele. As usual, things don’t really go according to plan, as you’ll face obstacles along the way, meet new characters, and try to find out who’s really on your side. Personally, I feel like the dialogue and the characters present pretty much what you’d expect given the studio and the publisher’s record, a combination of silly humor and adorable lines that are just enough to keep you going through the rather long conversations. 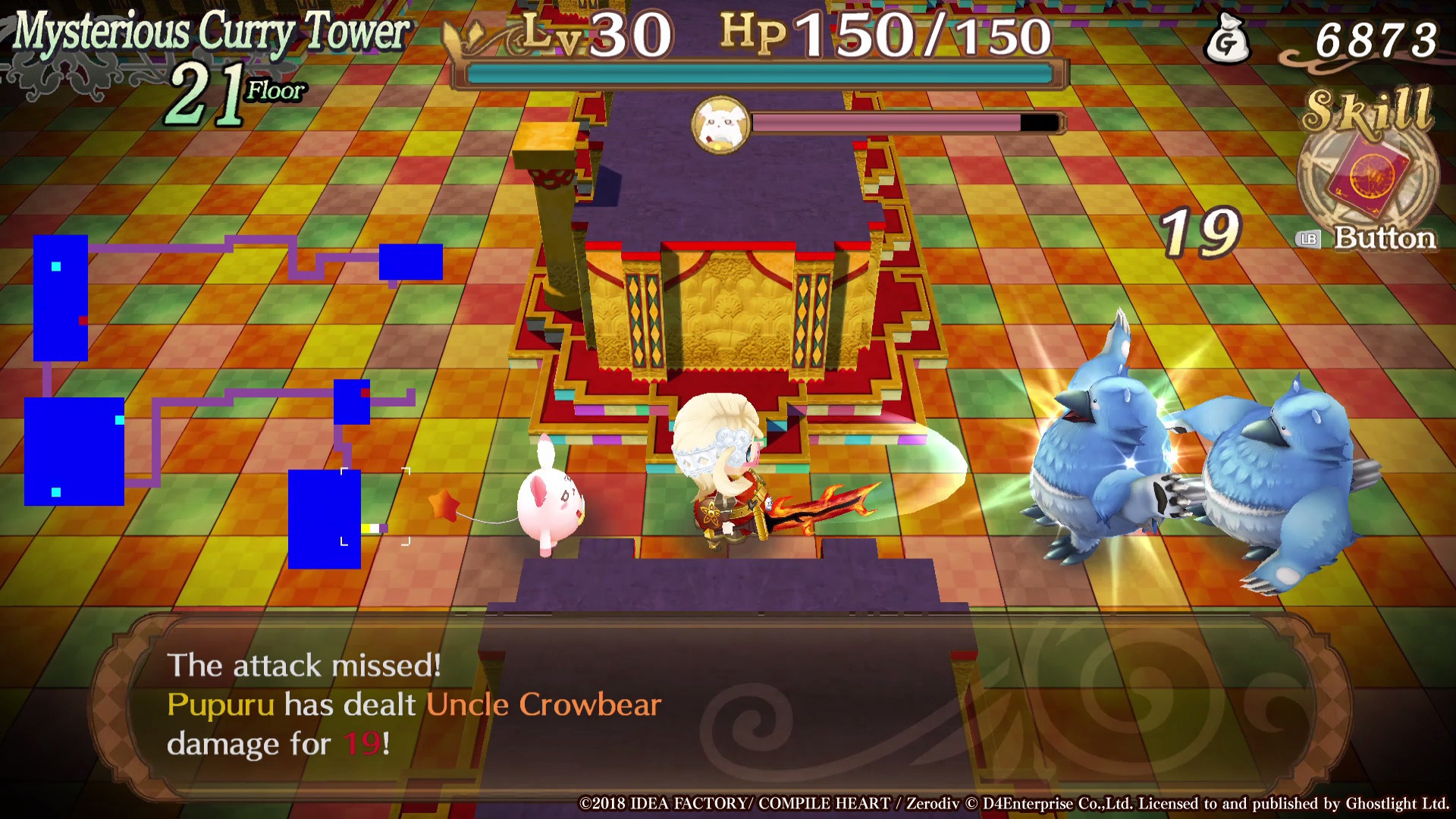 The premise of the game really ties neatly into the dungeon crawling aspect, given that you’ll be spending a lot of your time clearing out dungeons while searching for ingredients for your recipes, as well as shields and weapons that you can equip and upgrade in order to make your job easier. There is a surprisingly decent amount of different types of gear that you can find, and some even have some special bonuses, but you’ll also come across all sorts of consumable items that can make your life a lot easier.

The way that this whole process works is pretty straightforward, as everything starts with you selecting which dungeon you want to delve into from the world map, with some dungeons granting you specific item drops that others do not, so there is also some inherent degree of grinding in the game in case you’re really chasing something special. Once you’re in, that’s where the fun kicks in, at least in theory. The movement system is grid-based with simultaneous turns, meaning that every time you move or attack, so do your enemies. You can move up or down, left or right, and diagonally, pretty much like in any traditional roguelike, and attacking also works in the same way, in the sense that all you need to do is move towards the enemy and you’ll automatically attack him.

While there are two types of dungeons, some of which are hand-crafted and others which are generated randomly, the way that they’re designed allows you to take advantage of the narrow corridors in order to funnel enemy groups into a single line, so that you can deal with them more easily and avoid getting overwhelmed by a whole bunch of them in a room. Nonetheless, there are plenty of times where you can suddenly find yourself surrounded by a group of enemies and have no means of escaping that situation. It’s in these cases that the game doesn’t really make that much sense.

If you die while you’re exploring a dungeon, you’ll return to town but you’ll lose any items that you had, except for the ones that you had equipped. Still, I’ve had times where I’d die and return to town without my weapon and shield, and I’m pretty sure that the game doesn’t provide an explanation as to why this happens. Likewise, I’ve also had instances of random items just disappearing from my inventory for no apparent reason while I was exploring dungeons. To be perfectly honest with you, I have no idea if these are part of some hidden game mechanic or if it’s just a bug. With that said, I’m also a bit confused as to why your level always resets every time you enter a new dungeon. This can really become frustrating if you find yourself in a situation, where you meet an enemy type for the first time, and you get instantly nuked. 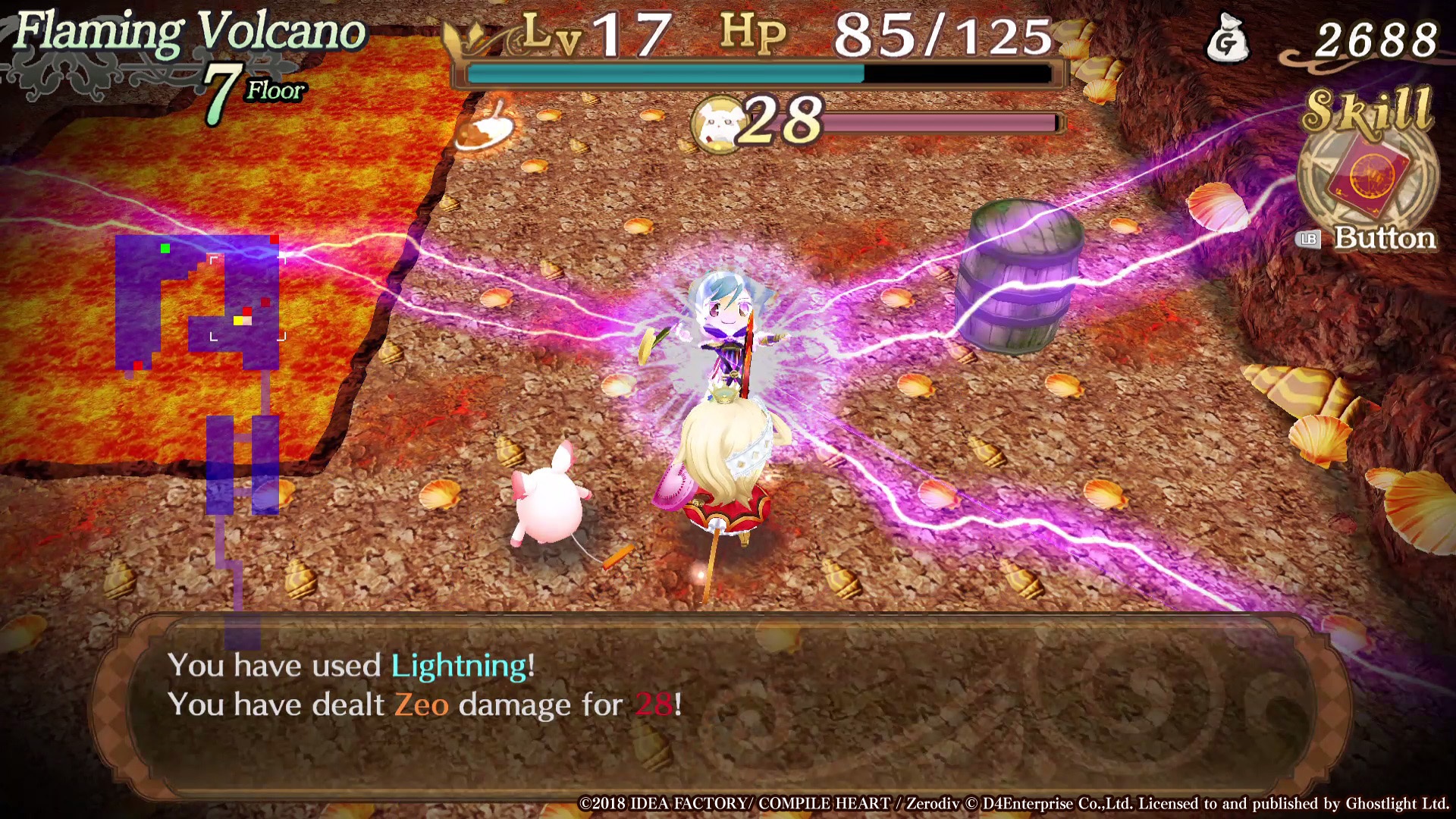 One of the things that I tend to find annoying in this type of games, is the fact that the player is fairly limited in terms of how often they can save their progress. Fortunately enough, besides being able to save your game whenever you’re in town, Sorcery Saga also allows you to temporarily save your game while you’re in a dungeon, which will send you back to the menu screen and once you go back to the game, that save will be gone, hence the temporary designation.

Besides what I’ve already mentioned, getting caught up in the midst of a group of enemies with no means to escape, and losing your loot for no apparent reason, there are also two other things that really bother me when playing this game. The first one is the fact that I can’t really understand why you can’t use the mouse to issue move orders like in any other turn-based game, it just makes it extremely weird to move diagonally by having to press, for example, the A and W keys at the same time. It makes no sense that a PC game does not have proper mouse support for moving your character, it just makes everything feel extremely clunky, and the menus definitely do not feel like they were designed with the PC platform in mind. The second issue that I have with the game, is that the combat is really dull, you have your basic attack and a few abilities that you can learn along the way, but other than that that’s pretty much it, there’s barely any strategy or thought involved.

At the end of the day, Sorcery Saga doesn’t really feel like a good game, but that doesn’t mean that it’s a bad one, I’d just say that it’s slightly above average. There are a few issues with the English translation here and there, but nothing too major that should prevent you from understanding the story that the game is trying to convey. The combat and dungeon-crawling are pretty straightforward, but that also works to its own detriment. The game does provide some decent good fun, but there’s also no fun in instantly dying to some random enemy that appears out of thin air. Ultimately, the game isn’t that expensive, and the two hours of playtime that Steam grants you so that you can decide if you want to keep a game or refund it should be more than enough to decide if this is something for you or not. As for me, I think I’ve had enough of it.