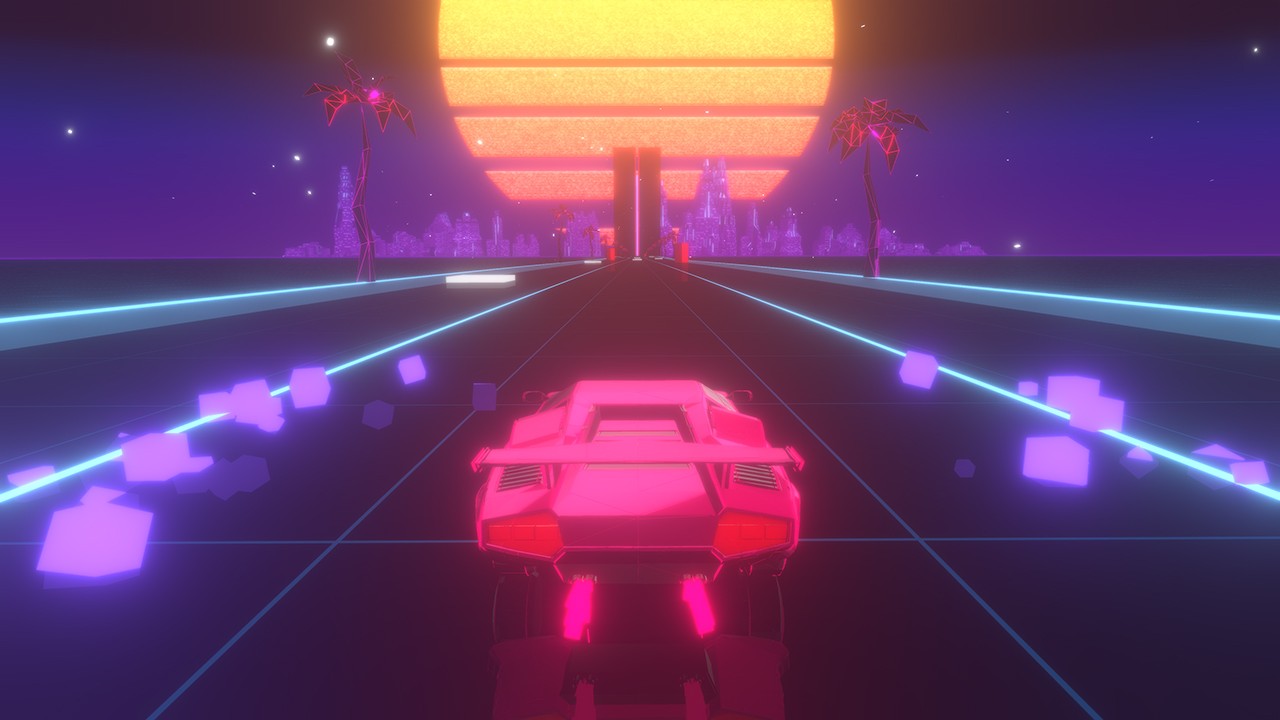 The concept of Music Racer isn’t too foreign to the rhythm game genre. You drop in a choice of 12 different stages which are all uniquely designed and visually vary from each other. However, no matter the choice you make between them they all play exactly the same. The way that the game is played is that you choose your type of car amongst a variety of types and you race along 3 lanes while collecting beats to the music you’ve chosen. Most of the music choices are mainly in the electric techno-pop genre. While collecting beats there are obstacles for you to avoid and depending on which game mode you are playing, you can either end your beat combo or cause a game over.

Unfortunately, some of the song choices don’t sync with the beats as well as the others and can kinda throw you off a little bit. Along with the out of sync beats there’s a bunch of hills and turns on each stage which adds to the excitement of gameplay, but the issue with them is that most of the time they take up the whole screen which prevents you from seeing the beats that you need to collect. Even when I do miss a couple of beats, it really doesn’t bother me because I’m fully invested in the course aesthetics and I’m too busy listening to the music. The only thing that you’re missing out on is the chance to get more stages and vehicles using the beats that you collect. 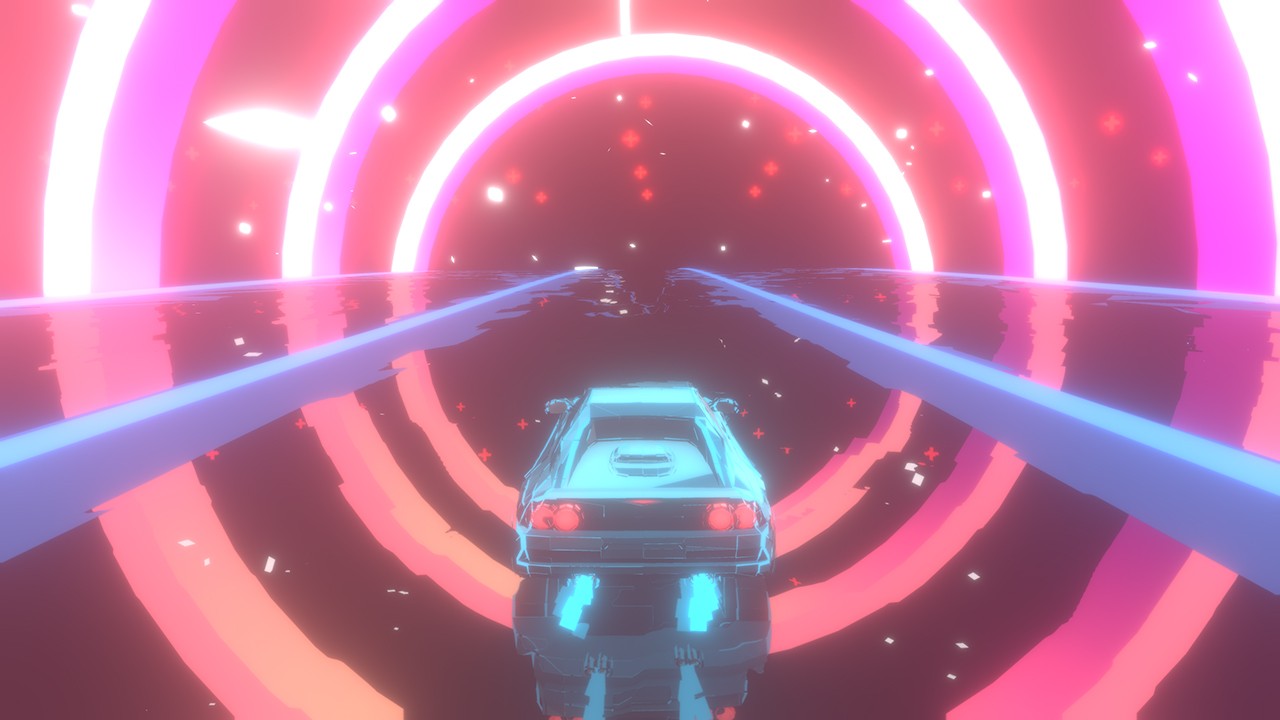 Customizing vehicles is pretty simple. You have the two choices of the body and the rim color of your vehicle. Collecting beats helps you unlock different types of vehicles that you can use and different stages as well. However, I feel like you would have to grind quite a bit to get the vehicle or stage that you want due to the costly requirement of beats on an item. I’m almost certain anybody would be tired of listening to the same songs over and over again just to unlock a stage or a vehicle just to hear them all over again. Unlike the PC version, console versions can’t add in their own soundtrack to listen too which was disappointing to me. After you get through the somewhat moderately small list of songs it will soon start to get repetitive hearing the same songs over and over again, especially if you don’t like some of them.

There are three game modes for you to choose from. There’s the standard mode where you collect beats and avoid obstacles, the hard mode where if you hit an obstacle you get a game over and have to start from the beginning, a zen mode where you just cruise along the stage and freely collect beats without having anything in your way, and finally, there’s cinematic mode where you just control a camera around your vehicle and watch it ride down the stage. Unfortunately, the hard and the standard mode basically play the same. There are no new obstacles added in the hard mode and other than the instant reset I stated, there is really nothing too hard about it. 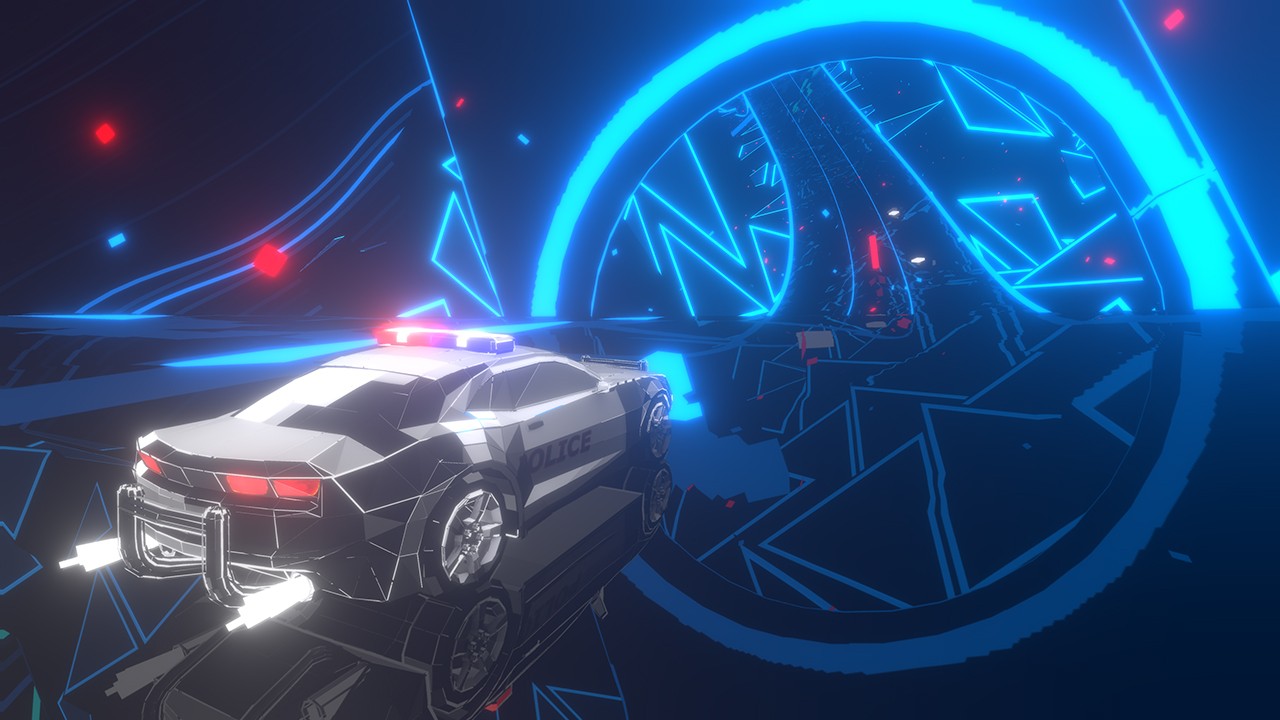 Graphic wise, the game as a whole is very aesthetically pleasing. You instantly feel the retro vaporwave vibes as you go throughout all of the courses. The cel-shading on the vehicles is also a nice touch which makes it stand out and compliments the surroundings.

For being a rhythm game, I think Music Racer has potential but it wasn’t fully tapped and executed as well as I hoped it would be. The music and scenery selections are beautiful and aesthetically pleasing to the senses, but that alone can’t support the gameplay. If anything I would only use cinematic mode just to listen to the music and watch the visuals in the background. I’ve played my fair share of rhythm games and Music Racer just doesn’t give me that same enjoyment and excitement as the others do. The replay value on this would be mainly to just hear the soundtracks again, but even then you could go on Youtube or any music streaming application or service and find it on there.

A racing rhythm game that struggles to keep the momentum.