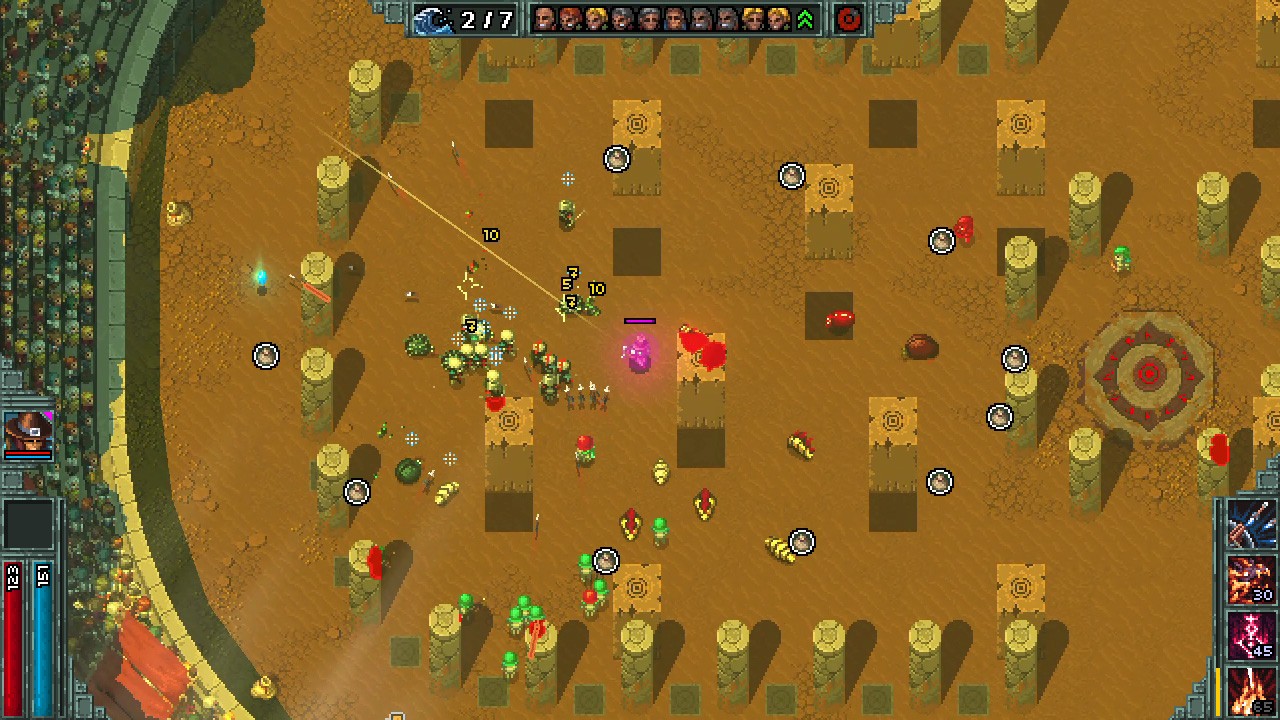 There appears to be a huge abundance of games in this genre in recent times, especially on console, and I seem to be reviewing a similar type of title each week. Not that I am complaining, I really enjoy this genre and the fact that there are so many differing experiences to work through. I welcome the fact that more and more are coming to the table with their own individual unique offerings. What really engages me with these titles is how they produce procedurally generated levels which throws out a totally new playthrough each time and Heroes Of Hammerwatch is no different in that respect.

You’ll start the game off in a small village surroundings where you’ll pick your character. There is a wide range to choose from with different classes and abilities. Paladin, priest, ranger, sorcerer, thief, warlock, wizard, gladiator and witch hunter make up the entire range of character options. You may want to spend a little time here thinking about what character to choose as each one has their own unique abilities along with attack and defend options. If I was to list all the abilities here I’d be writing all day but some of them are more suited to short or long-range attacks and others are handier with spells and magic use. Once character selection is complete, you will be able to wander around the village and speak to the community. The majority of the people you meet will be tradesmen from who you’ll be able to purchase a range of items, upgrades, potions and a whole lot more. 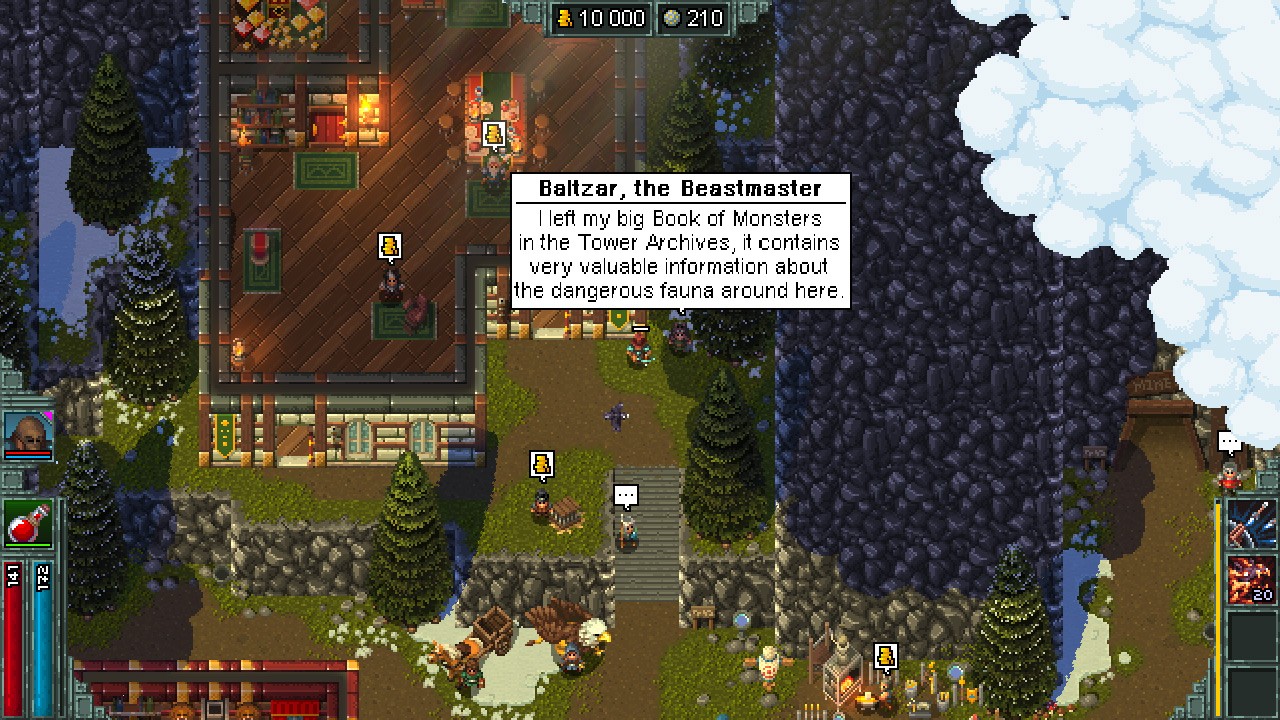 Once you are done venturing around the village you’ll be able to enter the mines at your own will. This will then trigger the campaign in which you will be exploring a variety of levels such as dungeons and castles. Throughout the campaign each of the acts finishes off with a boss at the end so you will want to make sure you’re well equipped when you end up at this stage.

The majority of the acts are filled with a huge volume of enemies such as bats, scarabs, maggots, ticks, scorpions and also undead types like mummies and skeletons. I found these to be very aggressive especially when in bigger crowds so you’re always wary of your approach as you can come out of fights quite hurt. Also you will encounter rooms filled with loot and traps scattered around which can be harmful if you’re not careful. The ultimate goal here is to clear the areas and find all the loot which will reward you in turn. The items you pick up will offer unique bonuses to your character as you work your way through the levels. These items will offer chances to dodge attacks and even allow extra gold to line your pocket as a result which is hugely beneficial to strengthen your character along the way. As mentioned there are bosses which vary in type, size and difficulty so you will want to proceed with caution. Beating all of the bosses throughout the campaign will grant you the ability to change the difficulty level if you fancied beating the game again with a harder experience. What I like about this is that when you have completed the campaign you genuinely want to have another go with the plethora of characters on offer. You keep the gold and ore you accumulate to spend on another run through but you do lose everything else you had in your inventory from before so do bear this in mind.

During your runs through the levels in the campaign you will have the opportunity to spend the gold and ore with the tradesmen I spoke about earlier in the review. Here you will essentially strengthen your character, which allows you to be more capable when in the midst of waves of enemies. Some of the upgrades that you’ll be able to purchase are permanent which will make you stronger, bolder and efficient in combat and defence. I found that if you wanted to farm extra gold and ore you can knock the difficulty level down and speed through the rooms. If you’re the type of player who loves to grind loot and levels then this title will be right up your street.

A welcome feature in Heroes Of Hammerwatch is being able to play with up to three others in co-op which in my opinion always makes games a lot more fun to play. The persistent progression of characters and swapping and changing between them make for unlimited fun alone or with your friends. Also seemingly never ending difficulty levels add sheer longevity for those who want the most out of the game. 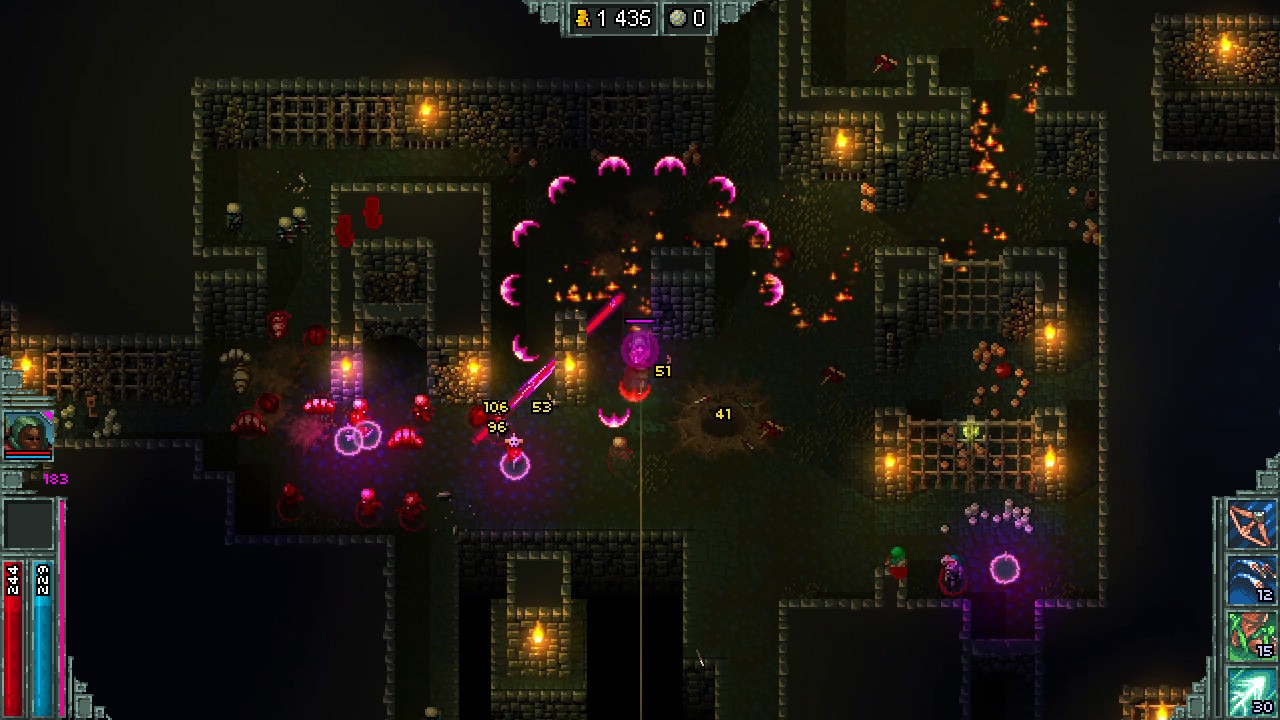 Graphically the game is visually sound with its beautiful pixel-art style and a retro feel that made me relive the joy of the Sega Mega Drive days. On-screen dialogue is clear and simple to read and sound effects are as you’d expect; whilst nothing is noticeably impressive everything blends in well with the overall package of content.

There are three downloadable content packages included here with Heroes Of Hammerwatch Ultimate Edition. Pyramid Of Prophecy boasts a new campaign which adds three new bosses and acts, new upgrades for the town and characters, a gladiator class, new items and mechanics and a new survival arena mode. Witch Hunter is more a series of add-ons such as the witch hunter class, new items and skills and mechanics. Finally, Moon Temple adds yet another new campaign to the game with three more acts and bosses, cosmetics and mechanics and a new permadeath mode where you can gain legacy points to purchase cosmetic items.

Heroes Of Hammerwatch is exceptional and I enjoyed every second of what I played so much to the point it is difficult to criticise any aspects or areas of the game. It offers endless hours of fun to be played alone or with friends with enough characters and difficulty levels to keep you going forever if you wanted. For its price point of just £16.79 at the time of writing on Xbox One it is well worth the cost and a game I will revisit from time to time for that pick up and play experience. One of the indie games of the year on Xbox for me for sure!