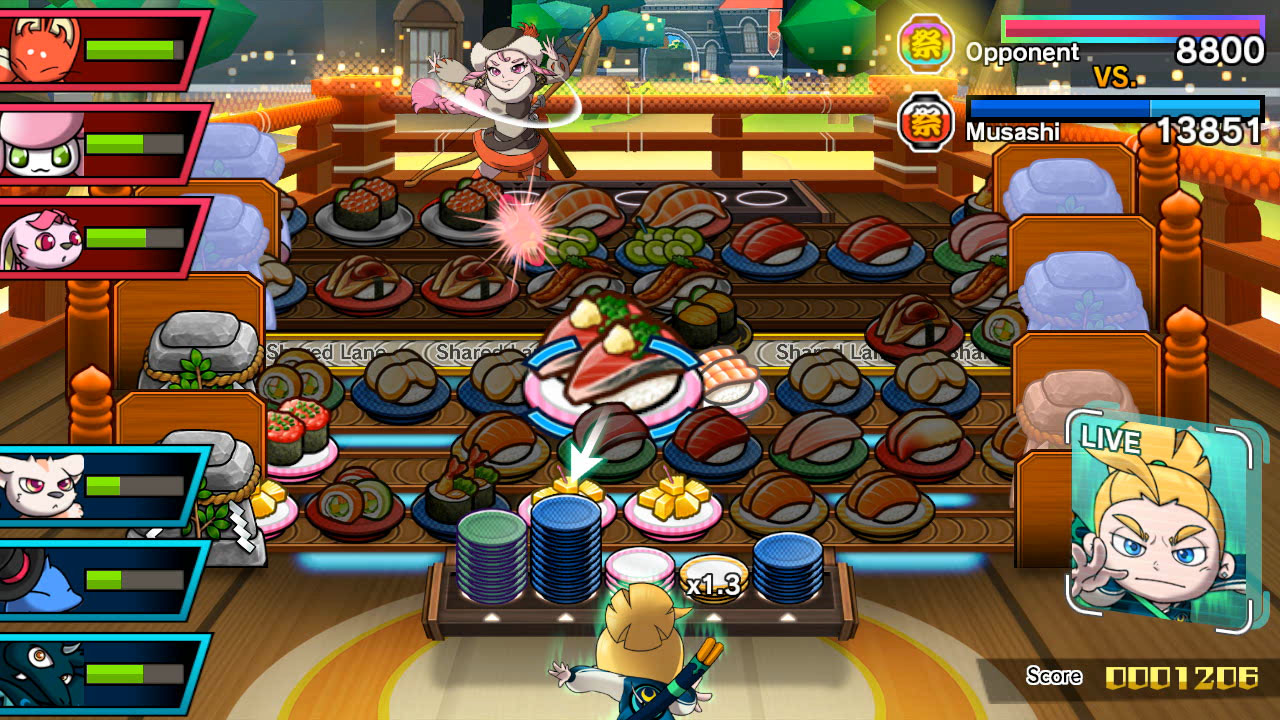 I keep putting off my review of Sushi Striker: The Way of Sushido in spite of having already put several hours into this game. I’ve gone out of my way, time after time, to look a little deeper, try something a little harder, mix and match every set of ideas I can think of to deliver the experience that I know Nintendo and indieszero wants me to have. There is a big, fat branded seal on this title that tells you “This is supposed to be AWESOME!” and I trusted that seal. I wanted to believe it more than I wanted to believe in most things. And yet here we are, just minutes away from Nintendo’s E3 reveal, and I know that nearly everything they’ll say there is going to pull focus away from this ill-timed release, because Sushi Striker simply can’t bring the magic it promises.

The concept is fantastic, and I can’t argue that away. This idea where sushi is a contraband substance that’s caused wars (called the Sushi Struggles) in the past and now it exists entirely through strict government control is deeply engrossing. To find out about a young orphan named Musashi whose parents were lost in the Struggles (and then to find out even more about that later) and realize he has innate power that attracts Sushi Sprites, which are magical beasts who are connected to sushi. Then to have these ridiculous battles that involve rapidly moving sushi belts, insane superpowers connected to sushi and a whole anime-level plot development about honor, loss, love and loyalty around sushi…it’s marvelous. The execution of the storyline is spot on, with the only negative points being that the English voices are the stereotypical dramatic and whiny voices that we’ve come to expect when you dub over a kids anime. But a lot of the target audience for Sushi Strikers won’t want to read super fast to catch all the dialogue, so the dubbing makes sense. I don’t have to like it, but I get it.

Most of your time in Sushi Strikers is going to be spent on the battlefield, where you have to chain together plates of sushi, eating them as fast as possible (only seven seconds allowed!), and then stacking the used dishes as weapons to hurl at your opponent. Eat more dishes of a matching type, end up with higher stacks, deal more damage. Eat enough of a certain type and you’ll trigger a sushi sprite’s power, which can then be used to affect the tide of battle in some way. From the healing power of Sweets Paradise to the bastard-level chaos of Hidden Plates, there’s a good number of abilities that can become available by partnering with more and more Sushi Sprites. You can only have three active at a time during battle, but you’ll find quite a few out on the road, and there’s not a great reason to NOT partner up. This is basically Sushi Strikers’ Pokemon moment: a bunch of cute and silly creatures who help turn the tide of battle. 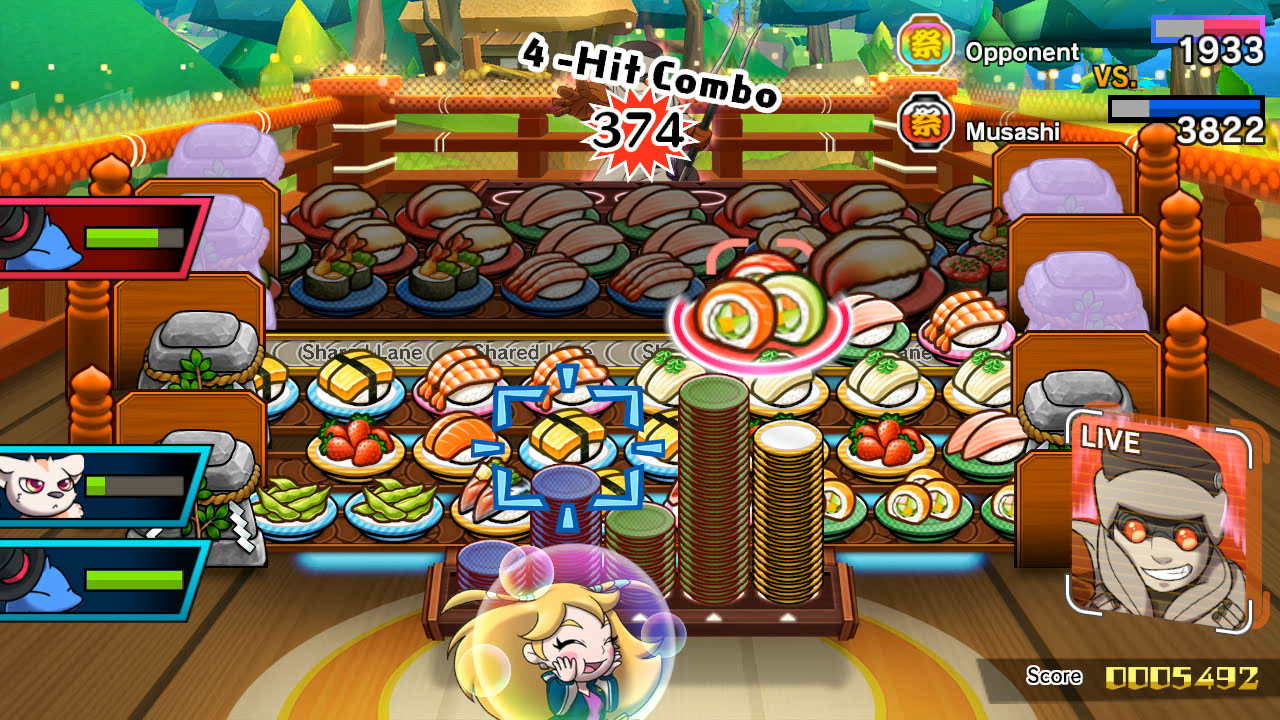 The good news is that, if you get into Sushi Strikers, there’s so, so much complexity to this game that is way beyond meets the eye. Not only are there sprites to level up, but there’s all these elements that you practice and hone along the way to make things more exciting. You get different “gears” that affect the speed and change of the conveyor belts. There are held items that can potentially turn the tide if things get rough, and might even resurrect you if you fall in battle. You can choose your favorite sushi, which then adds a passive bonus to you or your sprites (stronger strikes when all skill bars are full, or better EXP gains). You even do mini feats to accomplish a certain number of tasks in battles to get your striker rank up, which allows you to do greater battles and get certain goodies for proving your worthiness.

Additionally, as an inherently puzzle-based game, there’s plenty of replay value for your time. Each battle has three stars that you get from meeting conditions, along with a ranking system that goes all the way up to the coveted S rank. Repeating battles won’t net you extra goodies, but you will get more experience, which helps to power up your sprites, yourself and make for a better battle in the future. Going back and grinding old matches is essential to a smooth transition forward, and also experimenting with which sprite team works best for you. Maybe having the right skills for defense is key, or maybe just getting the best HP boost from the right trio is the gateway to victory. If you’re in it, and I mean you really get into this game, you find out just how deep you can go, eventually even competing in split screen mode vs a friend or through local battle. Though, seriously, I have a hard time finding other people with Switches, much less people with the same games I do. Oh, you’re STILL playing Breath of the Wild? Holy crap. 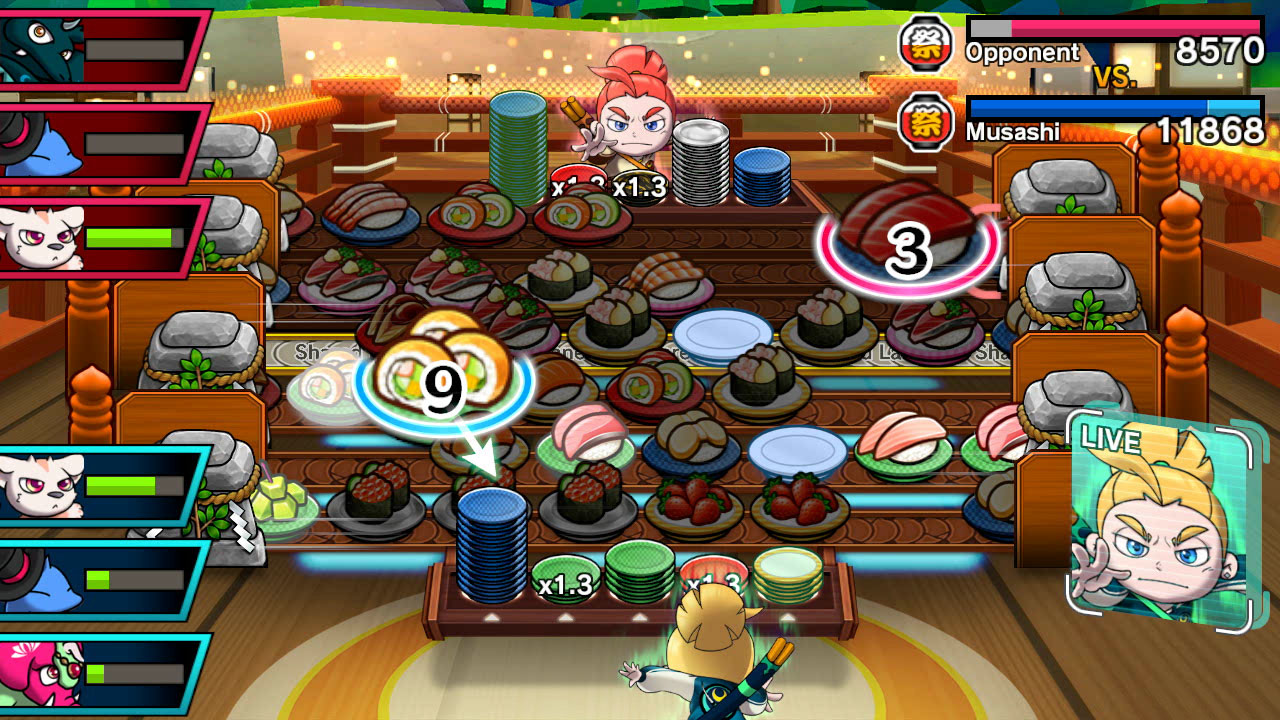 But all of these good points only matter if you like the game, and to like the game you have to like the root of it all: the gameplay. And I simply don’t. Far from feeling strategic or complex, every match of Sushi Strikers felt like I was simply winning through sheer luck and reflexes, not from actually understanding what was going on. Rather than figure out the whole details regarding Advanced Techniques (which are described in a manual your character carries), I found that just hooking onto a plate and spinning my joystick wildly until I got a good chain number was most important. There’s a clear showing that the best way to play is probably touchscreen, due to the way the attacks and snacking works out, but I hated that idea, so I just kept fidgeting around with the JoyCons. The end result is that I just went into a battle, spun around for a bit, and either won or lost. The character development of everything didn’t really leave me invested in the story or the people or anything, just…I was there. I ate sushi, and I threw it, and that’s the end.

The problem comes with the fact that, had I just discovered Sushi Strikers arbitrarily on the eShop, or been clued in through a Twitter post or something, it would have been a pleasant surprise. It would have been an incredibly polished, surprisingly complex and astonishingly long game that was a great example of what the Nindies could bring. But this is an inhouse production, that was featured during a Nintendo Direct, and had the bad fortune of releasing to the public about one week before Nintendo drops the biggest news bomb of the year. And Sushi Strikers asks for a AAA pricetag on a game that really just doesn’t feel it. There’s just not enough here to make me think “I would buy this instead of Donkey Kong.” It’s not a genre thing or an age thing: this is a good game, but it simply isn’t good enough to command the demand it expects. And that’s a shame.

Sushi Strikers will have loyalists who play this game to the bone and get a ton out of it. ARMS continues to show love and appreciation to the people who bought it, and maybe that’ll be the case for the sushi enthusiasts the world over. However, for a lot of the folk who have been clued into the Sushi Struggles, this simply is an appetizer, and you’ll be left hungry for something else.