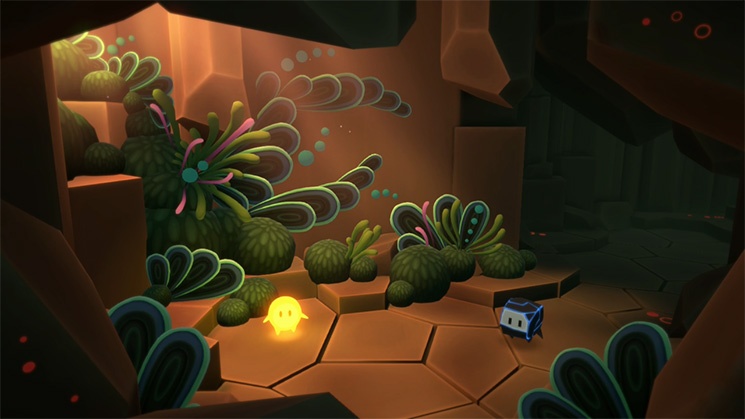 Discovery can be a wonderful thing; especially when exploring new lands or locations, revealing hidden talents and even coming across a new video game. It can create feelings of elation, personal freedom and self accomplishment. In fact, exploration and discovery can be two of the most important elements in the structure of video gaming; something which has never been more prevalent than in Henchman & Goon AS’s new co-op puzzler for the Nintendo Switch, Pode.

Although primarily a puzzle game, this title also incorporates many other elements within its gameplay. There’s adventure, elation, accomplishment, exploration and discovery; an enticing set of ingredients mixed together with sublime visuals and soothing soundtracks to produce one of the most relaxing experiences I’ve ever had the pleasure of playing. This is all achieved by a level of charm that has been incorporated into the game through level design, storytelling and character interactions.

The story follows the exploits of two characters: a small rock and a fallen star. This unlikely pairing finds themselves at the foot of a large mountain that opens up to them. As the two of them wander inside, their elemental powers allow them to manipulate the landscapes within a series of cavernous rooms that contain a number of riddles and mysteries that need to be solved in order to advance. In order to achieve this, the rock and the star need to work together to traverse the various terrains and open the seals that lead to various locations of exploration and discovery. 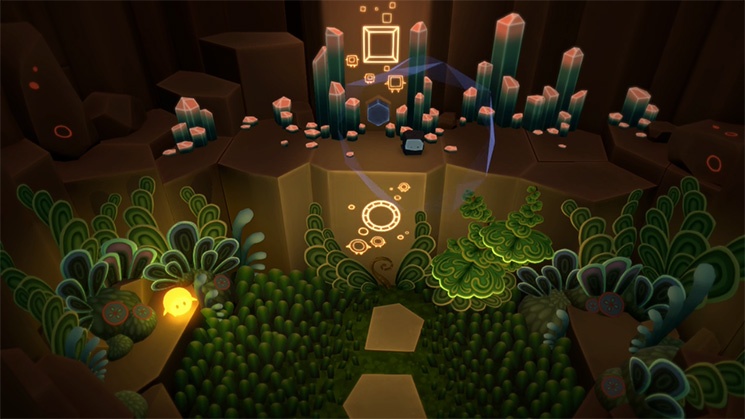 Each of the rooms often start off as dark and foreboding places. However, by utilizing the power of their elements, the shining light of the star and the formation of stones from the rock, the two characters begin to bring life to the vast expanses, uncovering a series of secrets that hold the key to the advancement of their journey. This can be achieved by depressing the ZR shoulder button with whatever character you control, producing a radiating eminence that glows around them. As you pass by certain structures, or explore the regions within your cavernous location, your elemental glow creates all sorts of changes to the environment, bringing life to greenery and plantlife and forming crystals and rock formations which alters the state of the room.

Character selection is performed by pressing the Y button, which switches between the two. However, its execution is superbly implemented as you can order one character to create its glow and continue doing so, as you switch control to another character so that the two of them can work in unison. This becomes an important element in the gameplay, as this title focusses on partnership and the ability for two beings to work together to overcome their situation. This can be performed in a number of ways, from standing on each others shoulders to jump up upon out-of-reach ledges to activating switches in unison; you can even consume the star, as the rock, and spit him out across seemingly impassable ravines.

Although a co-op puzzler, this game also caters for solo play with a sublime mechanic in its control scheme of operating two characters. However, it has to be said that this game absolutely shines when played locally with another player. Working together to solve the mysteries within each room can be a fun experience; often resulting in hilarious interactions as you figure out, or work to, the solutions within. It also helps that this is a title that simply oozes with charm, especially in the aesthetical presentations of the game and two characters who you simply can’t help but fall in love with. 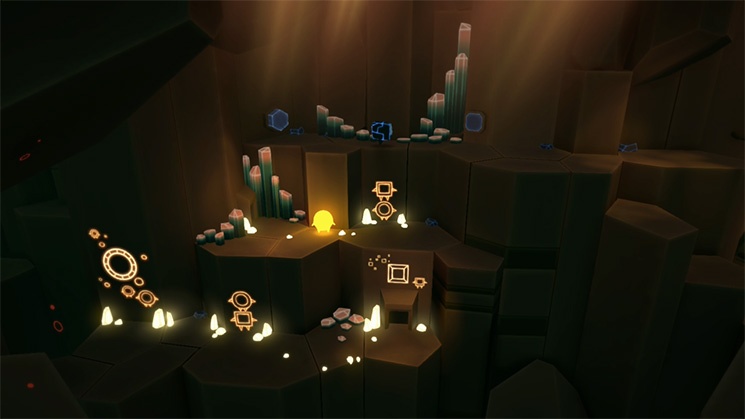 The whole presentation of the game is expertly done here. Each location is wonderfully crafted. However, bringing them to life is a wondrous experience; often producing a series of floral patterning that is heavily inspired through Nordic culture, art and nature. Each of the cavernous room are beautifully detailed, with camera angles that pan around and zoom in and out as it follows your characters with effective angles and ease; there are even instances where the whole view shifts between side-scroller, behind-the-shoulder and isometric angles.

The sound values are worthy of a mention here, with a soothing soundtrack that never tires and matches the ambience of the changing scenery around you. However, if there’s one element within the sound production that I simply can’t enough of, it’s the vocal presentation of the rock character. His cutesy grunts instantly won me over, often producing many moments where I just stand there and produce his gravelly voice; all with a constant smile spread across my face and a melted heart.

It’s this calmness of presentation and soothing experience that simply makes Pode shine; causing its gameplay mechanics to be simply irresistible. The mysteries contained within each of the rooms forces you to play the game, as does the manipulation of the environment to beautiful effects and the elements of working together to produce wondrous results. There are moments of head-scratching, as you stop to work out the solutions to the puzzles that are presented to you. However, they never feel frustrating or push you to a point where you feel the need to rage quit. Despite its co-operative values, this is a game that can be played in a solo capacity, without losing out on any of the fun or experiences that this title offers; although, playing with a human partner does nudge its entertainment values up a little bit. As a whole though, Pode just looks and plays beautifully, creating an elegant game that provides many hours of relaxing and soothing gameplay that you can just chill with; or simply put, this is a title that is easy to fall in love with and its cutesy charms and captivating gameplay will capture your heart in the same way as it captured mine.

A charming puzzler, inspired by Nordic art that is sure to melt your heart with its lovable characters and sublime presentations.