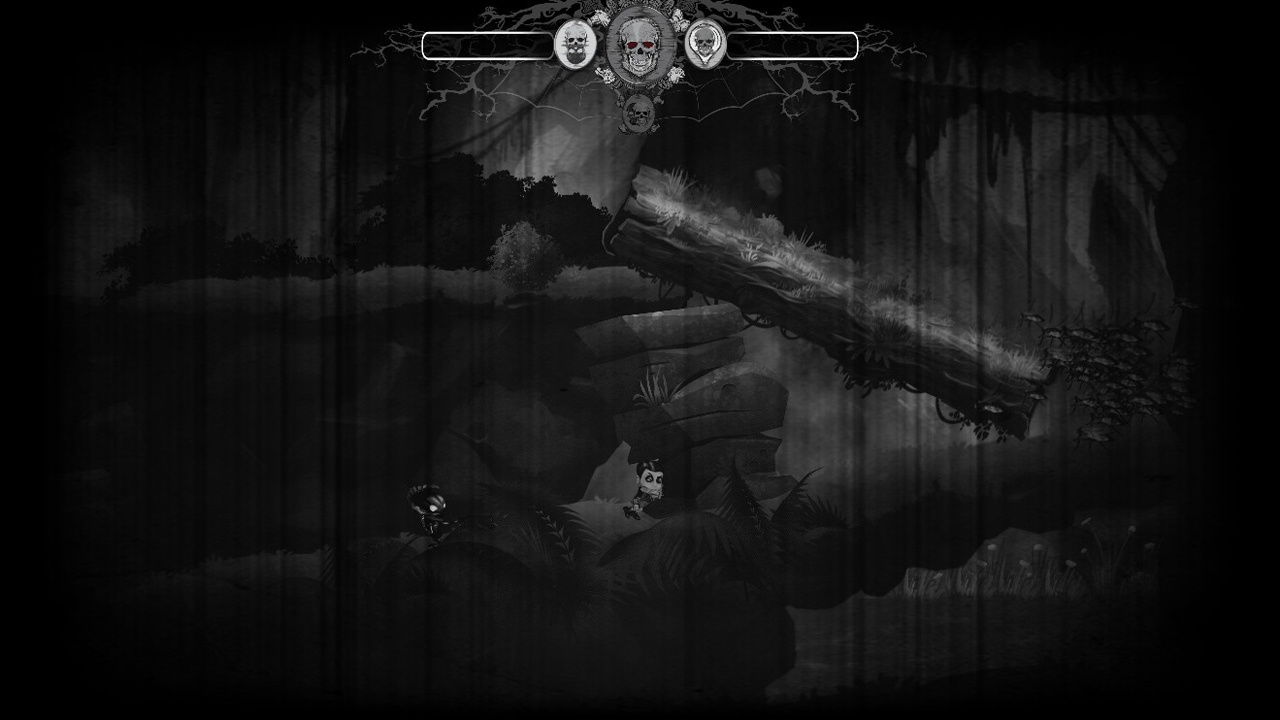 Dreams are often nice places to visit; sometimes recalling lost memories or people who have long gone from within our lives. They can even send us to fantastical places that helps to promote a feeling of well-being when we awaken. However, with the release of Dream Alone on the Nintendo Switch, we are being sent to the darkest corners of our nightmares. Not just in terms of how the game looks, but also in how it plays too.

Developed by Warsaw Games and published through Fat Dog Games, this indie 2D platformer will have you screaming from your slumber with its series of deadly traps and dark storyline. It follows the story of a young boy whose village has been struck by a mysterious sickness. One-by-one, the people of the village begin to fall into a coma and as the family of our protagonist fall into the same fate, he embarks on a journey to find a mystical sorceress, the Lady Death, who is fabled to contain the powers that can stop the spread of the disease and bring prosperity to the village once again.

Your journey is a long one, taking you through a variety of landscapes such as forests, cemeteries and ghost towns; even traversing through alternate realities that alters the world around you. The presentation of Dream Alone follows in a similar premise of titles such as Limbo or Inside, in that it uses the contrast of silhouettes to create its foreboding lands, as well as follows along the same elements in its platforming mechanics. Each of the locales are littered with deadly traps, poisonous creatures and spike-laden pits that kill instantly upon contact. 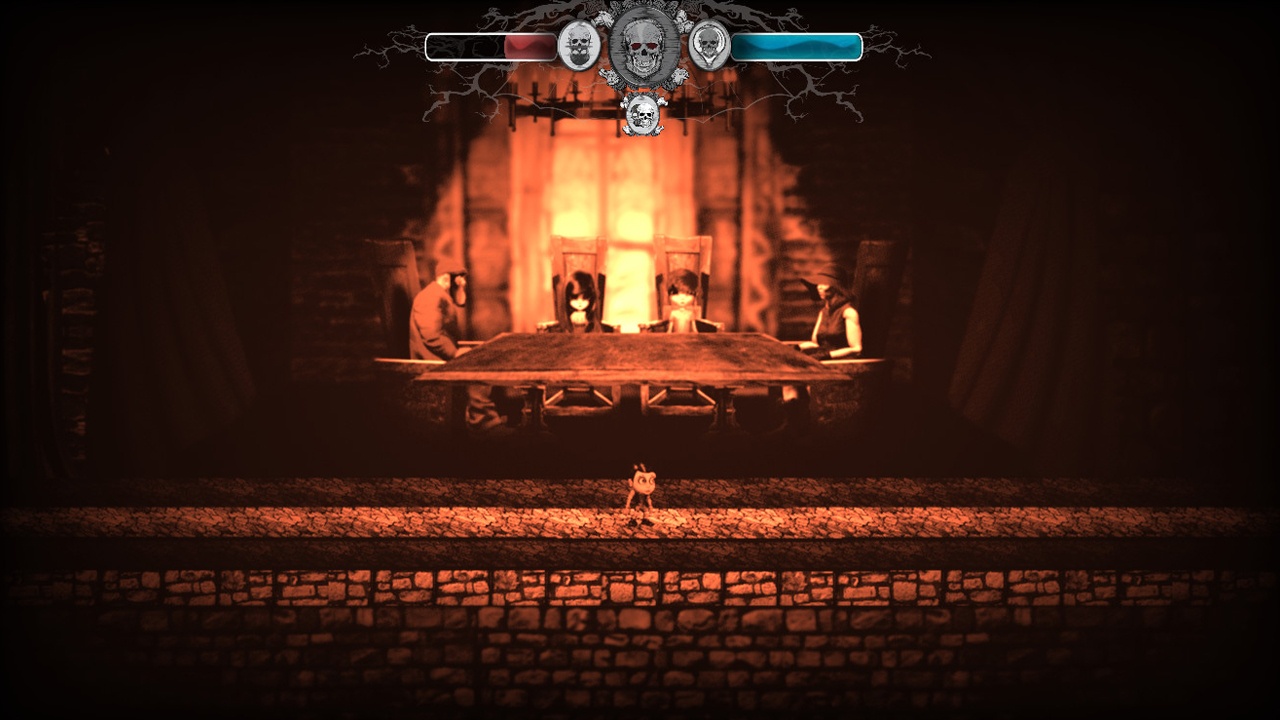 In order to traverse through the hellish nightmares of each level, you need to be precise in your movements, from running to jumping; being careful to avoid any of the obstacles that laden your path towards finding Lady Death. Although death occurs instantly from each unsuccessful navigation of your course, with gratuitous blood splatters across the screen when you do so, checkpoints are never far behind from where you restart your journey. This isn’t a bad thing either, as you’ll die a lot in this game; and when I say you’ll die a lot, you’ll die a hell of a lot. Seriously, this game makes Dark Souls look like walk in the park.

As well as containing a myriad of deathly devices and creatures, each of the levels also contain of host of puzzling sections that require you to move objects such as rocks and crates, or deactivate traps such as swinging axes, circular blades and pneumatic stamping machines. However, certain locations have seemingly no way to traverse past, or around, them. In order to advance, you need to utilise your power of being able to shift dimensions into an alternate reality that hosts all sorts of horrors from swinging corpses to undead tea parties. In order to shift in and out of reality, the young hero can collect glowing orbs which fills a meter, the higher the meter, the more time you can spend within the alternate dimension. Whilst in this altered state, the landscape around you changes, often opening previously impassable routes or manipulating the area to allow you to proceed.

You can also call on other abilities to help you on your quest, such as slowing down time to avoid certain traps, or creating clones of yourself to use as a distraction for the horrors that walk the lands and summoning a light to illuminate the area around you. Despite these abilities though, you’ll still reach a grisly demise frequently. A lot of this is down to level design, which can be avoided with learning the patterns of what the current level holds, but there are also a number of other elements that can lead to your death. Unfortunately, these aren’t due to purposely laid traps or monsters, but down to a few design elements and broken mechanics; none of which can be avoided through skilful gameplay. 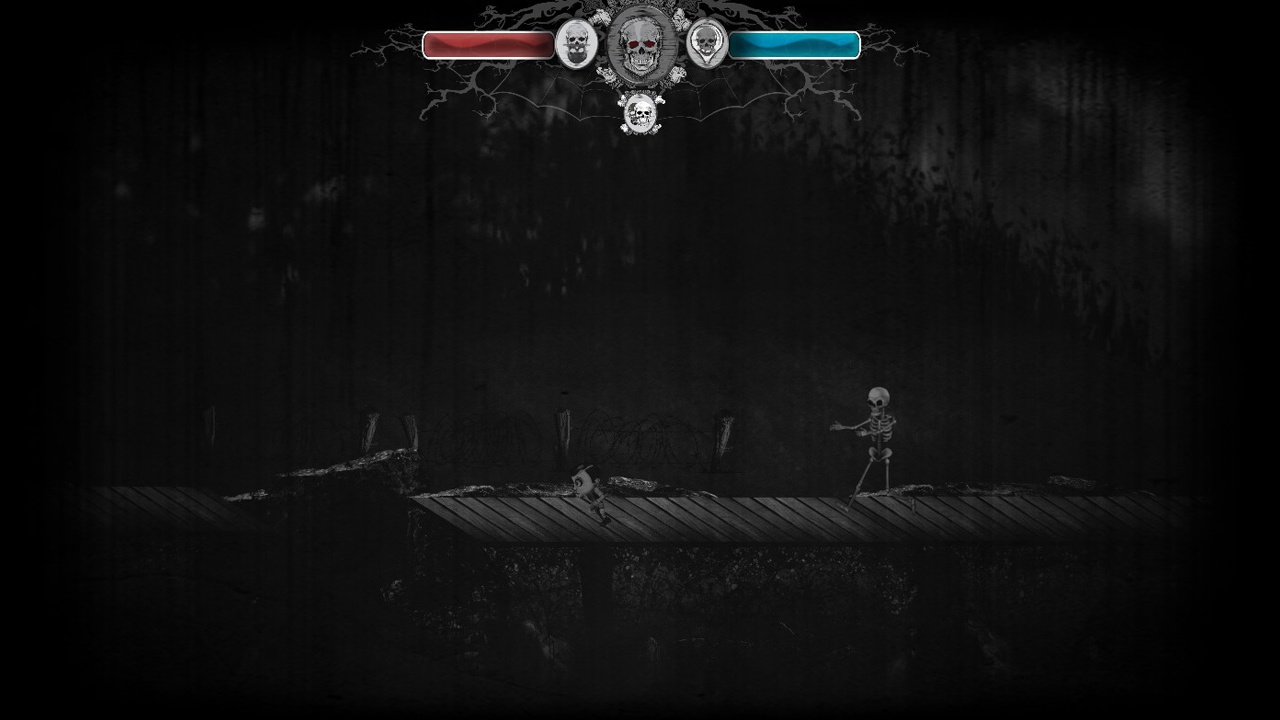 The first of these elements comes in the form of the aesthetics themselves. The whole design is purposely dark to create a horror and nightmarish ambience. However, within the majority of places it is just too dark to make head and tail of what is going on, or what lies before you. Ground laden traps are sometimes impossible to spot, as is the path before you; especially when it comes to leaping over the pits that line the floor. It may be intentional, but sometimes it’s just too hampering to the gameplay; something which particularly becomes highlighted if playing in a light environment. You can overcome this difficulty by learning the layout of the land, but this inability to see clearly can also lead to other malfunctions within the game’s design.

I quite often came across points where my character became stuck within the scenery, or within the dark expanses of a void that, although animations were triggered, my character would not move from the present position. The biggest pitfall came in the guise of a hole within the floor, however, this was a hole that wasn’t purposely meant to be there; it was just simply a fall through the floor beyond the graphical representation on the screen. These problems didn’t happen on a frequent basis, but they happened often enough to frustrate and cause you to lose interest with the game.

Despite some glaring issues, one thing that this game does right is its representation of capturing a mood of intrigue, horror and mystery. However, this simply wasn’t enough to invest me fully into its gameplay. At the time of writing this review, the developer’s are aware of some of the game’s shortcomings and will be working on a patch to fix the issues. Whether it will be enough though, remains to be seen. However, if you like a challenge then this is a pretty hardcore game for hardcore players. There are aspects of the game that do look a dream, but unfortunately, too many broken mechanics ultimately leave this game as nothing more than a nightmare.