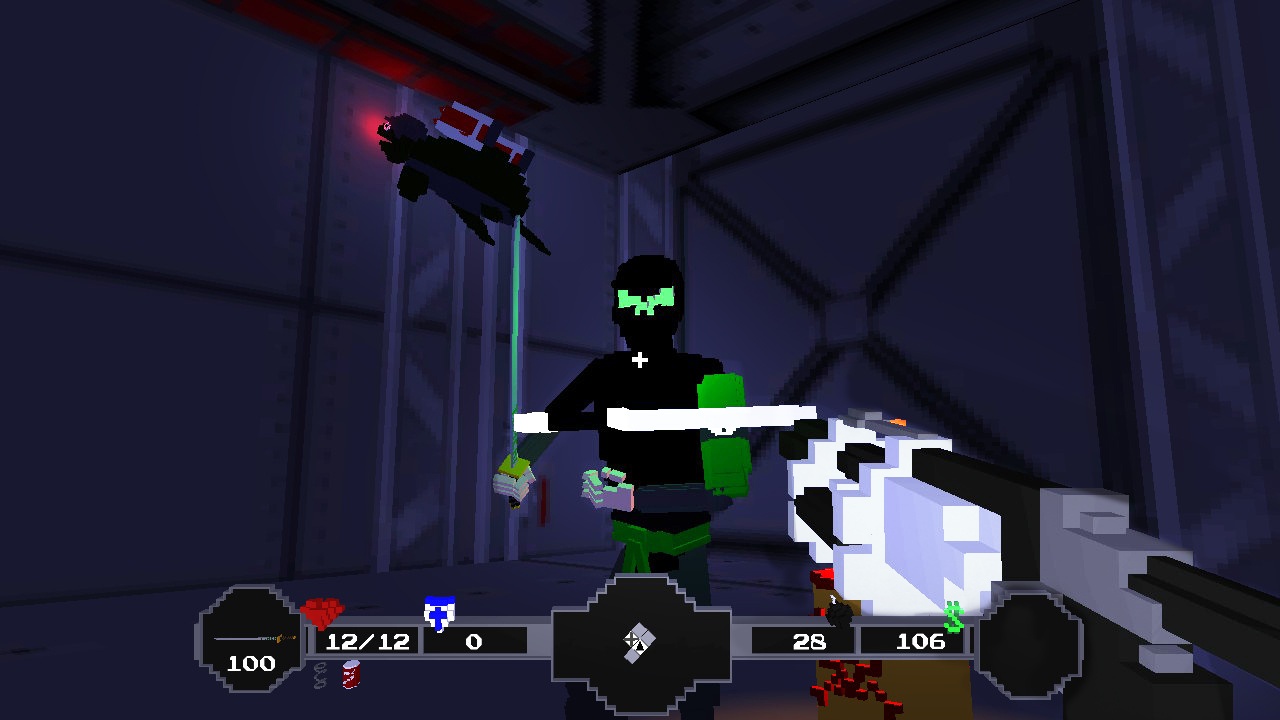 I’ve been searching for a shoot em up style game on the switch, besides Splatoon of course, which I can really get my teeth in. Unfortunately, it seems I’ll have to keep on looking as Digerati’s Paranautical Activity disappoints in the most grandest of fashions. For those willing to test the waters, the game currently costs £7.19 (currently on 20% discount offer until 05/07/2018) and will take up 407 MB of data to download.

There is little in terms of plot for the game, as each round you begin in an elevator on a floor where you go from room to room, shooting waves of enemies and taking on bosses to get to the next floor, with a total of eight floors in total. Standard progression for a game, and there is an increasing difficulty as you climb the floors to the top (or bottom, it’s not really clear, I assume I’m on a boat or in a cave or something. Who knows?) There are seven characters to choose from, David Bowie, Dy-No-Mite!, Gilead, Gorton, The Tank, The Bouncer and Mystery Man. Each of these characters are defined by the weapons and stats you start off with. My personal favourite being the tank for reasons I’ll return to shortly. There is also a variety of monsters and bosses for you to take on, but I couldn’t mention what any of their names are, and they are all quite generic. However the bosses are quite interesting and offer a fresh challenge each time I face one, the giant whale is a particularly fun fight. 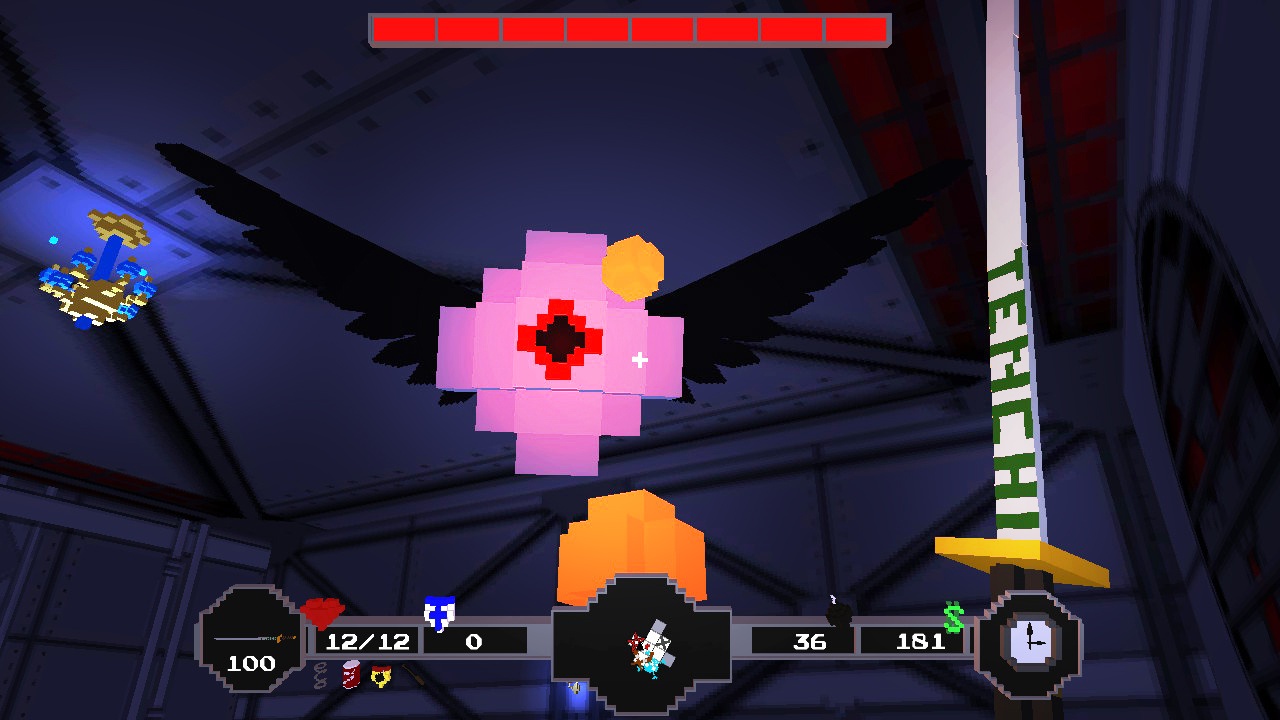 The game has a blocky, almost Minecraft inspired graphics which is nice. Shame you can hardly see it at points because the game is so dark. Now I understand that the point of the is to fight monsters in a dark space and make your way to victory, but maybe the brightness could be increased a bit more so that the enemies shaded in greys and blacks don’t disappear into the walls and floors which are the same colour scheme. The enemies’ designs also vary in creativity levels, with the flying enemies tending to seem a bit more developed than earlier creatures, such as the black blobs that follow you around on the floor.

The music, is very distracting. Described as a ‘kick-ass dub step sound-track’ on the E-Shop, it just comes across as a barrage of noise that I just ended turning off and playing with just the other sound effects, which made the playing experience a little better. 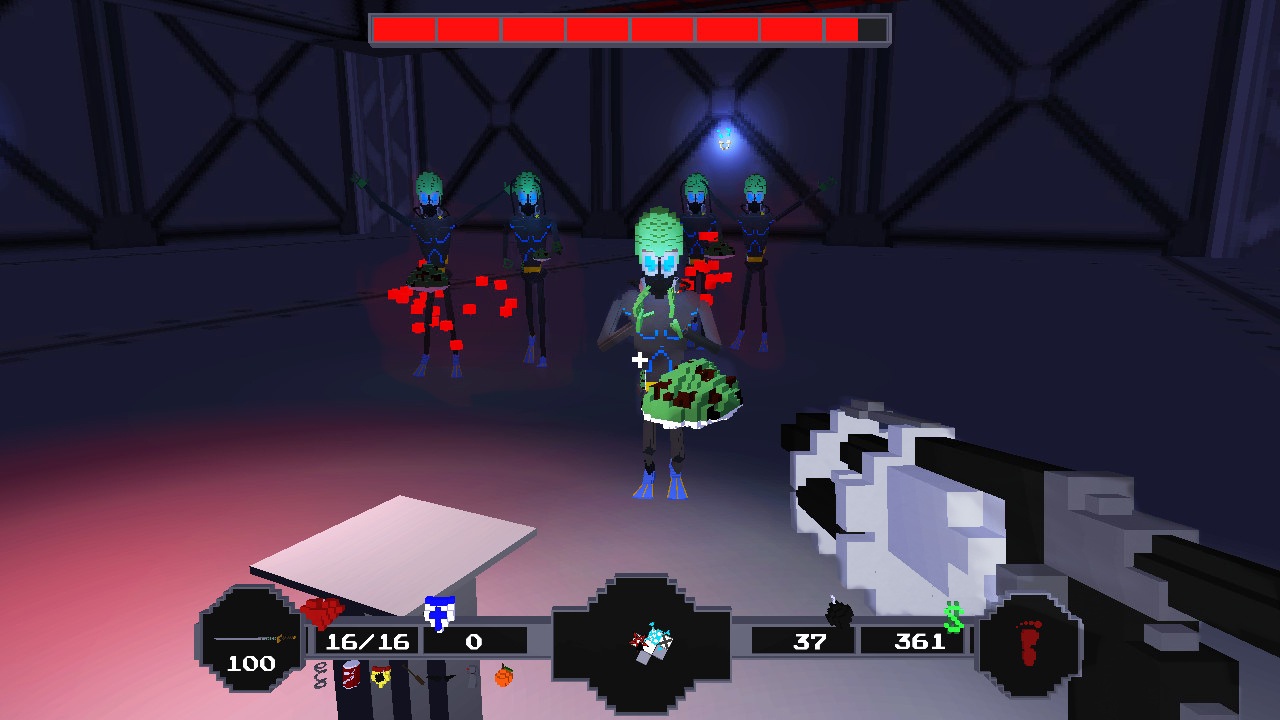 The gameplay is, to say the least, shocking. The only character I could manage to get any sort of success out of was the previously mentioned Tank, as the weapons were explosive and could hit multiple targets at once. It would also be nice if there were any explanation into some of the weapons for each character, as I’m still not sure what half the weapons do, I just hold the trigger and hope for the best. On each level there is also the opportunity to buy items with gold that monster sometimes drop when you defeat them, however don’t expect to be able to buy anything on the first couple of levels as you will definitely not have enough, which is super annoying. When you defeat a level you will always gain an item or power up of some kind, but yet again there is very little explanation as to what anything you get does. The game also has 45 achievements for you to unlock throughout playing which unlocks other items, characters and game modes, which was probably the most enjoyable aspect of my experience.

Paranautical Activity was just a disappointment, at least in my eyes. With sub par design, janky gameplay and music that made me want to never pick the game up again, this is one title that it might just be best to skip.