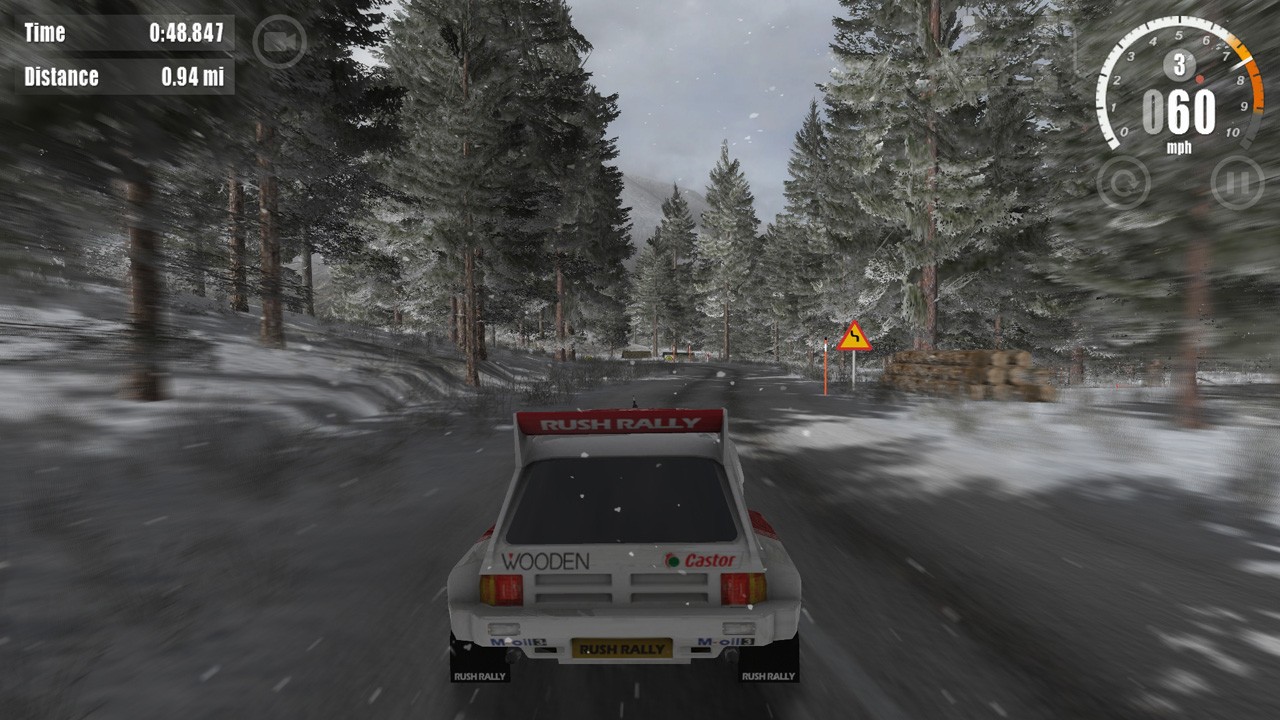 The holiday season is here, and not long from now, you’ll be putting on that DVD/Blu-Ray – perhaps even streaming a Z-list celebrity fitness workout. Well, save yourself some money and take a leaf out of my book and do the rally work out. It focuses on butt-clenching mostly, as you’ll be throwing your car around blind corners at silly speeds, all to shave some time off the leaderboard. The fitness equipment I’ll be using is Rush Rally 3 on the Switch.

I like driving in real-life and also when it comes to gaming. I don’t discriminate and will literally play any genre and most likely to enjoy it, but rally driving is one of my favourites. It’s a sweet combo of high speed, drifting and lovely scenery. It also beats driving around a speedring 200 times.

Now Rush Rally 3 wasn’t at the top of my list to begin with; not because it’s a turkey, but simply because I hadn’t heard of it. However, I’m glad I gave it a go, as it’s quite possibly one of the best rally games I’ve played. You read that correctly: Rush Rally 3 is ace.

The Switch doesn’t have the best driving games catalogue just yet, and the Mario Kart series, despite being a no-brainer in terms of ownership, only has so much mileage. Rush Rally 3 is packed full to the brim – so much so that you’ll be handling your Switch with kid gloves in fear of spilling all the goodies. 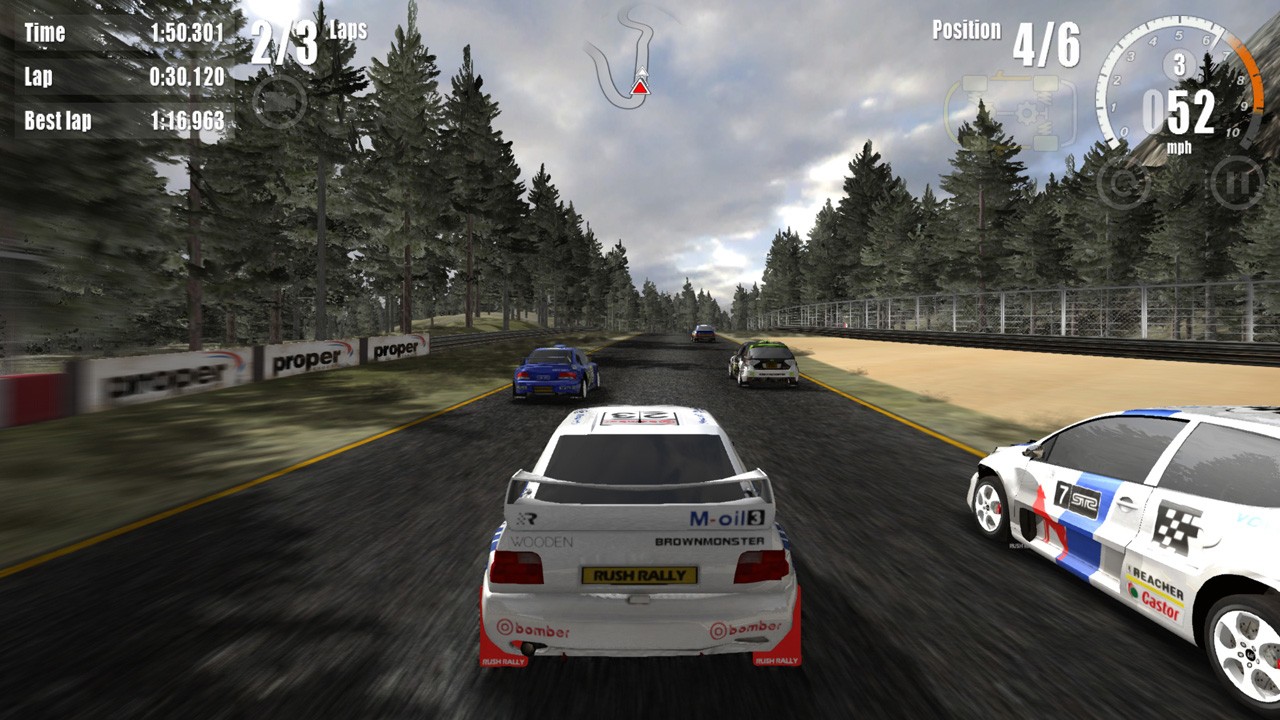 What I can’t fathom is that this was designed as a mobile game. There’s so much variety that it feels like a triple-A title. It wasn’t so long ago that I played WRC 8 and while that has higher resolution graphics and is officially licenced, I’d argue that Rush Rally 3 can go toe-to-toe with it, even having the capacity for a K.O. I was that impressed, but also shocked that you can fit this onto the Switch (it’s a minimal footprint on your SD card too).

The cars handle really well, and they feel like they’re on the track; the shocks bouncing according to the contours of the road and borderline fishtailing in slicker conditions. I’ll have to say that I wasn’t that fussed with the crashes. The cars collide appropriately and don’t suffer from invisible obstacles launching them up into the air, but I was hoping to obliterate my car into a tree full speed. Not intentionally of course.

Rally driving brings out fierce competitiveness in me and Rush Rally 3 is no exception. I’d have to say that this had me focusing on marginal gains and ensuring that my senses were heightened; picking the right racing lines and applying the throttle just at the right time to take a hairpin. During each stage, you will see a real-time indicator of where you currently stand in the race with a gauge that lets you know whether you are ahead or behind the race leader. Sure, most games have this, but usually, it will flash up at a checkpoint. Rush Rally 3 is different in that the gauge shows continuously. With this method, I could see that when I had applied the brakes a little too hard, I was falling behind, but going flat out for just those split seconds longer than my opponents put me back in the lead. I loved this as it forced me to experiment more with the tracks to get back in the game, but best of all, and most surprisingly, I didn’t crash through all the distractions.

There are so many options and driving assists available from the outset; you can fine-tune to your driving style. I kept everything more or less neutral and running with the default settings and have to say it was pretty hard, yet very enjoyable. At best, I found that I was frequently finishing in fourth place. I usually set out well on the first stage but would cut a corner in error and incur a time penalty, so the next run would be me flooring it far too much to catch up. And, as you’d expect, the more risks you take, the more likely you’ll run off the track and incur more penalties. Harsh, but incredibly fun and far from a deterrent.

Visually, Rush Rally 3 is impressive. The spectators at the sides of the tracks are a bit ropey at times, but when you’re playing a rally game, you really shouldn’t be focusing on that. Instead, your eye needs to be on the track ahead, and I have to say, the locations are fantastic. There are plenty of scenarios. Sweden was quite possibly my favourite location as I seemed to be pretty good on the snow, despite detesting snow driving in real life. Sliding downhill on ice on a mountain is not fun. I experienced this first hand, and it put me off for life; however, nobody gets hurt in Rush Rally 3, so I just floored it.

As it’s a rally game, you’ll have a navigator giving you pointers along the way. The voiceovers are okay, they aren’t arcade-like in the style of Sega Rally nor do they distract from the driving, so you can choose to ignore them, like I often do, much to my disadvantage. The sounds of the engines rocking, smashing over rocks is excellent and sets the scene perfectly. 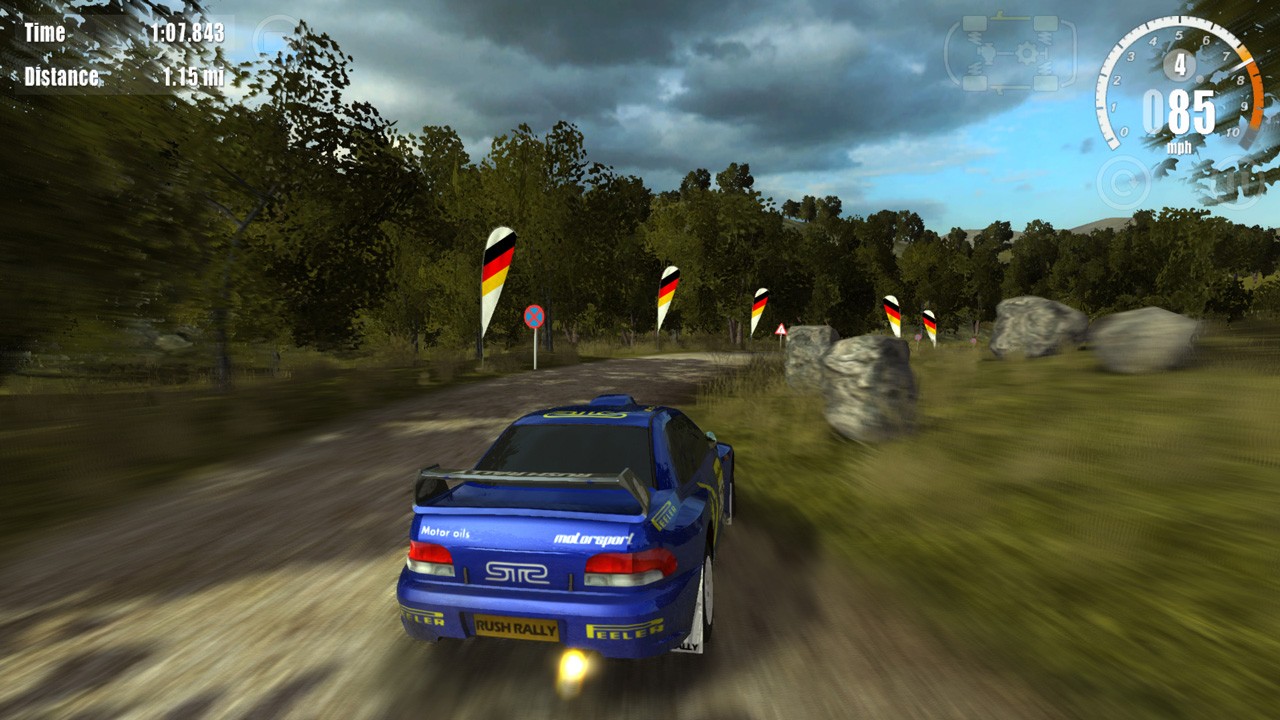 So, the perfect rally game then, right? Well, it’s undoubtedly one of the best I’ve played. Ever. Although… a little niggle is the licensing. It doesn’t affect how the cars perform, but as it’s unofficial, you have car manufacturers such as Fjord or drivers like Bichard Rurns or Ben Klock. Just in case you don’t know either of the two drivers, the first is Richard Burns and Ken Block. Both fantastic real-life drivers and if you’ve haven’t seen the latter in action, look up Gymkhana on YouTube once you’ve finished reading this. It isn’t the end of the world, but having one of my favourite cars (the Nissan Skyline) being called a Skylight was a bit strange, but it’s clear what the model is as they are rendered really well.

I also wasn’t a fan of the menu systems either. They felt a bit like Windows 95, lacking any character and very grey. But when my criticisms are about officially licenced products and whether a menu is pretty or not, you’ll hopefully get the idea that I loved this game.

A decent campaign is critical in a rally game, and there’s no question that Rush Rally 3 delivers. How about other features I mentioned at the start? Well, much like the Gran Turismo series, there are skill challenges (I suppose you could liken these to the licenses in the title mentioned above). These are great little mini-games to improve your skills, such as avoiding traffic and harnessing your handling abilities. You’ll need it on some of these tracks as the terrain frequently changes. There is also an abundance of online ranking modes and LAN multiplayer races. And of course, there’s a garage to buy new vehicles and have a browse at the ones you already have.

There aren’t many genres that I don’t like, but there are always two standout types that I’m always on the lookout for on the Switch: driving games and football games. It’s not that these are my ultimate genres, but I need a go-to title for each. I’m still on the lookout for a decent football game, but I may have found the driving game for when it comes to the Switch: Rush Rally 3. This is my favourite driving game on the handheld; the previous titles would be Virtua Racing or Asphalt 9 Legends – both of which I hold in high regard.

If you fancy a spin around a tarmac ring for a good 20 minutes or so, Rush Rally 3 might not be for you. But, if you want to burn off those extra calories from Christmas by sitting on the edge of your seat, desperately targeting those few seconds off your time to get on the podium? Then go for Rush Rally 3.

Leave all the other chumps in the dirt and get your trusty Fjord at the top of the driving championship.

A great selection of tracks and car models

The cars handle really well
Plenty of viewing options for first-person fans or even the chase cam
In comparison to similar titles, it’s quite fast at loading
Achievements awarded for finishing championships and challenges

Unofficial: driver names and models a play on words
The menus are a bit bland
Crashes aren’t dramatic enough