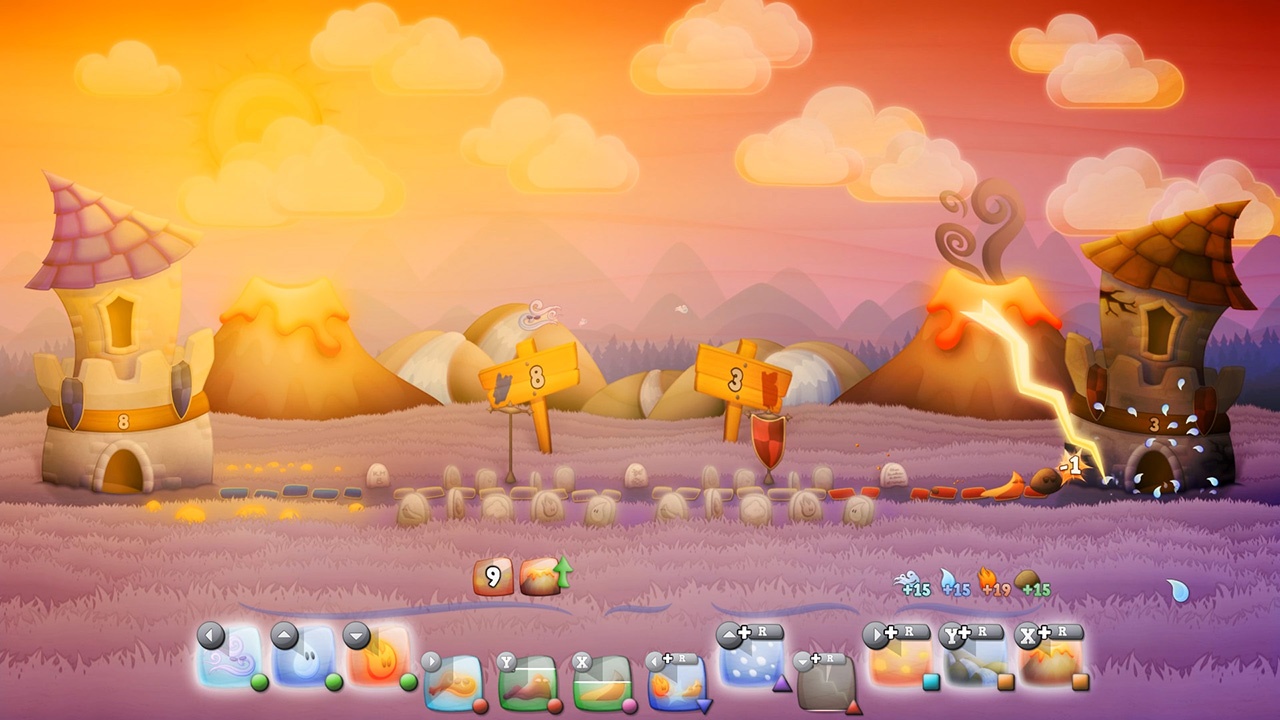 I should imagine that most people have heard of the game rock, paper and scissors. You know the one, it’s where you make a random choice of three hand gestures and depending on your selection, determines whether you lose, win or draw. Well, Alchemic Jousts, a new game out now on the Nintendo Switch, takes this simple formula and with a touch of alchemy, completely turns it on its head. Developed and published by Lunatic Pixels and Eastasiasoft, this tower defence title adds together a sprinkling of strategy, mixes it with a touch of alchemy and stirs it together to produce game that oozes with depth and a variety of gameplay modes.

Its main premise focuses on the use of elemental values and their ability to mimic the rock, paper and scissors mechanic. It’s by no means a new idea, many games in the past have used the power of elements to determine strengths and weaknesses, but Alchemic Jousts takes the concept to a whole new level that, although fun and intriguing at first, soon develops a flame that burns out quickly. The majority of the gameplay revolves around two towers that stand opposite each other; one yours and the other being an enemy installation. Although the game contains various game modes, of which I’ll get to in a bit, its main mechanic involves sending out various elements to retrieve objects or cause damage. However, the enemy fortress also does the same and it’s here that the rock, paper and scissors element comes into play.

Each of the castles have a set amount of lives, indicated by wooden signs that hang outside of each installation. By hitting the opposing castle with an elemental value reduces this score and reduces the castle to rubble when it hits 0. This provides you with a variety of attack options. However, you also need to take your defence into account when being attacked. By using the concept of a combat wheel, each element can be used to cancel out attacks or destroy them. This strategic element of play comes in the form of water beats fire, fire beats earth and earth beats water. For example, should your enemy launch a fire attack, you can launch your own fire element to snuff out the flame, or you can send a water attack to completely destroy the opposing element and continue its path to cause damage to the enemy castle. 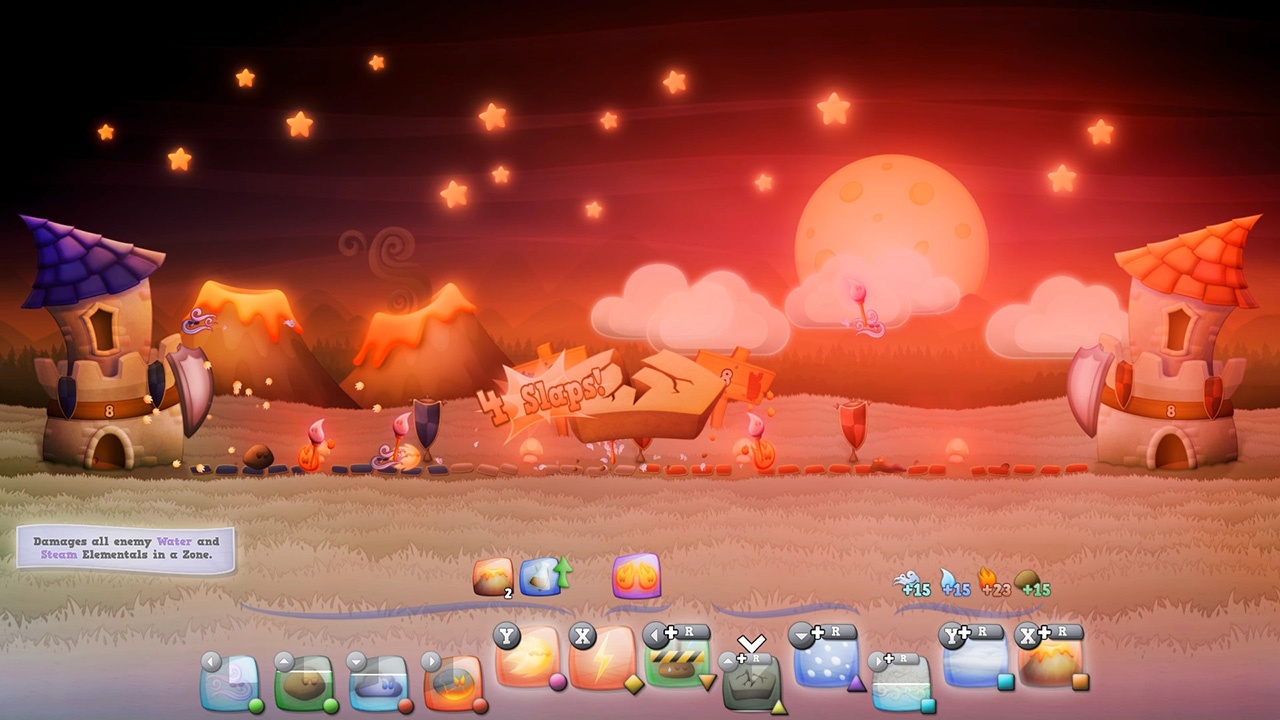 It sounds a simple premise and in its basic form it is. However, once one element is despatched, you have to wait for the other elements at your disposal to recharge. Varying factors can come into play here, altering the recharge values of various elements, as well the use of buffs, spells and level designs that can alter these frequencies. It all adds to produce an air of urgency as you prepare attacks, as well as keep an eye on what you need to do in order to defend yourself.

Everything starts smoothly enough, but soon takes a turn towards a challenging aspect with the introduction of alchemy to produce a wide variety of elemental spin-offs. By winning bouts, you are rewarded research points which can be spent in the laboratory. Here, you can add two elemental values together to create new ones. For instance, mixing earth with fire produces lava and mixing water with clouds produces rain. Each of the concoctions you produce work on a tier level, with your basic elements at the lowest tier, with more extreme varieties increasing through the levels.

There are over one hundred and eighty different varieties that can be created, each of them having various effects such as health increases, defensive covers and more damage output. This mechanic of the gameplay completely open up the game with a huge amount of depth and strategy in the selection of elements you take into battle with you. Again, the various forms of elemental weaponry or defences at your disposal differ in their recharge values, so it’s vitally important to try to create a selection that varies to your advantage. However, this also increases the difficulty of the game ten-fold as, with so many forms to choose from, finding the right balance can be a daunting task; although in theory, it can also add to the longevity of the game as you experiment with various loadouts. 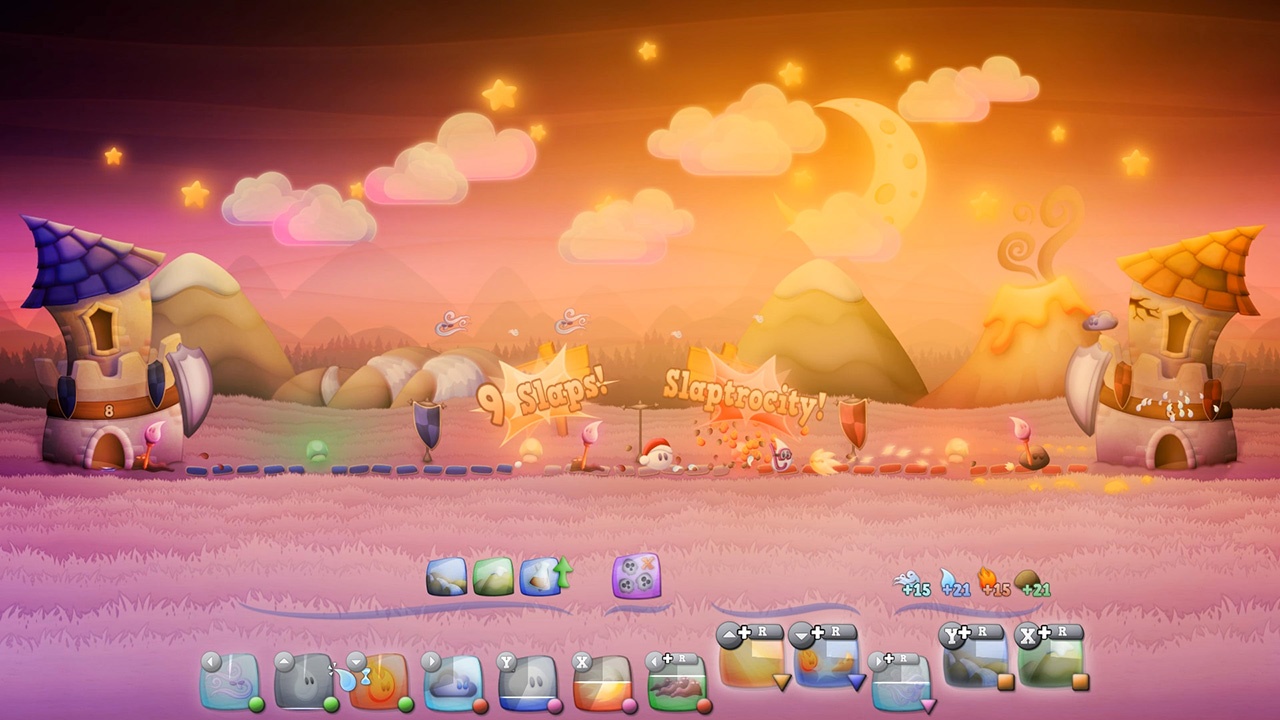 The game pits across a number of levels, each one containing a variety of game modes or restrictions to test even the most battle-hardened players; from the simple battles that involve demolishing the enemy castle first, to the cat-and-mouse style of play in capture. Some levels even contain global effects that can speed up certain elemental productions, or severely hamper the effect of others. In a way, it helps to keep things fresh in the general mechanics of the game as, despite its varying themes, soon becomes a mechanic that grows old, fast.

Playing against an AI opponent provides a decent challenge on the easy levels, its competitiveness increasing slightly on normal. However, on hard mode the AI is unforgivingly relentless in its strategy, forcing you to grind in order to gain enough lab points to create the more powerful elements. This in itself is no easy task either, as creating new elements is a very hit-and-miss mechanic; often producing results that bear no fruits and wastes valuable resources. You can be awarded clues to help in your research, but again, this can be a very hit-and-miss exercise.

Although very strategic and containing a good variety of depth, the simple mechanic of just sending various elementals back and forth soon grows tiresome. For all of its components, it’s just not very exciting to play, despite its level of urgency with each battle. Even in its capacity for local multiplayer, everything just feels a little lacklustre to have any real lasting appeal. It’s a shame really, as there is a really decent game in here trying to get out, it’s just that it doesn’t seem to be able to find its own way. In a casual setting, there is some good entertainment value here, but over the long-term, doesn’t contain enough excitement to grab you and pull you in. If you’re looking for a quirky game that is a little different from the norm, then this is a sound purchase. However, if you’re looking for more, then the elements of this game will produce a flame that quickly snuffs out.