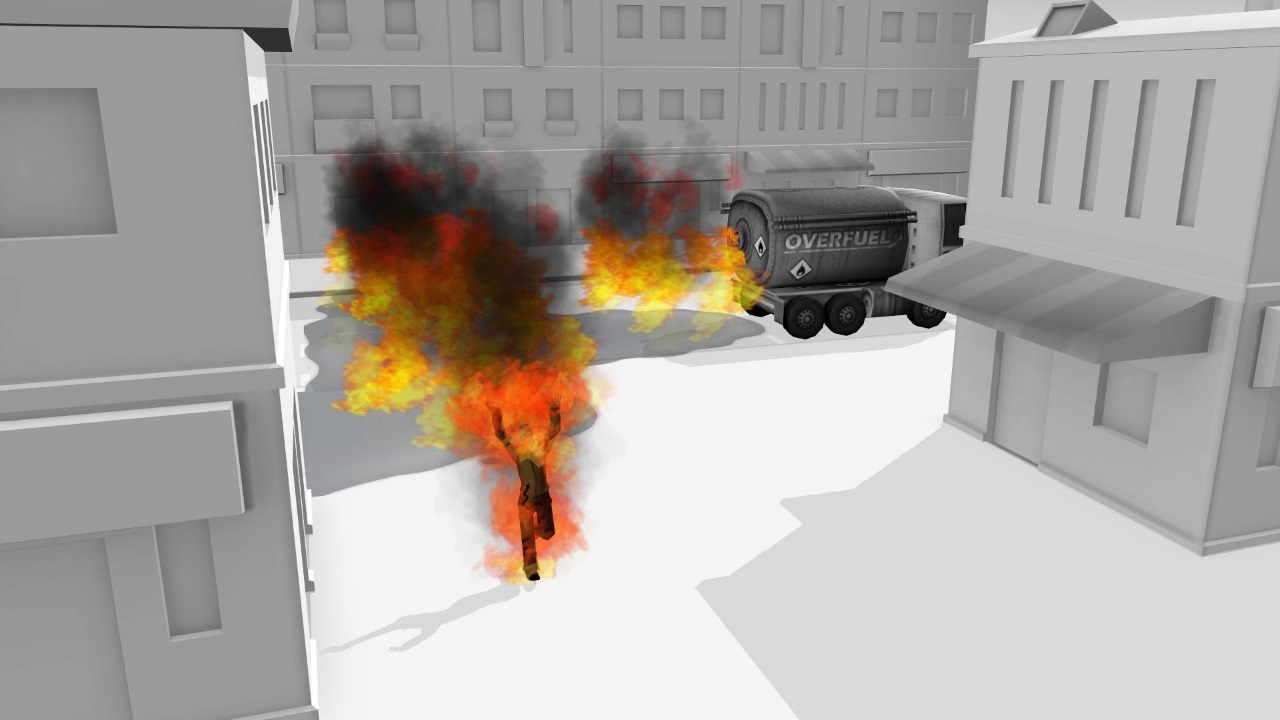 A games’ title needs to tell you what the game is about. In the case of ‘Kill the Bad Guy’ from developer Exkee, it is very on the nose. The main idea is, you guessed it, kill the bad guy. While the backstory as to why this so-called bad guy is a bad guy, it sets up in such a way that it doesn’t really matter. You don’t feel much for any of the characters in a way that most games try to these days. Most levels end up with you trying to imitate Elmer Fudd or Wile-e Coyote as you wrap a piano in rope and wait for the bad guy to walk underneath.

It reminds me a lot of old school games on websites like Miniclip, games like the Sniper Assassin series; simple art style, puzzle games with the end goal being the death of a target. Instead of being a game with a compelling story, characters you care for, or photo-realism graphics, KTBG acts more of a stress reliever. Somebody cut you off on your drive home? Drop a piano on a bad guy. Your boss didn’t approve your leave request? Hack a car and flatten the bad guy as he wanders through the town. It works wonders, and the ragdoll physics are a joy to watch as you run him over, drop a heavy object on him or harpoon him. 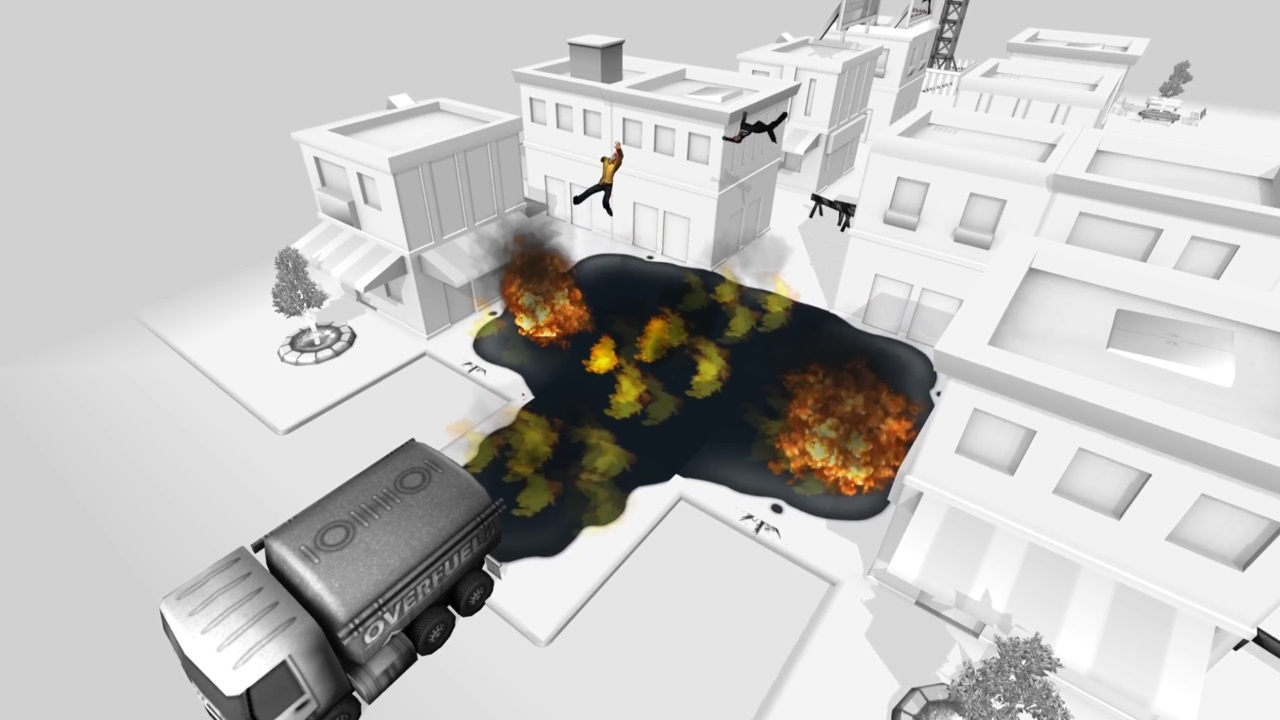 This isn’t a kids’ game by any means. Blood comes pouring out of the victim with every strike, screams can be heard echoing around the town, even the soundtrack has some vulgar language. You are part of a secret assignation guild with the main mission being to kill every bad guy who got off on a technicality, was part of a terrorist organisation or parked in a handicapped spot at the shopping mall. Everything happens in real-time but you can pause time and fast forward time to skip the part of your target walking to your elaborate trap. With an impressive 60 levels (split into 6 chapters, 10 levels in each), each level is no bigger than a couple of city blocks. The greyscale design makes the useable objects stand out with the objects being black and everything else being a shade of grey. The bad guys also stand out clearly, sporting a colourful jacket and a face with a target painted on. Not forgetting the bright red blood that smears its way across the map as your victim is taken out.

The controls are a bit to get around, but once you do, it makes sense. Thumb sticks to move around the map, buttons to manipulate the traps and the triggers to activate some traps. The area of success is quite large, with the hitbox for the bad guy being quite a bit bigger than the character itself. You don’t get any “just missed me” moments unless you are miles off! 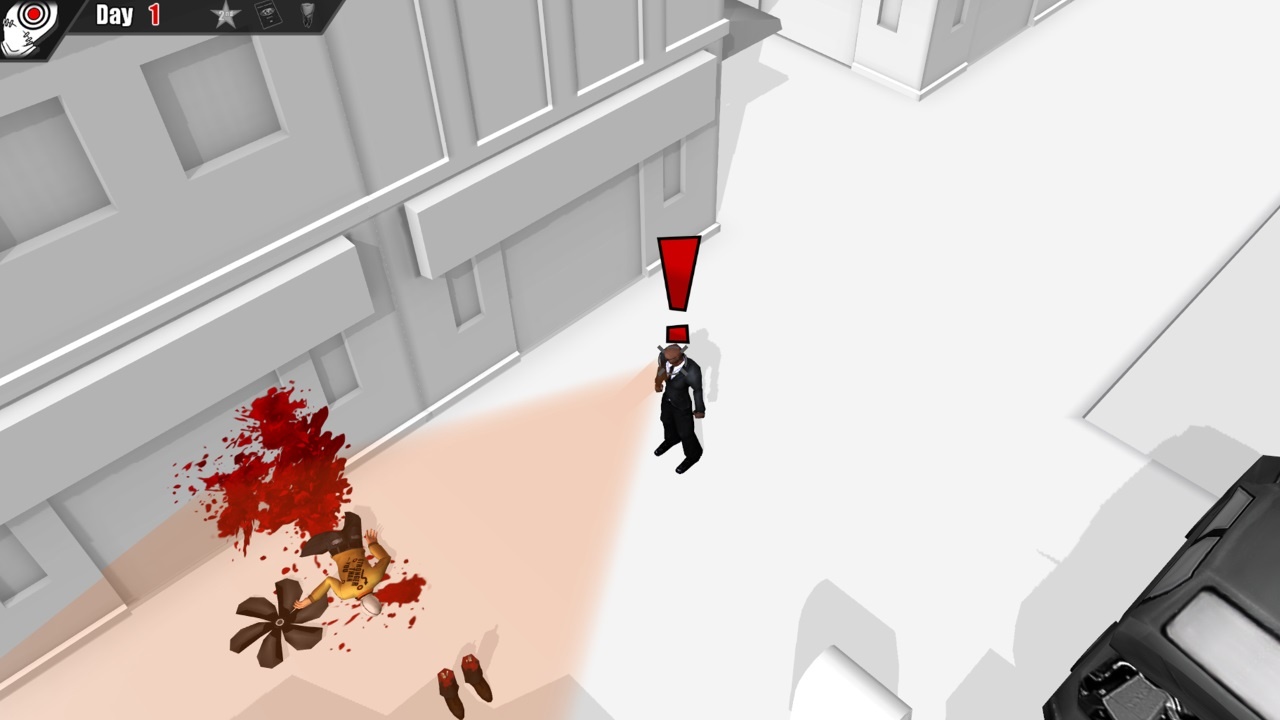 A drawback is the replayablity. Sure the levels are, for the most part, unique and offer a different scenario, but the over-the-top ragdolling, and even the art style, do get repetitive. It’s hard to explain, but I found it hard to do along play session and just found myself getting bored. It is an engaging game in short bursts and with its levels being as short and sweet as they are, with the longest levels being under completed in under 10mins. The dark humour sometimes goes a little too far. Bad guys are given biographies in the splash screens before each assignment. Most are irreverent and goofy, but some reveal that you’re taking on too-close-to-home villains like one of the Columbine killers, serial killer Albert Fish, and even Hitler. Profiling these real-life monsters with the game’s blackly humorous text can be a little off-putting. The biggest issue in my opinion is the platform. Sure it feels ok on the switch as opposed to the pc, but I feel it would be far better suited to the mobile platform.

Kill the Bad Guy is an intriguing puzzle game with fun physics and goofy plans to get the desired result. The style of the game is good in short bursts and work wonders for that built up aggression we all get from time to time. The impressive amount of levels also helps with most requiring a new way of thinking, even if you end up using the same weapon/object in multiple missions, it somehow still puts a smile on my face when I jimmy up a piano hanging form a building and then dropping it like an evil character from a Looney Tunes show. It is a fun game with a decent amount of replayablity.