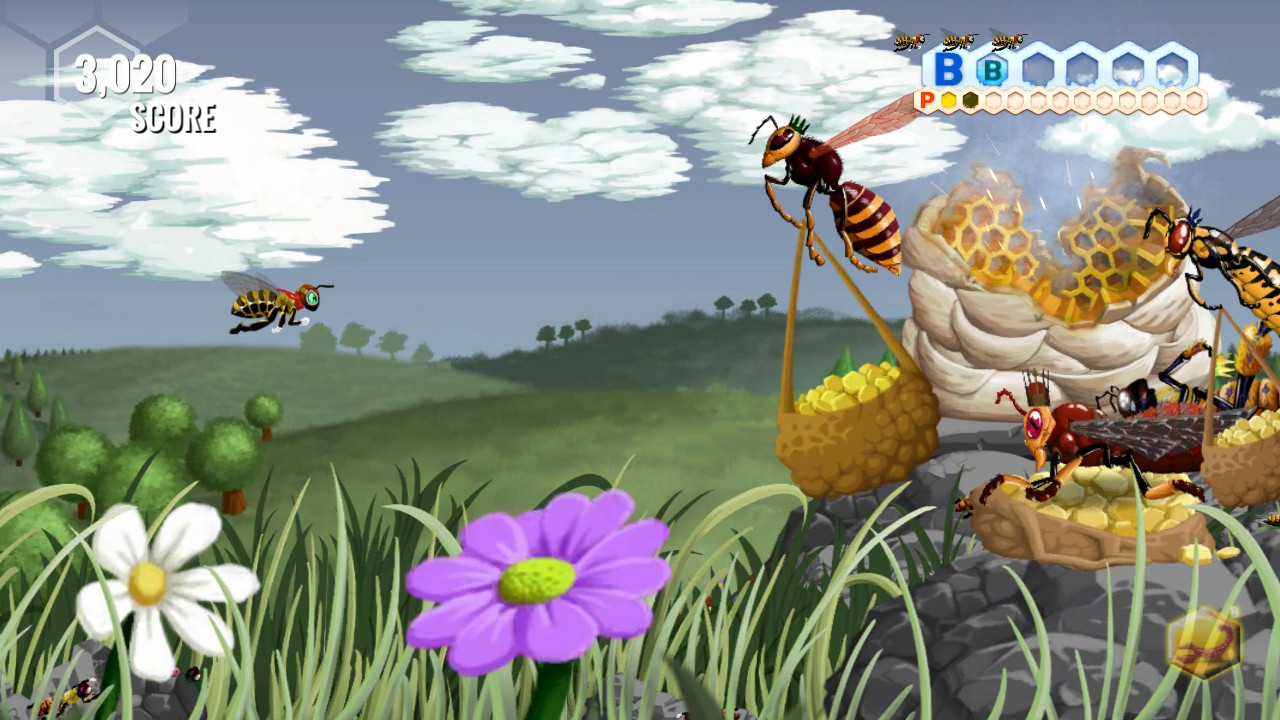 It’s sometimes hard to get into certain shoot-em-up games because the story is either extremely convoluted, strangely told or is otherwise completely insane. Take Ikaruga, for example: amazing game, brilliant mechanics, easily one of my favorite shmups of all time. I couldn’t tell you the details of the plot without consulting some kind of online repository of information, but I know the ship’s name is Ikaruga and that’s really about it. But you don’t need to know the why as long as the how is great, or at least that’s how I view it. Still, having a clear path of reason and meaning helps you stay involved, and I have to hand it to Beekyr Reloaded for crafting the most logical reason for a shmup ever: revenge.

Beekyr is just your average drone bee, out on the lazy pollen hunt, when he returns to find his hive razed. Like, seriously, it looks like vikings broke into the damn thing and murdered everyone. But it wasn’t vikings, it was evil wasps and hornets, and they also stole all the honey and pollen that everyone had collected. With her dying gasp, the Queen Bee orders Beekyr to get back what was taken from them, and I can’t help but feel that maybe making a new hive is more important right now? Anyways, that’s someone else’s job, and Beekyr is off to absolutely stop some heads, busting through about eighteen stages, three world’s worth of mayhem and bullets to avenge his hive. No clue what the end game here is, but I’m all aboard the revenge express!

Beekyr Reloaded was originally created by KaleidoGames and has been given the Switch treatment thanks to AkaOni Studios, who did a good deal of work to bring this hybrid shmup game to the console (and also inserted their mascot as a playable character). This Reloaded version is a massive improvement from their original mobile game: the graphics are substantially better and more insect-like, the controls are tighter, there are tons more hidden objects to destroy and increase your score and there’s even more secret character that can be unlocked upon completion. I call Beekyr a hybrid shmup because each of the world’s goes through a variety of stages: horizontal shooting, vertical shooting, vertical escape and horizontal escape. The main idea in each of the worlds is to make your way to the bastards who did this to your hive, murder them, steal back your honey and get out before the birds realize you’re there. Oh, and there are six goddamn levels of difficulty to choose/unlock, so that should be an indication right there of the level of serious nonsense you may have to deal with. 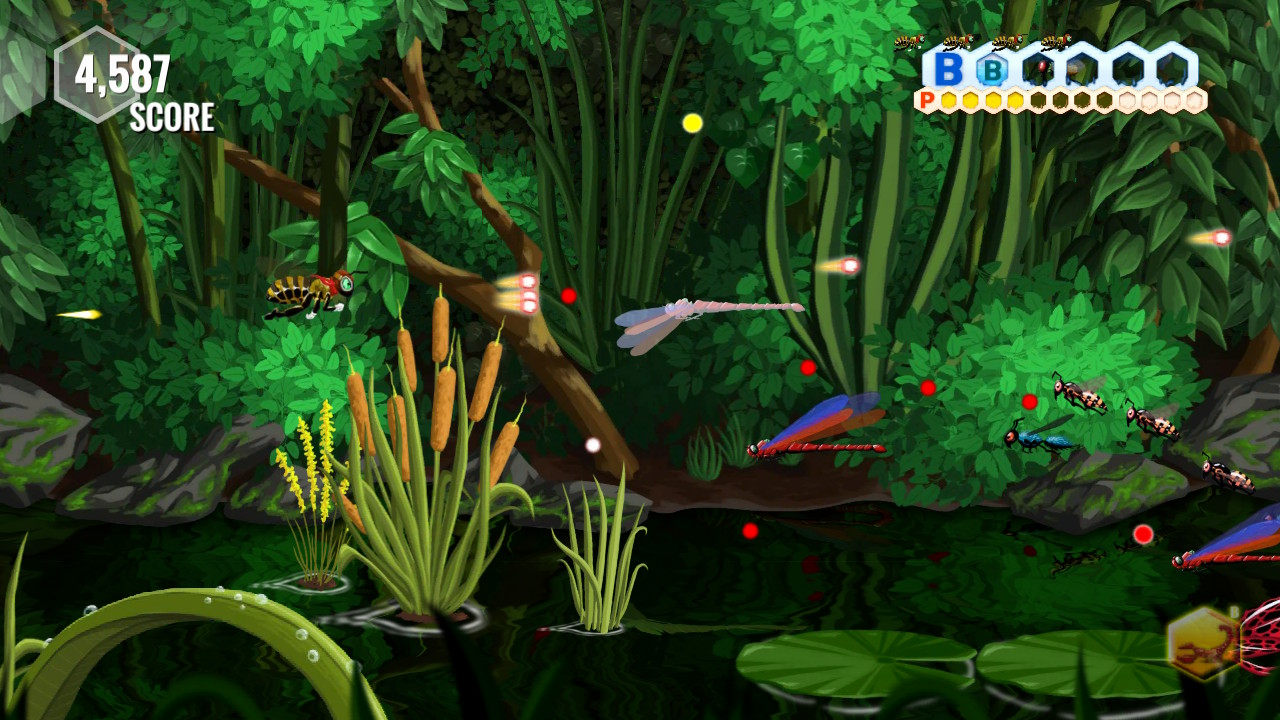 Right out the box, I want to say that the variety of Beekyr Reloaded is what kept me engaged from start to finish. I love shmups, but they can get repetitive, even with good level design and creative enemy usage. But, thanks to the Beekyr formula, I changed up my approach every few minutes, giving me a chance to flex and keep nimble. The horizontal shooting is obviously the game’s strong suit, as most bosses, the escape levels and a majority of the traditional stages are all horizontal. But having the vertical was a nice change of pace and the frantic nature of these stages (shoot enemies, collect pollen, unleash bee hell) was a strong balance to the slightly more slow and humdrum pace of the horizontal levels. The vertical escapes were…they were okay. Dodging birds isn’t my idea of a good time, especially because they apparently don’t notice or care about the other bugs still around (and shooting at me!) but whatever. And the horizontal escapes…let’s get to that in a moment.

In terms of difficulty for bullet hell as a bullet hell, Beekyr Reloaded is pretty well-balanced, giving players a beginner mode that challenges them to learn the ropes and a normal mode to figure out how hard things could be. You can’t just jump straight to the elite modes of difficulty, but, rather, you need to beat the game through on the lower levels to unlock the higher ones. I’m not a huge fan of this approach simply because I’m sure some players will be mildly annoyed to run through the game without feeling properly challenged. But the game isn’t terrifically long (no shmups are, I’m realizing) so it won’t be a huge speed hurdle, and it will give you an opportunity to see how things work out, mechanically. Some shots can be dodged, and others can actually be shot out of the sky. Some enemies that appear stationary will stay that way, and some will intermittently break off to attack you or flee. You naturally want to get that high score, and finding out which enemies are more worth your time (frogs, yes, scorpions, no) will help develop and hone that. Not to mention finding those secret paths I had mentioned before. I let one of my friends give this a whirl and he discovered that you can actually avoid a particularly difficult log sequence as long as you’re fast on the trigger and carve out an opening early on. Good find!

Additionally, Beekyr Reloaded does a ton to encourage development of shooting skill. Sure, gotta take out the enemies, but did you know how many bullets you waste when you just lean on autofire? Turns out it’s a lot, because you get an accuracy percentage at the end of the stages. Now, newcomers to the game and genre shouldn’t worry about this initially, because it’ll screw up you finding your style and rhythm. But for players who are old hat to shmups and want to really challenge themselves should take care to try to conserve bullets for when totally necessary. The multiplier from destroying enemies is great, but the one from having a high hit count are even better, and you’ll want those extra lives kicking around for when you have to deal with the Boss Wasp and such. This is by no means the only game to have ever included such a counter, but I really was surprised to find it in Beekyr, and it let me know how seriously KaleidoGames takes their dedication to shmups. 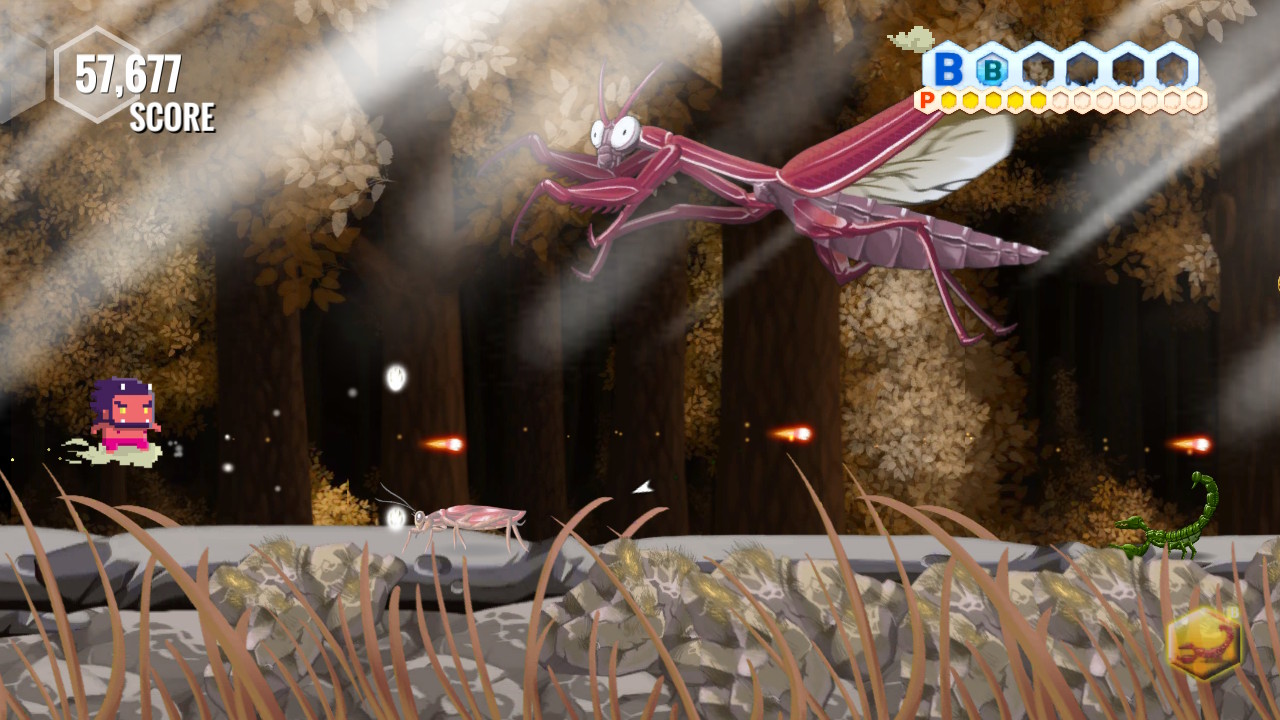 The bullets are not a problem: the scenery, however, is a different matter entirely. Due to the fact that Beekyr Reloaded takes place in nature, there’s plenty of sequences where you have to contest with rocks, tree branches and the walls of a hive which cannot, under any circumstance, be touched. The hive makes sense: you always do the horizontal escapes in the hive, and it wouldn’t mean much if you didn’t have to weave through tunnels. I wasn’t crazy about the low light situation, though, and it felt like it added an extra layer of unnecessary difficulty that had nothing to do with bullet dodging. And as for the tree branches outside, well, I was really frustrated to see that  the enemy insects could hunker down on the exposed wood and bark but I couldn’t. Again, I wasn’t sure which were going to take flight, and it was far too risky to get that close to the wood and possibly get tossed around by a gust of wind. I did really love the inclusion of these natural elements to affect the game itself, so I can’t be too mad at it, but dammit did I lose a lot of lives when I thought I was free and clear from the scenery.

And the soundtrack! The soundtrack for Beekyr Reloaded is pretty rockin’ and awesome, with some serious notes to indicate when a boss battle is about to begin. If the game was a touch longer, I would say the music got repetitive, but everything coincides and lines up perfectly. When you get it, you know it, and when you feel it, you love it. Beekyr Reloaded knows what it wants to sound like and it delivers that portion magnificently.

All in all, this is a really good shooter, and I’m surprised that it had such humble beginnings. I honestly thought this was a reboot of some obscure Japanese shooter from the early 90s, not a mobile game from five years back. The asking price is perfectly fair, and, between the hidden characters, the higher difficulty and trying to up your accuracy, you’ve got a ton of replay value on your hands in this title. I say give it a try, admire the HD Rumble, do NOT turn on the Retro filter (it really makes things look ugly instead of old school) and get ready to murder some bugs for the Queen!