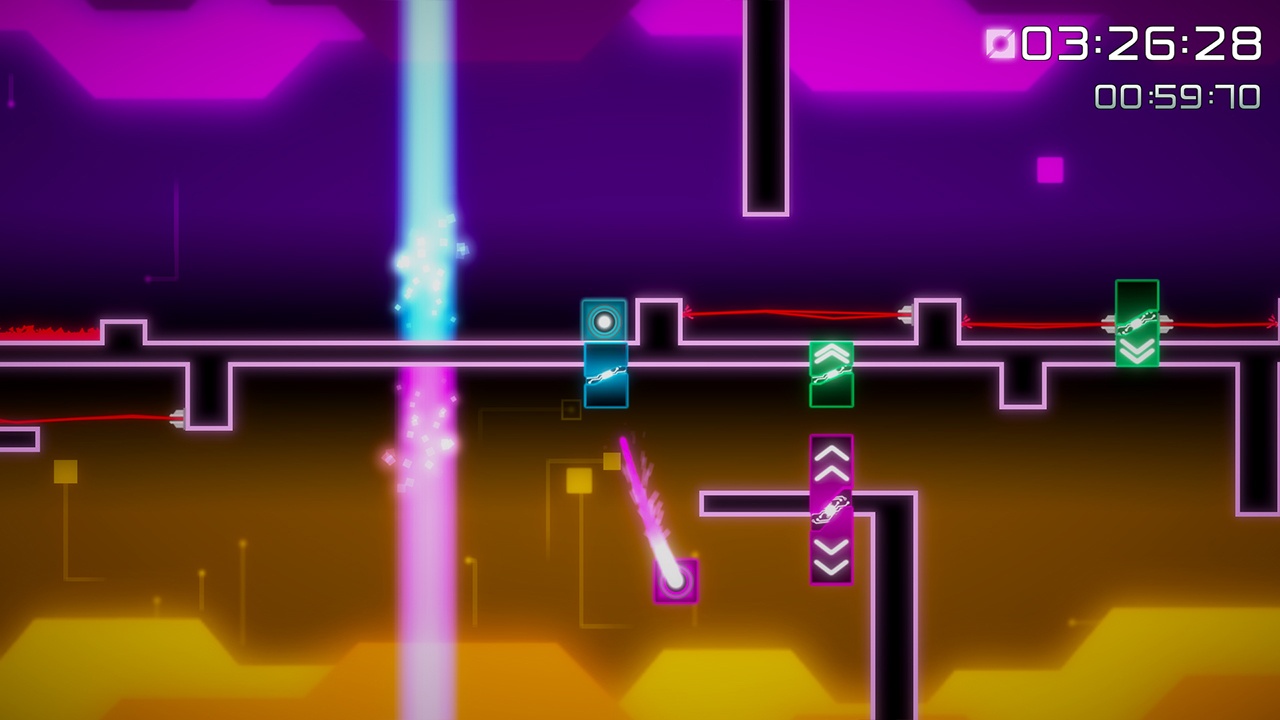 In all worlds of media and information, there is something to be said for brevity. We often want to make sure our points and ideas can be easily expressed to another person, and, though long reviews and explanations are pretty, they usually make you pretty bored. In short, keep it simple so everyone can make time to read. But you have to be careful: not everything can be boiled down to the bone, like the infamous one word movie review by Leonard Maltin. Sometimes you need a bit more in the story to stand out or even get recognized. Ultimately, it’ll be the succinct nature of Parallel that leads to this game’s undoing.

Parallel is an interesting puzzle title that doesn’t really have a story or plot, more of an overarching feeling. You and a friend play two blocks that seem like they’ve come to life and separated themselves from the grid of a massive, cyberpunk-ish computer system. Working together, you have to pass through barriers, lasers, pitfalls and traps to make it to the other side. However, this is not a job that you can accomplish by yourself: teamwork, usually requiring split-second decisions and reactions, will bring you home.

The core idea is to have two lanes of gameplay going on top of each other, with player one taking the top lane and player two running the bottom. Parallel keeps things incredibly simple: you move, and you jump. When you jump, you can still move. On occasion, you’ll be asked to jump quickly, at which point you discover that holding the jump button creates repetitive movement, ideal for multiple platforms. Additionally, you’ll soon discover what I call the launch jump. A platform between the two lanes will be stood on by one player, the other jumps onto the platform in their lane, and the first player will jump almost in tandem, allowing themselves to be propelled higher than normal. This is something that you end up using a LOT in Parallel’s multiple worlds, so it’s best to get good at it right away, especially if you want to beat the clock. 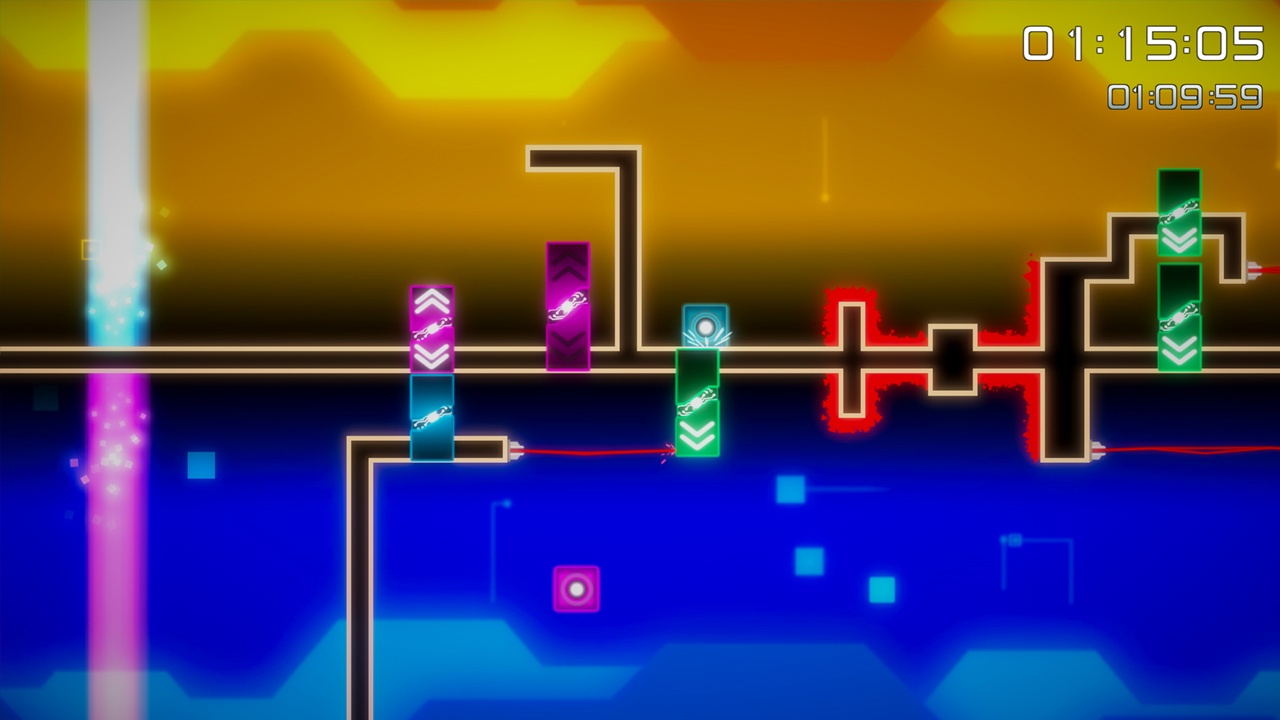 There are certainly some good points to Parallel. For one, I rather enjoy the driving, neon-laden appearance of the game more than other simultaneous puzzlers. In other games, I feel like there’s been a larger tilt towards delivering a more “artistic” experience, with things such as The Bridge or Semispheres, and that’s all well and good for people who want a little existentialism with their coffee. For me, I’m a huge fan of the flash and darkness a la Neon Chrome, so this puzzler feels like an extension of that. Additionally, the way the logo for Parallel just pulses on the screen between levels is something almost lascivious, which means I should probably talk to my therapist again BUT it’s still really cool. When you’re mixed up in levels of death lasers and trails of color, it all kind of works out in a grand way.

Additionally, Parallels has just a huge amount of work for players who become invested in the game. With over seventy levels, I think I was a bit surprised by what the game demanded from you even in the first level. You see, most of the time, these puzzle platformers give you at least one or two super simple levels to get your bearings, in which you basically need to move straight or jump just a little and then that’s it. A real underhand toss if I’ve ever seen one. That’s simply not the case in Parallel. The first level, the very first one, asks you to do basically everything that you’ll be doing in subsequent levels, and it really puts you through the wringer as a result. Not only are the levels plentiful, there’s also time limits for each one to get different colored medal rankings. And there’s no “finish in twenty minutes” to get a bronze medal bull here: silver alone is a serious demand, often pegging these huge levels at a minute or less. You can absolutely perform and achieve these times a well…if you play by the game’s rules.

See, unfortunately, this is where Parallel deviates a lot from these other “simultaneous movement” type games. With things like Death Cubed or Semispheres, you often can do all the action by yourself unless you specifically move into multiplayer modes. You could technically cheat and offer a second JoyCon to a friend to make it easier, and then you’d have the satisfaction of gaming the system AND getting the best time. But, despite the possibility of playing solo (which you can do 100), Parallel really, really expects you to grab a friend to go through these levels. This mentality accounts for the vastness of the game and also the inherent difficulty. When you have two players, you can get through probably the first ten in under eleven minutes without breaking a sweat or even needing to communicate much. But, if you approach puzzle games like a hermit, then you’re going to have an exceptionally rough time, as plenty of moments require you to think fast in two different planes. Having to master this style of execution alone is a bit difficult, but then you’re being prodded and called to by the target times, which are outright impossible as a single player doing double duty. 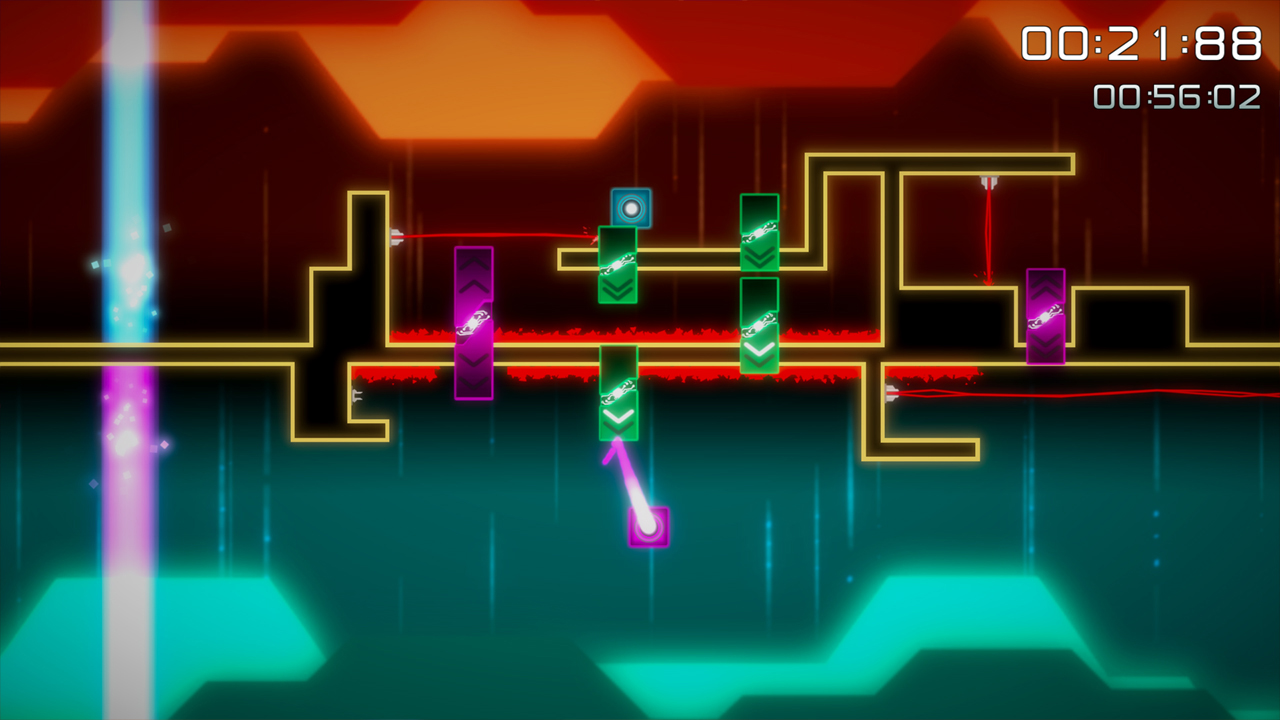 And I know that seems like a petty complaint, but take a look at these screenshots. Look at how it looks online with the trailer from the Nintendo eShop. You wouldn’t be the only person to assume you can do it alone, and, hell, it’s a puzzle platformer: most people interested would WANT to do it alone. Instead, you’re condemning yourself to either leaning on another person or, worse, burning your life down to the quick as you run levels again and again, chasing that target time that I’m seriously not sure you can accomplish as a singular person. Players need to beware of these things and scroll all the way to the bottom of the page where it says “2 players simultaneous” and notice the lack of “single player” anywhere on the screen.

Lastly, I’d like to say that Parallel needs to deeply rethink its name and hook. At the time of writing this review, Parallel has been out for over a month and I have seen zero mention of it anywhere. The main reason is that Parallel is an INCREDIBLY common and simple title, and the word parallel has been used time and again in reviews, critiques, opinion pieces and YouTube videos concerning the Nintendo Switch vs. basically anything else. This lovely game, which has a lot of genuine development and thought put into it, is being buried by the simple fact that words are recycled far too much online. Sadly, drawing parallels with other things, especially concerning Nintendo, is a well trodden trope, and Parallel is getting left behind in the process.

Still, for people willing to take a chance and dive into this Nintendo Switch exclusive, you’ll find some pretty sharp level design, good execution and compulsion to keep going. Parallel may not be the most memorable title, but it really does have some great puzzling at the core. Maybe rename it Tandemnity?