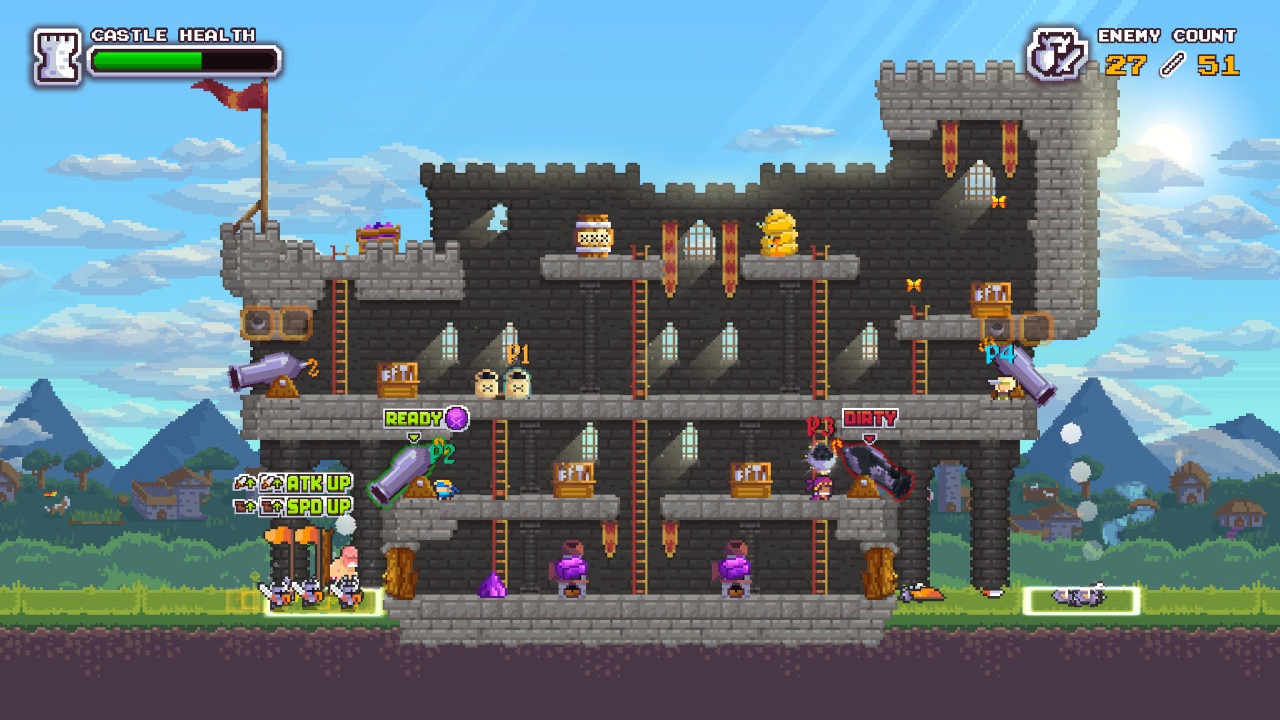 Everyone looks at the Nintendo Switch differently. Some people look at it as the natural evolution in Nintendo’s ideology, and rightfully so. Some see it as the bridge that finally brings other AAA titles to Nintendo fans, and Panic Button is certainly dead set on that (seriously, so excited for War Frame!). And, for some, they see it as the new group gaming machine. The GameCube, the N64, even the Wii (to a lesser extent) were all those wonderful machines that really inspired and encouraged co-op gameplay. The Nintendo Switch is doing a bangup job of bringing back that mentality, especially with the single controller that can easily become two. Well, Mad Mimic certainly thinks so as well, because we now have the maddening multitasking No Heroes Here, and it reminds us that, not only is gaming with friends fun, sometimes it’s necessary.

The King of Noobland lead an undefeated army far and wide, keeping his people safe and secure in battles thanks to his Medallion, his Crown, and his Teddy Bear. Sadly, one day, the king lost all three items, and the results were devastating: nearly all his heroes fell in battle. The very last hero of Noobland has been sent on a quest, far and wide, to reclaim the lost artifacts of the king and bring back glory and honor (and victory) to Noobland. The hero spent many moons, far from home, traversing dangerous mountain paths and bleak landscapes, to finally arrive at a castle at the ends of the world. This could be it, this could be the salvation and the clue the hero needs to finally set things right.

Nope. You’re inside. You. The player and maybe their friends. And the great hero unceremoniously takes an arrow to the back, dies, and his ghost now has to task you with taking up his charge and bringing back the power to Noobland. Hopefully you’re up to the challenge, because it’s a hell of a difficult world out there, and you want and NEED to get things done, because, hint, every bad guy wants Noobland to fail. And if you’re helping Noobland, they want you to fail. Fail to death. They’re going to attack you a lot, is what I’m saying. 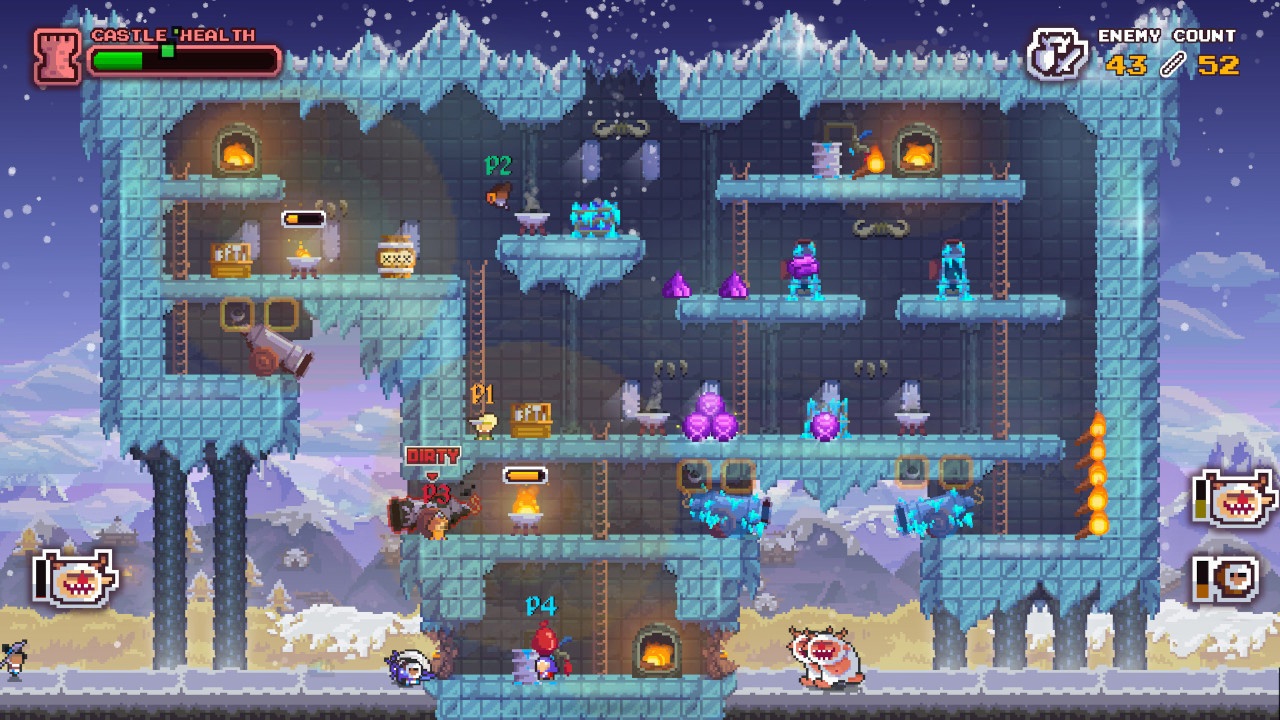 No Heroes Here is a cooperative defense game in which a player and up to three other players are defending against a siege of incoming enemy forces. Unable to leave the fortress for fear of being stabbed, you must arm, fire and maintain weapons of different types (all through cannons) in order to fend off the waves of very angry, sometimes very large enemies. But all the material has to be synthesized: that is, you can get raw gunpowder, but you have to process it at the workshop to make it usable. Cannonballs start off as raw ore that gets smelted into good iron, and then needs to be workshopped into ball shape. And, once you fire the cannon, now it’s all dirty from gunpowder. You gotta clean that thing up before you go shooting it again! All of this is happening while pixel enemies are closing in on you, sometimes from all sides, and you simply gotta take care of them. Do you see what I’m saying here? It’s a co-op time management sim, and holy crap it gets brutal.

Now, for the single player out there, I have to strongly, STRONGLY advise against this game. No Heroes Here definitely scales the difficulty so that you can play the game as one person, and it gives you a swap mechanic so you can control one other puppet player to multitask as best you can. However, it’s really quite boring and mundane when you take all the things I mentioned above and dump those responsibilities on a single person. You run around frantically, grabbing everything you can, trying to pick it up, manipulate it, refine it, put it over, shoot, clean, repeat, and it’s seriously exhausting. While this is happening, your castle is basically being piddly plinked by little teams of archers and knights, occasionally a single big brute, and it’s almost annoying instead of stressful. The fun of the game simply does NOT convey well in single player mode, and even veterans of Diner Dash aren’t going to enjoy the level of complexity it presents you to deal with alone. Especially not when the game introduces more complex shots.

Now, having said that, No Heroes Here is fantastic when it comes to local co-op. The castles, the levels, the game itself is expertly designed for great communication, good work flow and hilarious situations when something goes wrong. The easiest way to win is to assign roles and have everyone stick to them, but we all know that isn’t going to happen. Sometimes someone drops the ball (literally) and now everyone is scrambling to fill in positions. Friends are yelling because no one is making gunpowder. You’ve fired six honey shots in the same spot and the foes aren’t slowing down anymore. Two people are scrambling up the ladder to grab the top cannon and no one cares about the brutes coming from the underground path. It’s utter madness, and it’s expertly fun in the way it’s crafted. 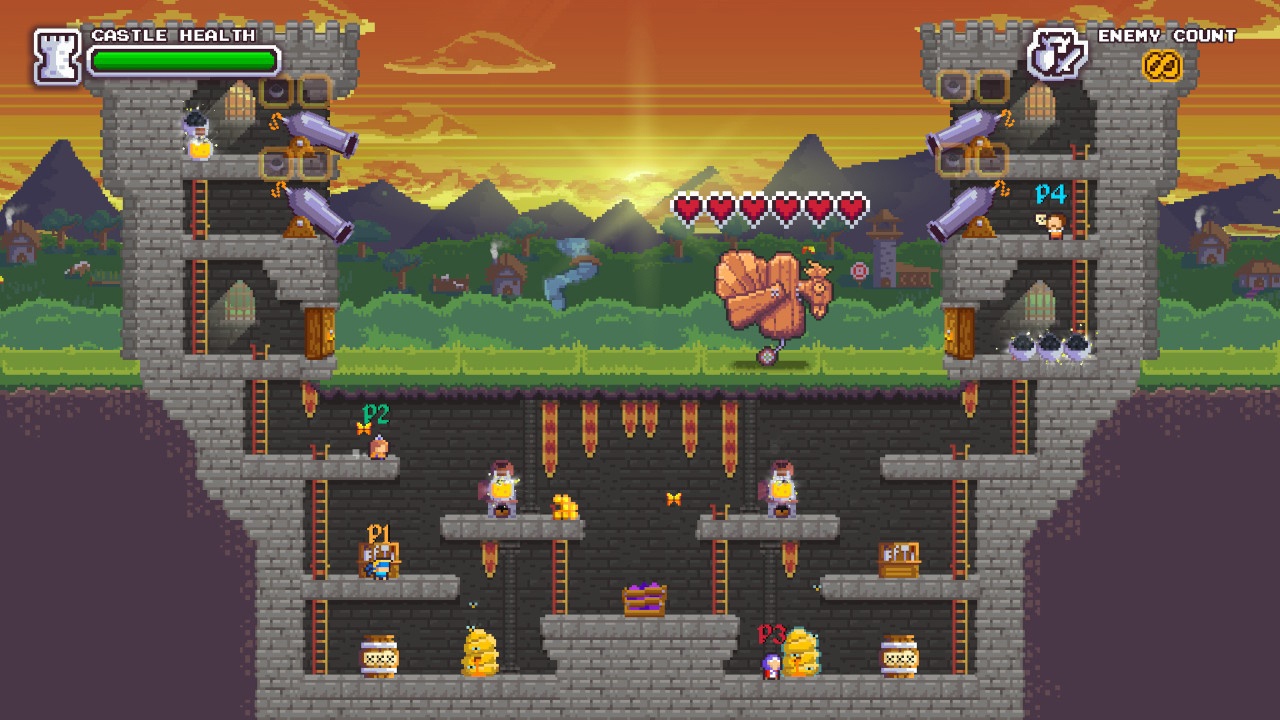 That’s because Mad Mimic understands the key to enjoyment with No Heroes  Here is light confusion. Everyone is allowed to choose the same character if they want to (who doesn’t want to be a princess?) and only a slight color variant will let you know if you’re looking at you or your friend’s avatar. Conveyor belts can help move supplies quickly, but a lever adjusts the direction and sometimes that’s the opposite of what you want to happen. You can make a huge store of supplies if you’re lucky, but it’s not like you can mass load the cannons: you gotta take it one shot at a time, and who knows where that’ll lead? And I can’t even imagine playing this online (which is an option!!) because I need real-time, face-to-face communication to direct everyone and make sure things are clear. The difficulty seems to scale accordingly with how many players you have working in the castle, but I recommend always having four if you can: more hands means better survival rates and more fun.

And the enemies offer such a great variety! From the archers to the flag bearers, you get the idea that even the little shock troops are gung-ho and excited to try to attack the castle, and that’s before the big boys show up. Massive brutes with battering rams will take two shots to lay down, which really screws up your flow and ideas. When you hit the first boss, which I can only describe as a trojan chicken, things get completely insane, because you’re used to solving all your problems with two cannonballs max. Having a moving, undulating target that has a six health bar goal while it’s actively destroying your castle is great fun, and a huge challenge for players who aren’t great with flexibility.

Lastly, No Heroes Here has ported PERFECTLY to the Switch. The simplistic button layout is comfortable with two JoyCons and even works well with a singular JoyCon. Install size is fairly minimal, at just over 400MB, and runs smoothly, even with a ton of pixel people and explosions happening all over the screen. There wasn’t a crash, a slowdown or a lag that I had the whole time I played, and I don’t chalk that up to simple graphics or anything condescending. This is simply a good job from the publishing team, and kudos to Mad Mimic for continuing to accomplish things solo. There’s no shame in leaning on a publishing team, but I have to give props for the original PC devs making the game leap onto the Switch.

All in all, No Heroes Here is so much fun and excitement…with other people. That’s the only caveat, and it’s a stickler, especially with the burgeoning return of the single player popularity. I sincerely cannot recommend this to be played solo, but highly promote it for teams of two or more. Get three friends, get four JoyCons, get a bulletproof shield for your Switch so nothing gets smashed, and then go have a great time. Get back those relics for the king, and for God’s sake, don’t forget the roasted chicken!