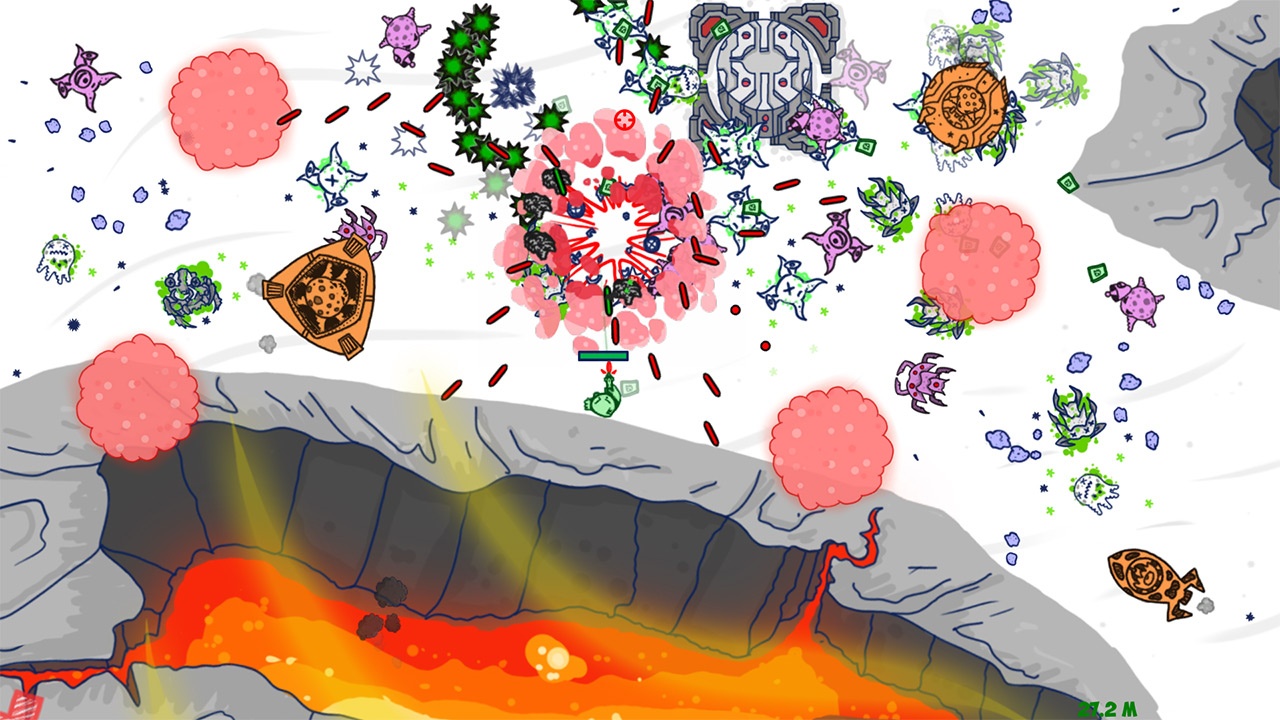 I seriously love seeing little games from forever ago get reworked and rebranded and built into something otherworldly. When you look at something like 20XX, you can trace the lineage back to years ago, when Steam Early Access first allowed it to take shaky, blinking steps into the sunlight, and look at it now: ruling Pride Rock and murdering its uncle (citation needed). But other games had also had their fair share of growing up and traversing, and anything that once got published by New Reality Games and is still standing has got to have some spark inside. From the insane mind of Lapovich and brought to the Switch by Sometimes You, welcome to State of Anarchy: Master of Mayhem.

State of Anarchy was, originally, a ridiculous little twin stick shooter that showed up on the Steam storefront two years ago with a dollar price tag and terrible graphics. Then, last year, the developer went all-in, created a bigger game with more enemies and weapons, called it “Master of Mayhem” edition and charged a modest four dollars for it. The purpose of the game is to simply survive and get to the next level. Chaos and, well, anarchy has exploded across the streets, causing everyone everywhere to arm themselves to the teeth and try to take your dumb ass out. Why you? Who knows and who cares, it’s an all out brawl in the best possible way. Ammunition is not a concern. Gasoline is not a concern. A morality compass, logical thought or any sort of actual questioning to the state of things is not a concern. And, best of all, the Master of Mayhem edition for the Switch quickly decides to go wildly off the rails when aliens become involved, and you know how I feel about aliens. Wait, you don’t? No, of course not, why would you, I’ve literally never brought it up. They add something to games, and it’s usually a good element that ducks around the deus ex machina role and just inject more madness. And that’s spot on here.

Before anything else, I’m going to address the graphics right at the top, along with the soundtrack. Easily, these are the two things to take the most issue with, and they’re the two things that, I feel, add the most charm to this game. It looks like State of Anarchy was hand drawn on an edgy 11 year old’s notebook, and then that kid suddenly got a ton of funding for a game but zero help with artistic direction. But I use eleven as that magic number because there is blood and violence in here, but it’s akin to the blood and violence you might see from someone who understands “action” but not really anything anatomical or medical. Compared to the visceral level of what you see in Guts and Glory, State of Anarchy has small, red splotches to represent bodycounts that would make the original Grand Theft Auto seem like Manhunt. Far from appearing childish, the artistic approach to State of Anarchy is the perfect balance to keeping the game as light and fun as possible: if anything were more realistic or even more colorful, it could easily turn the corner into being something grotesque and 18+ rated. I still don’t think you want to let your 6-year-old run around loosely with the game, but I would be alright with an upper elementary schooler playing it with some clearly defined ideas about why guns are bad outside of games. 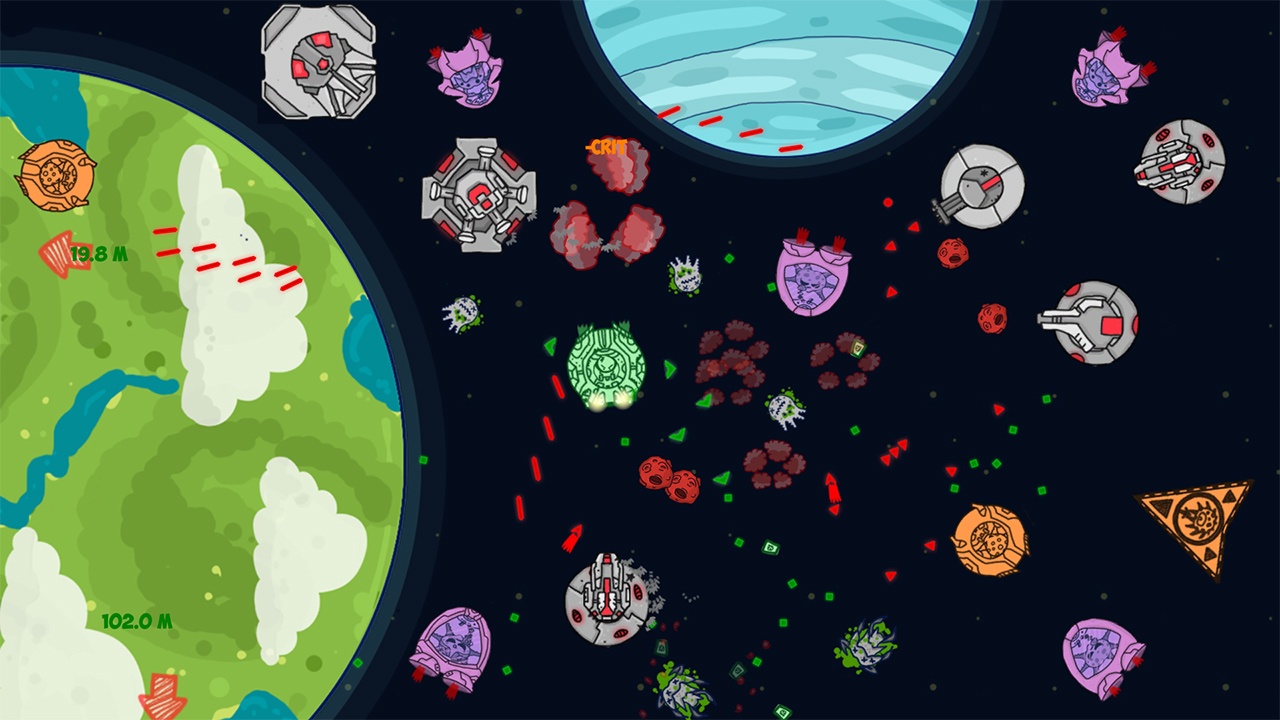 The soundtrack, additionally, is the most spastic, juxtaposed sort of music that you can imagine for a majority of the game. When you’re running around on the street, it’s almost like two bands are competing to decide of the tone is dark or light. Entering a car turns everything into a zany, Benny Hill-esque adventure, further reinforced by the fact that it doesn’t seem like your car can really be damaged (more on that in a second). When you encounter a stage boss (usually a jerk in a bank or a jerk alien in a spacecraft), it turns into this heavy metal guitar riff, like you’re actually fighting the lead singer of Mastadon for the last piece of fried chicken from a KFC Family bucket. Having said that, there is a good variety to the soundtrack, and most of your encounters will only last a minute or so before the music changes, so you won’t have to listen to much for long. And I do actually like the jarring, bizarre choices, but I know that’ll put some people off.

So, actual gameplay. State of Anarchy presents as a twin stick shooter, but the balance for it is wildly out of proportion for what most twin stick shooters would ask. For one, the enemy density is rarely enough to overwhelm, and, when it gets to that level, there are plenty of escape plans and ways to survive. You don’t have to worry about bullets, but you also, interestingly, don’t have to worry about special ammunition. You get “alternative” guns early on, and you can fire them with the R button, whereas your standard gun shoots automatically, whichever way you point the right joystick. You can just keep mashing that R button as much as you want, and it usually will keep firing (but not nonstop). Additionally, once you get into a car, the game is completely in your pocket. Your car will drive through most anything, and they even let you know, between loading screens, that the car is bulletproof. Other cars are NOT, oddly, and you can either ram them repeatedly with your car or lean out the window and shoot them to hell (who needs a copilot?), and you’ll want to destroy every car you can. Cars are some of the easiest EXP to gain, plus they usually drop a fair amount of cash.

The cash and EXP lead into level ups and perks, which you can either purchase or gain every couple of levels or so. Cash-based perks directly affect your shooting: amount of damage, critical rate, fire rate, etc. EXP perks are things like health, run speed, and activated effects, like a rage trigger that gives you five seconds of heightened damage and rate of fire. Theoretically, due to the neverending spawn of enemies, you can easily grind your way up to ridiculous proportions before even facing the first boss: there’s no time limit and no shortage of bullets, so the only hurdle is your patience. But you’ll be able to level up at a steady rate as long as you don’t go out of your way to AVOID killing people on your way to your mission objectives, which are helpfully outlined with pink arrows and a distance counter. I personally felt like there’s a decent balance between what you can get with a ton of cash on hand and what you just need to wait and get through patience and gameplay. Early enemies aren’t that rich, but killing aliens on their home planet gets you a fair bit of bank (why do they use the same currency as Earth, though?). 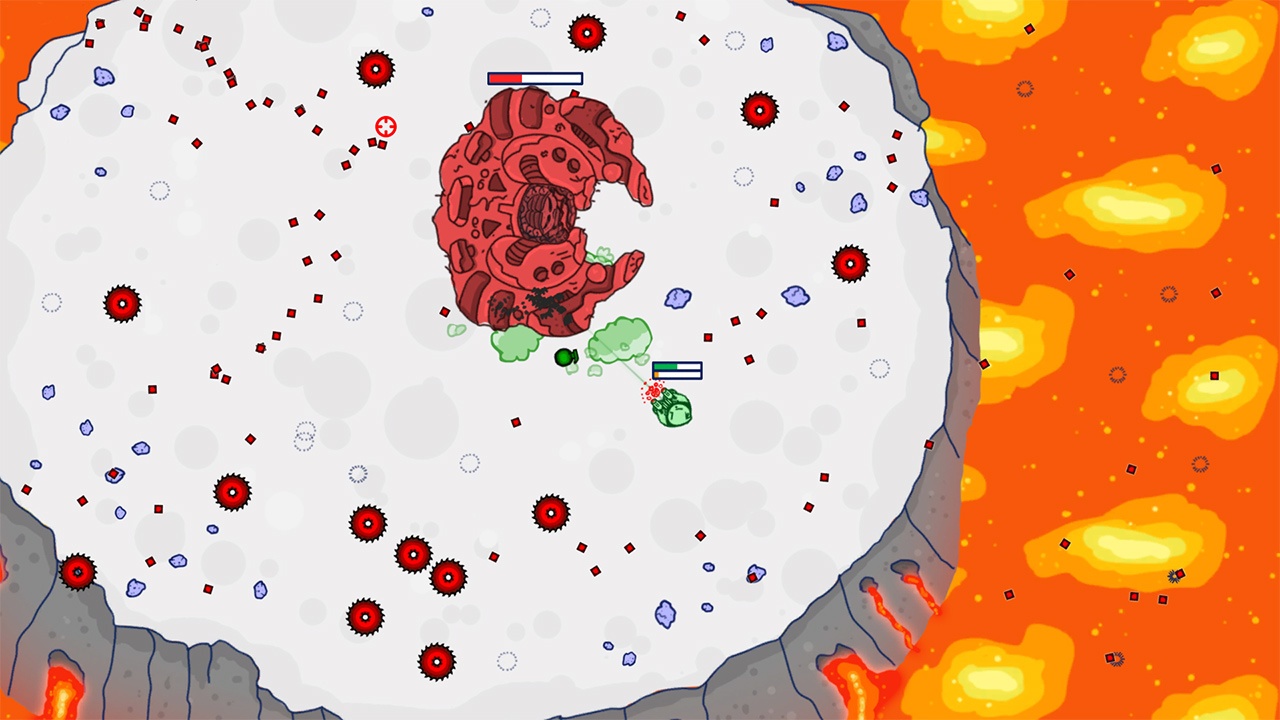 But the strongest suit of State of Anarchy is it’s bullet hell component, which would probably surprise people who are merely glancing at the game. After you meet your first alien boss, it becomes clear that you’ve got to be more than just a schlub with a gun to actually make it across all 48 stages. Being able to weave through some tight, dense bullet curtains is crucial to finishing the game in once piece, especially since you can’t control the way that weapons change for you. You’ll automatically upgrade to whatever weapon the last boss dropped, so don’t get too attached to a singular style or type. Instead, invest your money in the run speed and get good at knowing your hitbox, because State of Anarchy needs you to step it up and be real with the steal. I loved the fact that I’m playing this hilarious little PC title, on my Switch, and I’m counting on my JoyCons to be precision perfect so I don’t take about thirteen triangles to the face while I wait for my rage meter to refill. It’s really fun, and really satisfying.

The only downside to State of Anarchy: Master of Mayhem is the Switch price, mostly because it’s twice what the PC version costs. This is a cool game, but I don’t know if I’d call it a staple or a must play for anyone. Having said that, this is definitely better than it appears, and it’s got the staying power and replay value that I’ll be keeping it on my Switch and revisiting it from time to time. If you simply cannot justify the price, sit tight: Sometimes You is good about sale prices, and you may see a discount come down the line. However, in respect for the game and the devs, I would recommend picking it up at full price if you’re at all curious. It’s cheaper than a movie ticket, and you’ll get many more hours of fun than Boss Baby 2: The Crappening.