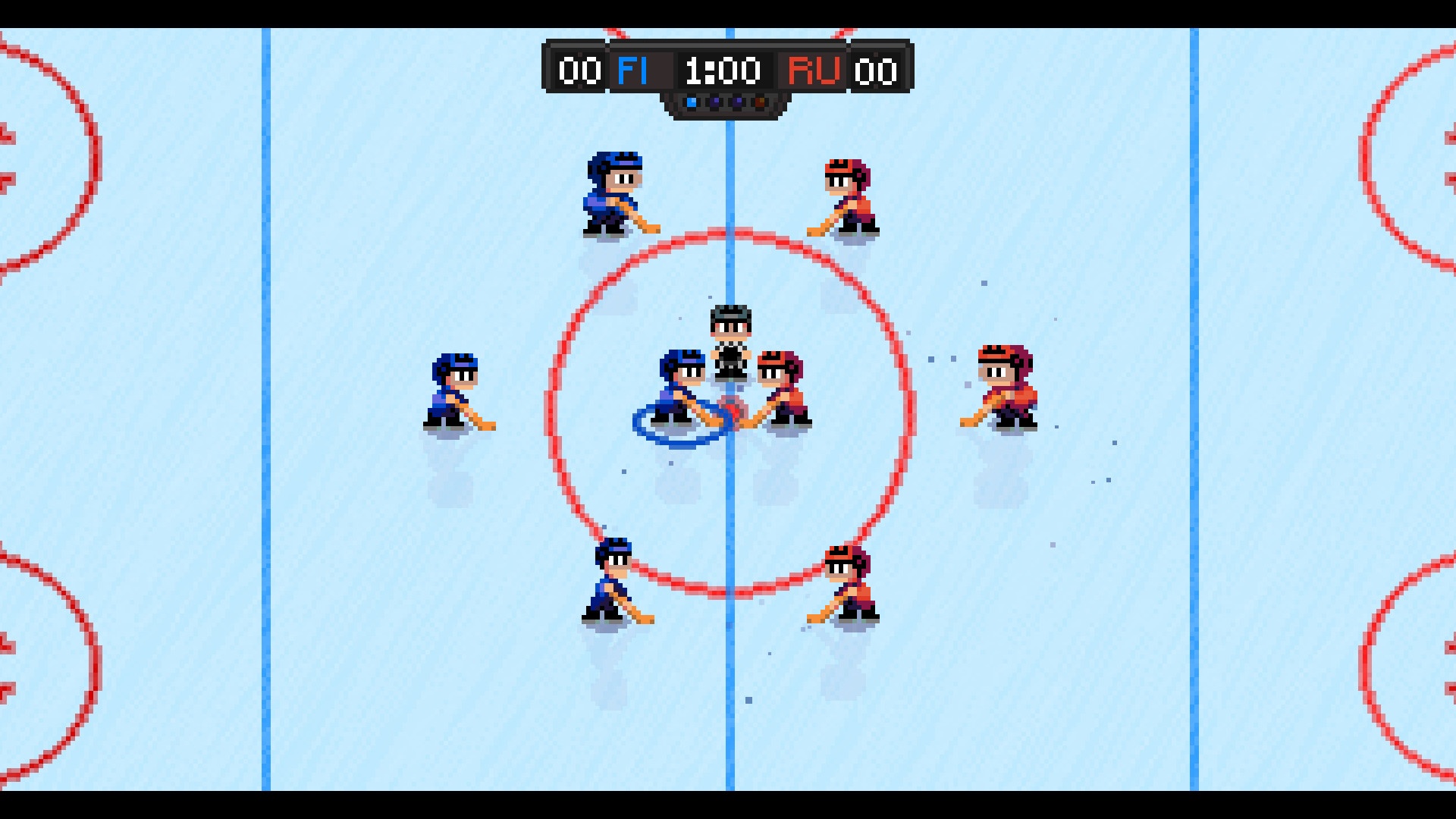 Super Blood Hockey is an addictive indie game developed by a one-man team. It’s an 8-bit homage to the (nearly) forgotten glory of 8-bit arcade games – evoking nostalgia, but also the taste of blood from being punched by your opponent during a sports fixture. It’s hockey but not as we know it!

For anyone scratching their head as to why we need another hockey game when we have the NHL series out there, Super Blood Hockey chops out all the nasty technical bits and opts for a pixellated, top-down view of the action. It’s full of charm and has plenty going on – really making you feel like you’re watching an end-to-end game of hockey every time you play.

Super Blood Hockey boasts several different game modes including exhibition mode, tournament mode, 4-player local multiplayer and challenge mode – where you can play 4 vs 8 or 12 vs 12 opponents. Super Blood Hockey also has a ‘tutorial’ now, where the coach barks at you for ‘sucking at the game’ enough to need a tutorial. He also talks about the golden age of games where players accepted that it was hard and learned how to get good rather than having it all done for them – a sentiment aimed at many modern gamers I’m sure… 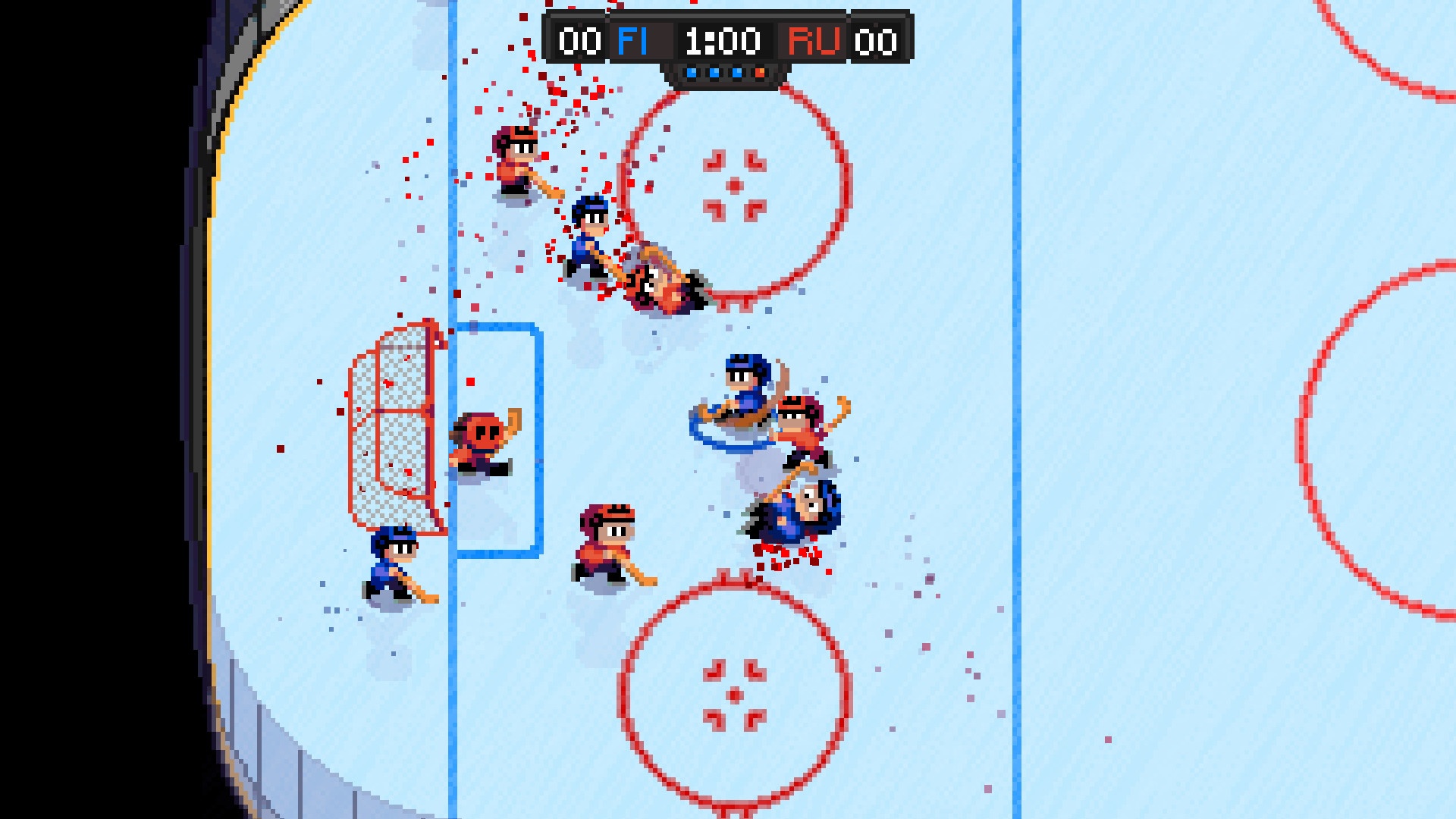 Super Blood Hockey has a charming 8-bit art style as previously mentioned, which means performance on the PC is great and works really well with the overall theme of ice hockey. The different types of player are easily identifiable, so you can tell your big bruiser of an enforcer from your sniper etc. The game also draws on classic such as Splatter House, to include some intense pixellated blood and guts – including a gruesome ‘Game Over’ screen if you lose, where a Zamboni will run you over and blood goes everywhere… It’s actually not that violent, just a comical over-statement about the violence that goes on within real ice hockey.

The music is really cool in Super Blood Hockey – really hitting those nostalgia notes from arcade classics, although it did remind me of Sonic for some reason. Overall the music is frantic and indicative of fingers tapping away wildly to get the upper hand on your opponent. It’s exactly what the game needs to keep the tempo up and to make the player feel like they’re at the arcade once more.

Normally with this type of 8-bit game you’d expect the visuals and the music to be the key feature – evoking a sense of nostalgia and charm that some of us miss in modern video games. That said, the best part of Super Blood Hockey is the gameplay and control mechanics. 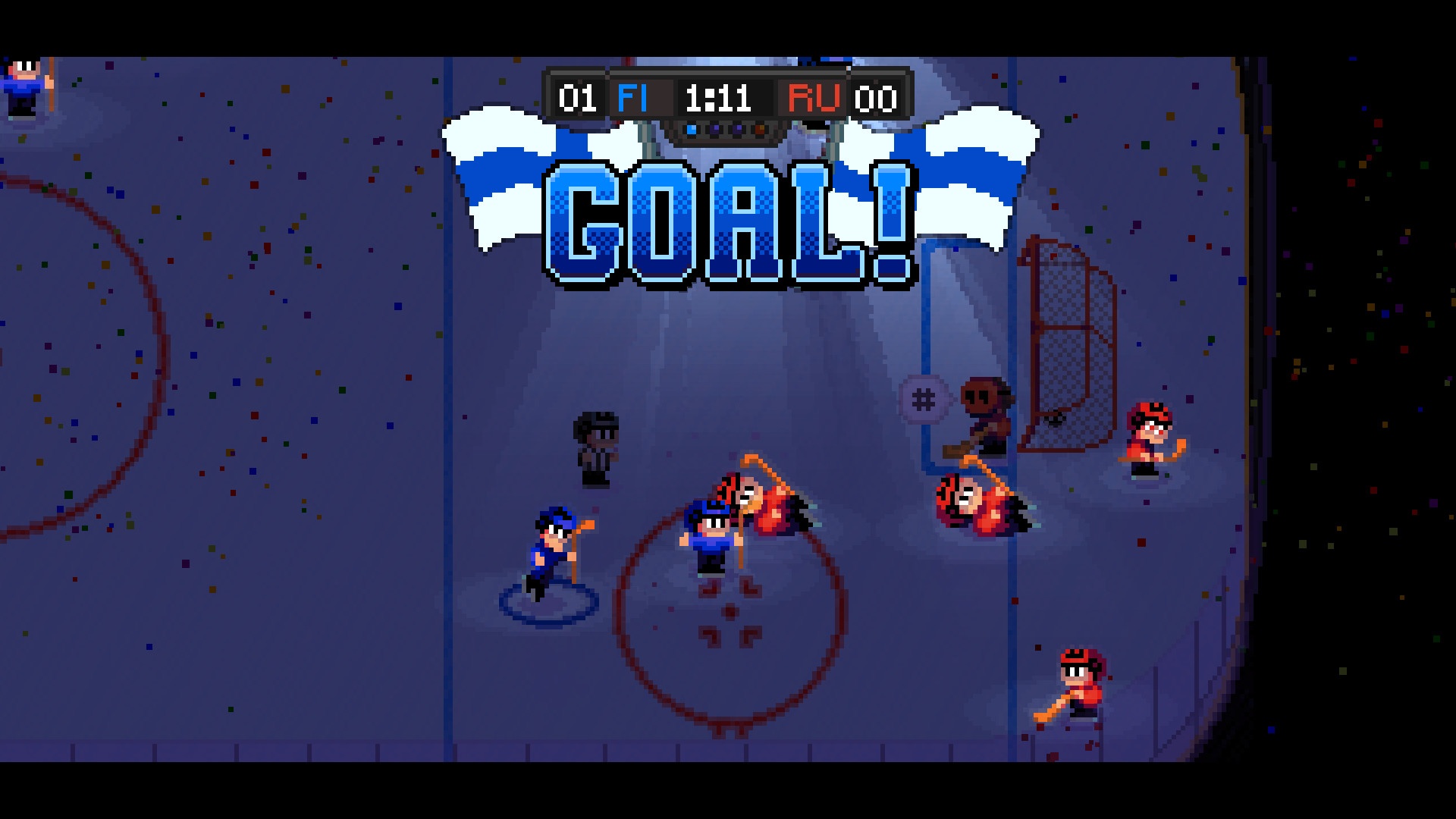 Players handle as you’d expect for someone on ice, with a little lag when changing direction and a continuation of movement before losing momentum. The passing and shooting work well, with some degree of freedom so that if you’re not accurate enough you’ll miss the goal or be dispossessed by your opponent. The slickness of the control mechanisms allows for precise play that can actually look as majestic as real hockey when it’s done right. It’s here that Super Blood hockey really shines – making the game undeniably fun and satisfying.

A little touch I really enjoy about Super Blood Hockey is the fighting mechanic – you can’t have an ice hockey game without one! Instead of going one on one with an opponent, you fight the entire team until there is one man left standing. The winner gets a powerplay for their team, so the player is rewarded for winning the fight, as opposed to the more ummm, traditional hockey rules – again it all makes for a frantic game where skill is required to gain the upper hand.

Overall, Super Blood Hockey is absolutely worth the money – costing a measly £5.59 on Steam. Whilst we love a bit of old-school 8-bit graphics and music, it all comes down to the fun factor. If you like sports games or not, Super Blood Hockey is really fun to just pick up and play – harder to master though. The slick gameplay makes for an immensely enjoyable sporting experience, that’ll have you throwing your keyboard or controller out of the window, but laughing whilst you do it!