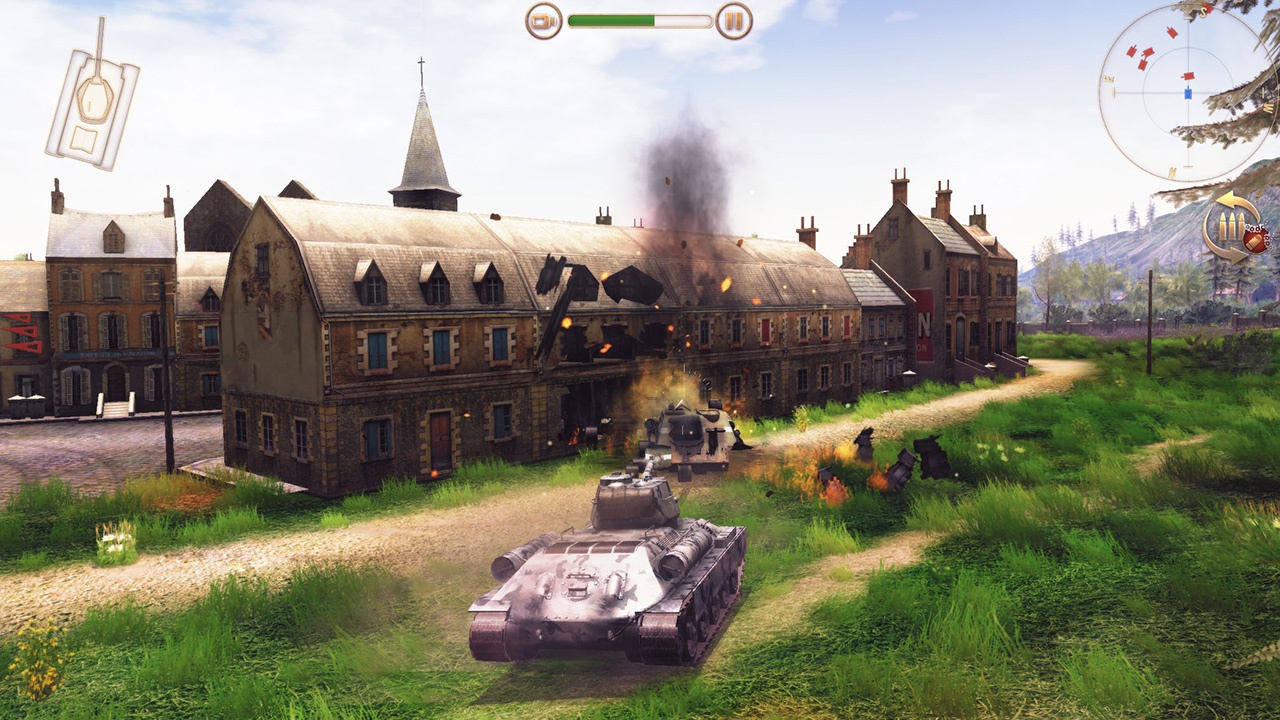 Despite its horrific nature, the depiction of simulating warfare within video games attracts quite a large fan base. Take the Call of Duty franchise, or Battlefield series of games for example; each of them boasting record-breaking figures in popularity, sales and online populations. It’s not that all gamers love war, but in a virtual setting it does create an exciting premise. The latest title to simulate such an experience, comes in the form of Atypical Games’ Battle Supremacy, a tank warfare game that has rumbled its way onto the Nintendo Switch.

Set during the campaigns of the second world war, Battle Supremacy mainly puts you in command of a selection of nineteen tanks, each one set on real-life models and from a variety of different countries; although a handful of missions also put you within the cockpit of an MTB, or motor torpedo boat, troop transports and fighter planes. Its campaigns take place over the islands of the Pacific, villages in France, the deserts of Africa and the cold winds of the Russian front. A total of twenty-missions, some of them multi-branching, require you to advance on targets, hold or defend strongholds, secure beachheads and eliminate artillery, to name but a few. They also task you with both night and day scenarios, as well a range of vehicle procurements to add a touch of variety to the proceedings.

Each of the missions can take between five and fifteen minutes to work through, giving a total playtime of around three to four hours for the whole campaign. Depending on your mission performances, you are awarded a series of three medals, gold, silver and bronze respectively, as well as XP which can be used to unlock tank models and purchase upgrades. It adds a touch of depth to the gameplay, as well as some variety to the different classes of tanks that are available to you. 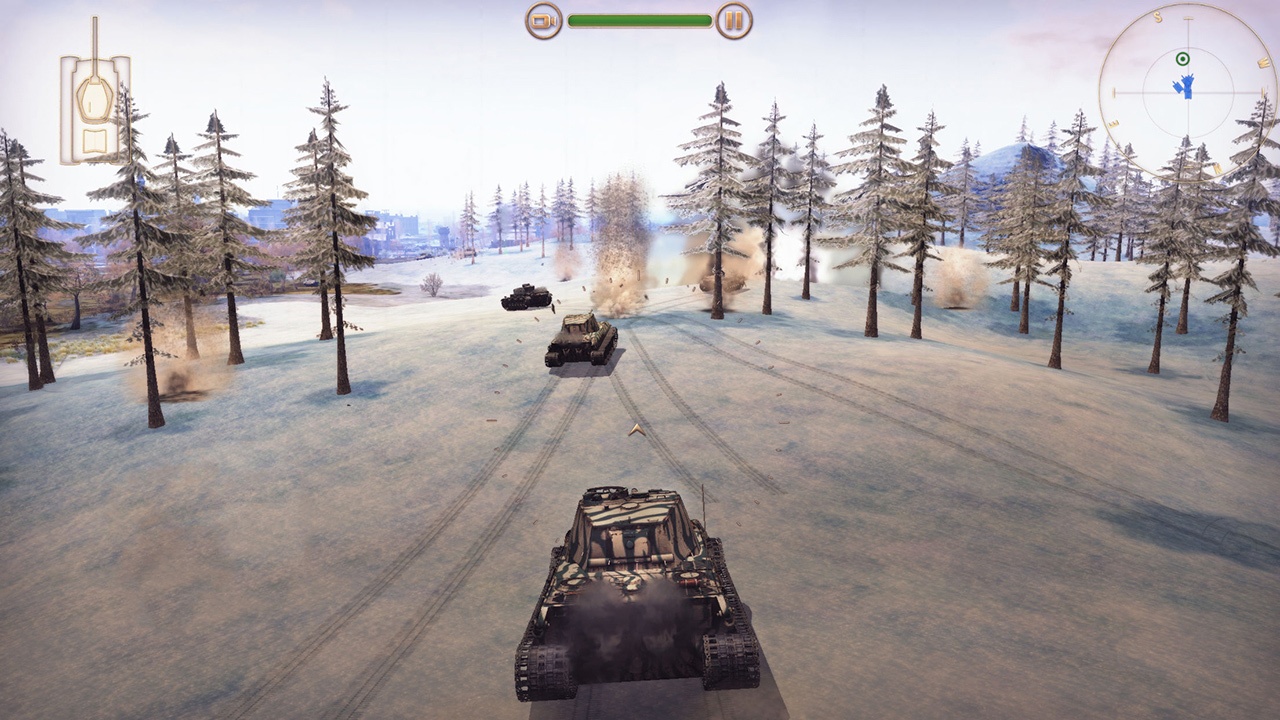 Missions are played out over some respectably large and detailed maps; although its aesthetic largely retains the look of its mobile origins. However, they’re suitably realistic and offer all types of terrain to traverse over; as well as destructible environments and weather effects. Handling is generally okay, particularly so when it comes to tank warfare, with forward, backward and turn mechanics being utilised with the left thumb stick, whilst the right rotates the turret. ZR fires your shells, whilst ZL toggles a zoom function for pin-point accuracy. However, when it comes to taking control of other vehicles, such as boats and aircraft, the control mechanics can be hap-hazard at the best of times, with an aiming mechanic that never feels under your control. It doesn’t detract too much from the overall experience, but does require some getting used to as it switches from the relatively tight mechanics of the tank.

As you’d expect with a tank warfare game, each mission largely involves stand-offs with enemy armour and artillery, before advancing to other positions, highlighted by green smoke signals, in order to push back the next advance of enemy tanks. For the most part, everything works quite well and provides a good experience in the tactics of tank warfare. However, a few technical hitches do arise at times, with oddly behaving vehicles, textural pop-ups and the odd frame-rate stutter. Again, it doesn’t detract from the overall experience, but at the same time, I also know that these imperfections can put off some gamers.

As well as an extensive campaign, each of the maps can also be played with a number of other objective-based game modes, such as king of the hill, team deathmatch, free-for-all, base capture and free roam. These all add variety to the gameplay with a host of game modes that help mix up the monotony often associated with tank warfare. As well as this, these game modes can also be taken online in a series of 4 vs 4 skirmishes, adding even further to the playability and longevity that this game can offer. 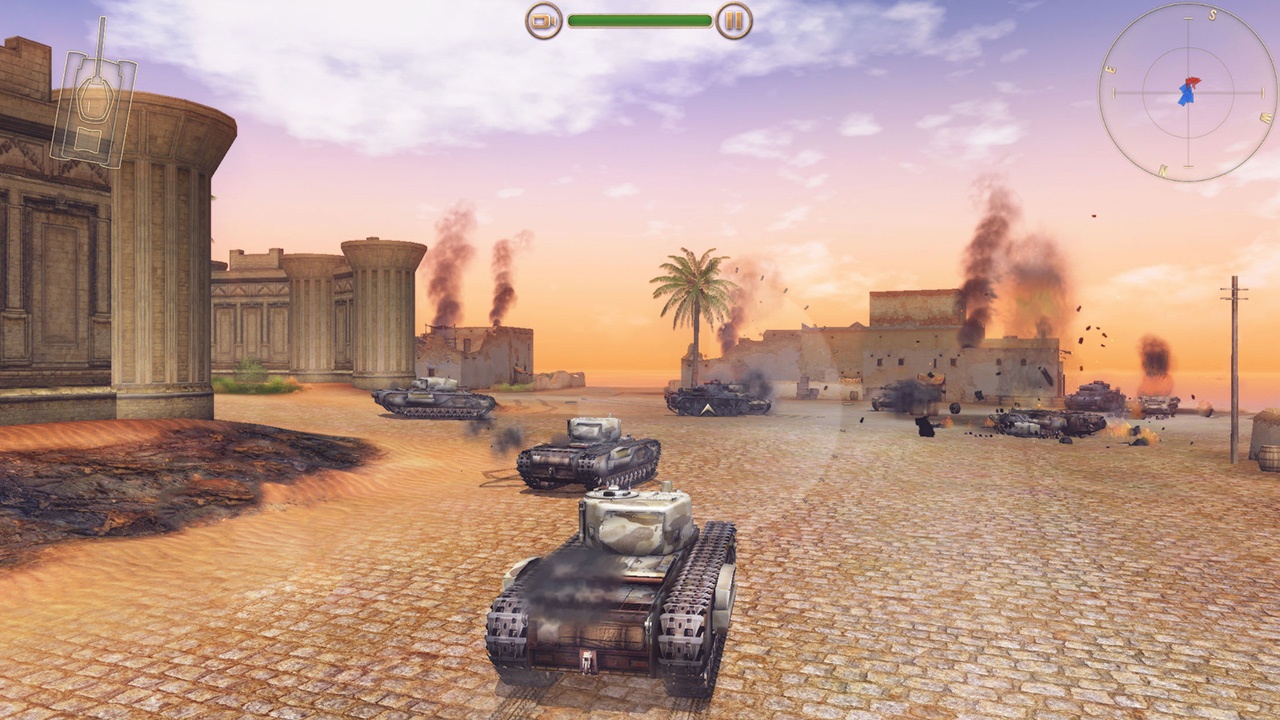 However, human opponents aside, the AI of both enemy and friendly units provide a good source of combat experience; providing suitable engagements in both attack and support roles. With a limited amount of armour before your tank is annihilated, you need to think tactically, taking the best advantage of your environments and finding the best sources of cover to succeed. This is especially important with the sluggish behaviour of your tanks manoeuvrability, something that may not appeal to other gamers, but then again, these older tank models were never the most smoothest form of vehicle to control.

A few technical hitches aside and the general pacing of the game, there is a lot of entertainment value within this title; especially if you’re a fan of warfare-style games and, in particular, tank combat. It’s range of playable and generally good modes of play, realistic visuals, upgrades and unlockables, as well as some satisfying combat mechanics, provides a nice casual game with a wealth of options and depth. Couple this with its multiplayer element and you have a game that should provide hours of fun. Unfortunately, at the time of writing this review, I was unable to find any online lobbies that were inhabited, so I can’t comment too much on how this element of gameplay will fare. However, I was able to roam around the empty battlefields, which are both suitable large and well-detailed. I can only say that this scenario has the potential for some exciting gameplay.

Overall, Battle Supremacy isn’t a bad little game. If you have an itch for tank warfare upon the Switch, or just like combat games in general, then there most definitely enough here to scratch your back. However, it’s technical hitches and some awkward control schemes will discourage players from finding out the depth of playability that this game can offer. Personally, I really enjoyed my time with this game and it will be a title that I’ll continue to play; especially if the online lobbies begin to fill. At the same time, I also know that some players will find its faults too much to handle and simply dismiss the game. However, if you can see past it’s shortfalls and take the game for what it is, then you’ll be guaranteed to have a blast. In my opinion, it’s certainly a game that’s worth shelling out for, especially with its near-pocket money pricing and wealth of gameplay options.