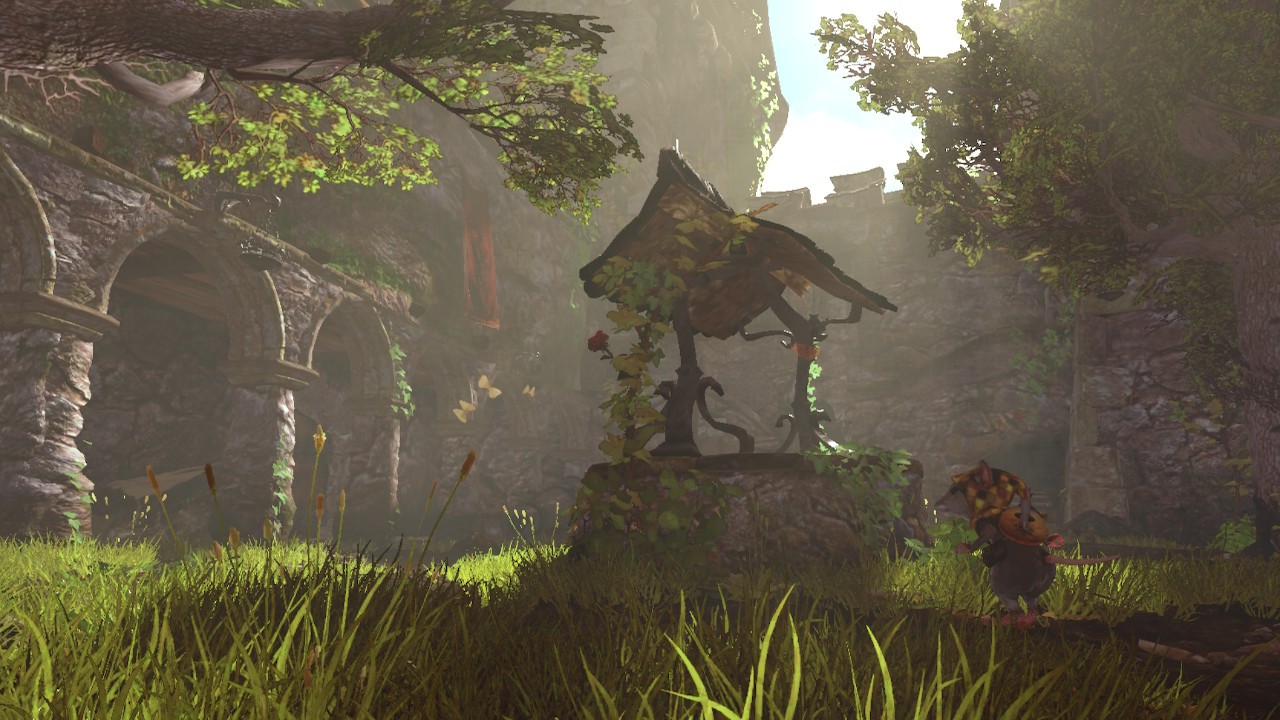 Believe it or not, I’ve been following Ghost of a Tale for years now. I became aware of this project back in 2017 when the Switch was just a new curiosity from Nintendo. Strong opening with Breath of the Wild and Splatoon 2, but only time could tell. Ghost of a Tale was in early, early access, and I had a chance to see what would become of this strange but appealing tale. I toured the first stage as Tilo, experimenting with different interactions and ideas, glitching through a couple of walls but ultimately loving the experience. Then time went on and I had to focus my attention on the Switch: it became apparent this was going to be a powerhouse for first party and indie titles, and I wanted to make sure I was creating the wave throughout that first year. I didn’t forget about Tilo, but I didn’t see what became of SeithCG until years later. Now, after an exciting revelation during the Indie World Direct, I’m finally back to finish my exploration of Dwindling Heights and the world of Ghost of a Tale.

The tale of Tilo isn’t just one of his own, but of the greater world in which he inhabits that’s touched upon in great detail, yet never fully explained. We do know that, centuries ago, the War of the Green Flame nearly destroyed the world of Ghost of a Tale, which is full of talking, walking, civilized animals. The Mice attempted to defeat the Green Flame, but were unsuccessful, and the Rats, through military might and cunning, could save the day. As a result, the Rats took on the higher levels of power, and the Mice became subjugated, with injustice and inequality seeming to divide further and further as the generations went on. In the current generation, Rats rule supreme, but the Mice have shared quiet mutterings about the unfairness of it all. Tilo is but a humble minstrel mouse, who works with his wife Merra to entertain and to live a life of modest joy. When brought before the rat Baron Osdrik, Merra refuses to perform a piece that is both humiliating and unfair, resulting in the Baron’s displeasure. This means Merra is kidnapped and Tilo is struck unconscious, to wake up in the labyrinthian island prison that is Dwindling Heights. Tilo must now escape both his jail cell and this Alcatraz-like establishment to save his family, but, in the process, may find a far greater story unfolding before him. 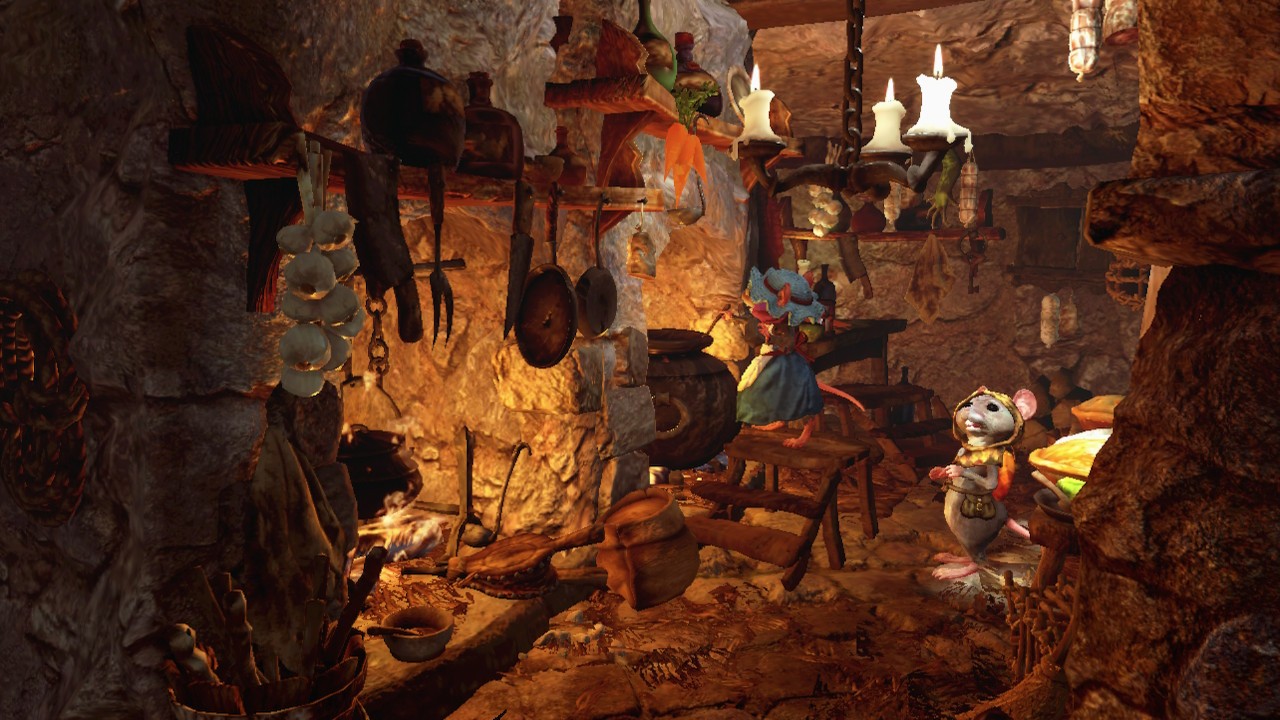 Diving into the meat and potatoes of our game, Ghost of a Tale is a stealth exploration/adventure game where you, our brave little Tilo, must explore the highs and lows of Dwindling Heights to find a successful way off the island. In the course of this exploration, you’ll encounter many NPCs with different, colourful backgrounds who will task you with different side quests that are pivotal to the main quest. The keep is fully infested with Rat guards, who out muscle and outweigh you in every definitive stat, so straightforward combat is never going to be a good option. Instead, you’ll have opportunities to cause distractions to evade them, try to sneak directly past them or, in some extreme cases, dropping things over their heads to blind them while running like hell. If Tilo is caught and defeated by the guards, he’ll respawn in the jail cell, which is going to set you back a lot. Like, a lot a lot when you get further on with the different quests and ideas that come with the game’s narrative.

The narration and story direction of Ghost of a Tale is what’s going to keep people going the most on the Nintendo Switch version of this game. I’m sure the comparison has been made before, but I got a distinctive Redwall vibe from Tilo’s adventure and it never fully dissipates throughout. Yet every strand and thread of this tale feels original and creative. There is such a massive world of work that went into crafting the backstory, the hierarchy, the current state of affairs and the balance of mysticism and medieval might that creates the undercurrent of it all. You’ll meet soothsayers, ghosts, knights with honour and disgrace in their past, and blacksmithing rats who are a bit too casual about you being a jailbreaker. There isn’t an ounce of wasted dialogue (which is all read, not voiced), as anything that doesn’t contribute directly to primary quests can be invested into the secondary quests, of which there are a TON. Plus, it makes me hopeful we might see another game set in the world of Ghost of a Tale: there just feels like there’s so much more beyond Tilo’s story, and it could easily and eagerly be constructed by SeithCG and fans alike.

Ghost of a Tale certainly looks and sounds good, but players will notice a clear downgrade in playing this title handheld versus docked. Due to the limitations of the Nintendo Switch, you never quite get to those graphical wonderments that you might see on a PC version, but you can still appreciate the incredible construction that went into the game. Dwindling Heights has a fantastic blend of dark and shadowy dungeons, lush forest vales, dusty open courtyards and lonely tower peaks, all of which afford views and displays that can make you nod your head in impressment. The details of the character models are still present in the handheld mode, but they become a bit more blurred and muddled: the fine attention to the fur and snouts of animals gets lost in the speed of it all. When the camera turns in a certain direction, you might lose some perspective and start clipping into a wall, or, in a couple terrifying moments, Tilo seems to lose his eyes entirely, just having black sockets. The tradeoff, I imagine, is that the game handles very well, which we can look more into for a moment. Basically, if players never looked at the PS4 version, they would never know what they were missing visually: it’s a step down, but it’s not a leap off a cliff. 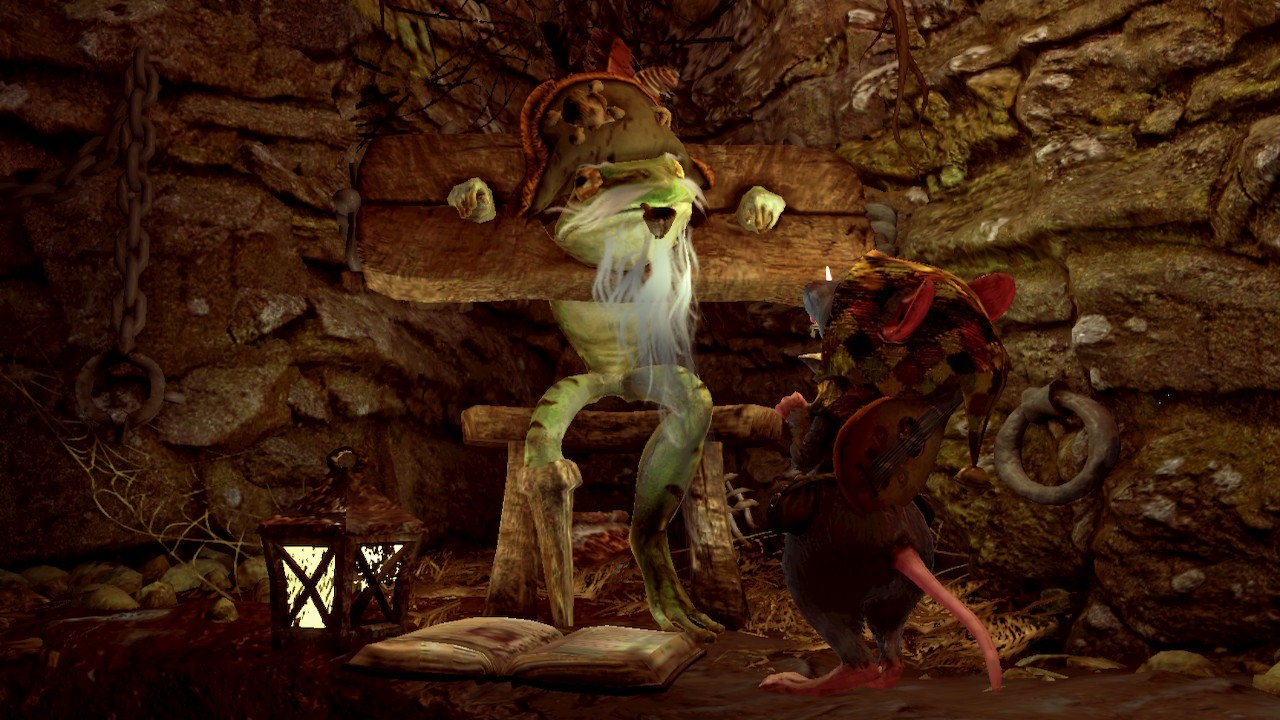 The soundscape of Ghost of a Tale is so incredibly important. Without having the musical cues, you might not know that you were in danger or that you had finally found safety. A lot of this game is running and hiding: Tilo knows better than to try to tangle with rats one on one, but rats appear to be very dim-witted as to how mice disappear. You can hide in a cupboard, in a treasure chest, and buckets where your head is VERY visible, but, as long as you don’t dive into these places in front of the rats, they’ll never know you were there. So having the violins of danger, let you know that a guard is on your tail, or the gentle horns of confusion, let you know they’ve called off the search is crucial. Sure, you could just look at the floating red marks that turn into question marks when you’re clear, but where’s the fun in that?

Due to the nature of it all, Ghost of a Tale is one of those games that you can either spend very little time on or a massive amount. There are, as mentioned before, so many side quests that they literally double the main quests list. You have some idea of where to go with each missive, but a lot of it is exploring and figuring things out for yourself. You have to see what is the safest path to get to one angle or another. You have to see if the armour you have is enough to fool rats and grant you access to deeper areas or if you need to find another way in. Manual control of the camera is imperative, and you might get a little sick from whipping around, so treat yourself well and don’t be in a hurry if you don’t know where you’re going. Explore the room and enjoy yourself.

When all is said and done, Ghost of a Tale balances on a knife’s edge for the Switch port recommendation. On the one hand, having this title available on the go is phenomenal, and I was excited to see how much more had been added to the game, right up to the exciting climax that reveals so much about the rat’s deception and the potential for future ideas. I didn’t mind doing long form, fetch quests because they’re almost all side quests, but it can get exhausting at times: thankfully, I liked being in the world. At the same time, this did look better on my PC over three years ago, and I have often cited my video card as being both old and trash. It’s hard because graphics shouldn’t be the crux of it all, but knowing it looks better elsewhere is a bitter pill to swallow, particularly because the better look is SO nice. What I’ll say is this: if you’re enchanted by the concept, you should 100% get it for the Switch. It still handles excellently, the bugs are very few, and the clipping wasn’t a problem with actual gameplay. If you think the screenshots from the press kit are where it’s at, you should probably get it for the PC so you can try to upscale to 4K as you like. But if you just want to see justice for Merra and get Tilo to freedom, the Nintendo Switch continues to be a bastion for great indie titles to take flight, and there’s no better place to come for a truly remarkable Tale.

Ghost of a Tale Review

An enchanting and exciting adventure that manages to overshadow the graphical missteps with excellent storytelling and a remarkable approach to stealth.