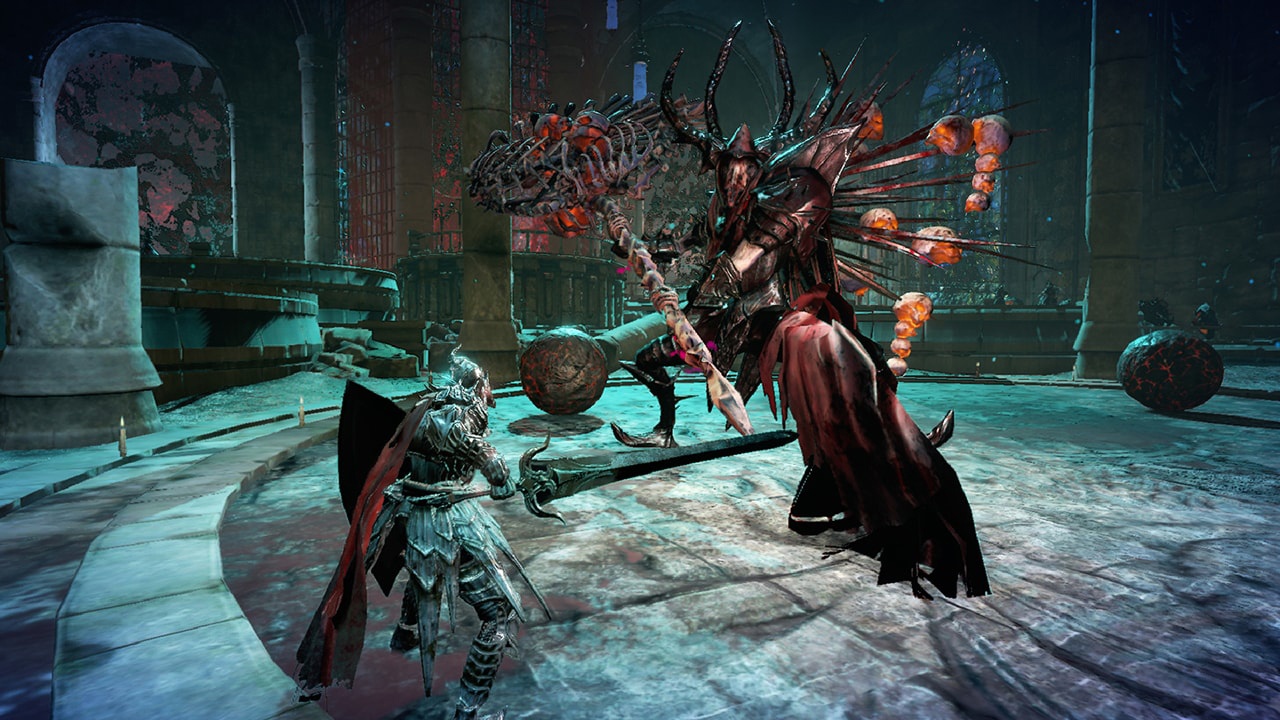 When it comes to the different play-styles of video games, they often all fall into the trap of being defined by a certain genre. No matter what elements or mechanics each game possesses, their singularity of definement often results in a game that plays inherently the same within their core values. For instance, an FPS will always be an FPS, a platformer will always be a platformer and so on and so forth. However, in some instances, a game tries to break from the shackles of its genre and bring a new style to its level of play; often bringing new or unexpected elements to its gameplay in order to mix things up or bring something fresh to distinguish it from the staleness of genre boundaries. It’s exactly this premise that has been taken on by PQube and Ares Games’ latest title, Hell Warders on the Nintendo Switch.

Defined by its genre, this title is primarily a tower-defence game, but not in a way that you would expect. Instead of utilising a variety of buildings, you call upon the skills of soldier, archers and pikemen. However, to add an element of depth to the proceedings, the game also incorporates a role-playing mechanic, as well as an action-adventure element to bring a new way of playing within its defined genre. You play as the Hell Warders, an ancient order that is tasked with holding back the invading armies of hell. Throughout a series of locales, you must position your armies of archers, mages or even catapults, in order to repel a variety of waves that can come from a number of directions.

Once your defences are set up, then the invasion begins. However, what sets this title apart from the norm, is the ability to take control of your singular character and run back and forth in helping your defences to repel the demons that spawn from hell. Its set up brings a more urgent feel to the game, as well as promote a more immersive element to the game as you find yourself thick within the action, rather than watching from afar as with the majority of tower-defence games. The game offers a choice of three controllable heroes; each one possessing their own unique set of skills and abilities that offers a form of replayability. 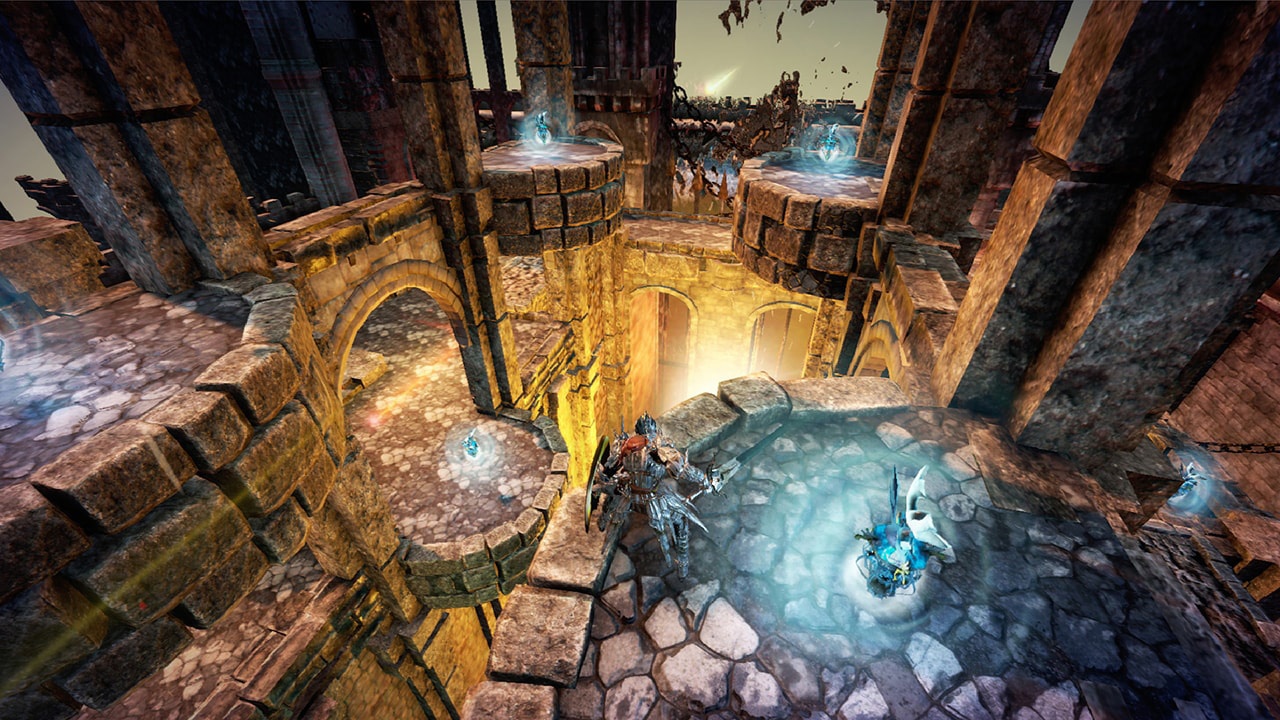 As you begin to slain the demons of hell, you are rewarded with a series of beacons that can then be used to upgrade your skills or unlock powerful artefacts to further bolster your defences. As well as this, you can also upgrade your static soldiers in terms of fire power, strength and health. This soon becomes an important element in the gameplay, as progression leads to more ferocious demons; even to the point where you are tasked to battle boss-like behemoths that tower over your tower defences. The amalgamation of action-adventure with tower defence works really well within this game, producing a different style of game that genuinely excites with its dual-styles of gameplay.

Although the game entertains in its solo capacity, the real beauty of this title lies in its multiplayer capability. Utilising both local and online multiplayer, you can team up with other Hell Warders, each one possessing their own persona of skills and capabilities, as you all work co-operatively in the defence of the invading demons, as well as assist each other in the procurement of beacons. It adds a nice touch to the replay values of the game which significantly ramps the fun that can be had with this title. In fact, there are so many elements to this game, that it constantly presents surprises around every corner, as well as an investment in the upgrading of your own characters and the defensive soldiers that stand beside you. 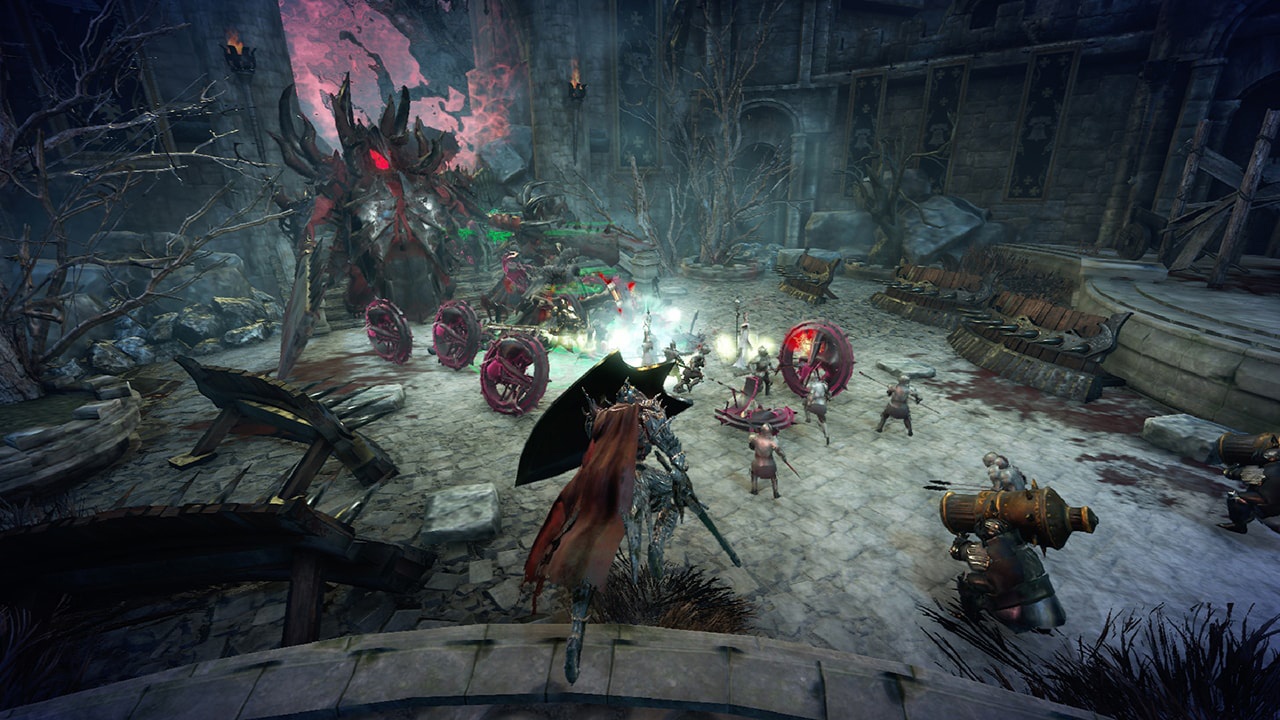 This is all further enhanced by some clever level designs and thematic maps that incorporate environmental hazards and dynamic encounters. From shifting lava to giant spinning fans, there are a number of elements to constantly challenge you and force to you rethink current strategies. Despite containing a level of complexity in all of its combined elements, there is nothing here that is inherently confusing or difficult to pull-off. In fact, the game is extremely accessible, allowing you to focus on the important elements of the job in hand; namely being the defensive wall between yourself and the waves of demonic hordes. Although the action is purely on-the-fly, bringing the action-adventure element of the gameplay, the tower-strategies pause between each level; allowing you plenty of time to upgrade defensive soldiers and prepare yourself for the next waves.

Graphically, the game does a good job of representing the hellish locales and fortresses that you’ll battle within. Some of the demonic beings are especially foreboding in their sizes and scales and present a good challenge in bringing them back down to size. However, if there’s one minor gripe with the gameplay, then it has to be within the movements of the central character that you control. Combat in general feels fine, but traversing through each of the levels has a particularly floaty feel to it, with animations that don’t really match the movements. Saying that though, this is only a minor discrepancy with the game and constitutes nothing that is particularly game-breaking.

Overall, Hell Warders offers a refreshing take on the tower-defence genre with its inclusion of action-adventuring and role-playing to produce a rather neat little package. I have to confess that this is a game that took me entirely by surprise with its level of playability and would imagine that it would you too. As a single-player experience, this is a game that offers hours of entertainment but with the inclusion of a multiplayer element, both local and online, this is easily a game that will keep you going over the long-term; making it a title that offers superb value for money. It’s presentation values are quite high and suit the feel of the game and its combination of gameplay elements produce a game that sits very nicely indeed on the flexibility of the Nintendo Switch. For someone that isn’t really a fan of tower-defence games, this is a title that contains more than what the genre defines, producing a title that is a worthy addition to anyone’s Switch library.

Hell Warders offers a refreshing take on the tower-defence genre with its inclusion of action-adventuring and role-playing to produce a rather neat little package.