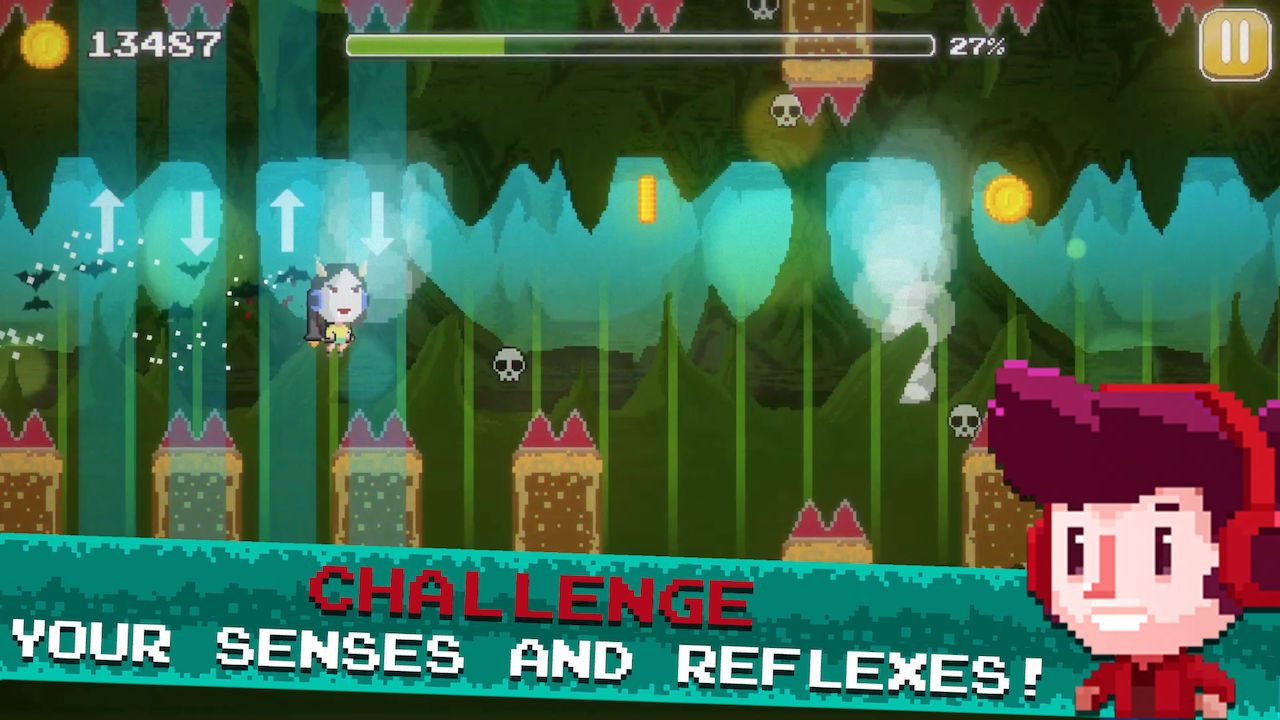 Elitism in gaming is something that really degrades the enjoyment for everyone across the board. For people who can “make the cut” and stand out in incredibly difficult or technical games, it sometimes manifests personality traits that can, at best, be abrasive and annoying. For people who aren’t skilled enough to perform complex movements, ideas or techniques, they may simply be indifferent, but there are those who turn the failure into scorn, bitterness and anger. No one should be humiliated for the games they play, regardless of how good or bad they do, unless they are purposely trying to crow about it and then eat said crow. So I am unashamed, and rightfully so, to say that Beat Rush is terrifically, terribly hard to get into. If you love it more power to you. Unfortunately, for this Switch port, I’m not sure if there’s enough there to keep new players engaged or old players coming back.

Beat Rush is a one button rhythm runner, in which you need to navigate along perilous courses that have traps, walls and spikes you dodge in time with the music. Additionally, coins – the absolute lifeblood of this game – appear throughout the course, and grabbing them gives you a better overall rating at the end, as well as provide needed funding for…everything. As you run, you’ll encounter white flags, called checkpoints, and this is where you have the option to restart from if you run into a little snag while trying to complete the course. Of course, starting from the beginning is free: restarting from the checkpoints costs coins, a price that increases incrementally each time you restart and each time you progress to a further and further checkpoint. Coins are also used to unlock new characters to run as, but you have the option of unlocking most of those simply by beating some of the levels.

When I first loaded up Beat Rush, I was excited: the logo gave me a pretty good idea of a pixel art style game (which is true) and some kind of musical runner (technically true). But then, before I even got into the game, I had unlocked a reward: it was my first day “checking in” to the game. It was a progressive rewards system, and I had received 500 coins for my first day of coming to play. Each day that I played (checked in), I would get an even bigger reward until I finished the combo and got a grand prize. It was weird: why would a game reward me for opening it? That’s what you do, you open games, and you want to open them, unless, for some reason, they’re cluttering your…phone…and you…forget…about them… 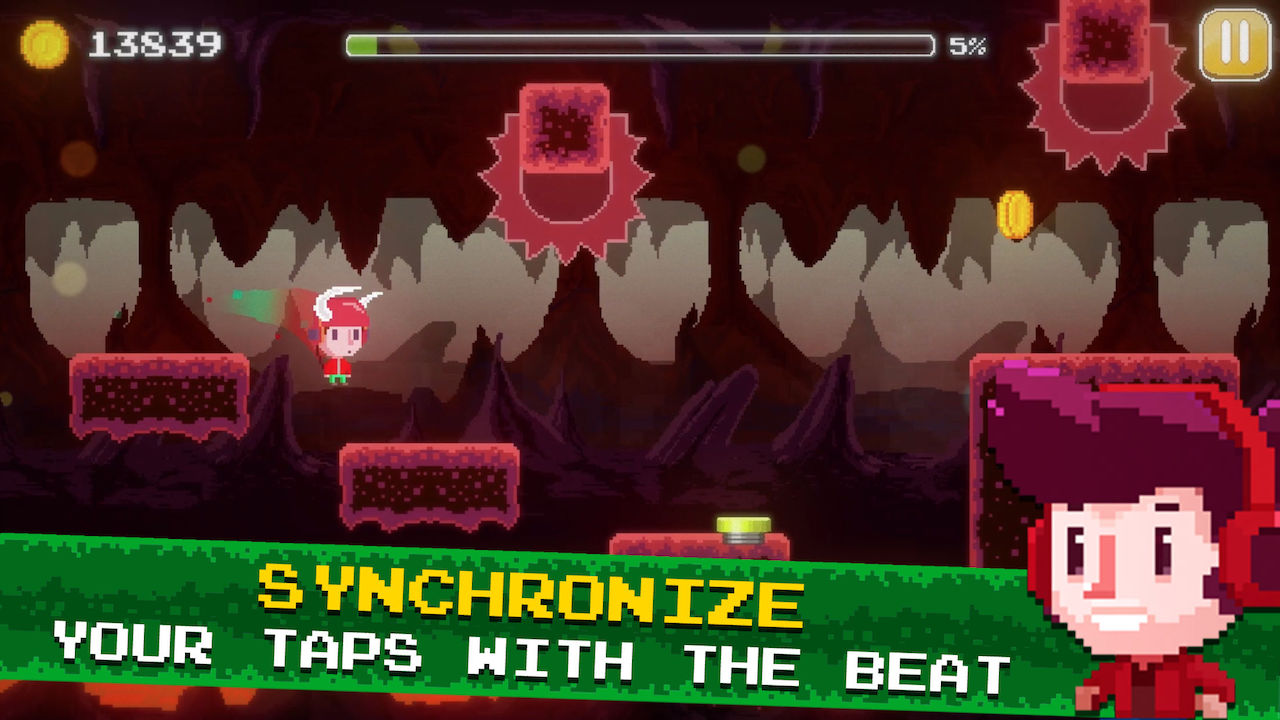 Beat Rush is a straight up mobile port of a free Android game, and things start to split at the seams immediately. For one, there’s only five levels: five. You need to beat five levels, in total, to have played this entire game. I know there’s always the argument of quality over quantity, but for Heaven’s sake, five songs and you published it on the Switch?? That means that these are either some of the best damn beats that I’ve ever heard or you’ve got absolute brass balls to consider that this is going to sell well on the Switch. For the record: five dollars. This game costs five dollars, which means the developer considers each song to be worth approximately a dollar.

Unfortunately, I’m not a huge fan of dubstep: I’m much more of a classic house and eurobeat kind of person, having grown up on Dance Dance Revolution and, to a lesser extent, Pump It Up (which got me into all kinds of other Asian music). Dubstep just seems to have almost a trope to it, where you’ll have a very heavy-handed beat or a very gentle beat that suddenly gets torn apart halfway through by triplet laser sounds and someone deciding to do a light show in your mind. Far from being engaging or interesting, I find it incredibly irritating, because I usually like the beat right up until it goes off the rails. Beat Rush is ALL dubstep, and it never gets any better, worse or otherwise. There’s no vocals, no piano, no real variety in the music: just dubbing all the way through.

Alright, so the music isn’t my thing, and the game presents like a needy significant other/pet. It’s up to the gameplay to salvage things, and, wouldn’t you know it, I sank like the Titanic. Part of my failure within the game was a misunderstanding about the gameplay itself: I thought hitting the button on the beat was important, and it appears that the offbeat is just as important for jumping in time. Fair enough, I know that’s a challenge with dubstep, but at least I understand that eventually. Then there was the matter of the sticky jump button. If you held down the jump button too long, you immediately jump again as soon as you touch ground, which usually meant springing up into spikes, walls, or general death, and losing everything. Also, you don’t have to jump when you get to the springboards. Ok, live and learn, I’m getting it now. Finally, through some trial and error, I made it through the first song, got one star, shrugged and chalked it up to experience. Then I made it to the second song. 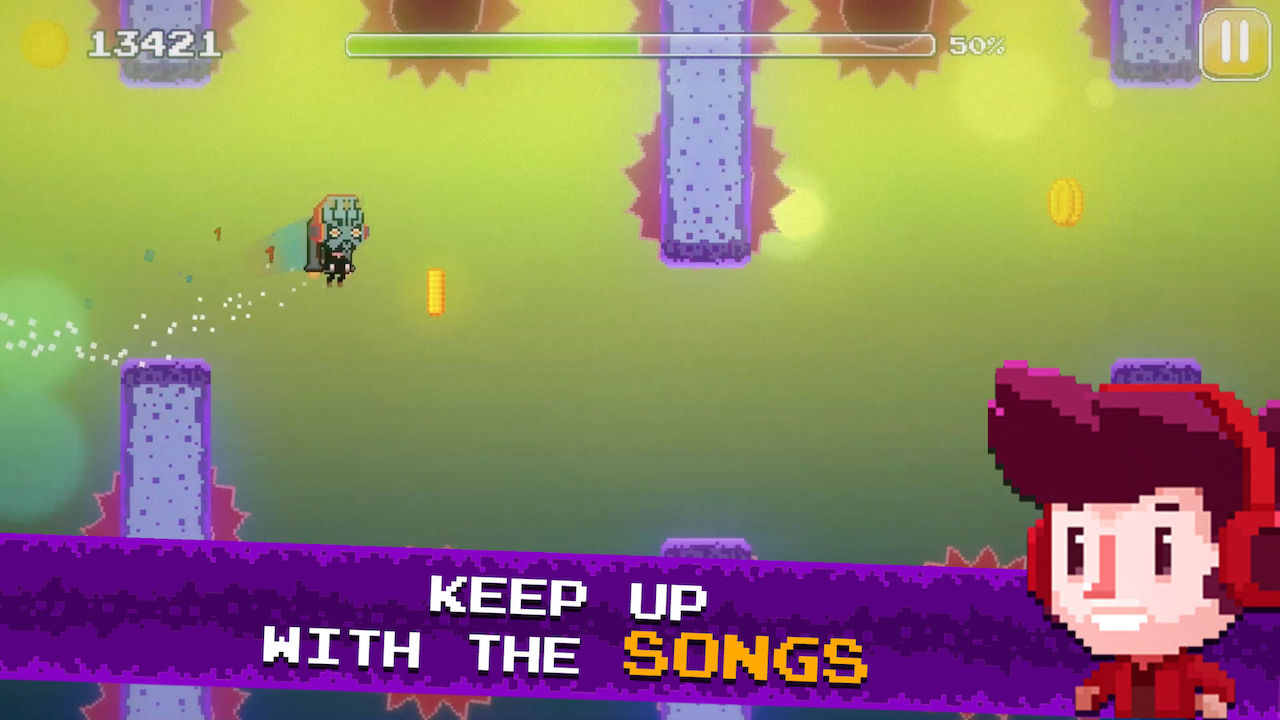 If anyone’s played Jetpack Joyride or literally any other game including a jetpack, you understand there is no rhythm or rhyme with a frigging jetpack. Jetpacks are tenuous, fickle bastards who will shoot too high with a split second of extra gas or slam you into the floor if you don’t time your afterburners just right. Yea, you know what I’m talking about. So do you think that a jetpack makes a lick of goddamn sense in a game where I’m trying to keep time with the music? No, it really doesn’t. It breaks up your game entirely, because now you’ve shifted from “move and groove as best you can!” to “SHIT LAVA SPIKES WALLS AHHHHHH!” and then back into the gameplay. It’s so jarring that I thought this was one of those metagames where it turns out the Beat Rush is just a simulation and I’m going to escape to go play something else, but no. Run in time to the music, flail around on a fuel-powered backpack, then go back into the rhythm. And, good news: the jetpack is in every level after the first. All of them. All four of them.

This game is nonsense. It’s woefully short, deliberately difficult for the sake of being difficult, and it hides behind a musical moniker like that excuses away bad decisions and behavior. Beat Rush feels like it rushed up and played the knockout game with me for 382 views on YouTube and to be exhibit A in my assault trial. The coins mean nothing, the game promises “more songs soon,” but why the hell would I want extra beatings? If you just adore dubstep and can’t get enough failure in your life, then, by all means, grab Beat Rush: I’m taking my five bucks and investing it in a McDonald’s Value Meal. At least then, when I have crippling pain later, I know precisely why.