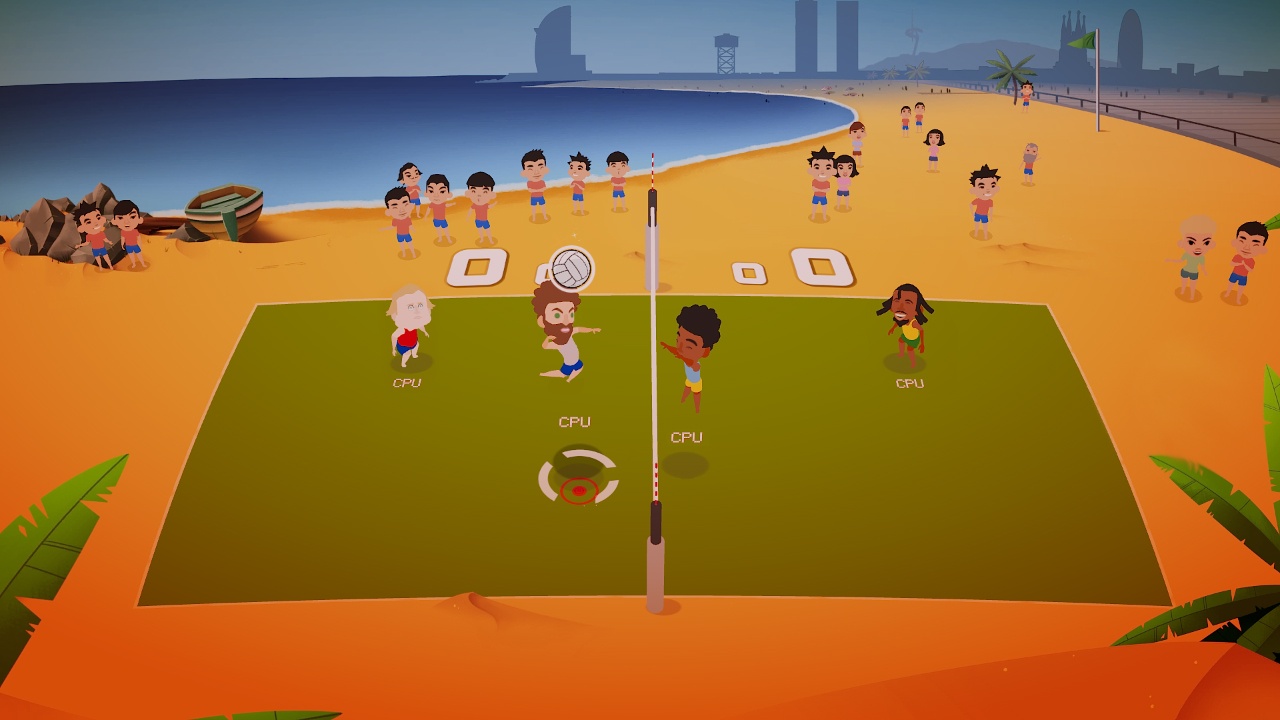 Not every sports game is eagerly trying to nail that coveted “top” spot when it comes to sporting titles. Sure, the grab for Madden and NBA2X each year is essential, because there’s nothing like dropping sixty dollars for a game that could become obsolete in as few as six months. But little games focusing on the core of the sport and not the leagues around it are often quite fun. NBA Playgrounds had the right idea, just not the greatest execution. Mario has taken sports of all kinds and turned them into fiercely competitive but sometimes goofy ordeals that deeply appeal to players of all seriousness. And, sometimes, you just want a barebones game that harkens back to the days of simpler graphics, ideas and execution. Super Volley Blast, brought to us by Unfinished Pixel, is one of those sweet, simpler games that has a good home on the Switch.

As you might infer from the title, Super Volley Blast is a rambunctious but ultimately even-handed volleyball game with a few bells but no whistles. There are several different ways to jump into play, from a quick match to a “story” mode that allows you to play out a circuit of sorts. Keep in mind, the story mode seems to be the same regardless of which characters you choose: you and another character dream of great volleyball futures, your coach believes in you, and now it’s time to travel the globe, challenging other pairs and working your way to the top of the volleyball charts. It’s not exactly Shakespeare, but, as a framing device for a volleyball game, it works out well. You really can’t play singles, so the best you can hope for is to throw on a CPU controlled second who does a modest job and then hoping they don’t cramp your style too much. Classic volley rules: first to eleven wins without having someone else on the cusp of victory as well. Basically, if you’ve played volleyball before, you understand this game. 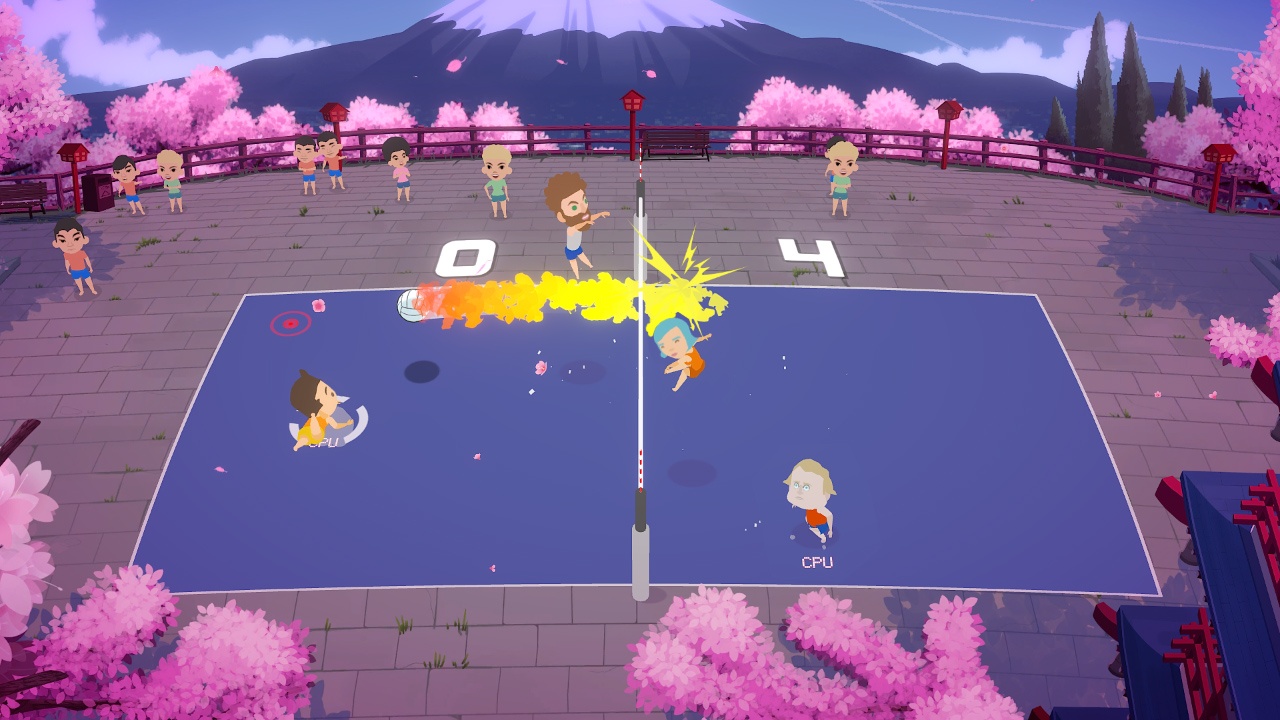 For what it’s worth, Super Volley Blast does a bit to add some pizzazz and energy to the game, and not just in the title. For one, the moves and buttons are properly varied to add a bit of excitement in each match. Three buttons designate different ways to strike the ball, either in a hammer fisted pound, a lighter bounce setup or a simple slap to get things moving. If you’re running while you hit the button, you have a chance to dive and really make for dramatic saves, which become somewhat necessary when you accidentally whack the ball out-of-bounds. You also have a jump button, helpful for setting up wicked spikes and equally wicked blocks. This isn’t a slow-paced, NES era volleyball game: in spite of simpler graphics, this game delivers some proper speed and propulsion to the entirety of a game.

Super Volley Blast also seems to be a stickler for the rules, something I wasn’t anticipating going into this title. I think the last time I seriously played a volleyball game was about four generations back, and the focus on proper etiquette wasn’t that important: not so for Unfinished Pixel. Trying to airstrike a serve is an automatic error. If you attempt a spike block too soon and too close to the net, it counts as overreaching and you’ll get penalized for that. If you flub a third hit and your partner attempts to recover with a fourth, whistle, loss, shame. This game might actually be a fantastic framing device for people getting ready for the summer who know very little about the sport of volleyball outside of half heartedly paying attention to the “game” when there were Olympic broadcasts going on. And no, that slow motion scene in Top Gun doesn’t count either. There’s nothing more embarrassing than losing a bunch of points because you thought you knew the rules and you clearly don’t, and Super Volley Blast could be a great solution therein.

As a group game, Super Volley Blast also does a bang up job of providing a decent number of sprite variety to the players you and your friends can choose from, and the controls are tight, responsive and sufficiently sticky. When I got my kids and wife together for a game, we had a pretty good time doing a couple quick matches to see how well we could figure it out. While I don’t think the graphics are particularly great (a bit dated while trying to put on some modern glitz), they’re exciting enough to at least compete with higher level mobile game graphics. My daughters both wanted to be Amy, so I think that’s a positive slot in terms of attractiveness for the design. Additionally, the character creator does have a good amount of customization, so you can make characters that almost but not quite look like you. Once you get down the controls, even younger kids can have a pretty good time following the red target that indicates where the ball will go and then mashing buttons like crazy to try to outwit your parents. Oh, dear little ones: I will always play to win. 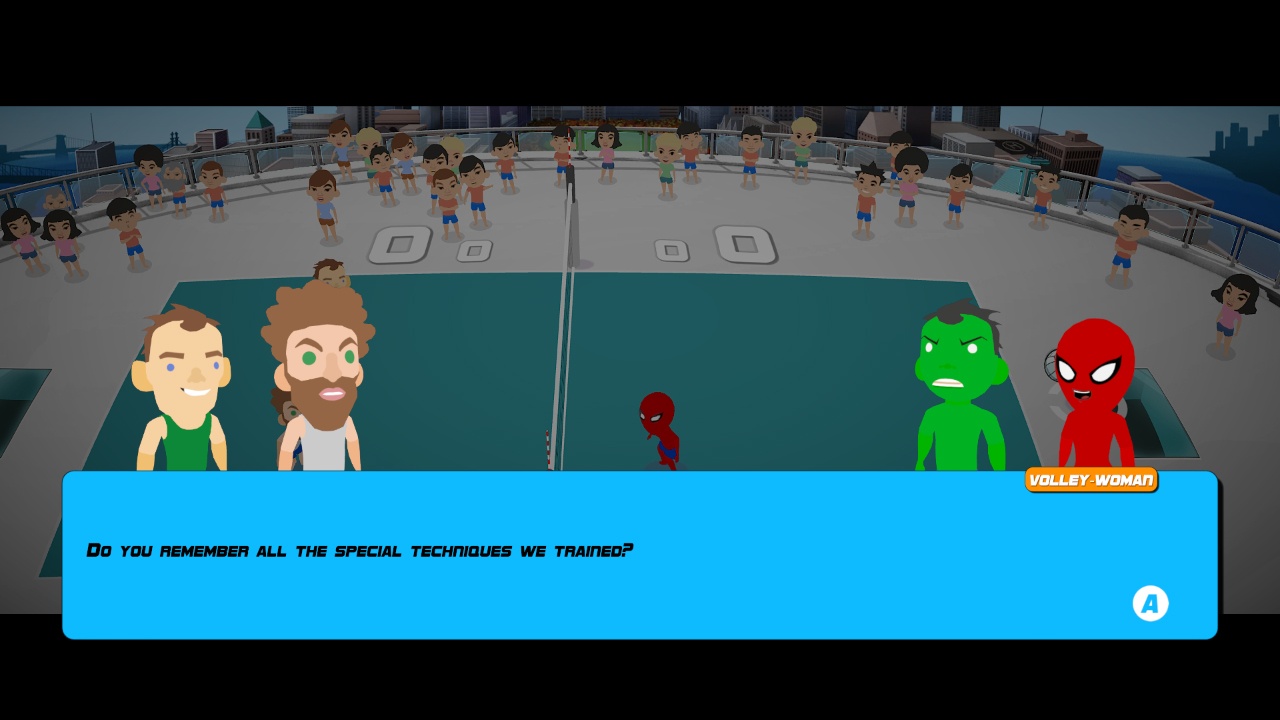 For a solo game, Super Volley Blast is decent BUT the AI is a bit unhinged at times. Firstly, the CPU levels increase sharply after the first day of Story Mode, leaving you to scramble a bit in terms of reflexes and techniques. You initially can power through by just spiking the damn ball over and over till you get to eleven, but the other team wises up fast. Then you’re forced to figure out actual strategy, and this is where your robotic partner can screw things up. See, they are inherently designed to make sure they provide the best support whenever possible, including refusing to hit it over the net if they get to the ball before you. They’ll always try to set you up, much to my chagrin, because sometimes they simply had a better shot right out the gate. Also, they have no patience for your showboating: they treat half the court like their own, and it doesn’t matter if you get to the spot first, if it’s in their area, then they’re gonna hit the ball. The resulting confusion can lead to dropped shots all over the place. Basically, you gotta learn to play nice, otherwise you can’t play at all.

Having said that, there’s really nothing worth complaining about or ruminating over when it comes to Super Volley Blast. It’s pleasant, it’s fun, it gets the job done and it does so without wasting a lot of time or energy on hard disk space, poor performance or nonsensical superpowers. With a decent number of locations to play at, rules to customize and tournaments to create, this is a great little title that delivers exactly what it promises, and does so with aplomb and class. If you like volleyball, then you’re gonna have a Blast.