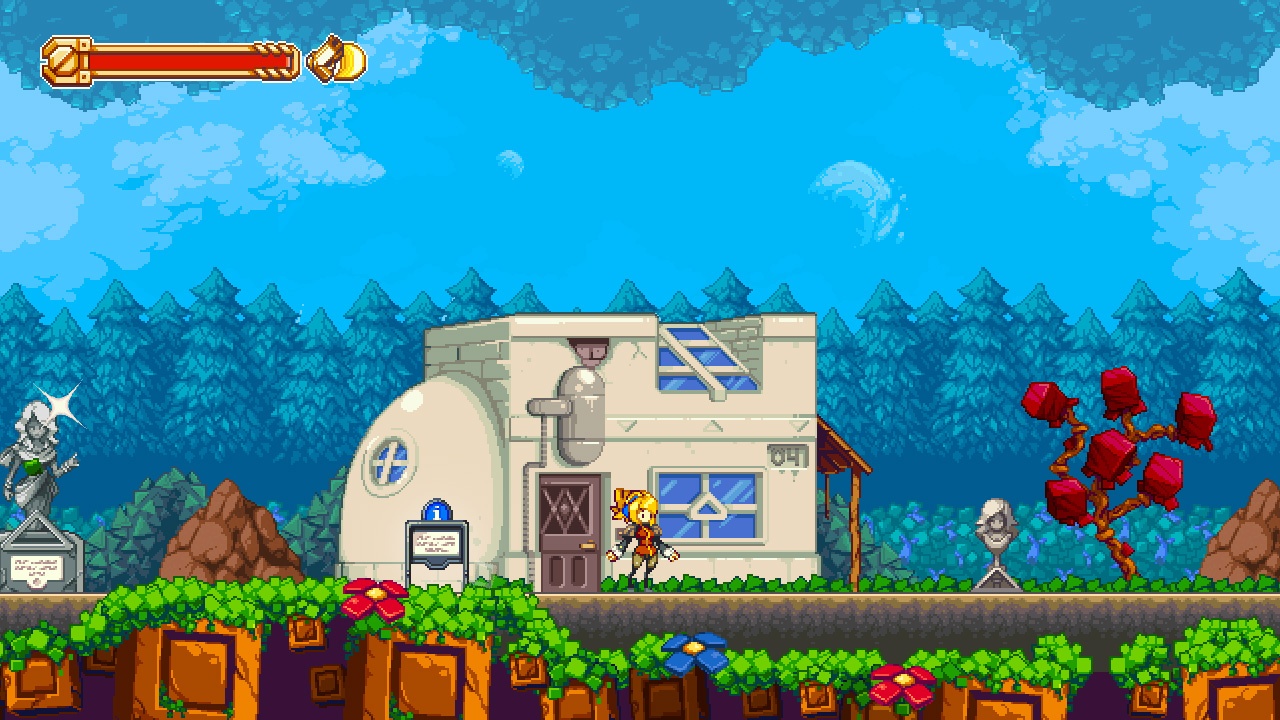 There is nothing that is more powerful, more dangerous and more pivotal to humanity than a belief. Great advancements in civilization and technology have come about because of a singular thought or a shared idea, and pieces of history have been lost, destroyed or suppressed in the same vein. As a species, we are loathed to dismiss what we inherently think is true or righteous, and many of us are incredibly resilient in changing or altering our mental foundations around certain topics. It sets us apart from animals, it drives us to great heights, it inspires incredible cruelty, and it all comes in the package of “knowing” what is the truth, and what is better or even best for others in our minds. But when two factions have an absolute ideology on who is right – and, more importantly, who is wrong – things quickly and horribly escalate.

Iconoclasts is the tale of Robin, a young girl who is the daughter of a Mechanic, a profession that has become outlawed and shunned in her world. To repair things and create order from chaos without the blessing of Him or Mother – two diety-like beings that compel a fanatical and crushing theocracy called One Concern – is a sin, and sin will be cleansed with Penance, the violent arm of One Concern. Now an orphan, Robin insists on picking up her father’s wrench, because she wants to help the people and make them happy, and most are too poor or besotted to acquire Ivory, the mysterious energy source that is carefully partitioned out by One Concern. Robin quickly becomes a target of the powers that be, and also attracts interests from a rogue group, dubbed Pirates, who believe in re-communing people with nature and coming together as a society. Robin sincerely just wants to do right, but, when there are stipulations everywhere for what is right and how she “should” use her abilities, how can you ultimately figure out what’s the correct path? Oh, and the moon is crumbling and smashing into the planet piece by piece. It really seems like this is one of those cosmic things where we put aside our separate religions and come together to save everyone, but that’s the great part about people: we insist that our beliefs are what’ll save us, and not, say, working with those we may be at odds with.

Iconoclasts touts itself as a metrovania adventure, and that is, for the most part, accurate. Robin will certainly have cause and purpose to revisit areas and locations, but I don’t think Iconoclasts is nearly “open” enough to really be in the same vein as some other titles. Instead, I would say that Iconoclasts is a distinct puzzle platformer with metrovania elements, and I’m not saying that in a dismissive way. Robin will work extremely hard to figure out how to accomplish and figure out different items, targets and enemies interact with each other in order to move forward with the game. Quite often, at the core of things, Robin will need to rely on her wrench to be the final solution to most problems. Besides being a massive weapon, the wrench is needed to activate bolts, hook onto nut platforms, torque electrical grids and any number of other interactive points. Sometimes the wrench is needed to smack an enemy into submission as well, but Robin has a fair number of offensive tools at her disposal, from her initial stun gun to an incredibly powerful wave-like gun she obtains later, and can even (and often must) pound on the heads of foes like a certain iconic plumber. Once you accomplish and finish an area, there are usually clear indications of where to go next, but feel free to backtrack and explore as much as you can: there’s a fair number of goodies strewn about, and new abilities you unlock will send up a call from places long gone by that you’ll want to find your way back to (when you can). 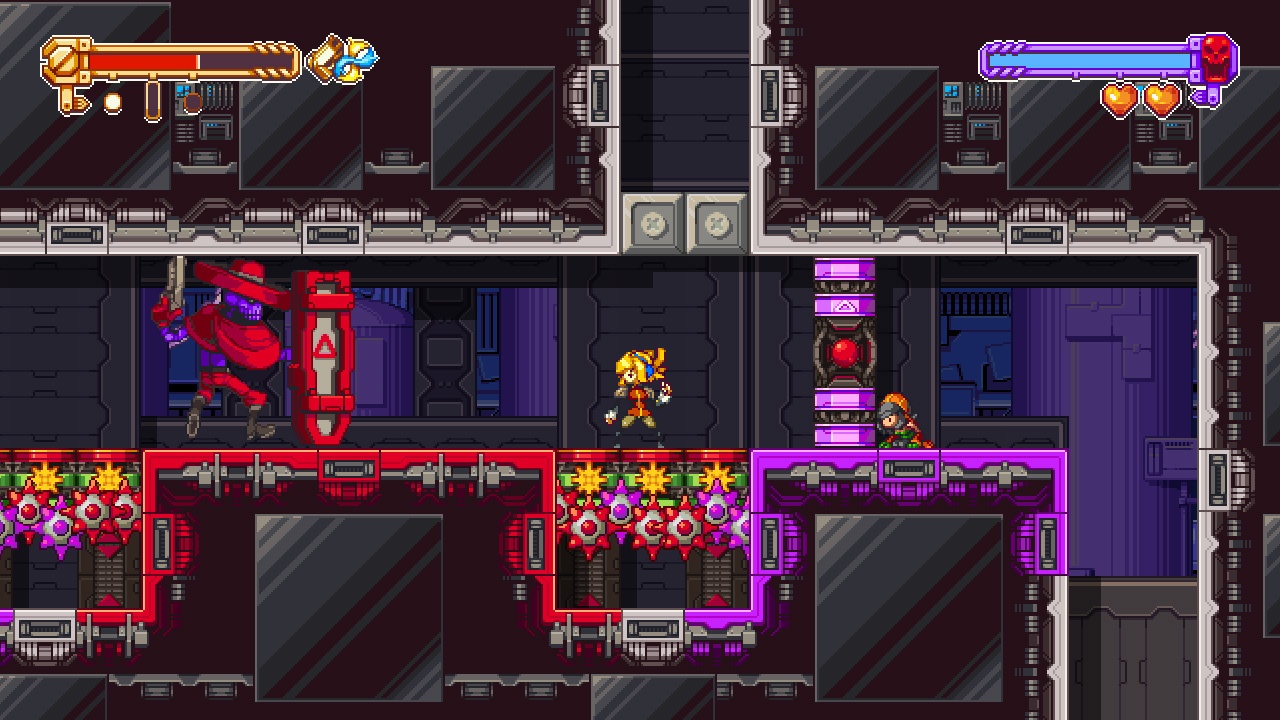 Before anything else in the article, I have to sing Iconoclasts technical accomplishments on the Nintendo Switch. As someone who cannot afford to keep multiple memory cards just juggling around, it can be difficult to appreciate a game when I see it consuming my free space. Joakim Sandberg, the solo developer, has done an outstanding job of optimizing and shrinking Iconoclasts down to an insane 165MB, making it one of the smallest indie adventure games on the Switch. It’s almost half the size of Owlboy, which was a technical marvel by itself, and it performs with zero errors or stutters. I was able to play the entire game (roughly 14 hours) without a single crash, glitch, slowdown or noticeable problem. Seeing games get this level of polish instantly makes me sit up and pay attention, and the content inside just is even more appreciated because I acknowledge the strength of the code behind it.

Iconoclasts is an utter delight, from start to finish. Firstly, Robin is a fantastic silent protagonist, using only a few moments of forced dialogue choices to drive on the exposition and back stories from other NPCs. She is so sincere in her want to help and to save, and is driven by her father’s death and the want to make life better for her brother and the rest of the world. As a wordless character, there are a lot of chances for visual expression through body language, since the pixel graphics are a bit too loose for many facial expressions, and she conveys her thoughts and moments perfectly. The effect really keeps you on your toes: there are moments when there’s loss and grief, anger and strife, but also more than a handful of quirky and intentionally hilarious incidents, including one specifically in end game that involves a lot of bowing. The other characters have their own levels of worth and appreciation, but there wasn’t anyone that I personally liked better than Chrome, the aloof but incredibly dangerous/psychotic villain who has his own transformation and plot channel to follow. The fact that character names stick with me after the game is already a pretty telling moment, as I couldn’t name anyone besides the titular character from most titles that I’ve played recently.

Additionally, Iconoclasts is tight and smooth when it comes to controlling and playing. Robin can move effortlessly between land and sea, sky and earth, and does so in a natural, athletic way. You’ll have to run, crawl, leap, hang, and do any number of exercises to reach where you’re going, and the path always seems clear. The handy-dandy map does keep you up to date on your location, but the direction is often the way you’re meant to head, and Robin reads cues pretty well. The enemy variety will ask you to keep swapping out different tools and weapons, and every conventional gun you find has a powerup attack that is important for problem solving as well as fighting. The remote bomb gun, for example, expels rolling explosives, but charging it up creates a targeted missile to reach those hard-to-blow-up places. Even your wrench gets additional power, and there’s something so satisfying about smashing an enemy to bits with your tool of the trade that I purposely put myself into harm’s way to exact the strongest justice. What can I say, I’m a purist at heart.

And the boss battles! If there is a strongest suit to the game itself, the boss battles of Iconoclasts are some of the best in any titles that comes readily to mind. Far from the simple “be as strong as goddamn possible,” Iconoclasts asks you to do some fast thinking problem solving with each and every boss. Take, for example, one of the first, where you’re attacked by a Pirate Robot (a simple misunderstanding, surely). You have to look for visual cues from your companion at the time (another complex NPC named Royal) as to when he’s about to launch a magical volley, and you need to trick the robot into falling into the crosshairs. Getting him hit here is just the first stage of things, and you’ll have to work out additional ways to damage the robot before the fight is over. If you’re unlucky enough to fall in combat, don’t worry: the game is generous with respawn potential, allowing you to come back to life shortly before the battle, but perhaps without all your tweaks filled up. 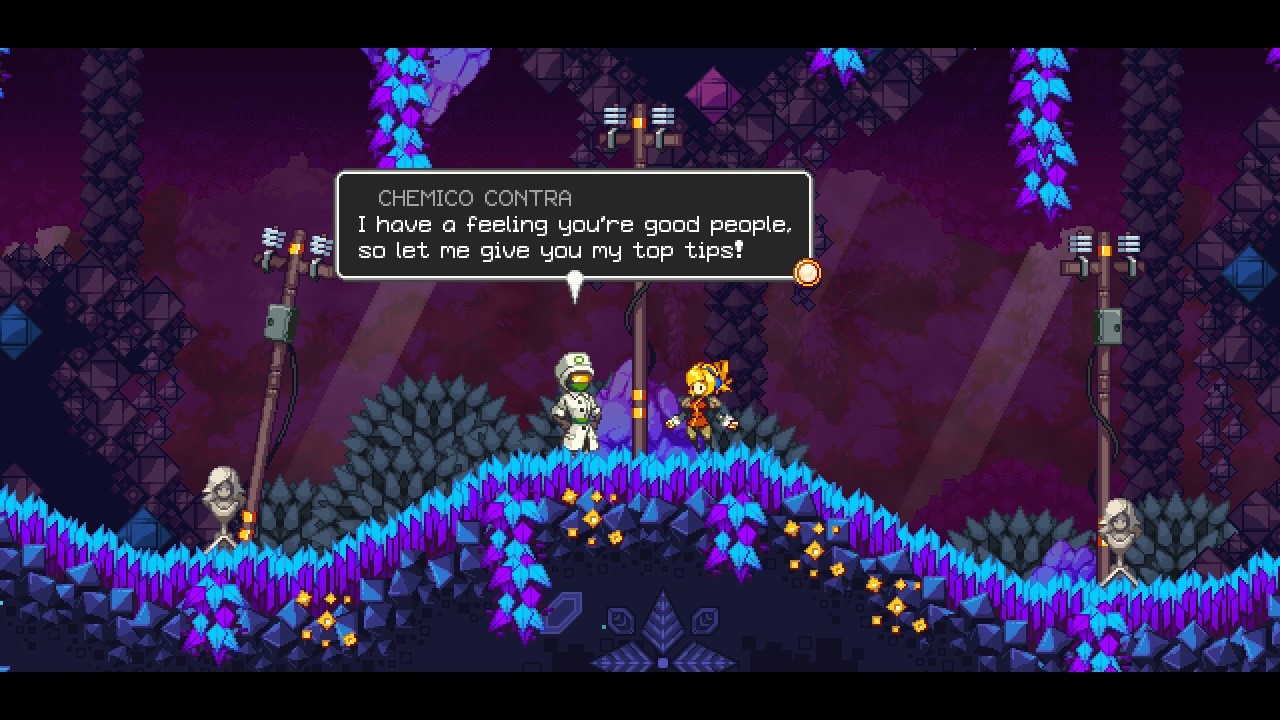 The tweaks system is probably the only thing that never really did it for me in Iconoclasts. As you explore the game, you can find different elements that, along with scattered blueprints, allow you to craft tweaks that you can equip (three at a time) to alter your character a bit. Things like running faster, holding your breath longer, spinning your wrench longer and, most importantly, taking one hit without feeling damage. The Iron Heart tweak (the one hit) seemed to be the most versatile and important, whereas the others were…novel. They had their moments, I suppose, but things like holding your breath a little longer were rarely a make-or-break situation, and often could be conquered by just being quick on your fingers (or setting the difficulty easier for a bit…shhh). It’s a good thing, don’t get me wrong, but there just wasn’t any sense of urgency to it, and players could get through the game quite comfortably even without a bunch of extra tweaks. Still, I’m also not a big crafting person, so that’s a factor.

But Iconoclasts really is an artistic masterpiece from start to finish, both in the plot and in the presentation. All spoilers aside, there are a lot of great situations and moments where characters and the player need to reflect on the world around them and what’s happening within, and where the solution really lies: strictly adhering to one group’s beliefs, or trying to find a compromise? Sometimes, simply joining them instead of beating them seems like the best solution. But all of these melancholy events are only further highlighted by the artwork and soundtrack, which are really top-notch. Iconoclasts has opted for some gorgeously svelte and expertly crafted characters and landscapes, giving awe to certain moments, like the first time you step outside and see the crumbling moon in the twilight sky. Combined with a score that is evocative and driving, Iconoclasts is wonderful and making scenes and exchanges stand out in your mind.

I’ve rambled for far too long to say far too much about this game. This is one of those titles that everyone should give a try, even once, to feel and love and enjoy themselves. Iconoclasts stands out, proudly beseeching people to hear its story and understand a bit more about what the developer and the world itself is trying to say. I couldn’t be more satisfied if the game made me dinner afterwards. I feel like I haven’t slept in a couple of days, and that’s because, for the first time in a long time, something urged me: “Just a few more minutes. Just till I get to the next save shrine.” That’s a rare game to do that to someone who’s been gaming nearly three decades. Iconoclasts does that.