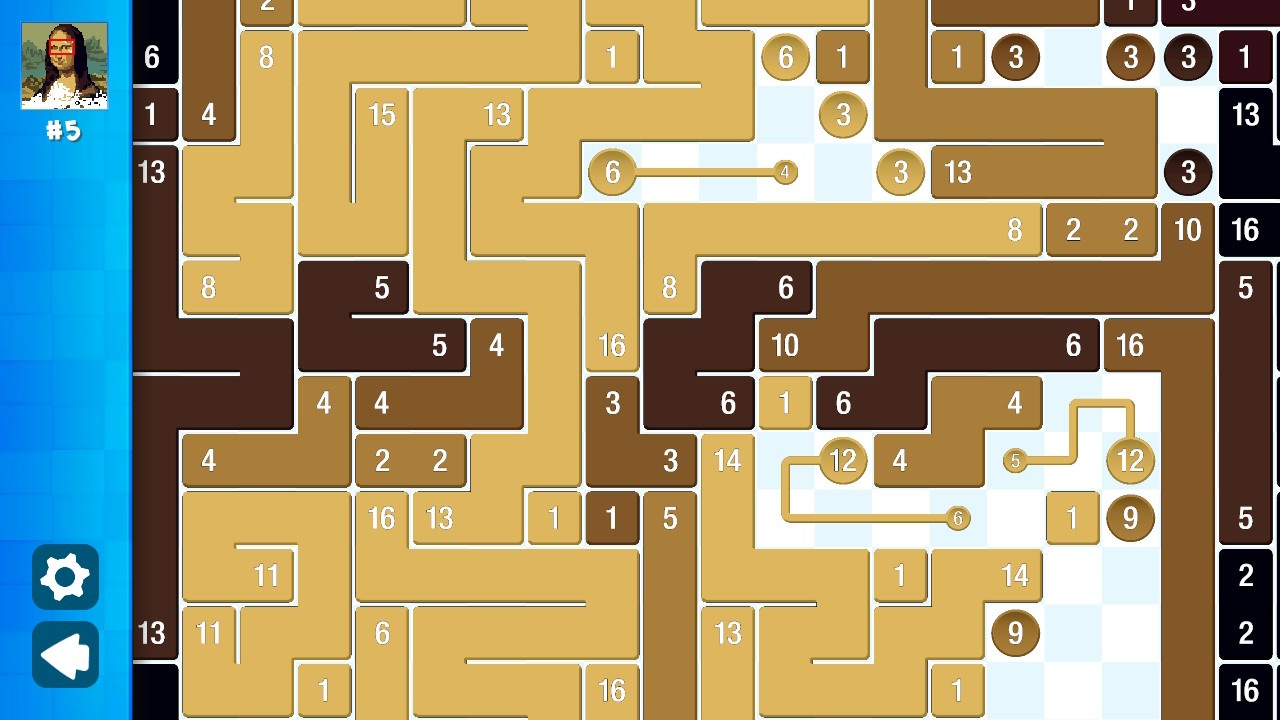 However much I enjoy a good adventure with an RPG, or a touch of action with a good old-fashioned shooter or racer, I always find myself being partial to a puzzler too from time to time. I’ve played a few in my time, from point-and-click adventures to mind-boggling platformers. However, for me, the best form of puzzling entertainment comes in the guise of pixel-art creations, with games such as Picross, as well as Score Studio’s and Rainy Frogs’ latest release on the Nintendo Switch, Piczle Lines DX 500 More Puzzles!.

If you’re not familiar with the concept of these types of puzzle games, it’s basic premise which involves matching up a pair of numbers whose numerical figures denotes the amount of squares which need to be filled in order to join the numbers together. For instance, find a set two’s sitting side-by-side, then by selecting each square fills in its values with a rectangular block, or find a couple of three’s in close proximity to each other, then drawing a line from one three to the other, can create a straight, or L-shaped line that joins the two figures. With a whole host of numbers presented on various sized grids, these conjoining of numbers, as well as the creation of solid blocks, or lines, work together to produce a complete pixel-art picture.

If you’ve played previous titles that follow along the same mechanic, especially Score’s previous release of Piczle Lines DX, then you’ll already know what to expect. It’s a simple mechanic, but is also one that has been tried-and-tested to a satisfying style of gameplay. This standalone title offers more of what can be found on their previous release, in fact, it almost plays identically, at least in its presentation and mechanics, but now contains a further five-hundred new puzzles, some of which contain a new style of logic, as well as a thirty-six paged, digital presentation of the behind-the-scenes artwork from the series. 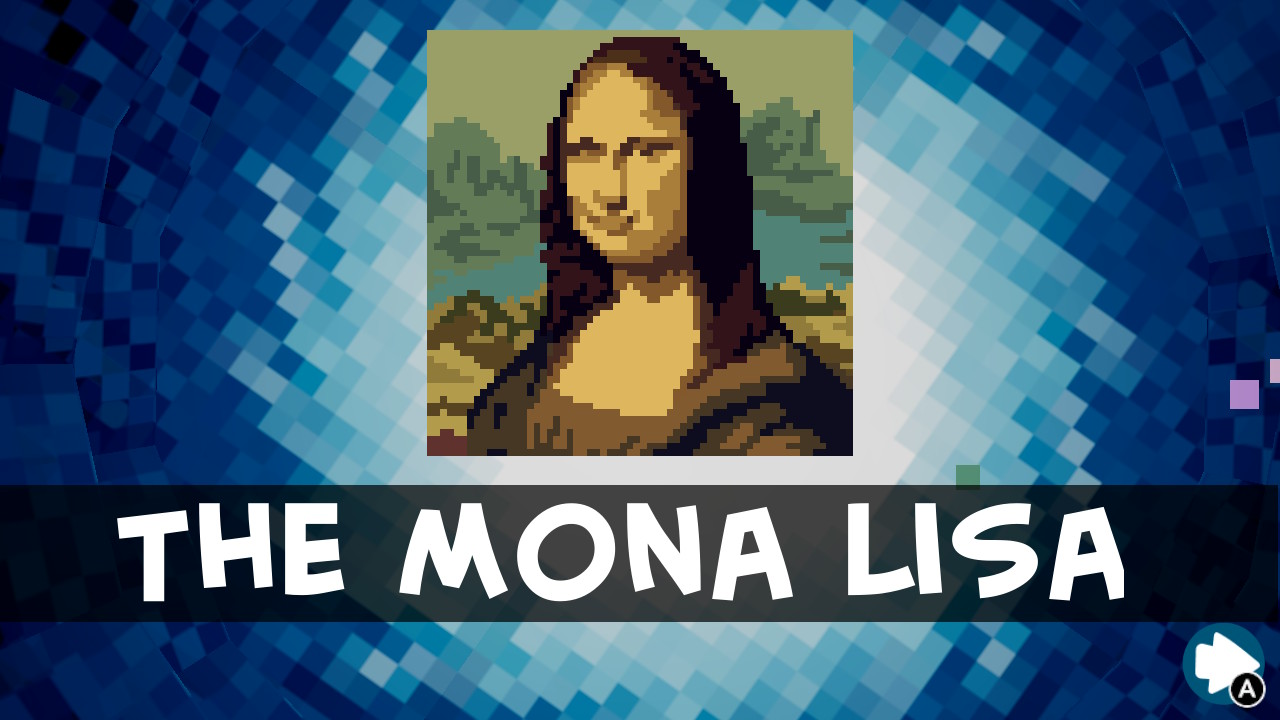 Everything here has a nice, easy-to-use presentation, with twenty-five new puzzle packs; each containing twenty puzzles within their subject matters. These range from a variety of topics from countries, artworks, iconic landmarks, historical and topical subjects. For instance, in the France pack, you’ll find the Arc De Triomphe or in the Sea Life pack, you’ll find Dolphins, as well as a whole host of other, surprising subject matters. This new package of puzzles also includes a new style of Pixel-art, with the addition of one-colour puzzles; each one housing a conjoining of one tone to present a solid block of colour.

Each of the puzzles on offer vary in their degrees of difficulty, or challenge in finding the solution to their completion; especially with its new inclusion of solid blocks. Inside each of the packs, each puzzle comes on a varying size of grid; from 14 x 14, all the way up to an eye-watering 128 x 128 square platform. Obviously, the larger the grid size, the bigger the puzzle and the harder the solution. This also presents a varying degree in the time-taken on each puzzle to reach their picturesque conclusions. Again, the smaller puzzles taking less time than the larger varieties. In a mix of casual and more long-term play, these pictures can vary from five minutes to upwards of an hour or more to fill in the whole grid.

Unlike the vast majority of puzzlers available out there, Piczle Lines contains no function to point out, or correct, any mistakes that you may have made upon each grid. This isn’t a bad thing, as it forces you to think logically and also adds to the challenge; the one thing that makes a puzzler an interesting one. This promotes a real sense of pride as you hear that cheer upon the grids completion; urging you to have one more go at a new puzzle. The game saves regularly as you make progression with each puzzle, it even saves multiple progression across a series of different puzzles should you chop-and-change between different packs and subject matters. 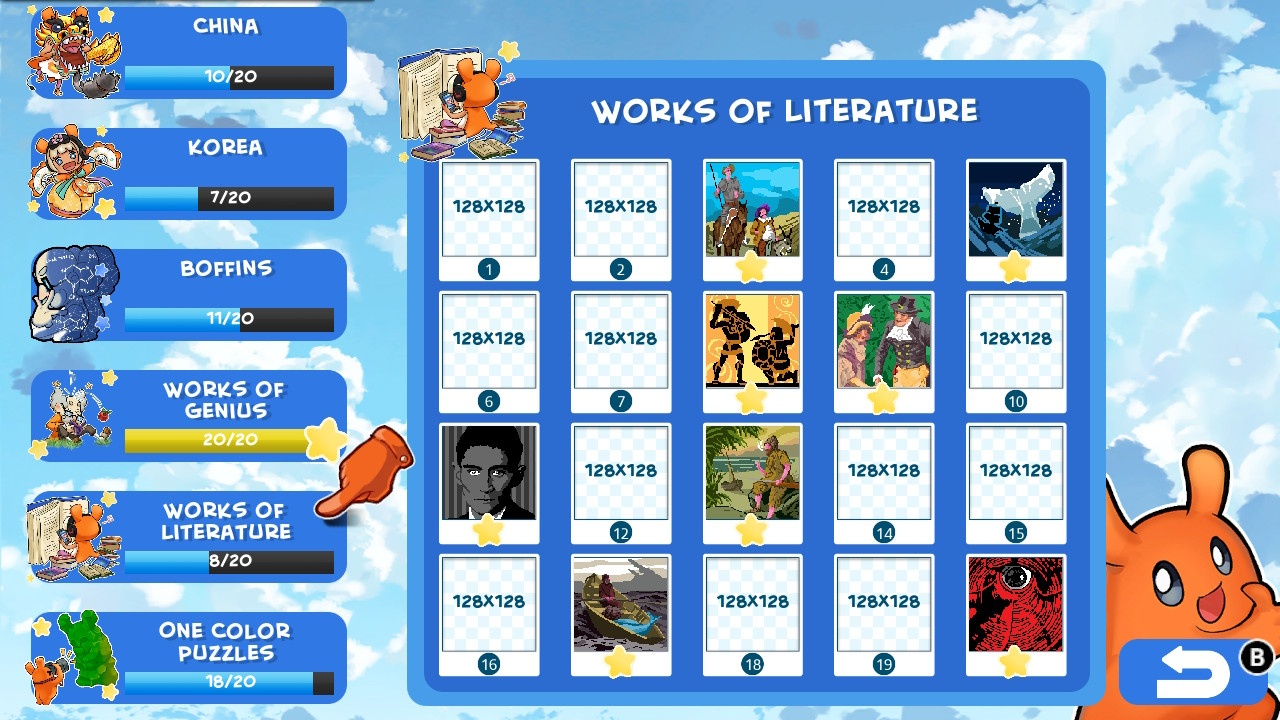 Although it contains the ability to be controlled with the Joy-con or pro controllers, this is a game that is best played using the Switch’s touch-screen capabilities. Using this technique, it plays as it would as if you were using a tablet; with pinching to zoom in and out, swiping to move the grid around, double tapping to remove mistakes and dragging to draw lines from number to number. However, if you primarily play with the Switch docked, then you can select numbered squares with a cursor and, by pressing down ZL or ZR, drag it to the next figure with the left thumb-stick. Grid movement is utilized with the left thumb-stick, coupled together with either the L or R shoulder buttons. X and Y act as the zoom functionally and A creates the necessary input to confirm your choices. The game is just as playable with this control scheme; although the touch-screen does produce a smoother result.

Presentation-wise, everything is created with a certain charm that will appeal to young and old alike; from the clear, colourful and concise menus, to the child-like cheers and yays as you select and complete the puzzles. It also contains a nice learning curve that gently eases you towards the more challenging styles on offer here. It all works towards a simplistic design, yet contains a plethora of suitable challenges to cater for all age groups, with a control scheme that makes it easy to pick-up-and-play.

Overall, Piczle Lines DX 500 More Puzzles! contains an abundance of satisfying puzzles for you to work through. It’s mechanics produces an original and addictive way of producing pictures, mixed with its elements of numbered puzzles to keep enthusiasts happy. Although it plays the same as previous versions within its style, whatever platform you may have played them upon, it does bring some new elements to the gameplay with its new solid colour puzzles and interesting subject matters. If, like me, you like to sit back at times and enjoy a puzzle game at a nice pace, then in my opinion, you can’t get better than these pixel-art style of games and there’s no better game at utilizing this function than of those of Score Studios’ offerings.