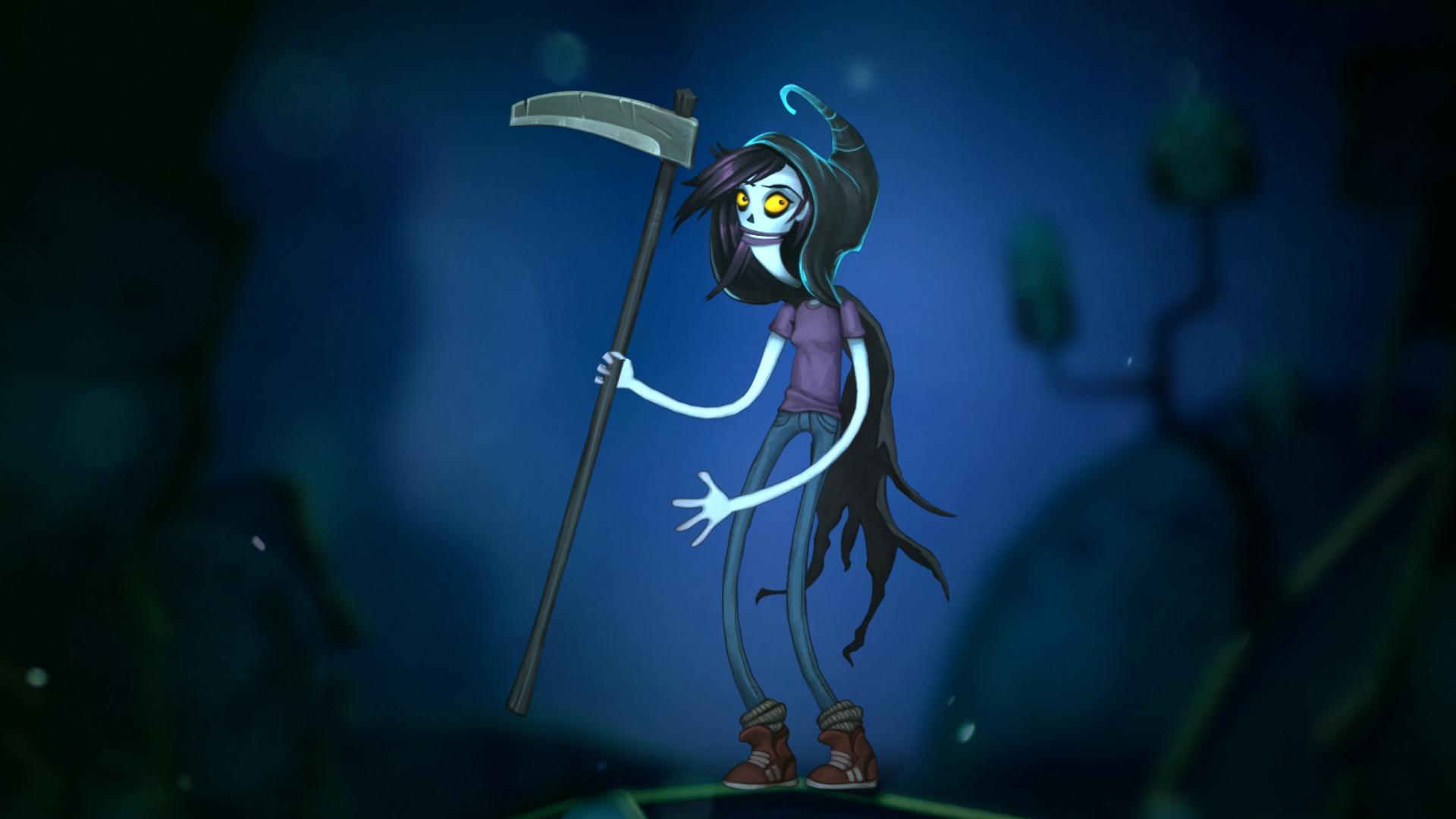 Zoink really is such a fascinating development label. On the one hand, they’ve made some wonderfully weird titles that got me laughing with great writing and visual gags. On the other, they’ve also created some really introspective and almost philosophical titles that have made people reconsider elements and aspects of their own worlds. It’s almost insane to me that a game like Fe and Stick It to the Man! came from the same place. But I think it showcases their ability to work within a given channel; when you need something serious, they can provide, but they also have an incredible sense of humor; and, if I’m being perfectly frank, I feel like they’ve got a much better taste in jokes and witty writing, simply because that seems to be a really hard thing to pull off without either going too hard or too tasteless. So it’s a magnificent pleasure to say that their latest title, Flipping Death, is their strongest humor presentation to date.

Poor Penny. All she wanted to do was go celebrate her first night of unemployment with her boyfriend, having snacks, smoothies and smoochies; and then to get into a car accident and, miraculously, escape unharmed! That takes some seriously great luck, and she probably shouldn’t have pressed it. But she simply HAD to duck into a mausoleum to try to coax some “just survived a car crash” makeout from her boyfriend, and then she went and died from a massive fall. But, whenever God closes a door, he opens a window, and this window just happened to lead straight to an overworked, totally spent Death, who gratefully and mistakenly thinks Penny is the temp he requested aeons ago. Handing over his scythe and cloak, Death heads off to the moon for a vacation (no one’s ever died there…yet) and Penny needs to learn the ropes of being a Reaper. Surprisingly, there’s less “taking souls” and a lot more “helping souls cross over,” and this comes in the form of solving their problems. This also leads to Penny dealing with some of her own problems, like “How can I undo being dead?” and “What is happening with my body??” Yea, things start to get weird, but, honestly, how could you be surprised?

If you’ve played Stick It to the Man, you may have a slight inkling of what you have in store for Flipping Death. Set as a side scrolling, problem solving adventure of sorts, Penny must make her way through the different parts of her town, identifying problems that her ghost cohorts are experiencing (who killed me? Why is my heir a wimp? Get my body out of a whale!) and solve them in relatively creative ways. A couple of big things to keep in mind, however: one, Flipping Death is very, very much a platformer as well. So, while you’re learning and interacting with characters in hilarious and creative ways, there’s also going to be a lot of precision jumping going around. Including this thing where you can throw your scythe and teleport to where it lands, which is, in theory, a cool move. However, it takes a bit to really get good at it, and you actually need to hold the controller in a very creative way to get the best out of things. Aim with the right stick, throw with ZR. So you have to sometimes double up on hand with the right Joycon to make the most out of things, as you hold the stick, jump, and then throw the scythe to achieve maximum height. It’s wonky, but it works, and doing so sometimes can skip you ahead dramatically in certain areas, because the scythe’s limit is only how far you can throw it. I discovered this in chapter V in order to get to some particularly tricky quest bugs (more on quests in a second). 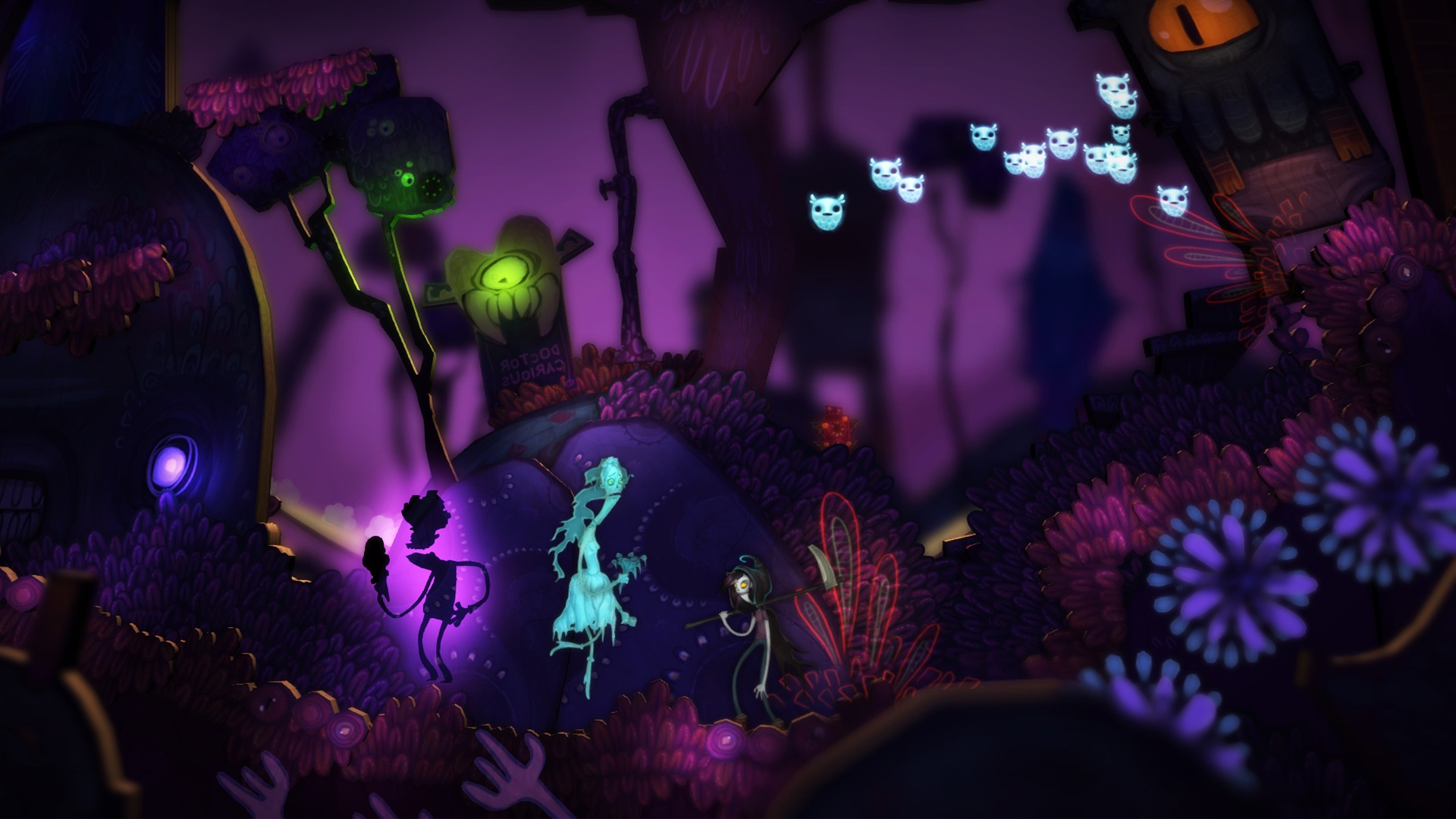 Additionally, the possession mechanic is contingent on three types of souls that you can “reap” while you’re in the ghost world. Penny will have zero problems with the most common type, which fly around in swarms and just require you to run into them. Then there are the two special types, which present as timed puzzles. The first involves you running around to catch the spirits before time runs out, with the timer being represented by a slow but gradually more urging buzzing in the JoyCons. This is usually easy enough, and I generally didn’t have trouble collecting them all, but there were a couple where I felt like the spirits were invisible till I was on top of them. The second one is the real pain, where you have to outmaneuver one giant spirit until it explodes, again with a timer based on JoyCon buzzing. This is relatively tricky, especially because the space for running is small, the attacking spirit is big, and Penny has tight but small jumps. If you learn how to do the double-handed JoyCon trick, it gets easier, and there’s generally only one (or zero) per chapter.

Alright, enough complaining: let’s get to the great points of Flipping Death! Firstly, the script. My dear sweet God, this game is shatteringly funny from start to finish. Rather than just lean on the gas and constantly spew out quips and puns, Zoinks! does a phenomenal job of pacing things out between surreal, consequential and flat-out bizarre. There isn’t a single character who seems disconnected from the role they’re set to play, from Penny herself (who is in a constant state of mild disbelief at her situation) to someone like George the unrepentant murderer. You get into the minds of animals like the evil Pocus the rabbit or Meatball the dog, you get to see the great-great-great grandfather of the local jazz musician, and even the frightening ghouls that make up a big part of the latter half of the story have their own quirks and personalities. There are moments of laugh-out-loud hilarity, like when Tiffany finds a stuffed doggy, or watching a tennis player attempt to return volley a bowling ball. The dialogue never feels wasted or apropos: everything is as it should be.

Additionally, the game length in terms of story is a perfect serving size. You have a little time to get familiar with the whole concept of being Death and what you can/should do, then you get your own personalized story arc, some 3rd act sense of tragedy and hopelessness, and then a nice conclusion. This game may not reach double digits in the main story line, but that’s what also makes Flipping Death so endearing: it knows exactly when it should end a joke and move things along. My kids personally wanted me to keep running around poking people for the entirety of the game (especially to see what else the police officer would say about it), but they appreciated when I moved it along, especially when we encountered a mermaid with a chainsaw. They had never considered a mermaid with a chainsaw before, and now they have new life goals. Who am I to tell them no? 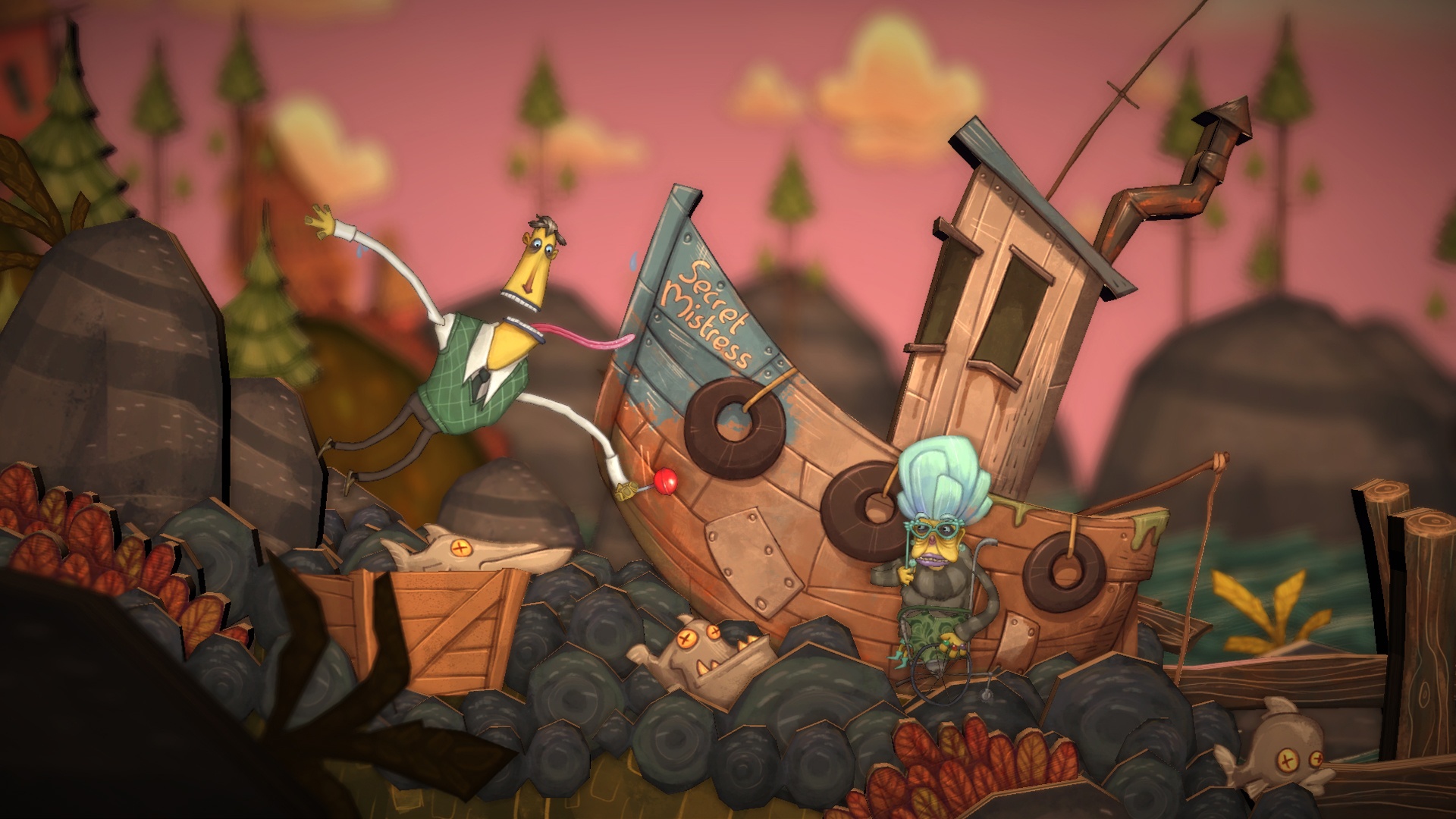 And it’s not just how the game reads, it’s how the whole thing is read. Flipping Death is able to tap into a vast array of voice talents, ranging from all dialects, accents and walks of life (ha), giving this some of the most natural and worldly ideas that I’ve seen in an adventure game. I couldn’t even begin to tell you where everyone is from, mostly because I’m afraid to guess wrong and offend someone, but it’s fair to say that several countries are covered in proper voiceover work, and it’s worth listening to absolutely everyone speak, especially the witch on fire. Best of all, there’s a delightfully gravelly narrator who sums things up between each chapter and helps make the loading screens go faster, and also has his own take on how to interpret the events.

Probably the best part is how Flipping Death handles the different types and levels of players who’ll be coming to experience this long-awaited game. If you’re just here for the story and the laughs, fantastic, you’re in the right place. Here’s your robe, your scythe, some macabre but silly framing devices, plot moves that way, don’t let the prelude hit you on the way out. If you’re a longtime adventure puzzler, then good news! There’s a bunch of side quests each chapter that you can accomplish to unlock trading cards of each character within the game, and every quest is a unique and whimsical journey unto itself. Get a parade marching, destroy an ice cream cone, start a bunch of fires, accidentally launch a villain back in time, we got a bit of everything! And you can re-start the chapters at any time to focus on the quests if you wish (MAKE SURE TO BEAT THE GAME FIRST SO YOU DON’T RESET YOUR PROGRESS BY ACCIDENT). Finally, the hint system is entirely optional, somewhat subjective, and super helpful. Rather than use riddles or straight up telling you, each hint is a still picture that gives you a general idea of what to do next, but not necessarily how to do it. That last part is up to you, Captain Heropants. Get your quest on.

Flipping Death has everything. A plot line reminiscent of a Discworld novel but clearly not ripping off the execution or motifs. A fantastic set of characters who all have their place in the world, be it as a fireman who ignores heart condition warnings or someone who knows the secret flavors of ice cream that the government covers up. A zombie alpaca. A sleephacker (someone who hacks computers in their sleep, clearly). And a roller coaster ride of great graphics, an enthralling story and some of the best laughs that I’ve had on my Nintendo Switch to date. Players may have waited a while for Zoinks! to deliver the goods, but it was worth the wait and you’re gonna love this game. If you put the console to sleep and wake up to find all possession outlines of people missing, just close and re-open the game to fix the problem: I never had a crash problem, but occasionally the outlines disappeared. But most of all, have fun, enjoy, and explore to it’s fullest. After all, it’s just a matter of time before we all die. The End. There is still no moral.