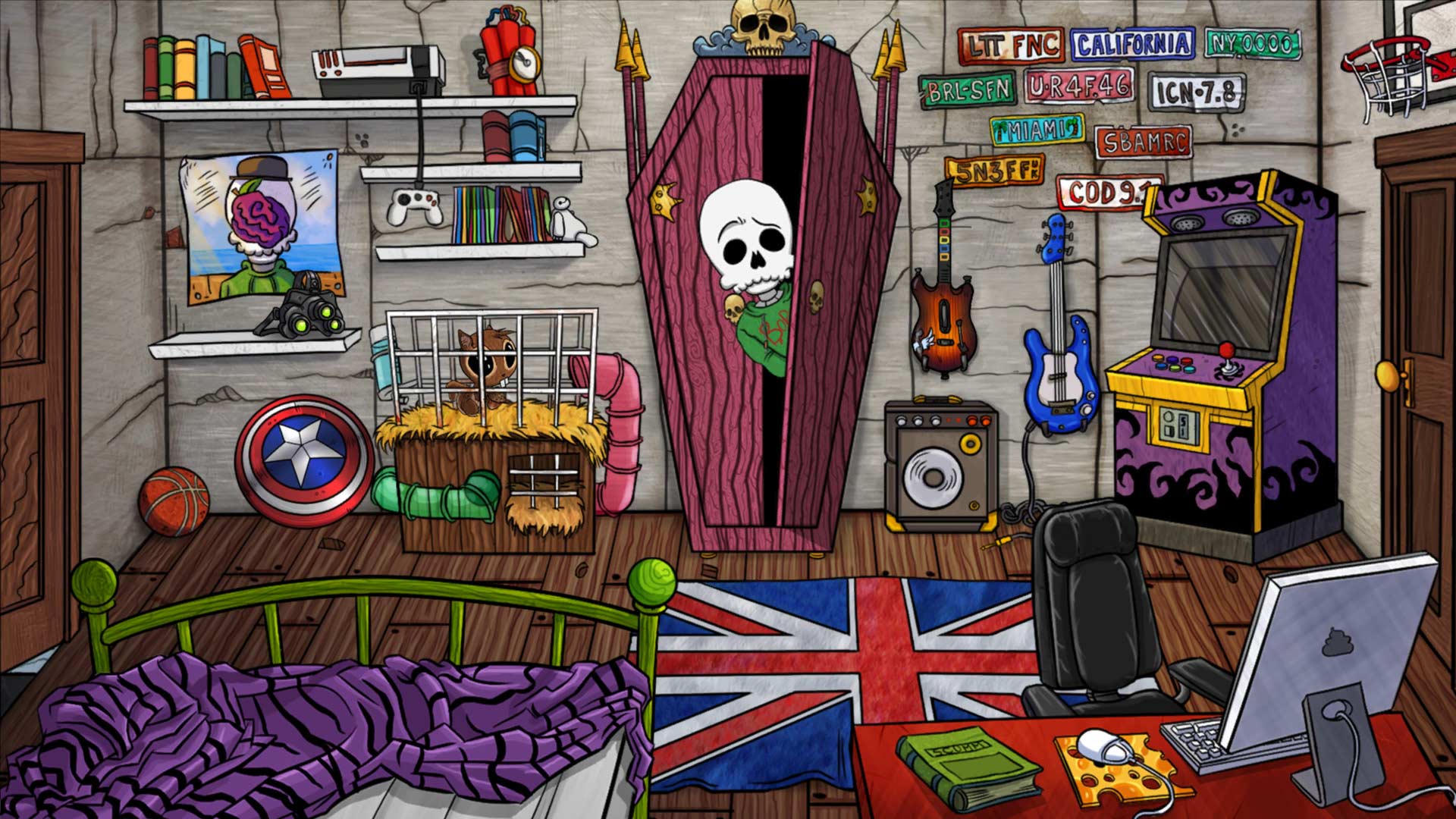 The Wardrobe is a point and click adventure game where you take control of Skinny, a young man who is recently deceased as a result of an unfortunate mishap. Skinny is sentenced to an existence in a wardrobe, where he watches over his friend… who inadvertantly murdered him. That last bit seems a little strange and I think Skinny is a bigger man than any adult I’ve ever met to so calmly accept the fact that he’s dead and it’s his friend’s fault–yet he bears no ill feeling.
The Wardrobe’s story has good intentions, but it all gets tangled up in quirky and amusing characters. It becomes less about saving Skinny’s friend, Ronald, from eternal damnation, and more about how many wacky things can be jammed into one title.
The first thing you’ll notice about the game is how bright and colourful everything is; the animation and art style is very reminiscent of 90s cartoons. Once you start looking around the scenes, which are stuffed full of as many items as the developer could fit, you’ll notice little details that will bring a smile to your face. There’s just so much pop culture in the backgrounds and the writing that the modern gamer/anime afficionado/television binger will appreciate. Recognition–that aha! moment–is a warm fuzzy feeling that stays with you throughout the journey.
The Wardrobe is fully voice-acted, meaning that character dialogue and narrative text is read to you. The recordings are hit or miss, which I’ve found to be a common issue in smaller indie games–due in part to a lack of volume normalization. Some voices sound as though they’ve been recorded through a different medium than others and in some cases, the reading was stilted. The tongue in cheek humour is prevalent throughout the script, including flavour text for items and Skinny’s reactions to objects or attempted puzzle solutions. 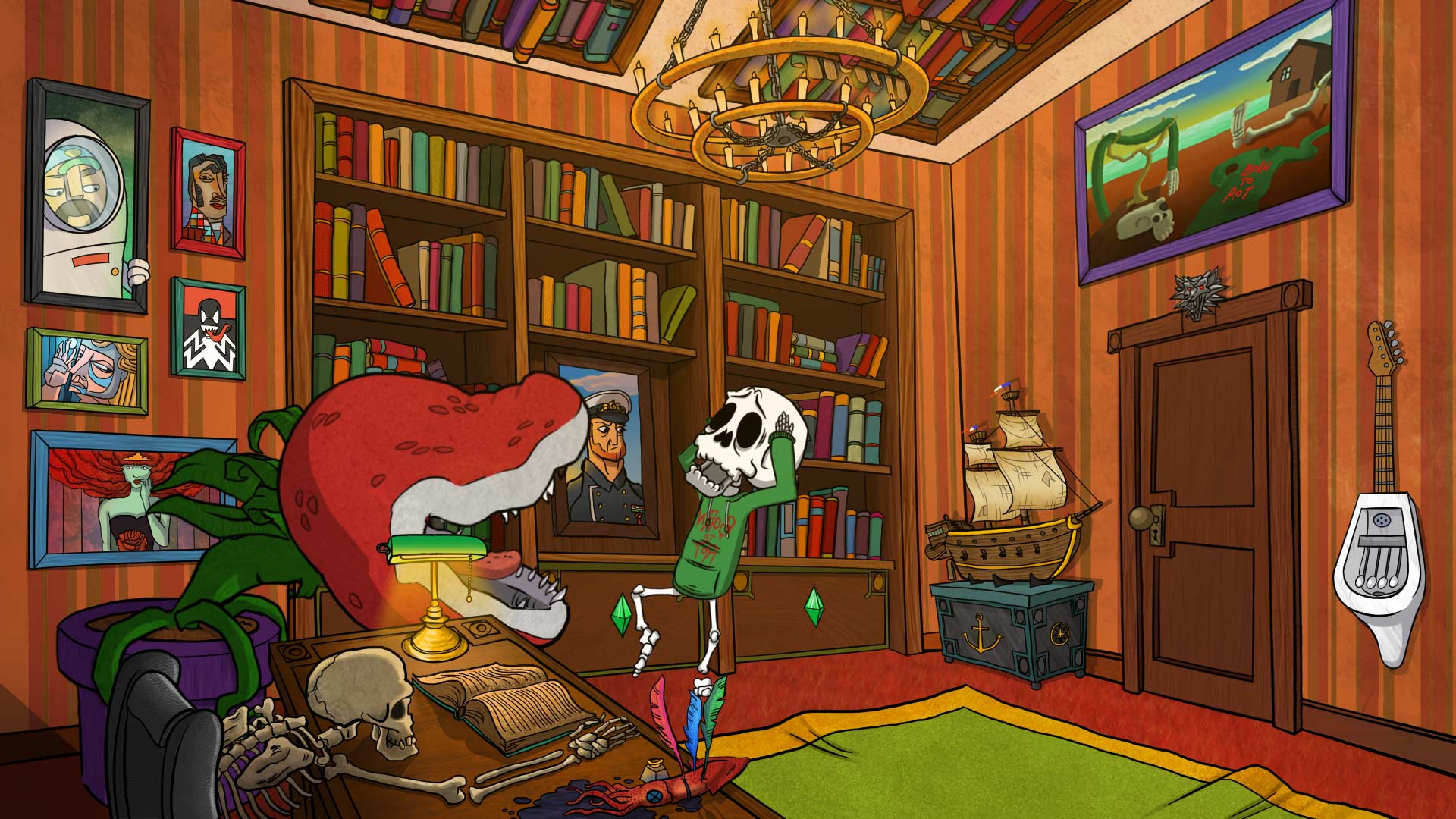 The game’s voice is its strongest aspect. Unfortunately, that isn’t enough to save it from the frustrating nature of its puzzles.
In most point and clicks, there’s a hint system or at least context based comments when you interact with your inventory that point you in the right direction. Sometimes, there are even NPCs that will expand on a previous point or simply repeat it so that you know it’s pertinent to what you’re currently trying to achieve. The wardrobe lacks anything of the sort and as a result it’s often difficult to figure out what to do next. It’s frustrating because many of the solutions require you to use something that you picked up twenty minutes ago and have already long forgotten or for you to remember some obscure detail that you’d seen before that suddenly becomes relevant. It isn’t good game design and there’s a marked difference between being challenging to solve and being obtuse.
I often found myself clicking on anything that could be interacted with or dragging objects within my inventory onto each other with the hope that they’d be combinable. The former wasn’t helped by the fact that there are four ways to interact with objects and the latter, well, sometimes they were, but then I couldn’t rightly figure out to do with the newly created object.
The game is also quite short– assuming you can figure out what to do. It took me about 6 hours to complete it after finally having in and finding a guide for the Steam version, though there is a trophy for completing it in under 2 hours so point and click experts may find themselves finishing the game just as soon as they’ve started. 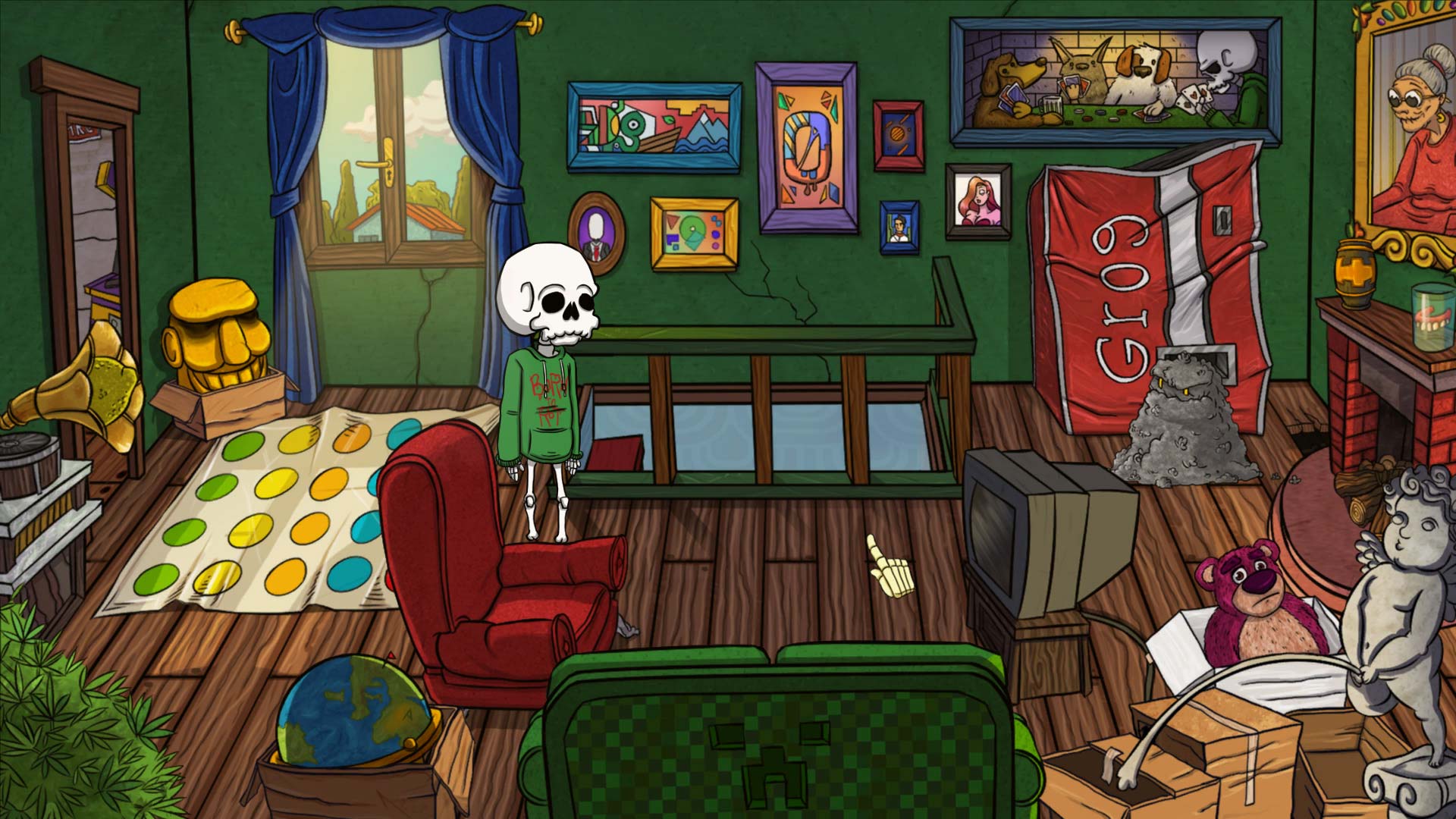 Just okay. Certainly, the game has a strong voice and presentation, but every puzzle feels like three steps forward and five steps back, which does not make for an enjoyable experience. You shouldn’t have to look up a guide to finish a game, yet I did. The Wardrobe also seeks to approach sensitive subjects, but I saw very little of that in the way it made a joke of everything. Only in the game’s last five minutes do you see any of the mature themes and even then, they end on a dissatisfying note.
If you’re in it for the laughs, fine. But 14.99 is kind of a steep price for three or so hours of laughs with nothing taken away at the end.