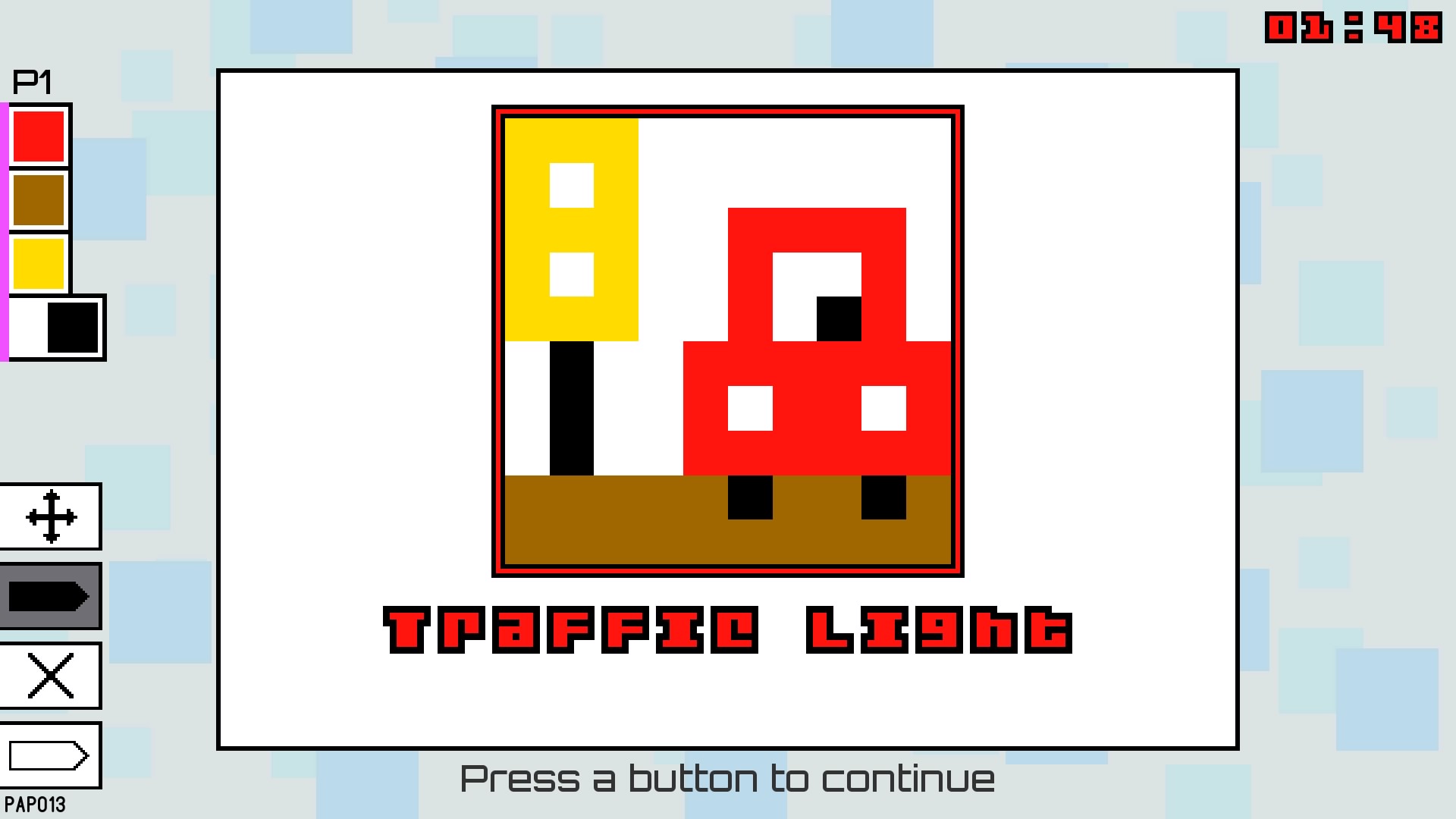 It’s no secret that one of my favourite forms of puzzle game is the pixel-art variety. I’ve played a countless number of titles that bring various forms and mechanics to a simple premise, such as Piczle Lines, Fill-a-Pix and Picross. However, there was another title that has always eluded me until now: Lightwood Games’ Pic-a-Pix Color. This neat little title follows along the same trajectory as other pixel-art puzzlers; filling in a series of squares upon varying sizes of grids, until each of the filled-in segments come together to produce a picture. It’s a premise that follows a tried-and-tested formula, yet is one that produces such a feeling of accomplishment, that it’s simply unmatchable by any other sort of genre.

Rather than drawing a series of lines from number-to-number, as with many other titles that run in a similar vein, Pic-a-Pix Color presents a very different take on the subject, yet still retains that satisfying level of brain-power and deduction to solve its puzzles. It works in the way of presenting you with a series of grids that vary from the smaller 5×5 varieties, up to a sweat inducing 20×20. Along each of the X and Y axis that run along the top and down the side of the grid, a series of numbers are displayed that detail the amount of blocks that are needed to be filled along its horizontal and vertical axes. It all sounds simple enough, but to add an extra element into the mechanics of its puzzles, these numbers also denote a certain colour that must be used when filling in the blanks; adding a nice layer to the proceedings that spruces up a classic form.

There are one-hundred and fifty puzzles on offer here, more than enough to keep you amused on a rainy day, or during a daily commute. One of the features that I really enjoyed with this title, was the fact that the pictures content is unknown to you until it has been completed. It produces a form of gameplay that keeps you guessing until the end; even sometimes forcing you to look again until the finished image takes a form when you realise the subject matter. This in turn, produces a nice feeling of accomplishment, especially for younger audiences when they finally see what they have created. 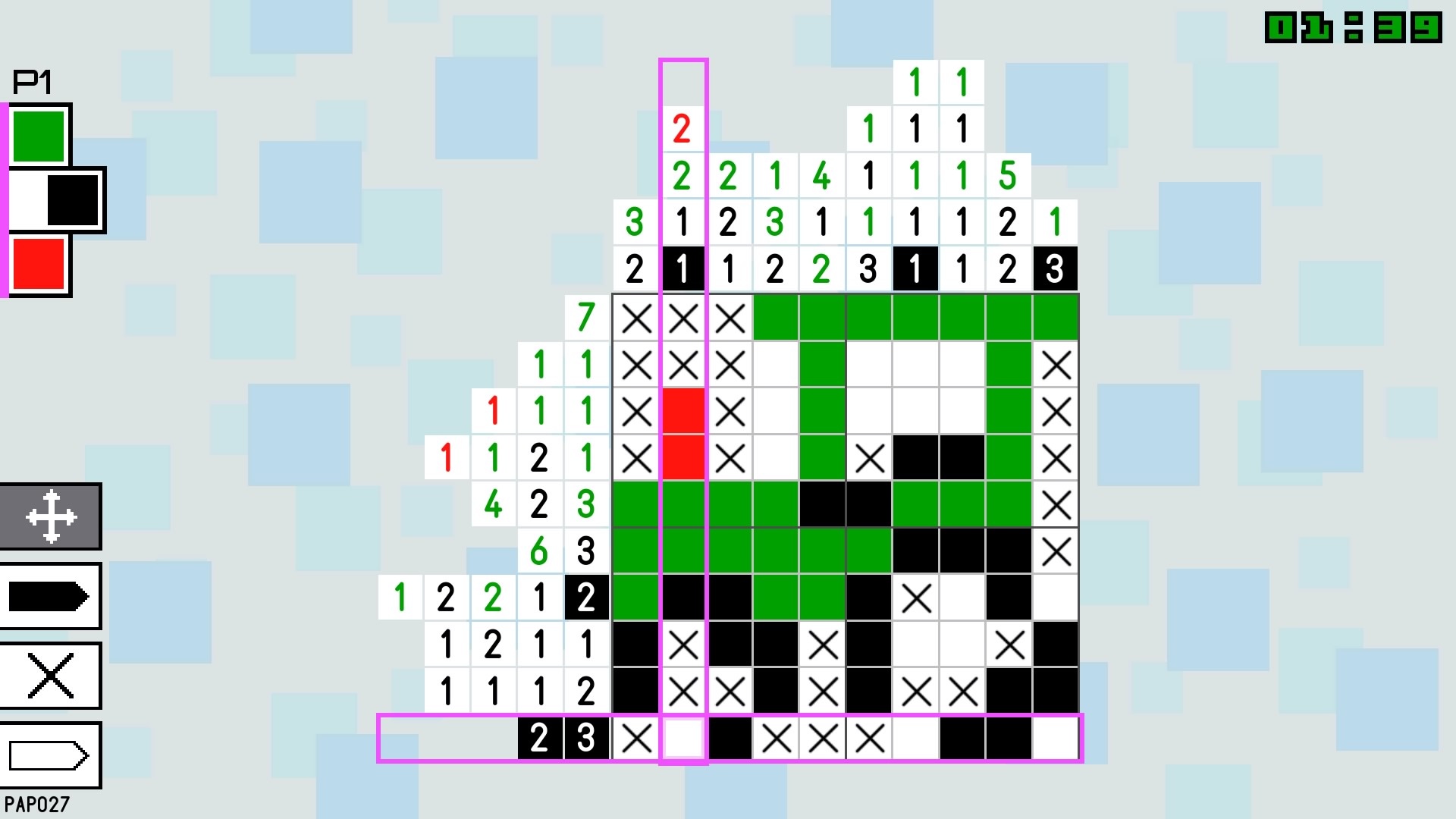 Saying that though, the mechanic of this game, with its sudoku style of play, may be a bit confusing for younger players; although once its formula is explained, they should be able to grasp the basic concept of its puzzles. You see, there is a method that need to be employed here, filling in the smaller values with a corresponding colour, then using the art of deduction to come a conclusion of how the rest of the grid fills in. It also contains a touch of educational values too, allowing both parent and child to work together to solve its mental and mathematical problems. Although there’s nothing here that is too difficult, or frustrating in the way it plays, it does strike a very fine balance in its challenge; even with the smaller grids, you can find yourself trying out a variety of moves in order to trigger the solution.

It’s important here, to make a note of the number and colour structures. If the coloured number denote a green before a yellow, then that is the placement of the colours upon the grid. However, it’s still all too easy to position a block in the wrong position and for you to not see where you have gone wrong. It’s in this mechanic that the game produces a decent challenge, yet still promotes achievement. For many people, this style of game presents a pre-conception that it should be played on a device such as a tablet or phone; mainly due to the touchscreen capabilities of these platforms. If you’re one of these people, then you simply couldn’t be further from the truth.

Pix-a-Pix Color is one of those games that sits very comfortably upon the home consoles upon where it has been released. Using a controller to move your cursor and select colours works seamlessly in its execution. Using the left thumb-stick, you position your cursor with the X button confirming selection. Picking what colour you must use, from a comfortable three, up to a decidedly tricky five, is performed with the shoulder buttons. You can erase blocks with O and a handy Fix button bound to the triangle, shows you areas where you may have gone wrong; thus making it more child-friendly if playing alone. 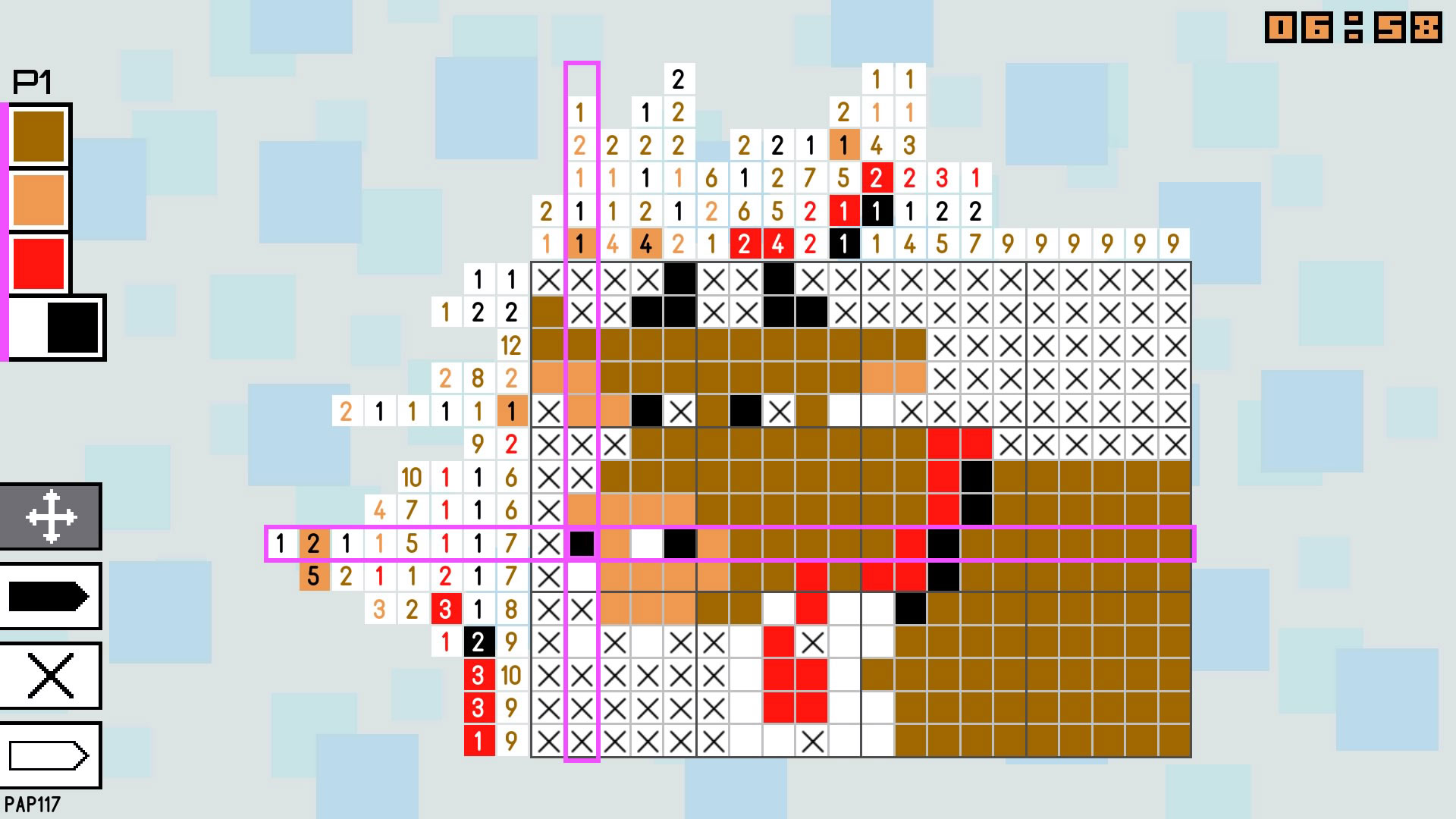 As with the majority of Lightwood Games’ titles, this puzzler also contains a cross-buy element, giving you two games for the price of one; one for the Playstation 4 and the other for the Vita. Both play independently from each other with no cross-save facility, but whatever device you play on, they both follow in the same satisfying formula. In fact, one advantage that the Vita version has over the PS4 is the full  utilisation of the touchscreen, but it doesn’t impact at all on the overall experience.

Trophies are supported and it is here, where the developers have injected a touch of genius with the requirements needed to gain them. Each of the trophies have been set up in a way, that it forces you to play this game; especially if you’re a trophy hunter. This formula adds a touch of replay value to the game. This is further bolstered by a timer which records the total time taken to complete a picture, giving you a reason to return and beat any personal bests. Presentation-wise, everything is displayed in a very clear, colourful and concise fashion, allowing you to delve into the game without delay. It’s menus are easily navigated making it an easy game to pick-up-and-play.

Overall, Pic-a-Pix Color presents a sublime example of a pixel-art puzzler, as well a fine example of casual gaming. It’s a very relaxing experience, making it ideal for a game you can chill-out to, or a title that can be played in a family-friendly environment. It’s puzzles are suitably pleasing, as is the feeling of accomplishment you get when you solve each of the pictures on offer. It offers a nice little twist on the concept of digital colouring books, as well as provide an educational value to younger players with its ability to help solve mathematical and artistic problems. With its cross-buy formula and trophy support which encourages replay values, the Playstation platforms are the best way to experience this title and if, like me, you’re a fan of pixel-art type of games, then this is a title that will satisfy that itch in the most pleasing of ways.