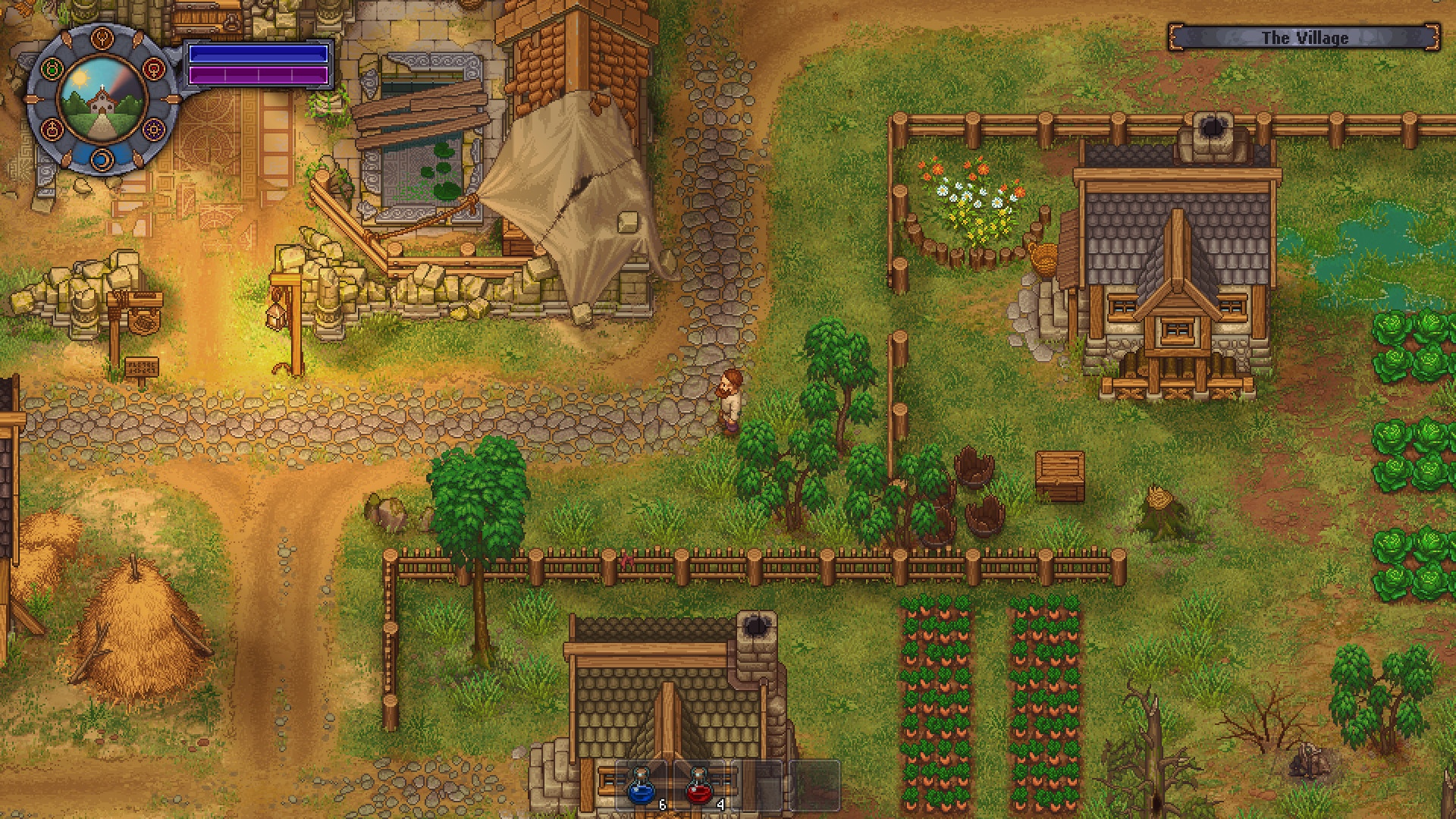 What if indie sensation Stardew Valley got jiggy in the morgue with retro bust-em-up Punch Club? Sounds pretty messy, but the result is a charmingly macabre top-down medieval RPG crawling with elements of strategy, management and maggots.

Just what is Graveyard Keeper then? Well it’s essentially Stardew Valley, but instead of growing crops, you bury corpses – literally making them push up daisies. Permeated with dark humour that somehow oozes charm, Graveyard Keeper flings the player into the role of the Keeper – an unfortunate soul who’s passed away a bit too soon. That said it kinda was his own fault for walking out in front of a car with his mobile phone in hand – lessons to be learnt! Anyway, to make your way back to your true love, you need to find a way to get out of this grim little medieval town and back to the future.

As the new Keeper you’ll have to maintain and improve a creepy medieval town’s church and graveyard. To do this you’ll need to replace headstones and borders, plan new graves, build more pews for the church and even perform religious services. 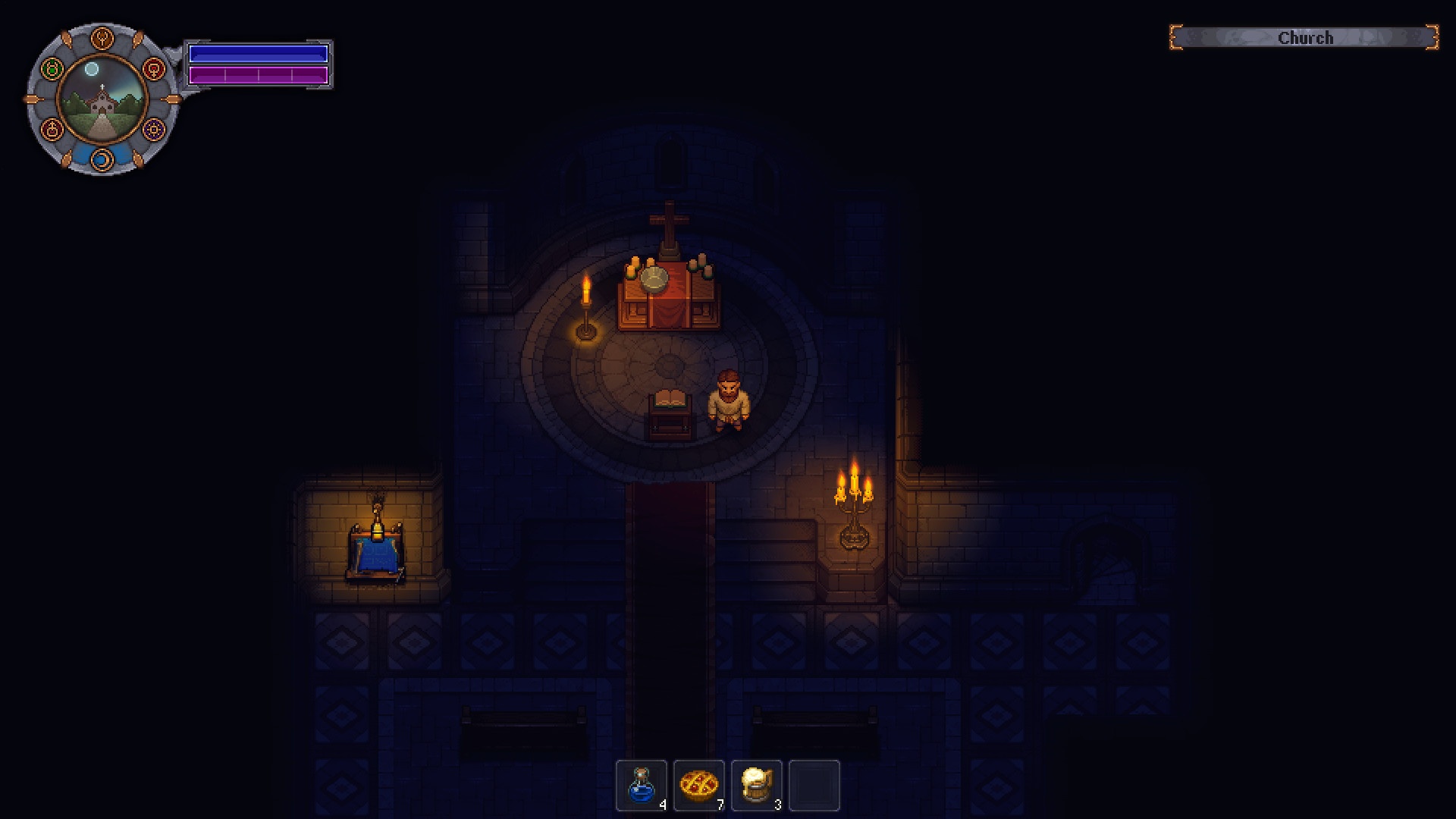 Graveyard Keeper pretty much buries the player from the word go – whilst there is a tutorial, quests come thick and fast from the word go. I spent ages trying to complete the first few, only to realise that I wouldn’t be able to achieve them until the late-game, when I had access to better stuff. The quest system is a little bit odd – where NPCs have set quests for you to complete in stages – each getting progressively harder. Some frustration occurs here when you find that you haven’t got the right objects or ability to reach said objects yet. This can be especially annoying when many NPCs will only be available on certain days – forcing you to wait until the right day rolls around again. That said, if the quests were easy to complete and didn’t contain a management element then the game would be very boring.

The developers, Lazy Bear Games are also responsible for Punch Club – a Rocky Balboa simulator where you take a boxer from zero to hero in a retro pixel-art world. Whilst Graveyard Keeper extends this style (minus the boxing), it also holds onto the energy system that was so desperately frustrating in Punch Club – although I’m gonna say that it really works in Graveyard Keeper. Essentially every time you work on a task you lose energy, until you need to sleep. To start with this can be a bit of a grind until you unlock better tools and crafting tables to make working more efficient.

I mentioned the pixelated, retro graphics style just above there. It works so well with Graveyard Keeper. The lighting is incredibly atmospheric, especially at night when the glow bugs appear, and the graveyard mist takes on a menacing new form. There is nothing in the world that doesn’t appear to be interactable, as the graphics are so fantastically stylised that the world really feels alive – clearly created by the developers with much love and attention.

Despite the grinding nature of the energy system, Graveyard Keeper has that undoubtedly addictive “one more day” feel. I drew immense satisfaction from making my houses’ workshop more efficient, churning out loads of useful resources and making a tasty profit from the townsfolk at the same time. In spite of its name, there’s so much to do in Graveyard Keeper, such as fishing, cooking, mining and exploring. Getting the balance between these activities is key, as it’ll help you progress into more lucrative and interesting areas of the (pretty big) map – which can take half a day to traverse if you’re not careful! 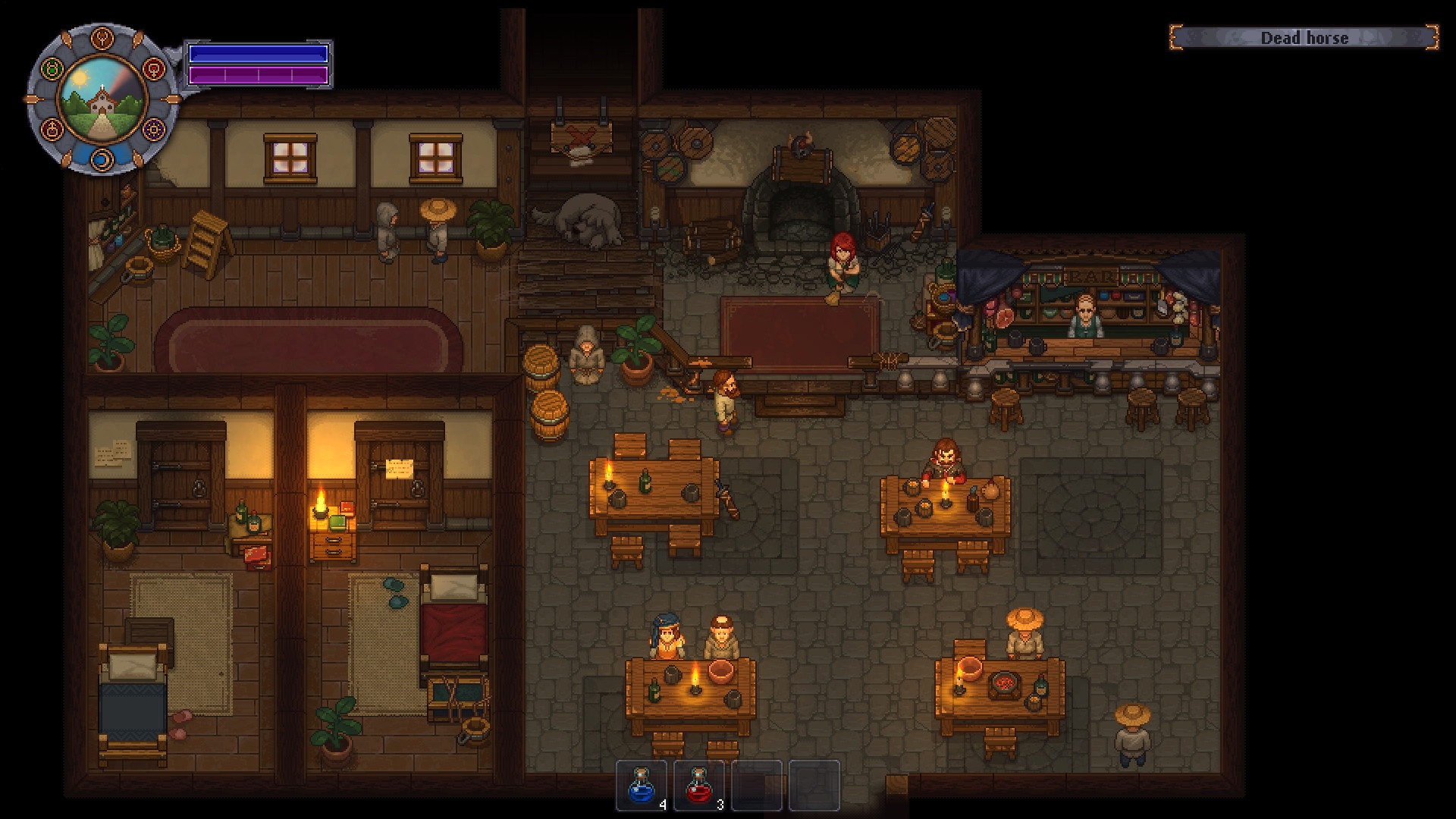 Graveyard Keeper’s workshop area is something you need to get to grips with quickly – specifically the placement of crafting tables and machines. This is a simple system, but due to limited space initially you really have to be careful of what you build and where. I got locked into a situation where I was unable to craft any iron because I’d mined all the swamp iron and didn’t have any more room for an area for cutting up raw iron chunks. A bit of re-jigging was necessary and I got there in the end, but I’ve been surprised by the amount of people complaining about the same things in the Steam reviews – feeling really butt-hurt by the lack of hand-holding that Graveyard Keeper has to offer. This is definitely a game for people who like management-style games and a good old-fashioned spot of using your brain.

I noticed that on the Xbox One version, the initial load time was very long – taking a few minutes to start-up. There was also an issue with a laggy framerate in certain places such as the heavily wooded areas and at night-time when there are lots of on-screen effects. The PC version however, appears to run smoothly with no such issues. My only other gripe really is that some lines of dialogue contain grammatical errors that make you read the sentence over again – missing out on the rest of the dialogue bubble when the NPC moves the conversation on prematurely.

Graveyard Keeper is an excellent game. If you go into it expecting Stardew Valley, you’ll be a tad disappointed as it has a largely different direction. That said, Lazy Bear Games have exhumed a brilliantly addictive game with a dark yet humorous theme – a unique mash-up of medieval, management RPGs.