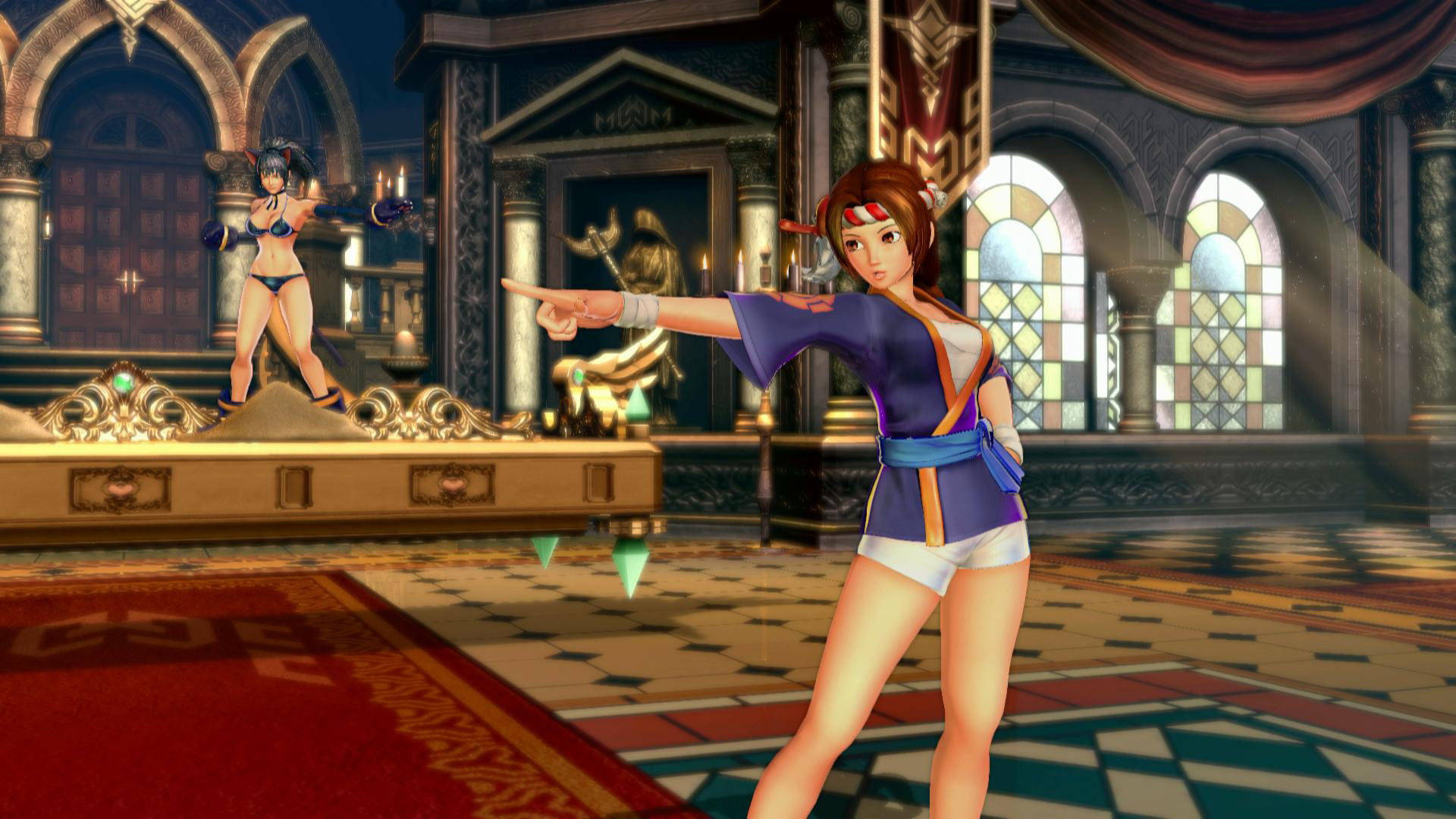 Video games have properly fractured to the point where the argument of “kids” and “adults” no long really holds weight. For those of you who grew up in the 70s and 80s, it’s really vindicating to see video games, as a whole, receive accolades for storytelling, dramatic acting, special effects and generally great enjoyment. Mario isn’t just for children anymore: he’s an icon that rivals most sitting world leaders in terms of recognition. There are still games for children, let’s be clear, just as there are games that are better suited for more mature audiences. If you bought It’s Spring Again and Gal*Gun2 for the same person, they have a very, very interesting view of the world around them. But there’s no reason to pretend that we need to shield away the youngins anymore from different walks of life. Having said that, please make sure you know what you’re getting into before you buy SNK Heroines: Tag Team Frenzy.

SNK Heroines: Tag Team Frenzy is one of the most oddball fighters that I’ve ever picked up. Apparently taking place right after the last King of Fighters tournament, several well-known femme fatales wake up in a mysterious mansion that they learn is somewhere in a pocket dimension. Additionally, their traditional garb has been removed and replaced with costumes that seem to play into their host’s specific fantasies. Leona has been moved into a bikini with giant cat ears. Nakoruru (of Samurai Showdown fame) is stripped of her traditional gi and put into a latex vampire costume. And, inexplicably, Terry is in his stereotypical outfit, only now he’s a woman with giant breasts. Sure. Anyways, the girls team up, two at a time, to battle it out in order to find the dark, perverted master of this tournament. After all, he plans to use their energy to take over other worlds, and only by defeating him can they stop the madness.

The fighting of SNK Heroines: Tag Team Frenzy is a sort of interesting one. Your primary buttons are a weak and strong hit (with mixed comboing), a hold/throw button, a block and a “special attack” that uses your power gauge. The Tag Team part of the game comes from a second character, who is your ally and partner, that can be swapped in at any time to change up fighting styles and techniques. Moreover, your partner is there to use items that you pick up during the fight: some items hinder/damage the opponent, while others might amp up your fighter for a short period of time. The whole thing culminates in the Dream Finish, a single button power move that is the only way to end the fight. You must whittle away the opposing life bar, but zero health doesn’t mean game over unless the Dream Finish lands. 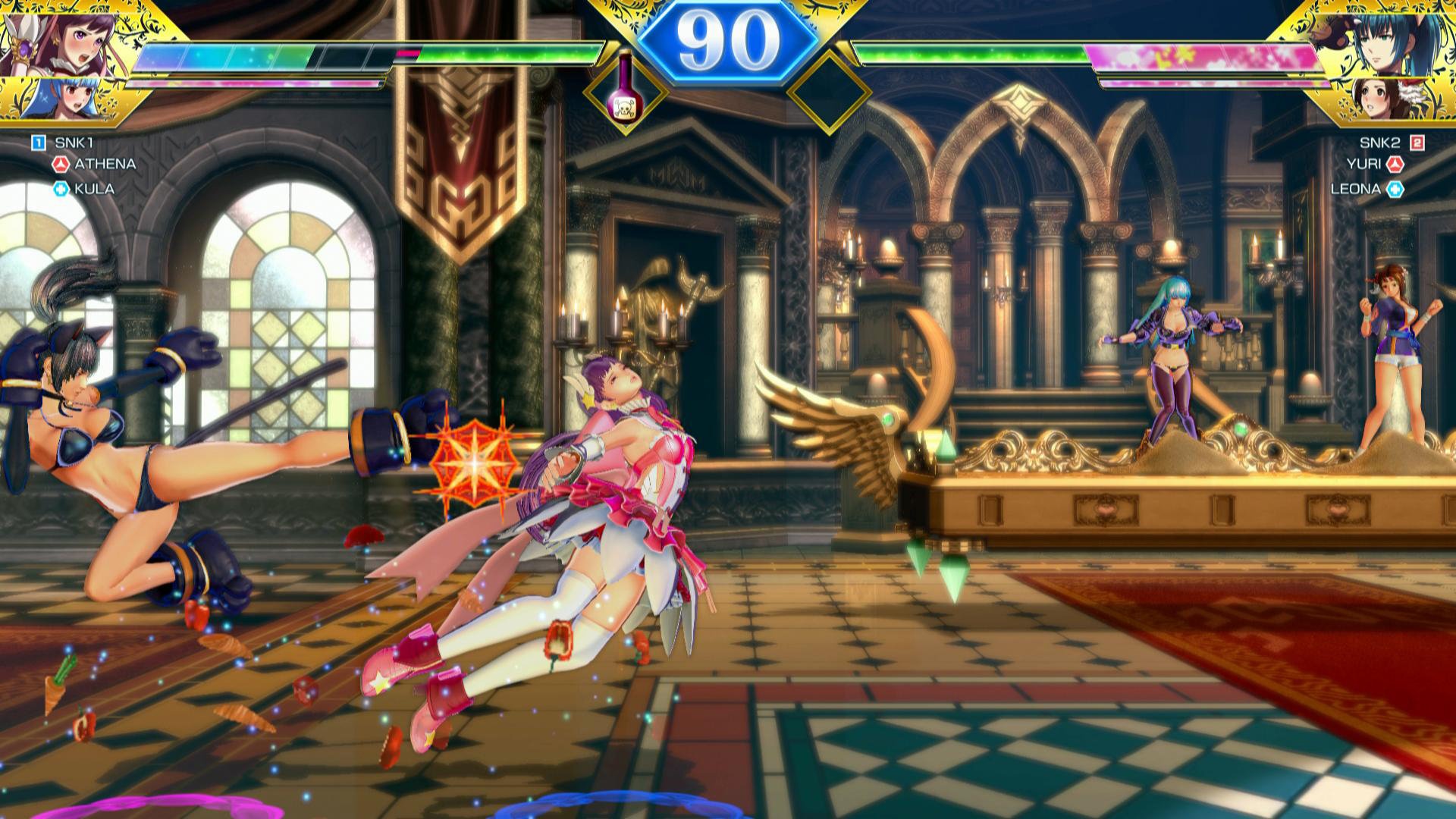 Right away, the imbalance in how the match goes creates a strange dynamic in SNK Heroines: Tag Team Frenzy. Firstly, a single defeat decides the whole round, so there’s no time to feel out your opponent’s style. One loss and it’s game over, so balls-to-the-walls it is. Additionally, the simple fighting style does make it very easy for non-fighters to pick up and play, but not in the same way that Pocket Rumble gave us a short while back. Instead, you get a huge amount of frantic, almost panicky button mashing that only gets worse when you build towards the ending. More often than not, you’ll end up with two people, both in the red, just trying to figure out who can successfully land the Dream Finish first. This is made more difficult by the fact that the Dream Finish can only be used if you have enough energy in your special attack meter, rendering the need or the purpose of using special attacks almost null.

When it comes to winning, one of the best strategies is just to go as fast and as hard as possible at all times. Blocking eats up time when you could be punching, a strange approach but not unreasonable. Once you’re both at Dream Finish territory, however, it’s seriously a contest of the fastest reflexes. Unlike some ultra or super moves in other fighting games, the Dream Finish moves here are done a millisecond after the animation announces them: there’s almost no time to blink before it lands. You can potentially block the Dream Finish, but that’s a tough chance to take (unless you’re the CPU: more on that in a moment). Though, I must admit, despite SNK Heroines MASSIVE install size (nearly 12 GB), everything was as fluid amd sparkly as I could want. Each punch and kick, for some reason, threw up a massive cloud of sweets and toys, and the whole thing was pretty smooth with nary a crash or a hiccup.

Longtime fight fans who really want to get their juggle on will find that, with the right circumstances, you can get some pretty substantial hits going, the highest I saw being 16. You’ll have the opportunity to try on your big boy pants at any time, because SNK Heroines has a dynamic difficulty slider, which basically equates into frequency that the opponent is conscious during the fight. Going from one to five, the game puts you at the sweet spot of 3 out the gate to make sure there’s a bit of challenge going on throughout. If you drop it down to one, it’s like doing a two player brawl, but the other guy put down his controller and went to get a snack from the fridge and you’re a bastard. Putting it at five means the AI is hyper aware, and ready to land a sick set of moves at any time, not to mention more prone to make risky but rewarding manoeuvers (such as landing a Dream Finish in the middle of the fight just to really cripple your HP and your dignity). It’s honestly as simple as pausing and changing the number, so don’t fret if you find yourself in over your head: just change it up. 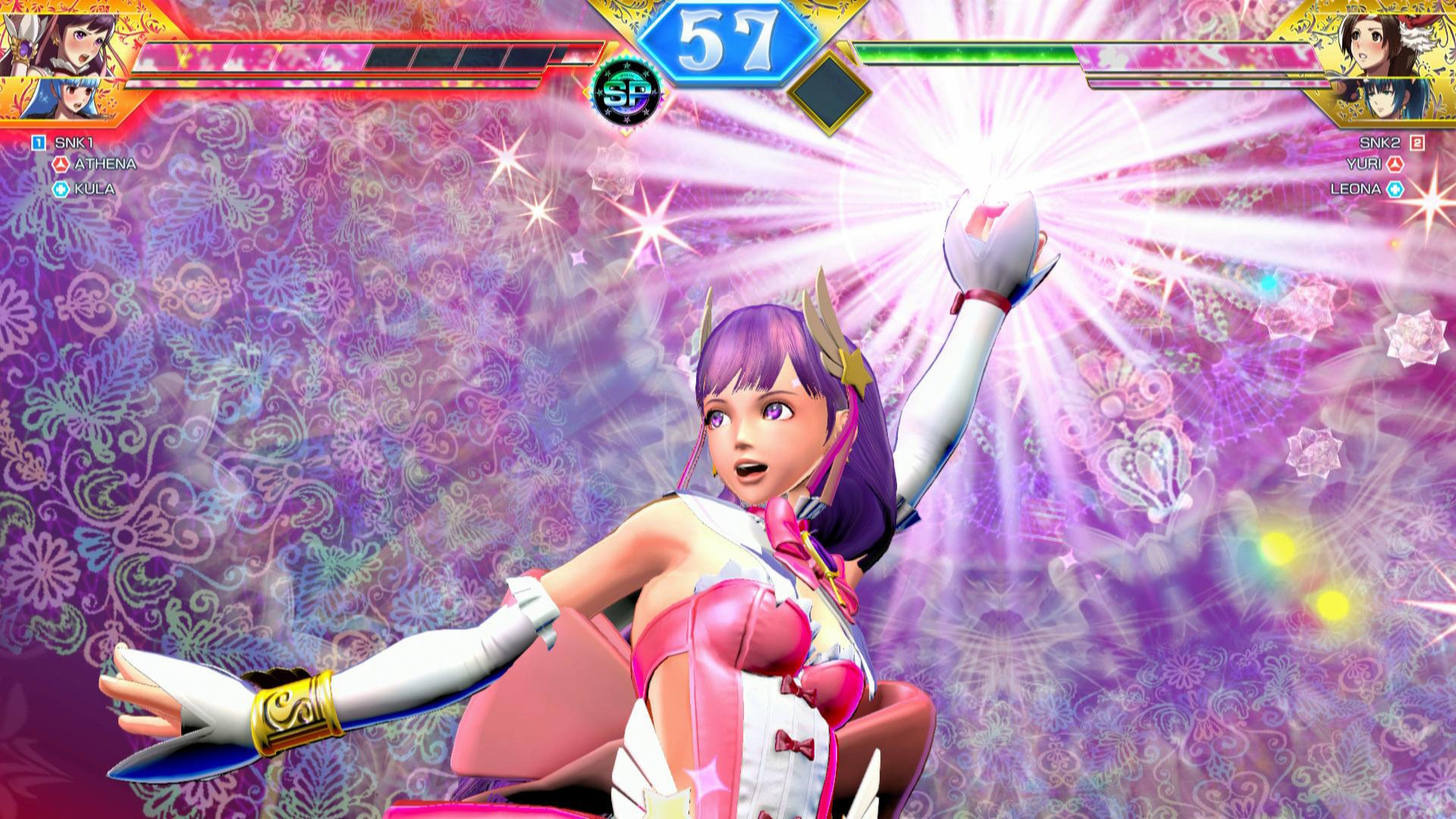 One of the big reasons that the game is so massive is the sheer amount of time that went into the extras of it all. Literally every combination of characters you could think of unlocks a new movie to be watched in the gallery, as well as every song, sound clip and cut scene you encounter. NIS America wanted to make sure the fans got a chance to relive and rewatch and re-listen every single second of the game outside of actually playing it again. The cinematic textures are, straight up, not my favorite. Each girl has a strange tinge to their skin and their features that feels like we’re bordering on some uncanny valley lines in terms of proportions and exhibition. The costumes are, unabashedly, connected to some kind of fetishism, to the point where the antagonist who arranged this whole thing actually yells Fetishism Explosion during one of the cutscenes. There are unlockable extra costumes, as well as extra accessories, so that you can customize your favorite fighters to be more to your…style. I personally enjoyed making Terry look like a Dallas Cowboys Cheerleader, or replacing his(?) iconic hat with a ringing black telephone. You can have a bit of fun here as long as you enjoy the fan service.

And that shouldn’t be a surprise to anyone. If you’re one of the loyalist holdouts from the old Tekken generation and you’re looking for the next thing to keep you technically limber until Smash arrives later this year, this doesn’t seem like the best choice. SNK fighting games are, by and large, phenomenal, and SNK Heroines: Tag Team Frenzy delivers some pretty powerful blows with a few fun surprises in terms of gameplay (using items to create good hit combos is actually quite strategic). In terms of fighting games, it’s damn solid. In terms of fan service, it’s an 11/10. But there are elements of it that are distracting and may not make it family friendly. Mai is dressed in a cow bikini complete with horns and a bell, and cleavage is all over the place in most fights. If you didn’t grow up with a Puritanical message about the obscenity of the human body being drilled into you, you might still have a great time in mixed company. But if you’re a bit hesitant to execute Luong’s crescent kick Dream Finish in her schoolgirl uniform, maybe hold off playing this one at family gatherings.

SNK Heroines may not be the fighting game for everyone, but the beautiful cast and vast customization will delight fans the world over.