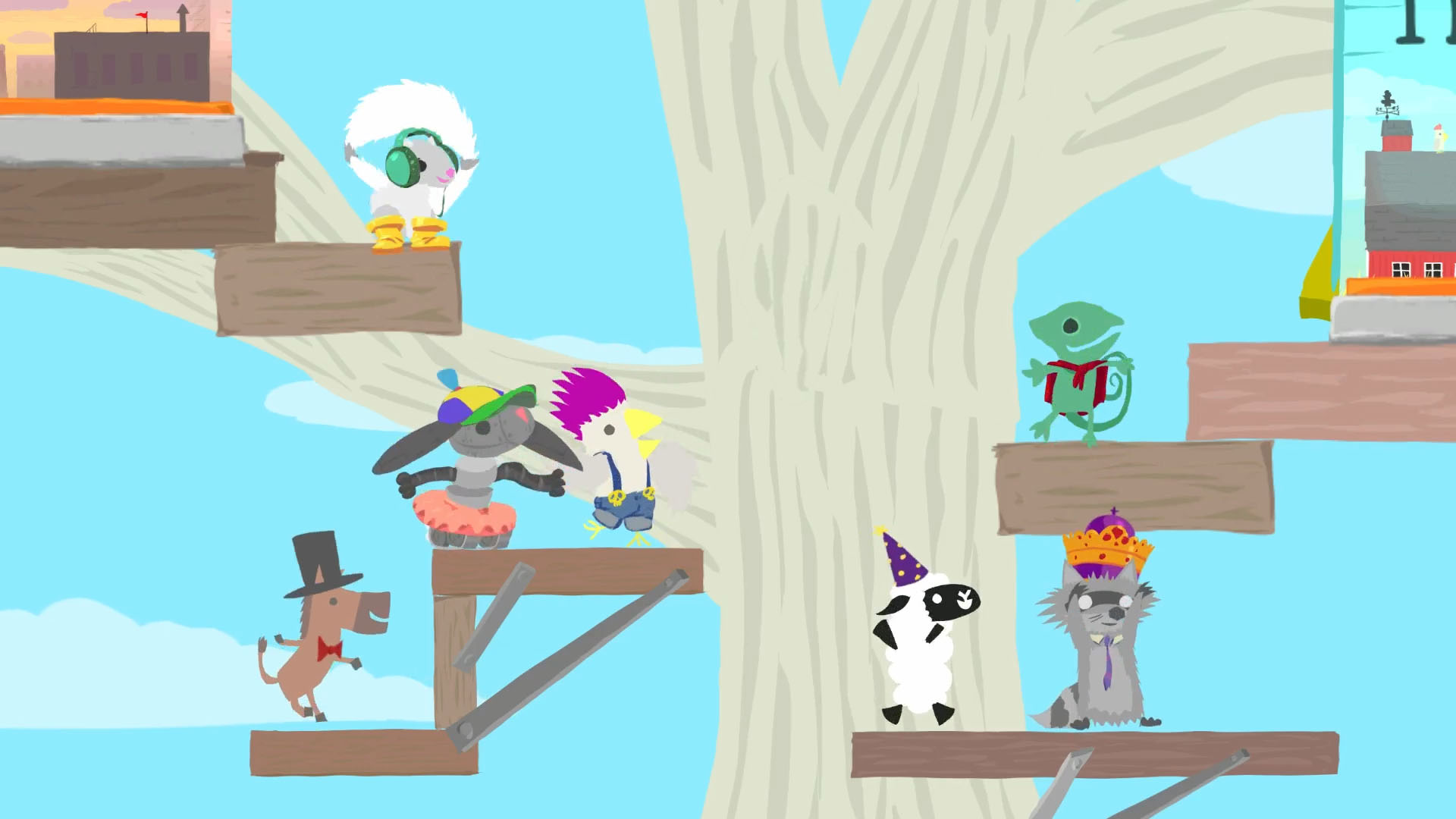 Quick, what’s more enjoyable than playing a game with your friends? If you answered “anything productive that furthers your life in a positive way,” get the hell out of here, you’re not my mother/guidance counselor/police officer at my parole hearing. No, the best kind of fun is when you get to also screw with your friends! After all, if your friendship can’t handle a little intentional mayhem, then you won’t be able to weather the coming storm when you both show up wearing the same dress to that Tim Horton’s opening next month. Clever Endeavour Games (which is just a fantastic name) understands this, and it’s the key to success in their multiplayer madcap Ultimate Chicken Horse.

There isn’t a story to speak of for Ultimate Chicken Horse. A horse, a chicken, a sheep and a raccoon (and, eventually, other animals!) all hang out together, and they like to race for the flag together. Each one of the stages presents a clear goal of “get to the flag.” At the beginning of each attempt, however, there is a twist. A box or two of screen props is presented, and players will have just a few seconds to grab an item to place somewhere on the game landscape. Some are innocent enough: a wooden plank to walk across, a moving platform that can bridge a large gap. But there’s plenty of insanity mixed in as well, from a massive paper airplane throwing machine to fireball launchers and, my personal favorite, incredibly localized black holes. Occasionally the box will give you bombs that can be used to destroy the other players props, or coins that count for extra victory points if you collect them and get to the finish. Oh, by the way: if everyone wins, no one wins. So if you all work together to make some easy, happy path to victory, there’s no points awarded. If you wanna come out on top, you need to challenge yourself and the others to artfully, gracefully dodge your way to the finish. May the best animal win.

Due to the simplistic nature of Ultimate Chicken Horse, the controls and the concept port incredibly well to the Nintendo Switch. The only buttons you need to worry about are run and jump, and the fact that you can sort of do a wall jump as long as the conditions are right. Half a JoyCon is more than enough to successfully and comfortably control your animal, and, hint, none of them are unbalanced enough to make people scramble for one beast or another. Additionally, the animals have no collision with each other, so you can’t interfere with their success in the traditional way (though you have the potential to block their view a little in order to make a jump go awry). The floating cursor that appears for character selection and item placement works well enough with joystick control, and, overall, the game runs predictably well in the Switch’s environment. The only technical thing I noticed is that there were a couple of times where the game couldn’t/wouldn’t load up the homemade levels from the online community, but we’ll get to that in a moment. 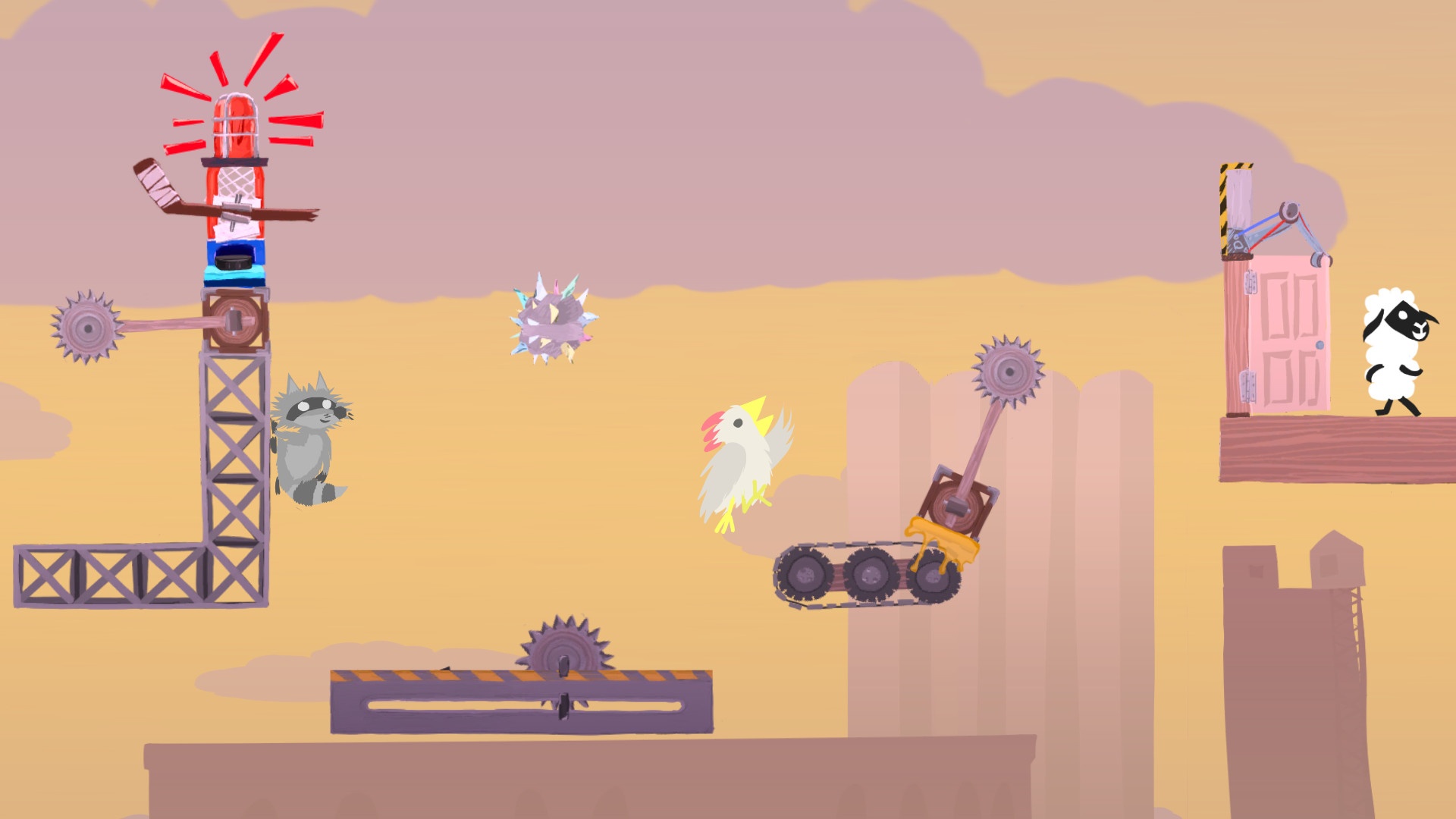 Much like a demented version of Mario Maker, Ultimate Chicken Horse’s strength comes from the creativity and ideology of the players. It’s not enough to make the course hard or impossible: you basically spend each round weighing whether you’re a better player than your friends/family in this scenario. You have the choice to try and sabotage whatever your fellow contestants are cooking up (a well placed crate can stop that auto crossbow from ruining your life) or to make your own creations more difficult. Adding ice to the stairs might make the lane impassable, but are you confident enough to take them at a run from the nearest bale of hay in order to be the speedy victor of it all?  With the choice of either online play or couch co-op, you’ll run your own risk of players attempting to swat the controller out of your hand when they realize you can vault their swinging chain of doom with the right trash can placement (I think it’s a trash can, apologies if it’s not).

Naturally, there’s the party mode that we all know and love to allow you to unlock new levels and make a fool out of your cohorts, but there’s plenty of other options in Ultimate Chicken Horse. The Challenge mode allows you to compete on a global scale to see who is the best animal in the whole damn world, but be warned: this game is totally cross play compatible with the PC crowd, so they’ve already got quite the head start. Creative Mode is more focused on what you can make and less on where you can go, so it’s definitely for the builders out there. There’s a Freeplay mode for when you just want to see what kind of nonsense combinations you can create with different items on the gameboard, and basically are more interested in the creation than the execution. Those localized and online modes alone are enough for new players to find themselves with a ton to do, but Clever Endeavour has gone above and beyond to make sure that the Switch people don’t feel left out of what the game has in terms of potential.

When you travel to the bottom of the screen, this is where you can find the homemade levels that have been cooked up by other players. Much like Animal Super Squad, Poly Bridge and damn near every other creative game, it’s fantastic to see what people can do in their free times in terms of creation and execution. PC players have had a large headstart in this department, so newcomers to the Switch already have hundreds, if not thousands, of custom created stages ready to go and be played in a number of ways. You have group adventures to navigate singular pathways, levels that encourage creative thinking to get to the end, and, naturally, the ultra punishing levels that require split second reflexes and an intimate knowledge of what the level looks like beforehand in order to accomplish things. The last category isn’t my favorite, but I know plenty of people who really live for those kind of damages, so go nuts, people. 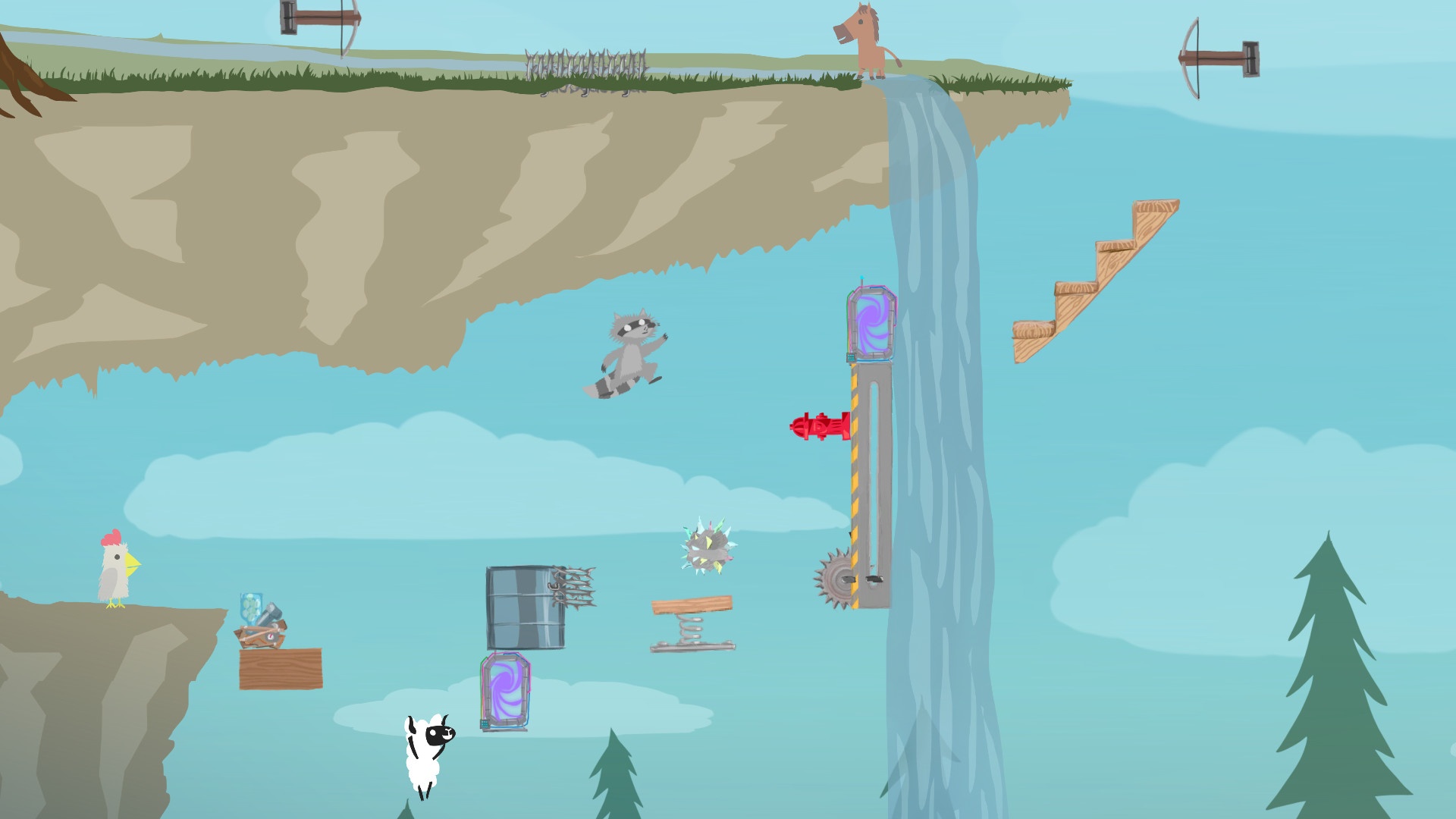 What makes Ultimate Chicken Horse really work is the gameplay elements mixed in with the presentation. The character avatars are all goofy, inoffensive and downright silly representations of animals that would never naturally hang out with each other, much less attack each other. You have a ton of ACME branded goods and traps to utilize for your victory, and the comically over-the-top styling of it makes it hard to get angry or genuinely upset with anyone who is playing to win. Sure, it’s depressing when you misstep, get hit by a flying hockey puck, and then your dead body just sails away on a paper airplane, but think about what I just said and realize the ludicrous nature of it all. You have to play to win with Ultimate Chicken Horse, or maybe make alliances with one other person (if you can do a four person game), but there should only be one winner, so why not make it feel as non-competitive as possible? Being able to relax and laugh at my own mistakes and the diabolical but ultimately harmless plotting of my favorite people means having fun in a big way.

There’s probably a good group of people who play to win, take Ultimate Chicken Horse super seriously, and might bemoan the fact that the load time is a little slow or something is missing, but I didn’t notice any problems or slights with the game. The biggest problem is that the solo player aspect of the game is woefully low, and half the fun of completing the challenges and the custom levels is bringing along someone else to try it with you. This was a massive success on the PC market, and I imagine that there will be a boom of players eager to drop a few bucks and have a brand new way to screw with their friends anywhere. Not sure if you need the looming Nintendo Online Service to enjoy this one with friends far away, but, as they say, you can’t make an omelette without obliterating a chicken.

Quite possibly the best game out there to see what happens when physics, fire and crumbling foundations all meet up for one unlucky sheep at the same time.