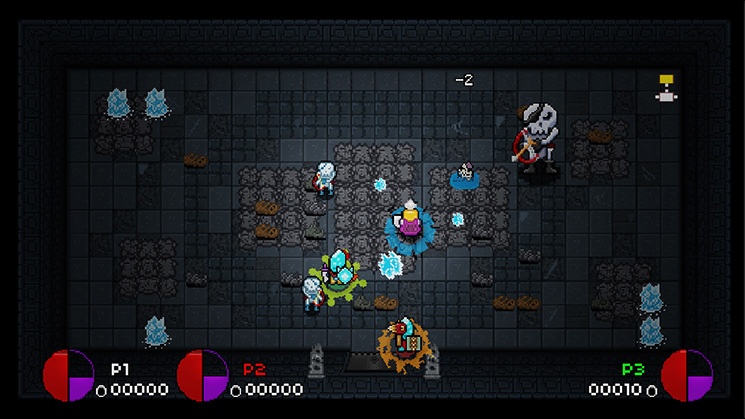 I’ve had a soft spot in my heart for Bit Dungeon for quite some time now. As someone who really wanted to make iOS and Android gaming a thing that could go toe-to-toe with the bigger and more seasoned platforms, I played many hours of the original Bit Dungeon on my phone, crawling through labyrinths of procedurally generated goodness. I found tons of treasure, got to get my ass handed to me by a slew of monsters, and even made it to the end once. So I was excited to find out that the beefed up version, Bit Dungeon Plus, would finally be getting a Switch release. Thankfully, it’s maintained a lot of the goodness of the original while baking in some important and awesome extras for this console release.

Bit Dungeon Plus, for those unaware, is a retro inspired roguelite dungeon crawler that puts you, the hero, in a randomly setup dungeon that sprawls out in multiple directions, with monsters, traps and treasure between you and the exit to the next floor. The objective is simple: defeat enemies, get keys and get to the next level. It’s hard as hell to do, but that’s a topic we’ll cover in a moment. Like many other roguelites, the idea is that the game will keep you enchanted and wanting to play because every single run is something totally randomized within certain parameters (you won’t get giant flaming skeletal archers in the first room) and you may, in theory, get some really fantastic plays and some that are…less than great. In any case, if you’re familiar with the procedurally generated generation of gaming, then you know what you’re in for.

Bit Dungeon Plus takes a ton, and I mean a ton, of inspiration from the dungeons of the original Legend of Zelda. Everything from the room design to the graphics themselves are nods to the 8-bit generation. Your character can’t exactly run between rooms, and the objective of finding keys which *should* drop every room is imperative. You have three main buttons: hit, block and magic. You start each game with a different type of magic, from immediate proximity stunning spells to revolving, monster-seeking death skulls (I prefer the skulls, myself). The monsters are no slouches themselves, and will come after you in either fast or slow fashion, hurling projectiles that move at different speeds. Most of the initial monsters will have an easy-to-follow pattern where you can get into a good rhythm with blocking, swinging your sword and blocking again. As you move along, however, the monsters up their game, becoming more frenzied and emboldened, and you quickly run into monsters who just charge at your dumb ass and you need to take them down asap while trying to stay alive. It’s fun, in a terrifying sort of pixel way. 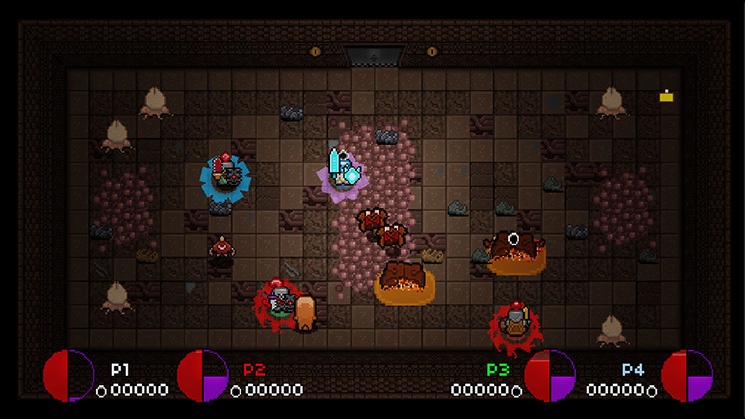 One of the elements that really makes Bit Dungeon Plus stand out is the equipment that you can eventually find. Taking cues from classic Dungeons and Dragons elements (and, more recently, Diablo), you’ll find armor, weapons and helmets that start off fairly tame (a spear, an axe, maybe a strong axe) and then spiral into ballistic insanity (Haunting Helm of Exorcism). It’s the kind of stuff where, if you’re lucky enough, you’ll end up overpowered and hilariously ready for any and all monsters that you come across, including the bosses, which have some serious presence and will mess you up if you’re not ready.

There are a few things that will make the Plus version of the game appealing to those who’ve already spent a ton of time and effort in the original game. First and foremost, multiplayer player mode. Holy crap, is this a game changer. One of the biggest gripes I would have about the original is, if you end up with a bad seed and turn left into a room full of massive creatures right off the bat, there’s no way you can run interference and take them all out in time before you drop. Two players can absolutely get the job done, even if they just have the bare minimum equipment, because the AI will get easily confused about who to target first with their ranged attacks. Four players have a blast just pillaging everything like they were goddamn vikings. This isn’t bad programming or something like that, it’s just an honest-to-goodness reaction someone might have to suddenly dealing with two invaders instead of one. It’s great fun to have a friend along to help plumb the depths of hell, but it does make things awkward when there’s a limited amount of dropped equipment. When you’ve got a Critical Blood Sword and your friend’s still hefting the sword he spawned with, nasty tastes can develop and suddenly he’s not helping get the skeletons off your back. Bastard.

There’s also Babel’s Tower, which is like a time attack, slightly varied version of the main game. Far from heading deeper into the depths, you have a limited window to scream through a floor, finding weapons and keys, and trying to get to the red door that marks the entrance to the next level. Pass and get a bit more time for the next floor, and continue till you end up beating it (good luck) or running out of time. This is definitely an exciting situation for fans of the core game, but it might be vastly frustrating for newcomers, so please sink a little time into the main game before jumping into this. Since a lot of the core Bit Dungeon Plus gives players leeway to work out timed strategy, suddenly needing to do everything under the gun is less than optimum when you’re still getting your feet wet. 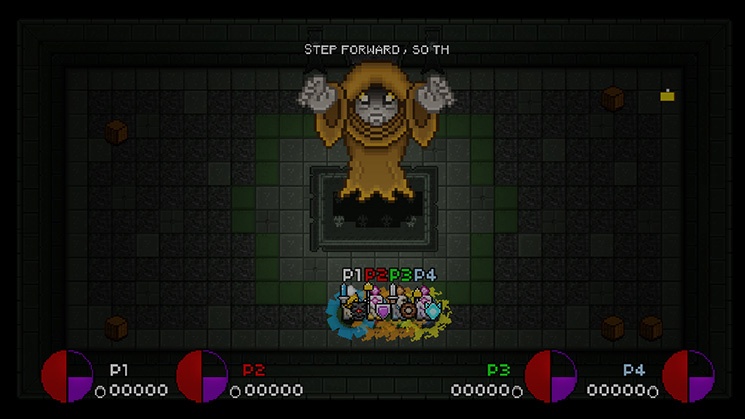 Finally, Boss Mode. Remember those bosses that I mentioned? How about only fighting bosses for a bit? With up to four players, you get a chance to see how you and your friends can handle the bosses of Bit Dungeon Plus in order of appearance, seeing how well you stack up and can do without getting a ton of gear dropped in between. To be fair, you will see some equipment spawn upon the conclusion of each fight, but it’s limited, and, again, you’ll need to contest with your friends to enjoy it. Fun fact for players looking to waste time: you can assign the game to four players, but the Switch won’t check for four controllers. So if you want to generate three scarecrows to lure the boss while you go to town on it, be my guest. It’s not the best strategy, but it’s certainly something.

Finish it all off with a pretty spot-on chiptune soundtrack, and Bit Dungeon Plus is a phenomenal and engaging roguelite that brings a lot to the table, even if it’s not necessarily proprietary to the Nintendo Switch. But a good game that I know other console players are enjoying is better than a tepid exclusive any day of the week. If you’re itching to get some great hack n slash action in with a whole twist of generation and randomization, then Bit Dungeon Plus is a highly polished title that’s more than worth your money.