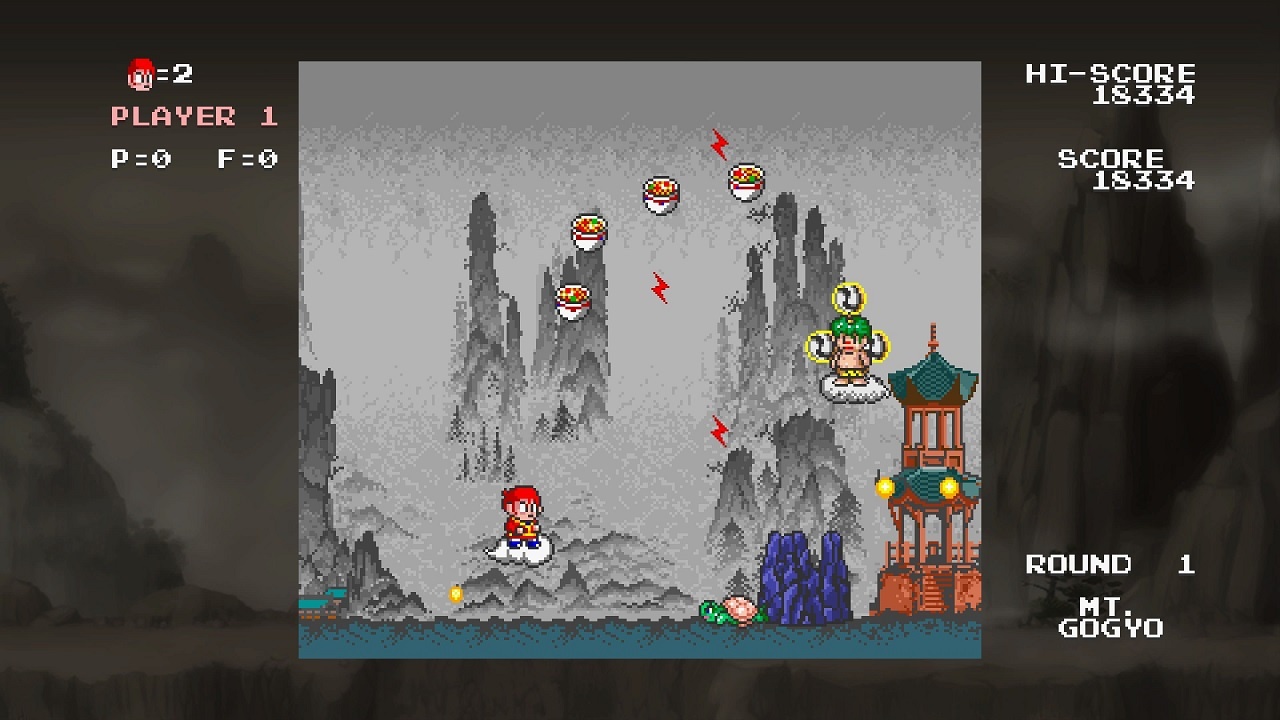 There are a variety of bars by which to measure the difficulty of a game. For some, like the Dark Souls series, it’s a matter of anticipating and memorizing a hundred different attack patterns, random attacks and the general unfair tone of the game that then, in turn, makes it so satisfying to get it right. For others, like Enter the Gungeon or Dead Cells, it’s being able to adapt and survive through sheer skill and a good amount of luck, as you never know what’s to happen next. And, for the Touhou series, it’s being completely insane and weaving through curtains of bullets like a merry little kitten who’s hopped up on speed. Yet there is a fourth, great category of difficulty: hard by design limitations. For as long as we’ve had the ability to make games, we’ve played some real stressers, and Retroism, in conjunction with Starfish-SD, has brought a new take on an old classic to the Switch. Welcome to Monkey King: Master of the Clouds.

Monkey King is based on an old MSX game that also saw a Japan-only NES release, called Cloud Master, or Chuka Taisen. The game is a digital interpretation of the story of Michael Chang, the Monkey King, who decides to journey across China and fight a bunch of Chinese deities, because these were simpler times and that’s just what simian royalty used to do. Floating on a cloud and shooting a bunch of bullets, Michael needs to destroy countless flying enemies, from harpies to dragons to, apparently, angry bowls of noodles, and collect the power ups they drop to fully charge himself in order to take down the big bosses at the end of the stage. After all, he is the Monkey King, but he is far from immortal.

One of the first things you might notice is that Monkey King: Master of the Clouds has had some obvious tune ups under the hood to help better bring this game to the 21st century (as the original was released in 1988). Though the graphics are mostly unchanged, they have been given a nice color balance and polish to help them come through clearer on the modern televisions and the Switch’s own portable display. Now, this doesn’t mean they’re going to shimmer like other updated pixel titles: it’s still distinctly retro, and looks and feels EXACTLY like a game from the NES generation would. A lot of effort is put into making Michael look good, the enemies look alright, the bosses to look properly large (but sometimes silly), and the backgrounds to look enough like China for you not to question it but also not to look too closely. It’s a great throwback display, showing people what games used to look like and properly stoking the nostalgia fire for those who played it and those who just remember the Nintendo Entertainment System. 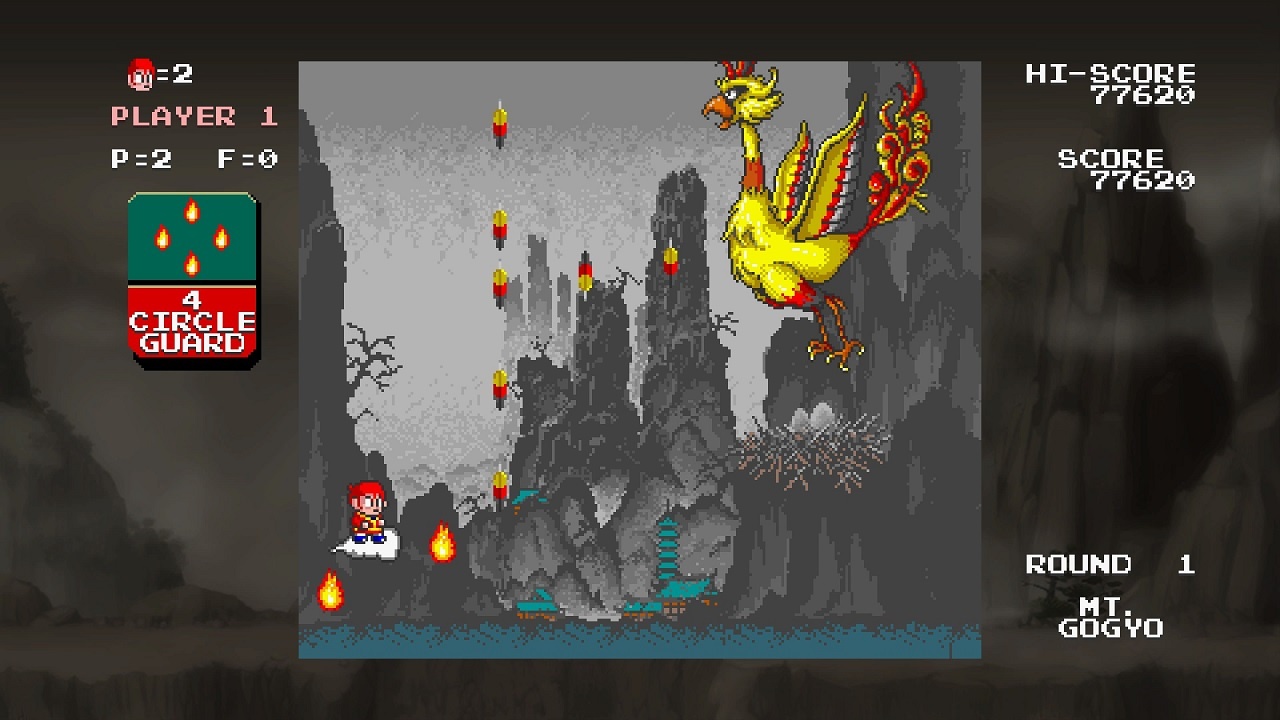 But there are some technical updates to the game as well. Two player mode has been introduced, which is a HUGE help in getting through the game (more on that in a moment). By having a second local player, you’re able to better tackle the waves of enemies and deal with the bosses in record time. Now, Monkey King: Master of the Clouds isn’t a terrifically long game to begin with, but having a second player is more about balancing the amount of stuff you have to deal with instead of finishing faster. Additionally, there’s an online ranking board that’s been added for both single and dual player modes, allowing folks from around the globe to see who’s the main monkey in all this jungle. As great as it is, I will say that it does the excessively annoying “check for internet upon boot” tick, which means the game throws up a damn error message if you happen to try to start-up the game or continue it while on the go. I get it: you want to keep track of your online scores so you can brag to people. But harassing them about internet every single time it loads is a surefire way for me to get deeply embittered towards the title fast. Can’t we please make it just check when you go to the Ranking screen?

Anyways, there’s no adjustable difficulty for Monkey King. You can toggle how many lives you have in reserve, and that’s it. Taking a single hit from anything – bullets, collision, getting stuck behind a mountain and getting scrolled off the screen – leads to instant death. And a single death in Monkey King can mean a lot of future deaths, because this is a game that relies on the player being on point with their dodging and shooting. You can, eventually, power up your weapon enough to turn on autofire, but it takes a couple of stages in order to get that on. Before that, you need to mash the fire button repetitively to stay alive. As you shoot down more enemies, your shots evolve: soon you get a twin shot, then a twin parallel shot, things catch fire, you get a bigger range, hell, it even becomes a wave pattern after a time. But the second you take that hit…it’s all gone. 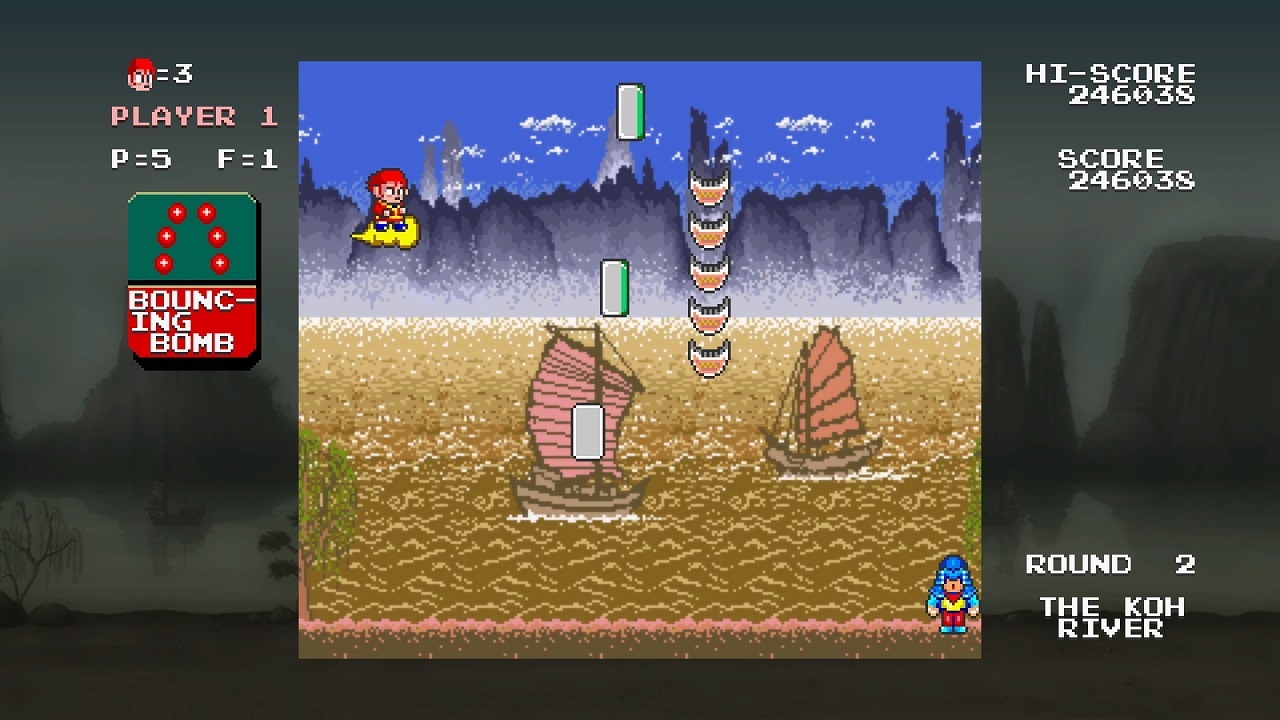 Moreover, you gotta be a strong enough player to stand on your own just to unlock the “extra” shot. You’ll be given a lucky chance to pick up an extra shot charge long before you can even use it, and the only way to get the extra shot is to defeat a mini boss that crops up a couple of times per level. This dude takes a lot of hits, flits around the screen, and, oh yea, the other mobs still come out during this assault. If you can beat him, you have access to several choices of extra shot to make you more powerful, and these are relatively dope and versatile to your play style. I do enjoy the massive bombs that can be dropped on the shooting mobs below (how I hate the turtles!) but I ultimately enjoyed the eight point fire wheel the most, as it kept swarms off my tail (but it did little to stop their bullets).

Monkey King: Master of the Clouds doesn’t have a ton of bullets coming at you, nor laser beam unfairness with monster accuracy, but it does play and slow down your movements and responses to what would have been standardized at the time. You realize you can only float or descent so fast, so you actually need to figure out where is the safest place to reposition from the second you’re done dodging. You can’t fully guess where the next bullets will be, but you can decide where you’ll have the most room to breathe for when it finally happens. The overall result is that the game never reaches a point of satisfaction or enjoyment for me. Even when I’m fully powered up, I’m hyper aware that a single shot will end my run, and even nine lives in reserve does little to assuage my worry. I spent a fantastic amount of time looking literally everywhere on the screen at once to figure out what’ll be my downfall, never being able to appreciate my own shots. Hell, the most relaxing part of each stage is the boss at the end, simply because it’s only one beast. It’s not easy, but at least it’s only one thing to focus on.

If you’re someone who deeply enjoys this kind of trial by fire and 100% accurate homage to the games of yesteryear, absolutely pick up Monkey King: Master of the Cloud. It’s fearsome, it’s frantic, and it’s a badge of honor to have a high score up above the others. But if you’re more of a novice for shooters, or just don’t have the patience for utterly forgiving games, you might wanna let this monkey float on by.

Monkey King captures the real meaning of retro shooters, including all the difficulties and caveats that came therein.