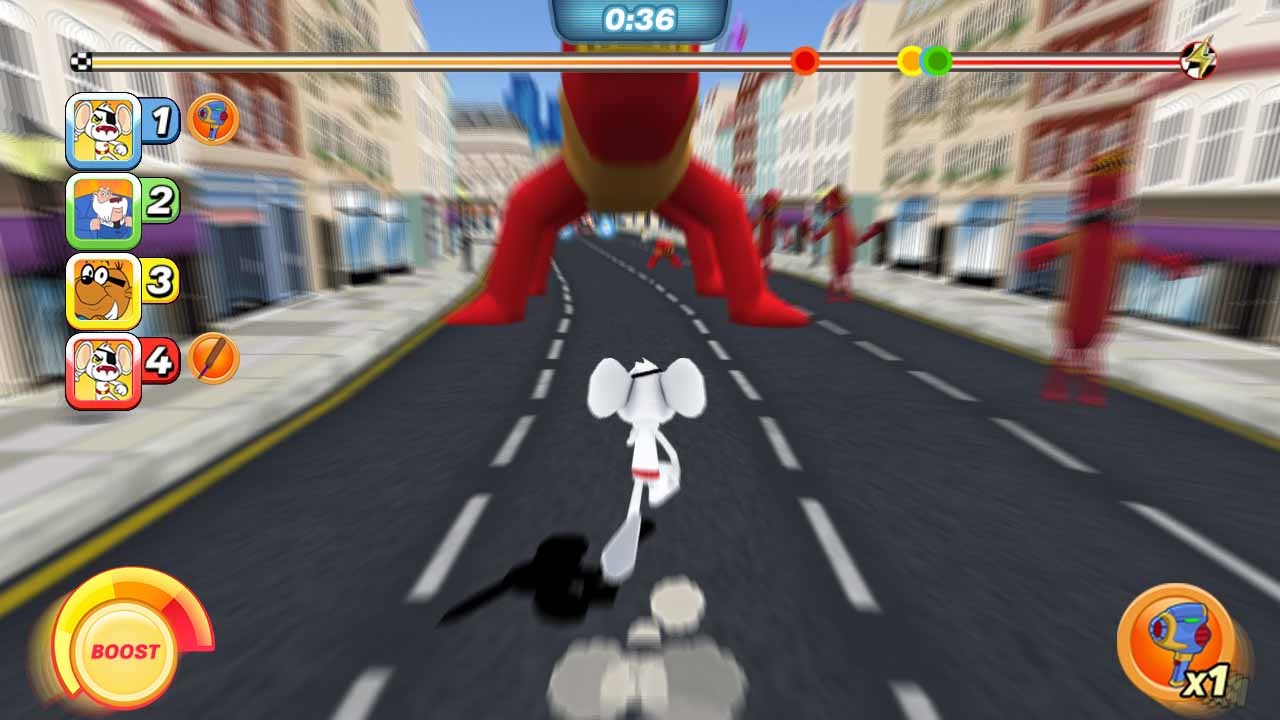 He’s the best. He’s fantastic and wherever there is danger, he’ll be there. Of course, I’m talking about the iconic secret agent, Danger Mouse; well, actually I was just quoting the lyrics from his cartoon theme tune and as a child who grew up in the eighties, he was pretty iconic to me back then. He’s since had a revamp, with a new upgraded television series and now, is making an appearance in a new video game in the form of 9th Impact and Freemantle Media’s Danger Mouse: The Danger Games, out now for the Nintendo Switch and Android devices.

This wacky racer sees you competing in a reality TV show called The Danger Games. Conceived by J. J. Quark, a small alien with big ambitions of taking over the Earth, you compete in a series of races against a line-up of familiar characters from the hit BBC cartoon. Obviously, there’s Danger Mouse, as well as his sidekick, Penfold, but there’s also other cast members in the form of Colonel K, Jeopardy Mouse, Count Duckula and Baron Von Greenback, to name but a few. The aim of the game is to race through the streets of London, against three other competitors and on a variety of tracks, as you run, jump, slide and dash your way through a series of obstacles in order to finish the race in first place.

Primarily aimed at a younger audience, the game begins with you having to choose a contestant name for your very own profile. You get to pick from a random variety of colourful aliases, such as Goldie Fart Tree and Poppy Motor Pants; a typically toilet style of humour that is sure to appeal to kids. After a brief tutorial, you are then presented to a range of options within the game’s home screen. These range from Cards, Play, Secret Agent and a shop, with a series of sub-menus that include the Options, Achievements, Online Leaderboards and Daily Missions. A word of warning though, as the shop contains some micro-transactions, so if your children are playing the game, make sure your parental controls are set up appropriately, so as to avoid any unnecessary purchases. 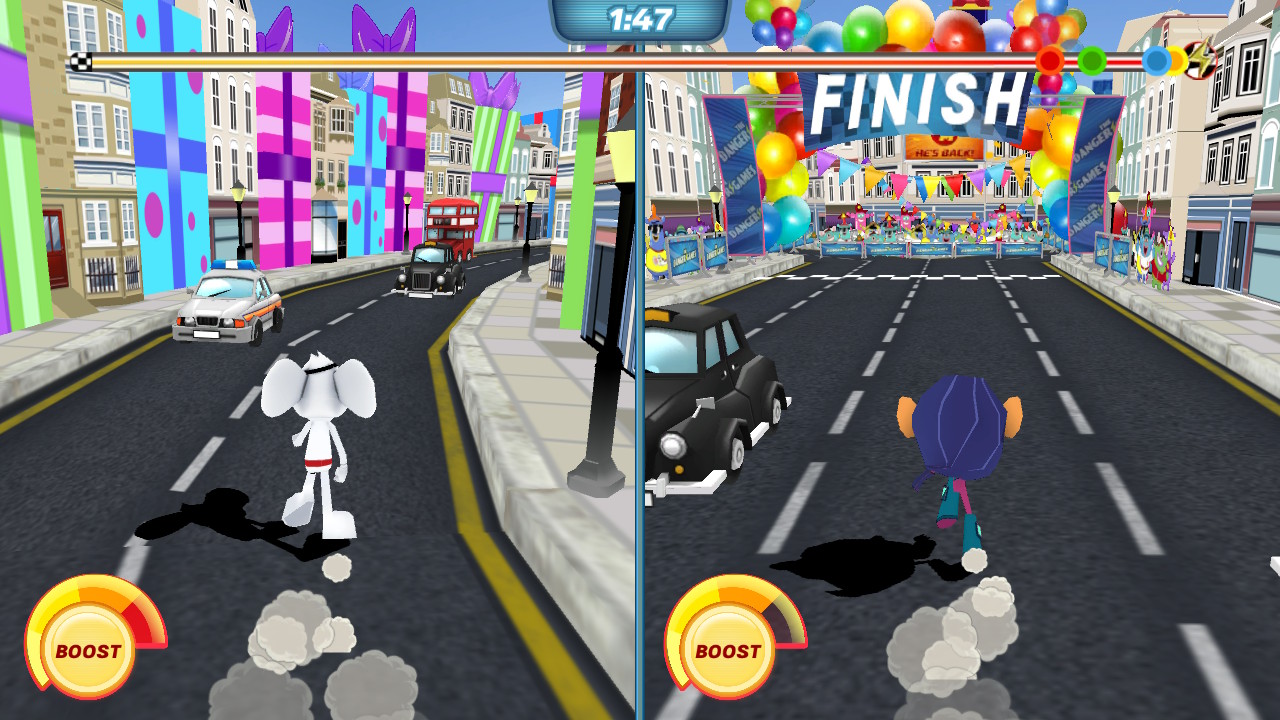 Partaking in races, awards you with a series of cards. There are thirty-five different varieties to collect, as well as three stages of rarities. These cards contain fourteen different characters that you can use within races, as well as a series of twenty-one gadgets that you can call upon to help you; these can range from things like hoverboards to speed you up, bubble wrap to protect you and rocket boots to propel you above the obstacles that stand in your way. By gaining duplicate cards, you can upgrade existing ones, giving them a boost to their stats. Before each race, you can select from one character, should you own them and three gadgets to take into the race with you.

Each of the race tracks are relatively unique, mainly taking place around the streets of London. With four competitors, you run along a series of lanes, switching between them as you avoid a series of obstacles that litter the course. If you’re not jumping over red double-decker buses, then your sliding under barricades before taking on the roar of the killer hotdogs or chipping away at giant blocks á la Minecraft style. There really are a lot of obstacles that stand in the way of you and the finish line and, along with the competing against three other runners, really does produce a fun affair in its core gameplay values. Depending on how you finish, you then gain awards such as XP boosts, crum pounds, which acts as the in-game currency and extra cards to add to your collection.

This enticing reward package promotes a one-more-go mentality and literally keeps you playing. The control scheme is relatively simple, although the hectic demands from each of the races do require a need to memory-map each of the buttons and their functions. These range from side-stepping left and right with the left thumb-stick, jumping with A and sliding with B, as well as boosting with Y and using items with X. Its a simple scheme, yet is also one that can be fun as you jump instead of meaning to slide and vice versa; especially when playing with friends or family in the game’s split-screen capability. 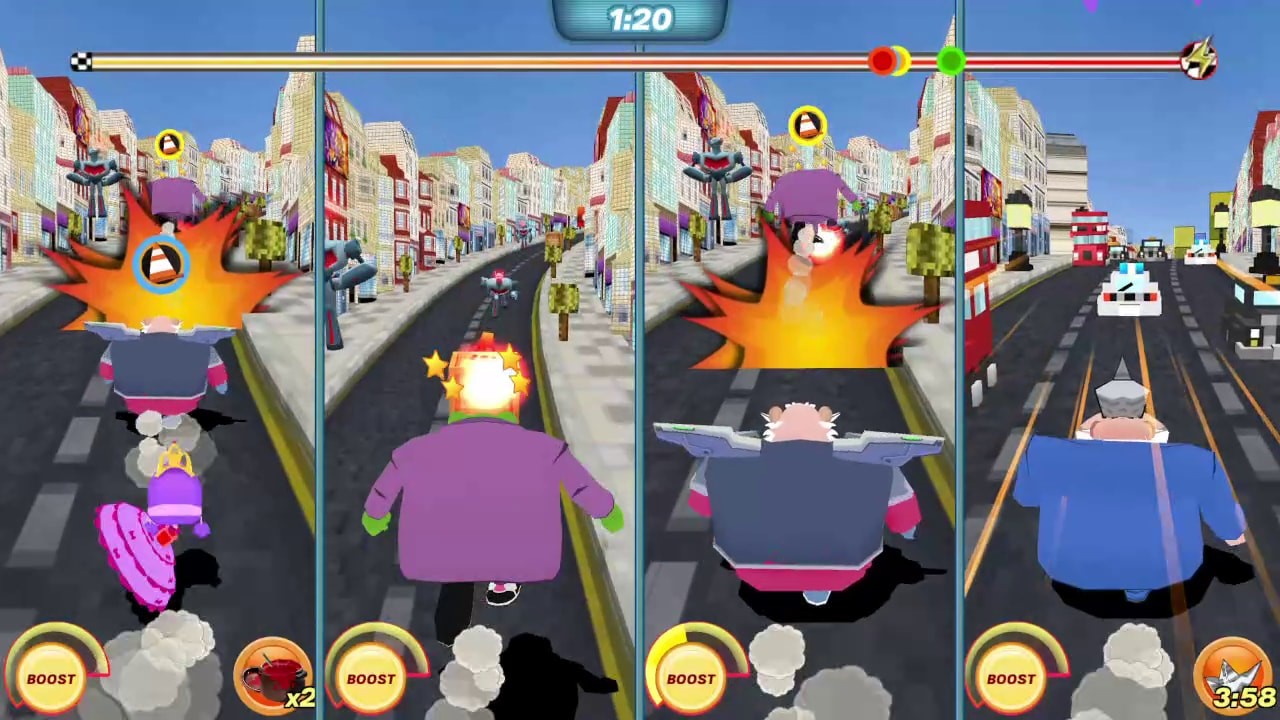 Originally released on the Android platform, this game contains a cross-play mechanic; allowing you to play online against other Switch and android users. In the Secret Agent element of the game, you can create your own club, allowing you to add friends from both platforms to work together in boosting your club’s reputation, as well as being able to swap cards with fellow collectors for ones that you may not have acquired yet. There’s a definite social feel to the proceedings here, with the ability to interact with players; something else that parents should be aware of. By fulfilling daily missions and collecting achievements, you can unlock card packs, as well as gain currencies in crum pounds and apple pies, another form of in-game monetary values.

With these currencies, you can purchase further cards from the in-game store. As well as varying packs, you can also buy the card-of-the-day to add to your collection. As mentioned previously, these forms of currency can also be purchased through the use of micro-transactions with real-world money. However, it’s not a given that you need to purchase these micro-transactions, as repeated play offers enough rewards of in-game currencies to purchase whatever extras you may want to buy. As far as its presentation values in audio and graphical qualities go, there’s nothing here that is particularly outstanding, although it is all perfectly adequate; give or take a couple of annoying sound repetitions and some animation glitches that don’t really deter from the fun that can be had with this title. Performance-wise though, this is a game that runs fluidly, both in control implementation and racing mechanics.

Overall, Danger Mouse: The Danger Games presents a fun and quirky experience. Although primarily aimed at children, I myself, as a mature adult, have had a whale of a time with this game and will continue to do so. A wealth of options and game-styles, including the ability to play split-screen, both on and offline and its cross-play mechanic, means that there is always some way to play. Online play is seamless, with constantly full lobbies to play within too. With its pricing at just under a fiver, this title represents superb value for money, offering an addictive quality in its card collecting and daily goals in completing missions and gaining achievements. Although micro-transactions are present, they’re not necessary, but please do watch whoever is playing the game, as it is far too easy for a child to make a purchase if you’re not careful. As it stands, this is a nice distraction for children, as well as big kids like myself; making it a perfect family game, one that can be played via split-screen on the Switch, or from a series of mobile devices. In fact, it’s the best. It’s fantastic and wherever there is danger, I’ll be there.

He’s the best. He’s fantastic and wherever there is danger, he’ll be there.