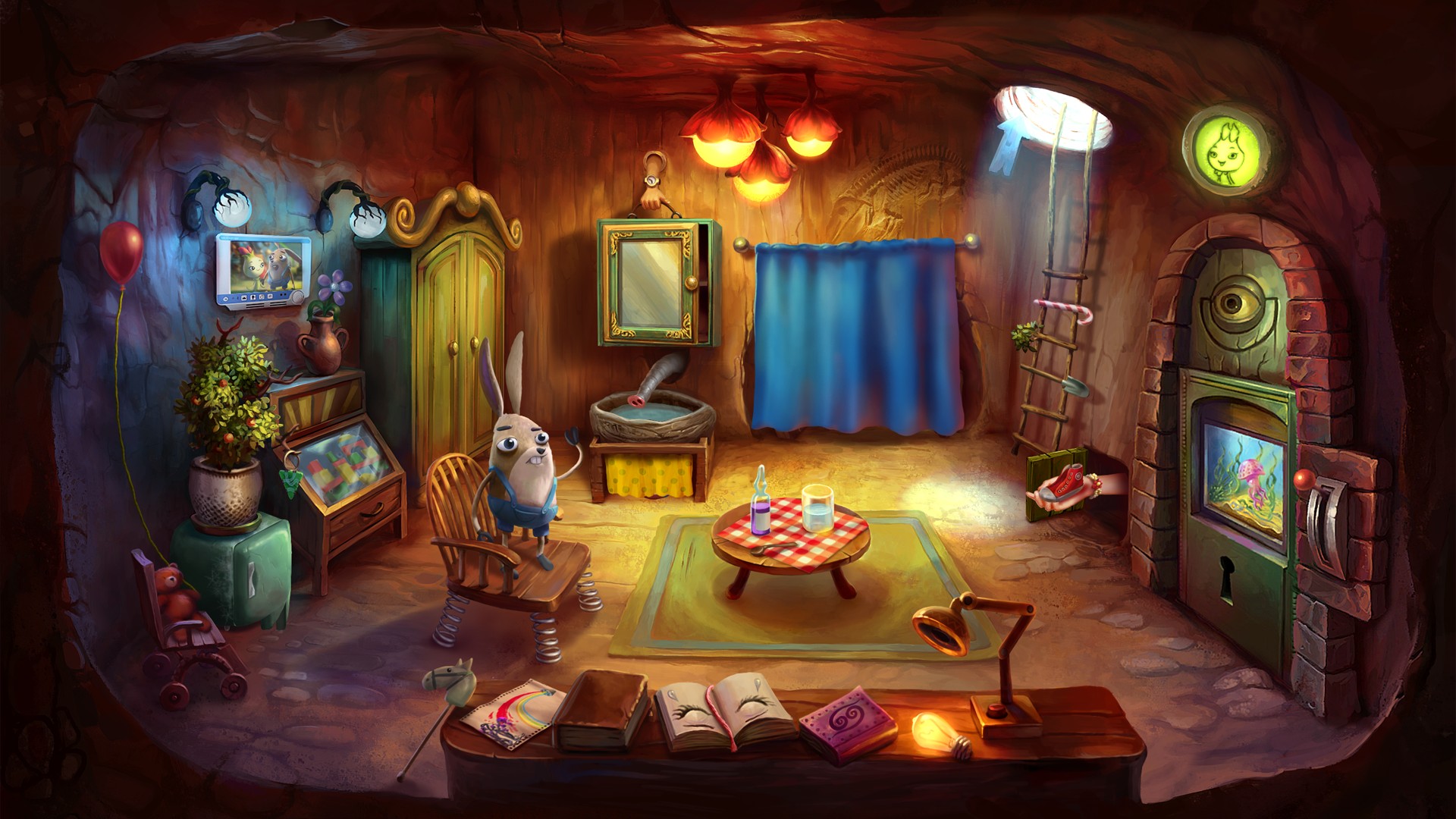 To be perfectly honest, I’ve made a point to stay away from a lot of titles that Artifex Mundi trots out into any of the gaming environments. Though the company themselves seem to be a decent sort of developer and publisher, there’s something about Hidden Object Games (or HOGs) that has inherently turned me off. Probably because I dealt plenty with the Eye Spy type of titles from back in my college days (I was bored, don’t judge me) and they just seemed to be aimless, trivial time wasters of the highest accord. Yet the company has been steadily publishing a series of games, at a profit, for years, so there has to be something to the whole formula. And when My Brother Rabbit was slid cautiously across my desk, I figured I should let my guard down and finally see what all the fuss is about. And, truth be told, I’m rather glad I did. Though it may not totally change my take on the games, it certainly made me appreciate what style and forethought they bring to the genre, even if it’s a bit different than most.

My Brother Rabbit is the wordless tale of a small family that has a daughter who becomes suddenly, painfully ill. The little girl is terrified as to what could be wrong, and there’s only one way to comfort her: the stories of her older brother. Thinking fast, the brother begins to spin an elaborate tale to mirror the girl’s own situation, crafting a world where a beautiful flower is suddenly stricken by a purple plague that falls from the sky. The only one around to help her is a faithful, overall-wearing rabbit, who happens to be the mirror image of the stuffed animal the little girl carries everywhere with her. Throughout the course of her trip to the hospital, examination and various treatments (successful and otherwise), the brother takes elements from the environment and his own possessions to keep the story going. Teddy bear doctors and friendly robots just make up some of the whimsical cast that want to help the flower feel better, and, as always, they are led and assisted by the unblinking efforts of the loving, if goofy, rabbit. 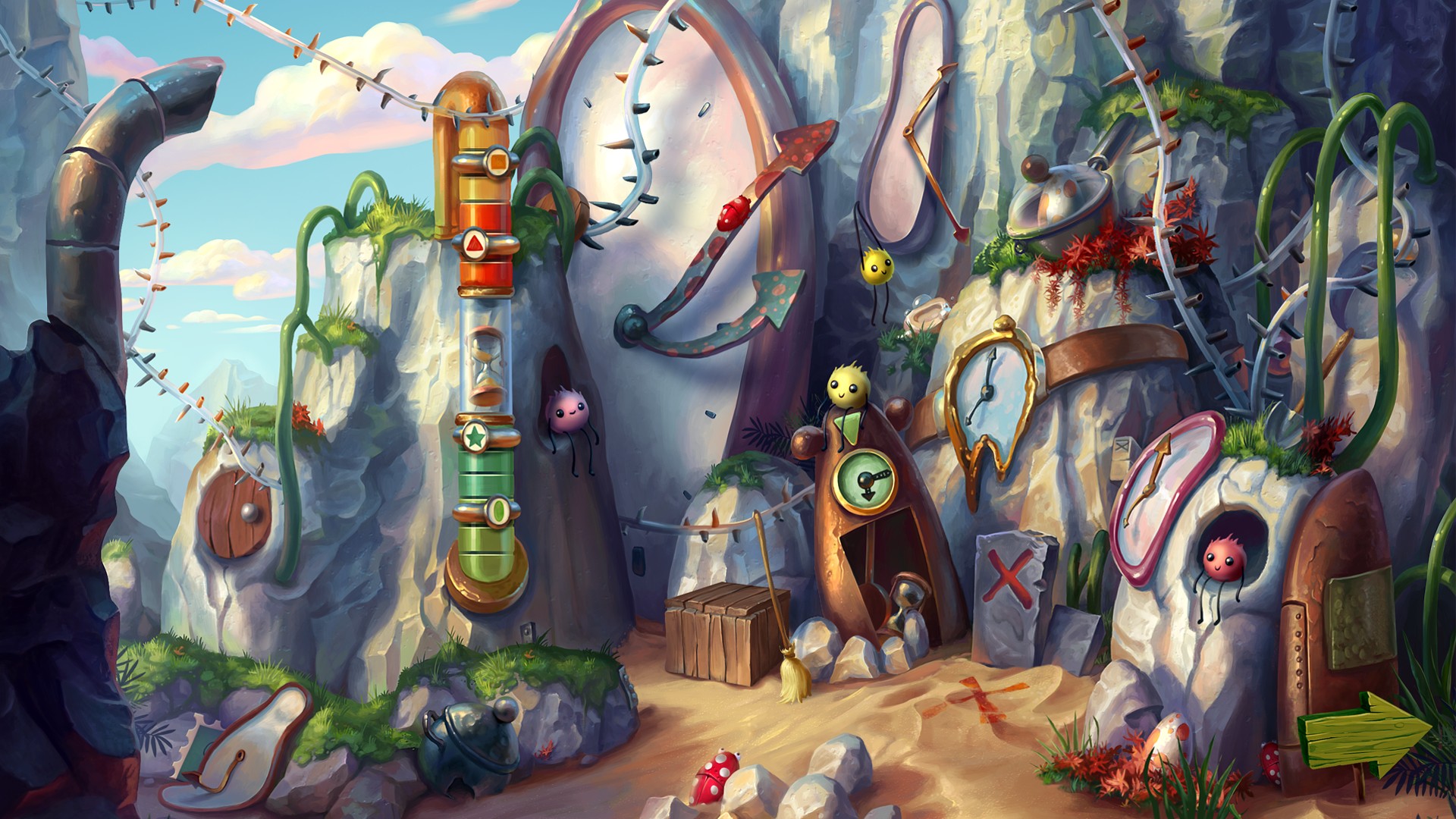 One thing that automatically sets My Brother Rabbit apart from other titles that I’ve seen is the tone and approach to the title. While something like The Forsaken Bride or Nightmares From the Deep wanted to spin this mature, enthralling atmosphere, the softer, kinder tone of My Brother Rabbit puts you into a better mindset for what happens next. The objective is to solve a series of puzzles that appear to allow the flower to move onto the next stage of her treatment and cure, but nothing is ever straightforward. In order to unlock puzzle A, you have to find several pieces of puzzle B, and the last piece of B might be hidden in a location you can only reach by getting six slices of C, and so forth. Some of them are incredibly straightforward: use a sequence of spins to get all the colorful turtles into the right slots to unlock the machine. Others are much more convoluted: a certain door won’t open unless you happen to watch a short film all the way through to see, in the background, what the correct combination looks like.

Over the course of the game (which should take about two hours, start to finish), you’ll find a series of items that are necessary to move on, and, as a result, things become a bit of a fetch quest, but not in the way one would think. For example, you’ll often see items that seem obviously needed in the future, but you can’t think of the how or why just yet. Rather than pick them up, clicking on them will give you a small action animation to say “Yes, smartypants, you will need this, but not yet, so don’t get ahead of yourself.” My Brother Rabbit purposely paces things out and limits actions so that there’s no speedrunning or line jumping to get one place or another without finishing something else. It’s a game of precision and following order, and the reward is, with some good memory, being able to get through the next sequence quickly. So when you see rubber ducks all over the place, by the time the game finally lets you pick them up you know…almost exactly where to go. Aha. You need seven ducks, and you’ve only seen six so far. Tricky girl. Yes, even those with crystal clear recall will still need to hunt around a bit, probably into new regions, in order to finish those puzzles that seemed “so easy.”

My Brother Rabbit is grand in its pacing and approach because it creates the perfect level of engagement and relaxation for moving through the story. Outside of a small bit of text at the beginning to explain about the controls and your methods, there’s no spoken dialogue or written words exchanged between anyone. You see pictograms and visual speech bubbles from whomever (or whatever) to clue you into the next leg of the journey, and then you go from there. The result keeps you in that childlike mindset throughout, making the game pretty damn good for children of all cultures and regions to participate at young ages, and there is no worry of game over or any sort of menacing danger to put the game in a suddenly jarring position. Sure, there’s an inherent sadness that the little girl is sick, but the whimsy that comes from the brother’s creations throughout show a hopeful and positive spin to it all, keeping things from becoming too melancholy. This title lets you play it through in one go, like a feature-length animation, or break it into chunks if you simply need a few minutes of puzzle bending before getting on with your life in another direction. 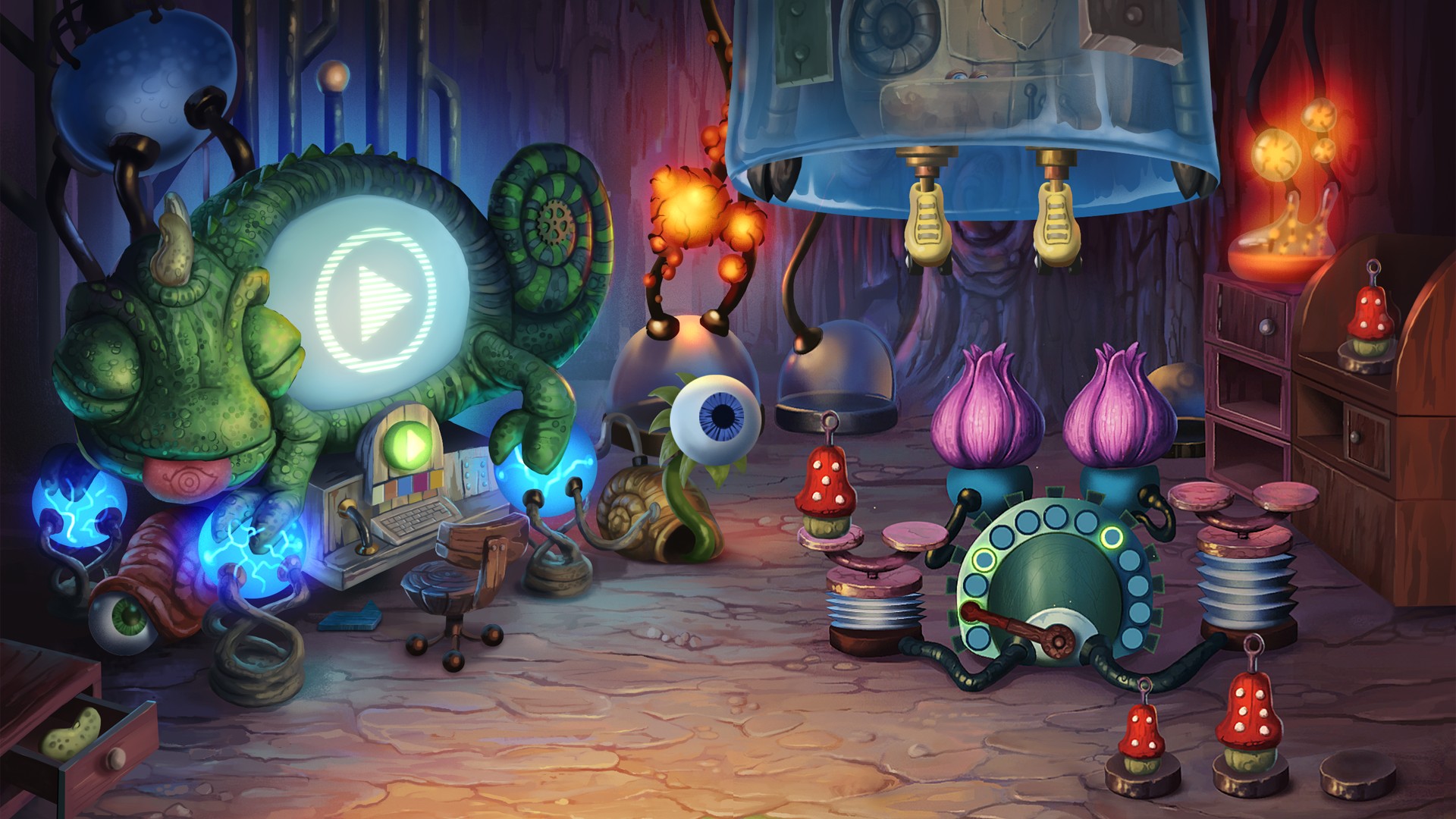 Artistically, My Brother Rabbit is also a huge success in painting the correct atmosphere. I didn’t really enjoy the stop-motion style animation when we went to the “real world” and saw the little girl and her family, but it wasn’t unpleasant and it got the main storyline across well. I adored the styling of the rabbit and his expressive nature, especially his growing concern for the flower, and the way everything from the initial burrough to the massive machination at the end was drawn with the same sort of hodgepodge nature you’d expect a story from a child to have. The brother is throwing things together as fast as he can think of them to keep the flow going and keep his sister distracted, and it shows with errant items, like socks on chimneys or hands that act as hooks, that just pop up everywhere. These oddities are well matched by the beautiful soundtrack, which mostly keeps a sombre tone throughout, but fluctuate depending on puzzles or areas. There’s an early puzzle where you have to build a machine around a butterfly to jettison some rainbows, and the background music gradually grows in strength and complexity as you find and place the different parts.  By the end it’s a powerful cacophony, and you know that the machine is finally up and running. Well done.

The only downside to My Brother Rabbit is that it doesn’t have any real initial replay value. Yet I don’t think that can totally be held against it for what it’s trying to do. By the time you finish the game, you know the fate of the little sister, you know the puzzles, and you know what was expected of you and what you needed to do. A player shouldn’t want a different ending for the girl, nor should they hope for something different or darker to spawn from an older brother’s mind. My Brother Rabbit perfectly encapsulates the feeling and effect of anyone who’s tried to spin a story to help a loved one take their mind off something horrid. From hospital visits to difficult bedtimes, a good story can make everything go faster, and that’s something that Artifex Mundi has captured, crystalline, in this game. While it may not be for everyone, consider giving it at least a bit of a try: it’s ported well to the Switch, is worth the price of admission, and, frankly, is one of the better surprises I’ve seen in the past couple months.

What kind of story would you tell to help your younger sister’s pain and fear? My Brother Rabbit beautifully captures the effect that a good tale can create.