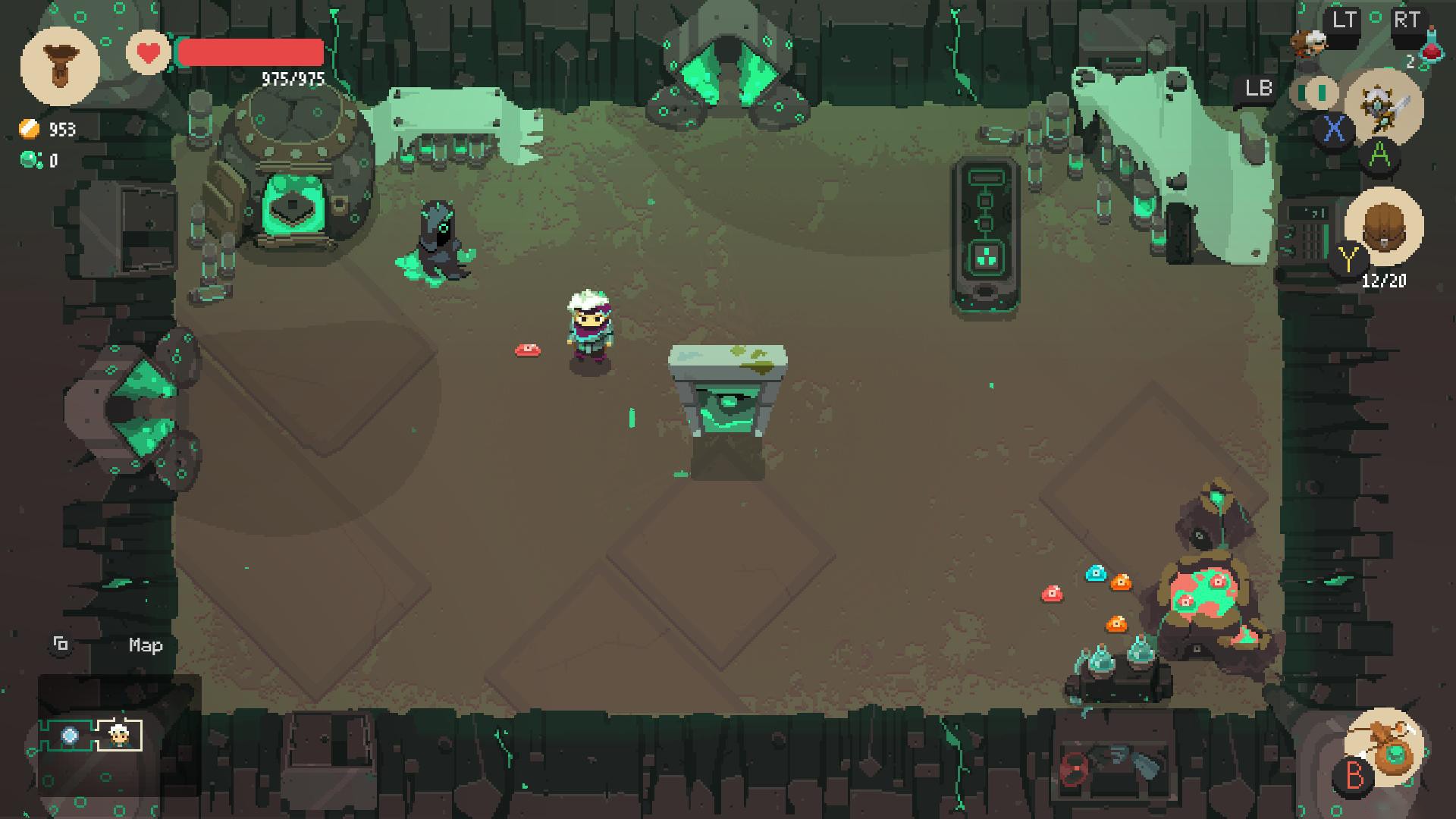 When Moonlighter was initially released a couple of years back, it immediately drew my attention and captured a certain element of gaming that I felt was sorely lacking on my Switch. The concept – shop merchant by day, dungeon hack-n-slash by night – was novel, and drew me into the world fairly quickly, given that the storyline was pretty threadbare otherwise. There was so much to enjoy in terms of the baseline mechanics, the graphics, and the ambient soundtrack that I spent my time playing it rather than reviewing it )though a fellow writer did tackle that on the Playstation 4). Time marches on, however; I didn’t return to the world of Moonlighter upon finishing it, having spent an exorbitant amount of time grinding out sales and slowly getting myself strong enough to face down the final boss. Now, about a year and a half after launch, Digital Sun (with 11 Bit Studios) has published the aftermath DLC onto the Switch, giving players incentive and new life in the world of dungeon merchandising. Welcome to Between Dimensions.

For all the faults that other people find with the game, I sincerely like that Moonlighter has always gone light on plot points. I mean, Will (the main character) is the last in the line of the Moonlighter clan, and he needs to keep the shop running in hard times. He does this by braving the dungeon to get stuff to sell that other shops need and to which don’t have access. It’s simply surviving capitalism. Now, there’s a strange new doorway that’s opened up where the old dungeons used to be, and it looks super creepy and foreboding, so Will is gonna go in there and kick some ass. Why? Because that’s what he does, and there’s probably loot to get down there as well. You ever try running an independent shop? You don’t need a dramatic romantic interest or a quest for revenge to keep your shop afloat, you do it because that’s what you do. The Moonlighter is Luke’s Diner: it keeps going because that’s what Will wants to do. 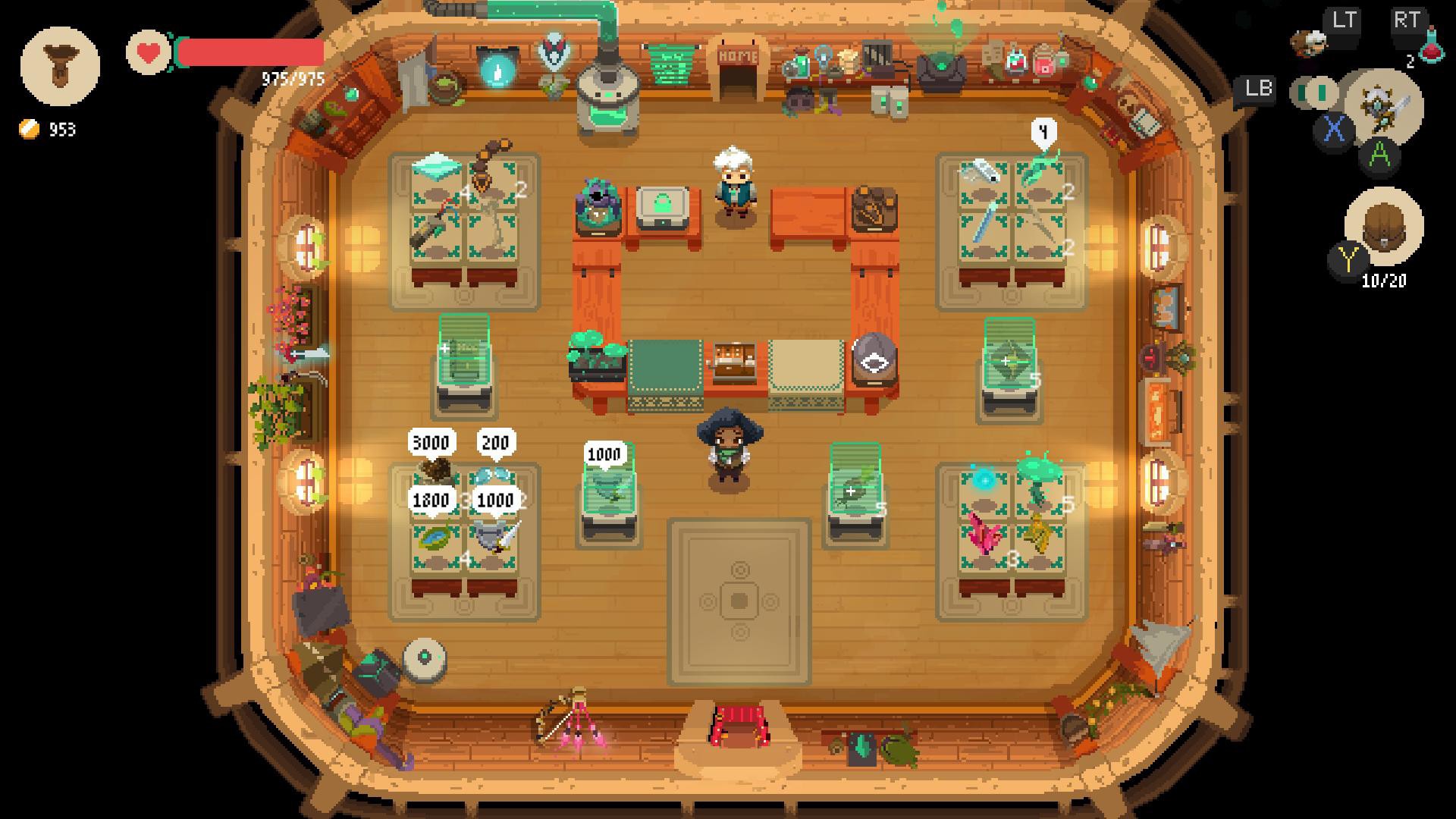 Between Dimensions opens up a brand new after story for the player faithful that make up Moonlighters core fanbase, but it comes with certain caveats. First and foremost, it’s distinctly a post-game DLC: it’s impossible to access unless you have finished the game. Therefore, if you haven’t been able to make it past the Last Dimensional Pirate, you’ll need to take a deep breath and really buckle down on grinding out the right equipment and additional enchantments. Once you have it situated, the new dungeon, called the Wanderer Dungeon, will become available, and it is full of a massive variety of new enemies, new weapons and even a couple of new familiars to help aid and abed you in your actions. Clocking in at ten full floors, it’s certainly worth the price in terms of expansive exploration, though players might feel, arguably, that it’s a tad expensive for a single dungeon. Granted, there are new mechanics and ideas added that can and will make the game feel more interesting, so read on before you completely accept or dismiss this new chapter.

The biggest thing that Between Dimensions brings, arguably, are the Trick Weapons, which are brand new takes on the core weapons that we’ve come to love and expect from Moonlighter. These Trick Weapons contain specific, built-in enchantments that consume part of Will’s health in order to activate, and it’s a fantastic risk/rewards system. While some of the enchantments are rather pithy, things like the Thief Gauntlets (which guarantee item drops) or the incredibly powerful Mechanical Big Sword are huge in game-changing elements, and have the added benefit of not needing to be crafted. Rather, the Trick Weapons appear within the Wanderer Dungeon and will stay with you until you have to leave, at which point the Trick Weapon will self-destruct. Personally, I utilized the Trick Weapons everytime I found them, both because they were novel and also because they were crazy powerful. Even better, once I realized that another aspect of the DLC was the Wanderer Dungeon becoming somewhat accessible from within other dungeons, is that the Trick Weapons are always a welcome surprise.

The enemies are frigging rough. There’s no other way to put it. Between Dimensions brings a lot of new things to the table, but the sheer tenacity and variety of new enemies that appear inside the Wanderer Dungeon are terrifying and tend to really wear on your soul and your pluckiness. You’ve got teleporting, gigantic stone worms, skeletons that are dual wielding weapons, plants that steal your items, and, in case you were worried, the mimic enemies are back to impersonate chests and screw you over. There’s nothing simple or easy about the enemies: nearly everything brings new attack patterns and conditions for striking, like split second dodge rolling to create vulnerability or, worse, needing you to get some of those new, awesome weapons in order to do any amount of damage that even makes a difference. The final boss of the Wanderer Dungeon doesn’t seem as intimidating as the Pirate was, but the fantastical amount of HP needed to carve, combined with a pretty intense attack pattern, make it the largest pain in the ass that I’ve had to deal with in recent memory. 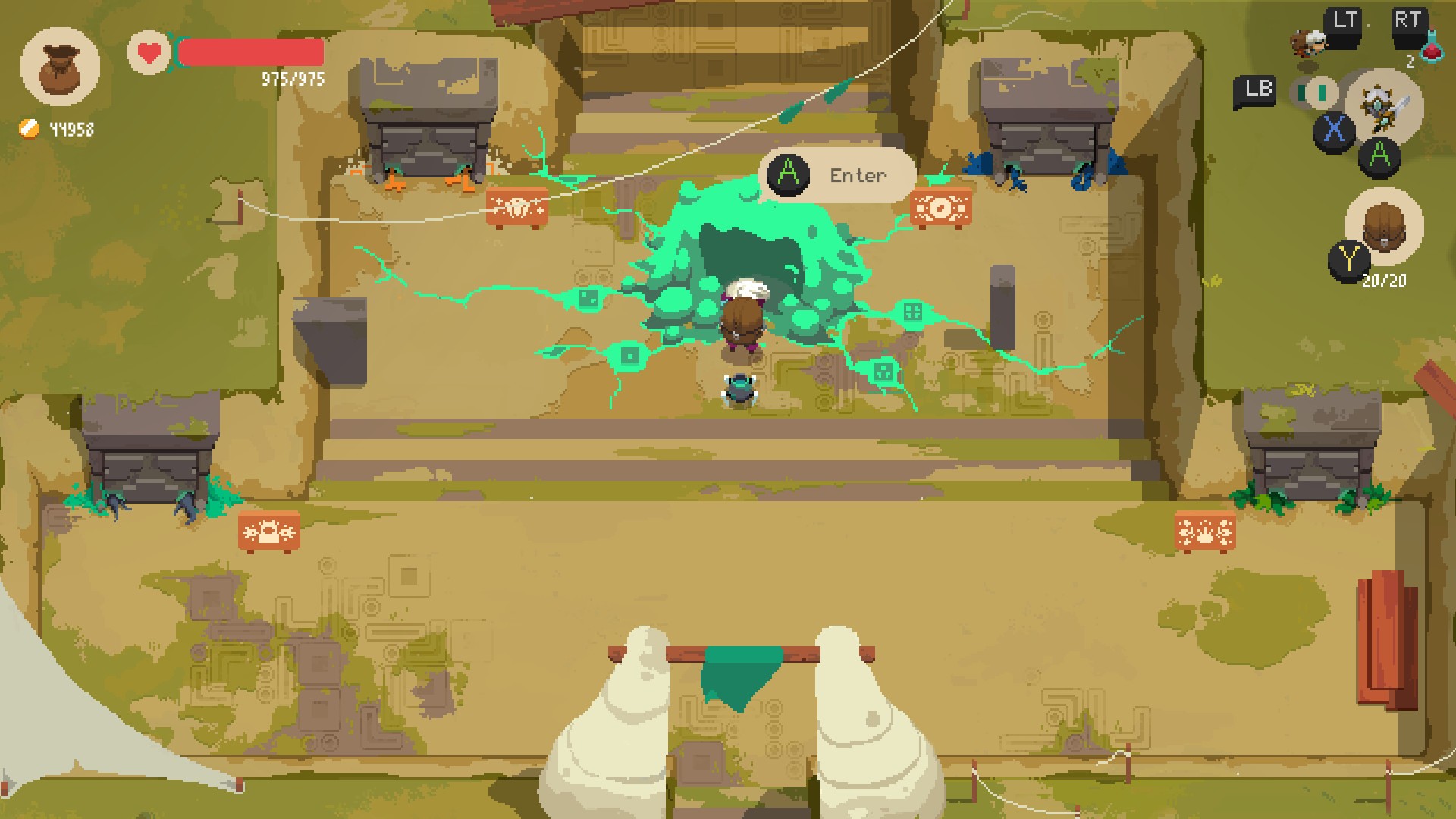 If there had to be a gripe with Between Dimensions, it’s that the entry bar for this particular DLC is not only high, it’s pretty high just in maintaining any sort of enjoyment within the new dungeon. Due to the level of difficulty, you quickly learn that a majority of the enemies that you encounter need those new weapons, and those new weapons are crazy expensive. You not only need to have hundreds of thousands of gold on hand, you need to have plenty of the unique item drops that come from aforementioned incredibly difficult mobs. Don’t get me wrong: the items that you pick up within certainly sell well enough at the storefront, but that’s still a lot of trial and error sales to maximize profits (unless you cheated and checked the wiki like I did), and even then it’s a LOT. Plus being able to return to any of the floors that aren’t the first floor requires a pretty crazy investment on your part to the Slime Alchemist. Tons of gold, slime particles AND cursed items means that you might need to dedicate an entire dive to just setting up a return point for the next one. This is time, money and sanity all rolled into one, and you get taxed out the ass to make it happen.

When Moonlighter first launched, it appeared like the perfect balance between shop management and dungeon crawling. Then, the further along you get, you realize that it’s way more dungeon crawling than shop management, and the shop aspect exists to essentially further the story and provide some minor but interesting elements. With Between Dimensions, the already polarized fanbase for this game gets fragmented even further, and it’s a really tough call to make. If you are enthralled with Moonlighter – in that it’s your number one, go to game – then the Between Dimensions DLC can add a massive new chunk of gameplay just in this one dungeon with cool new elements. On the other hand, if you were getting bored or frustrated with how Moonlighter handled itself in concern to the sales or the repetition, then Between Dimensions is a plague to be avoided at all cost. In either case, I appreciate seeing more done for this game (and also appreciate the free content that has come in), and I would honestly rather a developer add a DLC to an existing game to make it even more robust than just bang out a rinkadink sequel. It’s a grind, but it’s the grind we all expect, so Moonlighter does a good job of keeping in vein with what the diehard players have already come to love.

Return to the wild world of Moonlighter with a DLC package that can add either hours of satisfying spelunking or days of grinding, depending on your view.