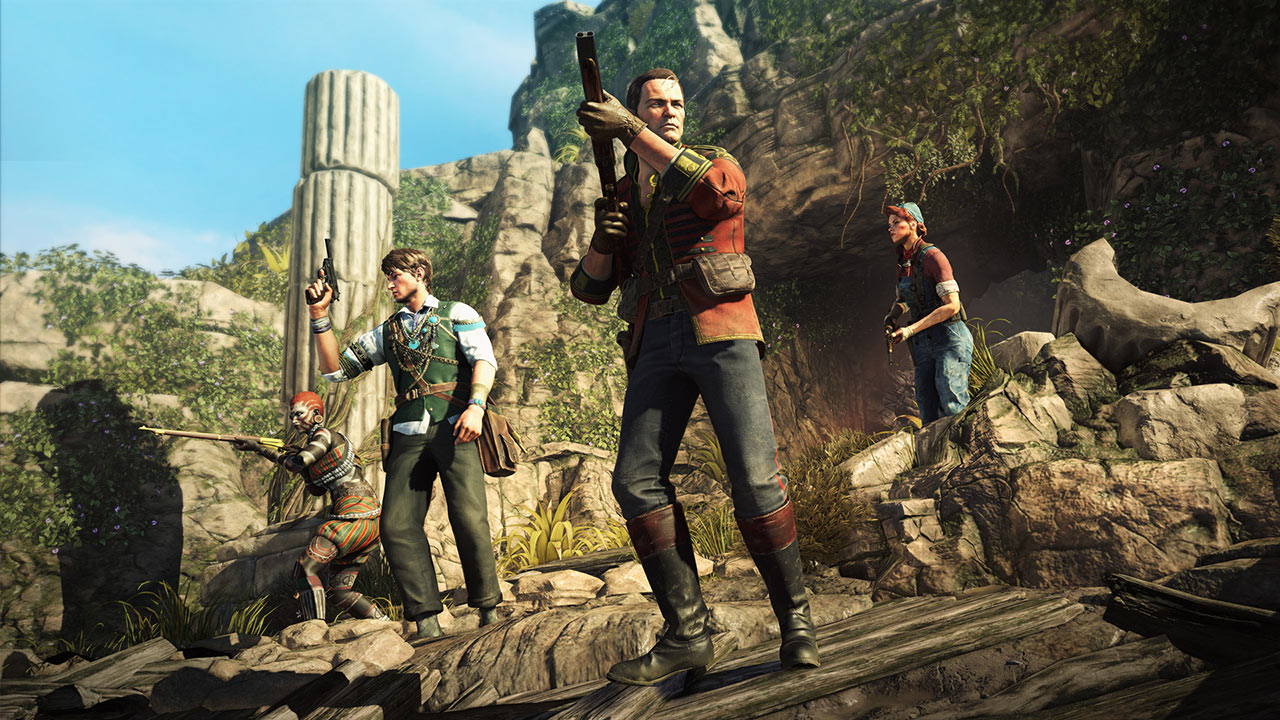 Oh goodness, not again! Seteki the evil witch queen has risen again, accompanied by many ungodly undead creatures! Oh my, whatever will we do?! Who can help!? Enter, the Strange Brigade.

Strange Brigade is a 1930’s themed co-op adventure game set in exotic Egypt! Strange Brigade also happens to be the name of the secret organisation that 1-4 players will take the roles of to defeat the undead that seem to rule this place. There are 4 characters to choose from in the base game, although more are available through purchasing the games season pass. Each character is completely unique with their own loadouts and personality. First up is Nalangu Rushida, an experienced demon hunter who starts off with an automatic rifle, Molotov cocktails and the ability to leap into the air whilst thrusting down a blast of fire! Next is Frank Fairburne, the tough army guy. He starts out with a Westminster rifle, dynamite and the ability to charge through his enemies with brute force, destroying anything is his way. Our next adventurer is Gracie Braithwaite, a Lancashire Lassie with fists of steel. She begins with a shotgun and grenades and her ability is to pull an enemy closer and then throw them away to explode! Our final adventurer is Professor Archimedes De Quincey, a posh chap with a knack for magic. Starting off with a Repeater and sticky grenades and also the ability to spawn a swarm of cursed scarabs to hone in on enemies. Quite the team, ay? Each character has its pros and cons, but get a full team together and you will be unstoppable whilst also having the most fun you can have whilst zombies are chasing you down. Whilst the game is incredibly fun adventuring with friends you can also go on this adventure completely alone, and yes, it is still incredibly fun but it is worth pointing out that it is a lot more difficult and will prove a lot more of a challenge if you’re up for it.

Now, killing the undead is not all you can do on Strange Brigade. With 3 game modes there is a hell of a lot to do. Campaign mode is your main point of call, playing through the game’s story progressing through various chapters killing zombies, mummies, fire throwing beasts. All sorts! Along the way also collecting various artefacts, perks and collectables in the shape of blue ceramic cats and also solving various puzzles to either progress further through a level or open a secret door to hidden treasures! You also have Score Attack which is all about killing the most enemies in the best ways to earn the highest score you possibly can. Finally, we have Horde Mode. You kill hordes of enemies which earns you gold which you can spend on new weapons or even opening up new areas in the map. Think of it like Call Of Duty’s Zombies Mode. 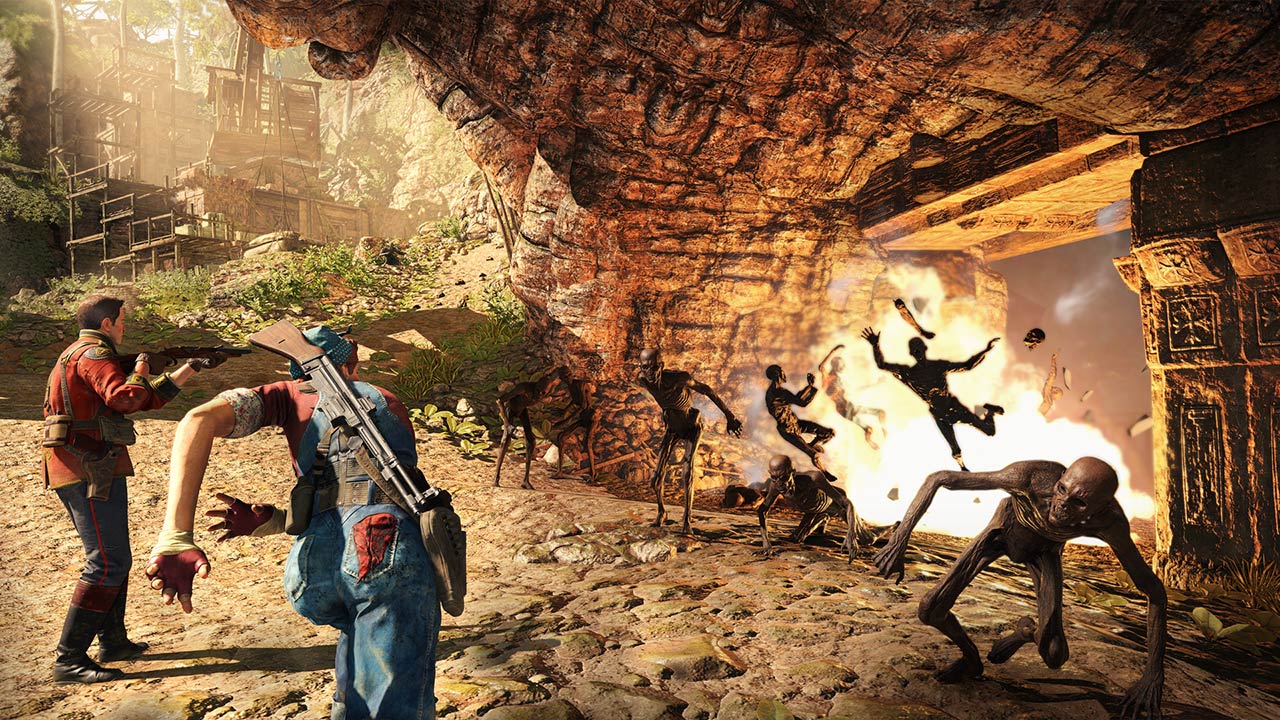 So, the game doesn’t offer much in the way of customisation, which it doesn’t have to, but I just love customisation in games. You can customise your loadouts and also customise what effects your gun has. You pick up this gems that will add a certain ability to your weapon, should you equip it. I have one of my guns right now that has a chance of causing a fire on every shot. It’s awesome. But for a game that is heavily set around collecting artefacts, it would be nice to have somewhere to show those off. You have a little journal that shows what you have collected but I would’ve liked a little more, like a little artefact room or something to explore. That would be cool.

Strange Brigade is an incredibly charming game in many ways but the most charming thing about it? The narrator. The things he says are hilarious and he also makes you, the player, feel like he is communicating with you directly. For example, when you pause the game he will say things like ‘Two sugars in Mine’ like you have paused the game to go make a cuppa which at this time I actually did! I was amazed. It’s the little things… Oh, he also has a hatred for cats. 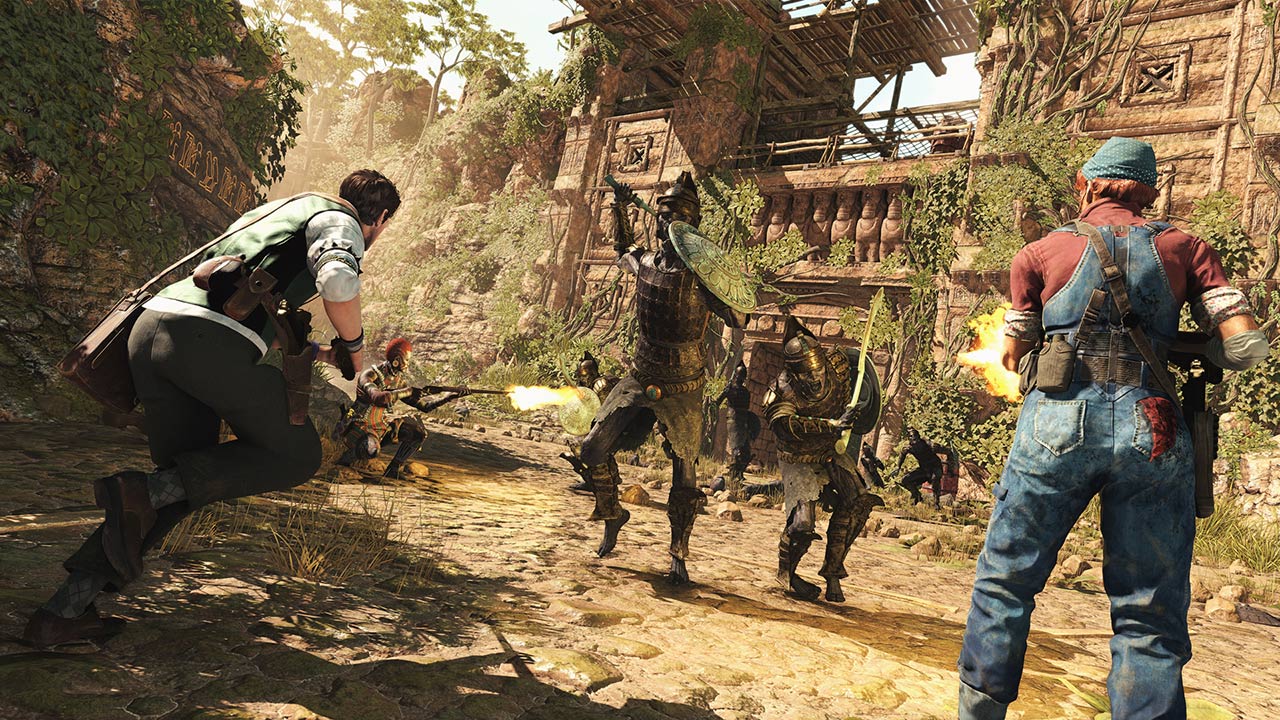 This game looks absolutely stunning. I was actually really shocked at how beautiful it actually looks. Everything is so bright and vibrant, each chapter is breath-taking and each enemy and character has so much detail to them. It doesn’t just look like the same enemy cloned all the time too, there are so many different enemies to come across, it’s extraordinary. Also, every cutscene is like a 1930’s tv show. Oh and the soundtrack just screams of a North-American Safari. I love it.

Overall, Strange Brigade is an incredibly satisfying and fun adventure to have with friends and/or alone, alike. With 3 different game modes and many different ways to play this is incredible value for money, the hours you will spend in-game is insane and, if you’re anything like me, you will just get lost in the exhilarating gameplay and play for hours at a time without even meaning to. It looks incredible and plays incredible and will prove an entertaining but equally challenging adventure, however you choose to play it. Whether that be alone, or with friends.

Strange Brigade is an incredibly satisfying and fun adventure to have with friends and/or alone, alike.