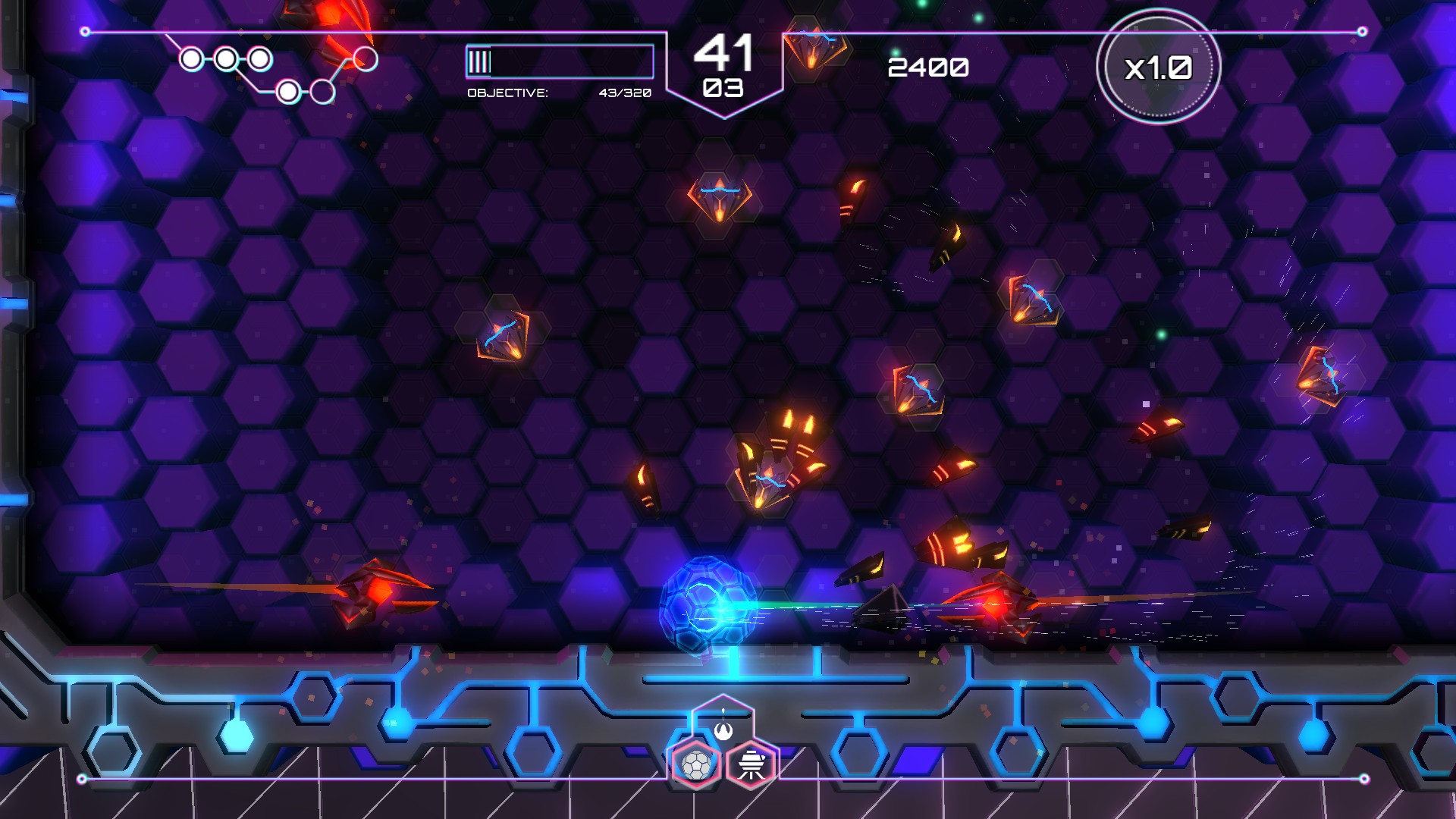 Twin stick shooters can be very entertaining, such as Geometry Wars or Resogun, but they can also be lacking a lot of depth, such as Inksplosion. Tachyon Project is the latest entry into the genre and this one actually boasts a story which is a tad rare in these kinds of games. So let’s find out if Tachyon Project is something that is fun for 10 minutes or something that has a lot more going for it?

Tachyon Project’s plot concerns itself with an artificial intelligence called Ada, who you control, who has been created by two hackers. Ada is then introduced into ten different systems. Unfortunately for the hackers that made Ada, things don’t go swimmingly and Ada has to make her own way out. The old style graphics used to portray the story is quite charming and does add a bit more depth to Tachyon Project. The ‘enemies’ within each network is meant to be its version of antivirus, it’s quite a clever way of implementing an enemy. 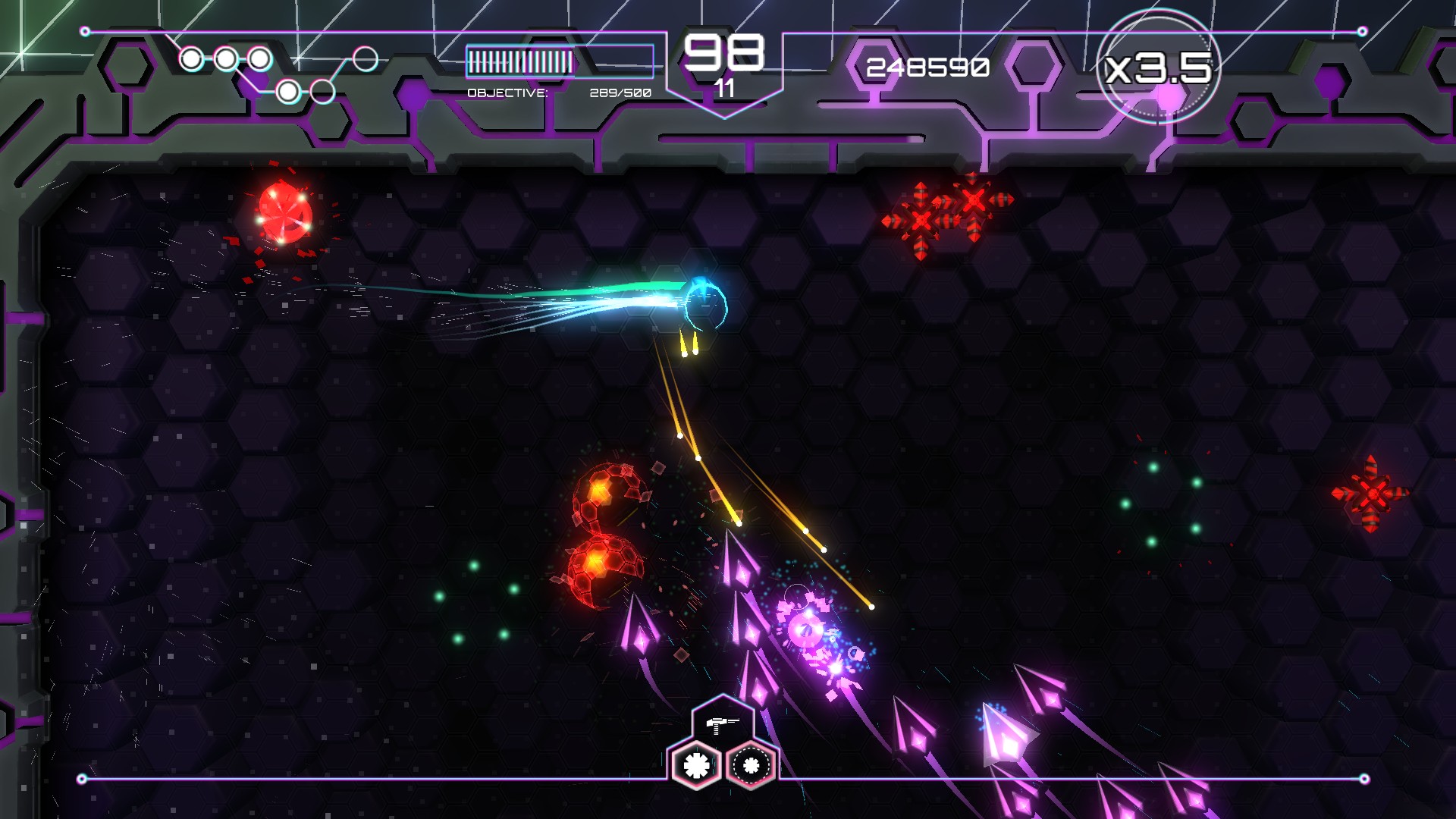 Like similar titles, enemies come in waves and you need to destroy a certain amount of them or survive for a certain amount of time to proceed to the next way until you complete the stage. There are a surprising number of enemies that are unveiled as you proceed through, each quite different in its design and the way it moves on-screen. At the start, it’s just simple mines that need destroying which is quite straight forward but then they get more difficult. For example, one appears on the screen and acts like a bull running at a red flag i.e. you. Some mines have extendable spikes, there are enemies that are very quick but weak and others are slower but strong. There are enemies that form an energy grid which causes you damage if you hit the grid whilst others act like a centipede. It’s definitely one of the largest and most varied of enemy types I’ve seen in a game of this size. Now your health bar is really a timer, when you destroy an enemy your timer increases, if you get hit then your timer reduces, if it hits zero then it’s game over. Luckily for you if you die your checkpoint is the last wave you completed.

Another layer of depth to Tachyon Project is the perks and weaponry you can add to your arsenal. You can improve Ada in a number of ways such as having faster fire, higher initial health, more useful mines/bombs such as freeze bombs which are self-explanatory and proximity mines which are very useful at blowing up several enemies at once. There will be many occasions when the screen is full of enemies and you’ll need to be quick and accurate to ensure your odds of progressing do not become surmountable. As mentioned earlier, there are different objects to pass each wave such as destroying a certain number of an enemy type, it adds a bit more variety to Tachyon Project. 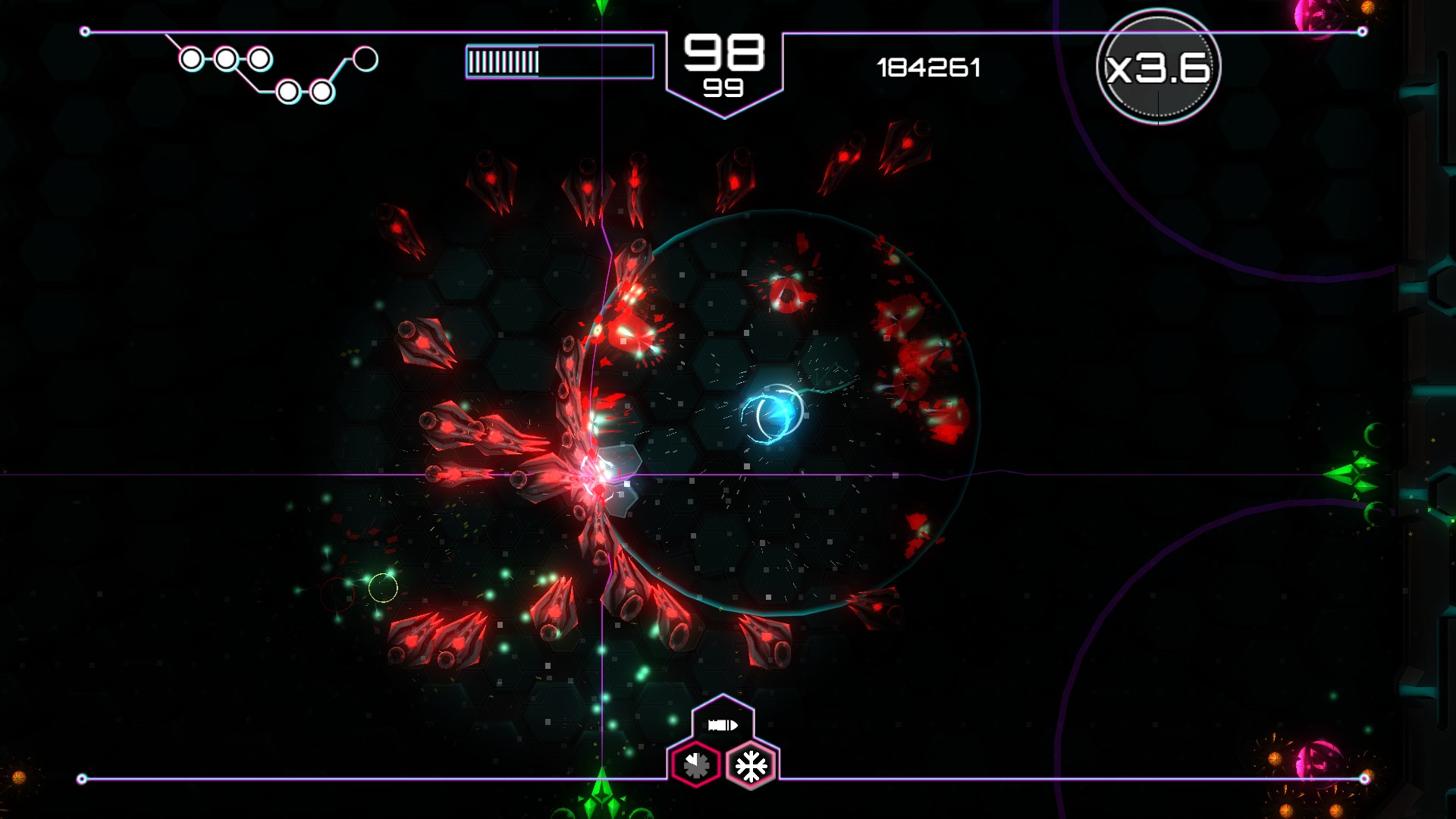 Graphically, Tachyon Project is fairly simple to look at, the different enemy types are varied enough to be noticeable whilst the background is very basic but does the job. The menu is reasonably polished looking and the explosions are what you expect. Musically, it’s got a retro sound to it and is loud enough not to be distracting or annoying. The plot is not too think in detail but is vaguely interesting and gives you an explanation on why you need to get through each wave and subsequent network. There is an online leaderboard for you avid competitors.

Get your Twin Sticks at the ready and prepare to complete the Tachyon Project!