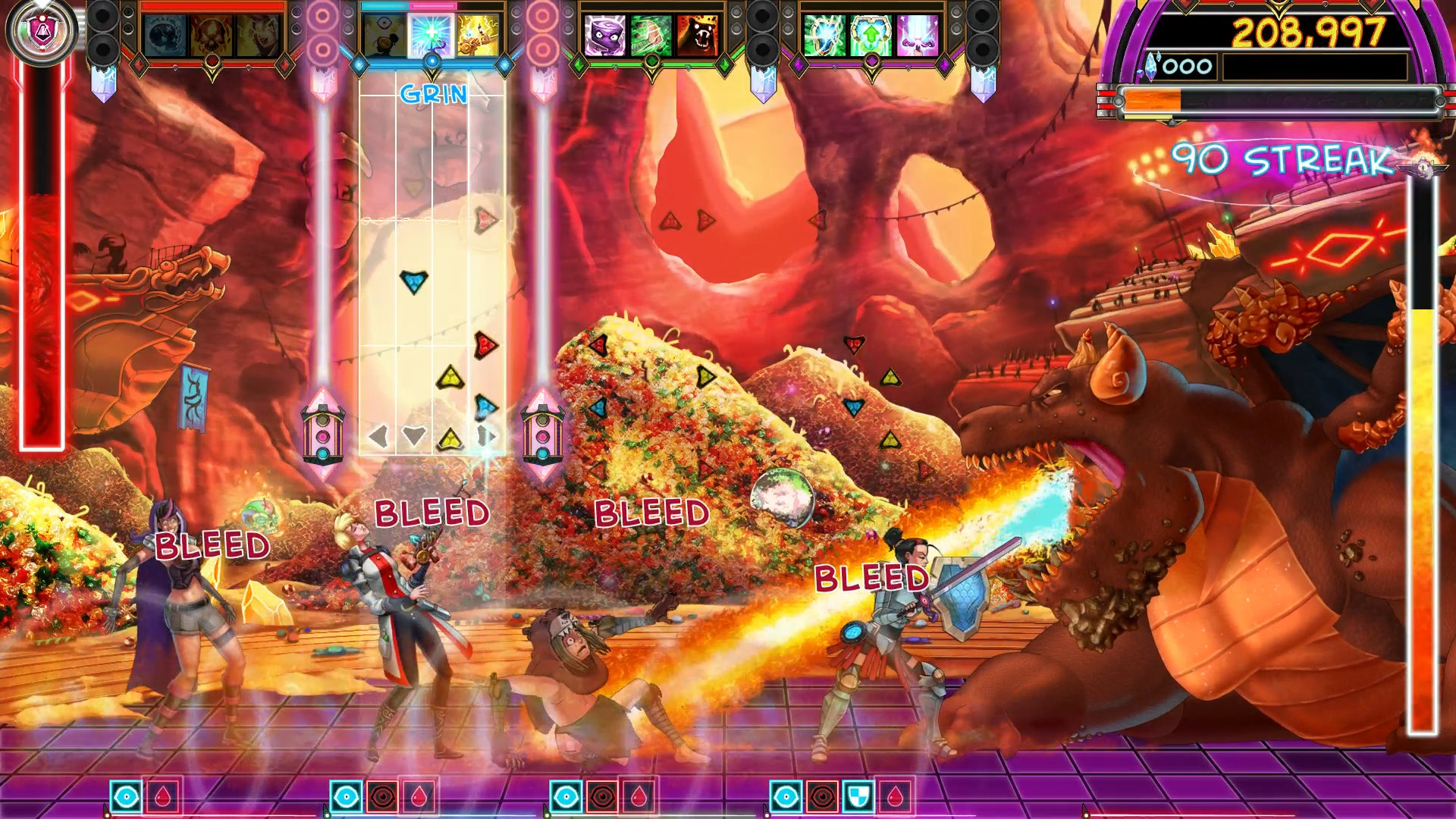 I really like rhythm games, but a rhythm RPG? I wasn’t so sure. Still, there have been plenty of puzzle RPGs, not to mention a mountain of other genre crossovers, so yeah, why not. The more I thought about it, the more I was convinced it could work as long the developer, Puuba Games, got the balance right and kept the emphasis primarily on the rhythm element of the experience. It would also need some great tracks too; you can have the most mechanically brilliant rhythm game in the world, but if you don’t have a decent selection of songs to back it up, then it all falls to pieces rather quickly.

Luckily, The Metronomicon: Slay the Dance Floor has a surprisingly fantastic and brilliantly eclectic selection of tracks. I have no idea who Shiny Toy Guns or the charmingly named, Jimmy Urine are (I suspect that most won’t), but a good song is a good song, and I was very pleasantly surprised by just how many of the tracks got stuck in my head. Beyond the obvious want to improve my score, I actually replayed a whole bunch of stages just to hear the songs again. If that’s not the sign of a good rhythm game, I don’t know what is.

While this is a crossover, mechanically speaking, it really is a rhythm game first and an RPG second. For anyone who has played the Rock Band’s or Guitar Hero’s of this world, the core gameplay will be immediately recognisable. The big difference here is that, rather than having one chord bar ala Rock Band et al, The Metronomicon is closer in design to the equally brilliant, Rock Band Blitz. 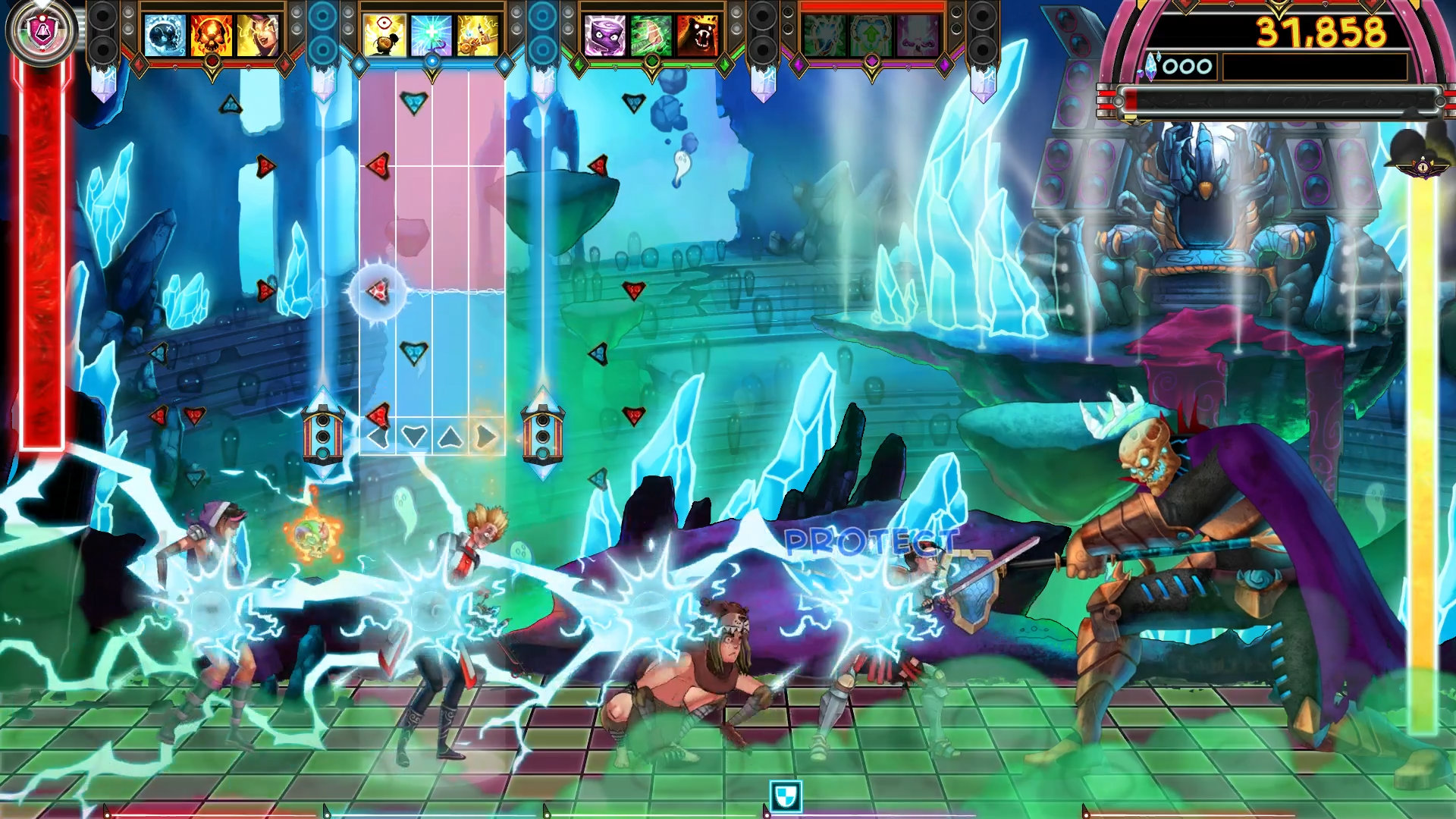 With four bars going at once, each represented by a different character with a distinct set of skills, you can flick between each as you attempt to keep your string going while tactically choosing to lock in a selection of attacks or build the level of a single character to unleash a single, but notably more powerful attack. For most, this will be done using a controller, and like rock Band Blitz before it, a standard controller works just fine with the games’ use of directional inputs and face buttons combing for a simple but effective control scheme. Still, for those with a Rock Band 4 controller still knocking around the house, playing the game with a big plastic guitar is still the more enjoyable and involving way to experience the game.

A lot of the RPG mechanics are surface level systems that, rather than turning the rhythm genre on its head, instead provide a unique twist to what is an otherwise relatively standardised approach to the genre. Rather than battling another band, here you’ll be battling a collection of unruly beasts using the “Rhythmic Combat Arts”. It’s all explained in what proves to be a somewhat bland story involving what are, in my opinion, a collection of disappointingly bland characters. I like the idea of the genre cross-over, and on a technical level, it totally works, but as for the actual story elements, they simply aren’t strong enough to feel like anything more than a mostly unwanted distraction.

It doesn’t help that they all look so terrible either. Ok, terrible is probably a tad harsh, but I was not a fan of the art direction or the character design at all. The monsters look ok(ish), but the main cast range from lame to annoying with the voice work and writing doing little to improve matters. Still, it’s easy enough to skip the story, and when it comes down to brass tacks, progression is down to little more than defeating a collection of enemies linked to a particular song. You move from one location to the next, but other than a handful of minor aesthetic changes, all you are really doing is moving on to more difficult songs and more challenging enemies. There are items and upgrades that you collect as you progress, but most items are equipped automatically with the RPG elements of the experience largely taken care of behind the scenes. 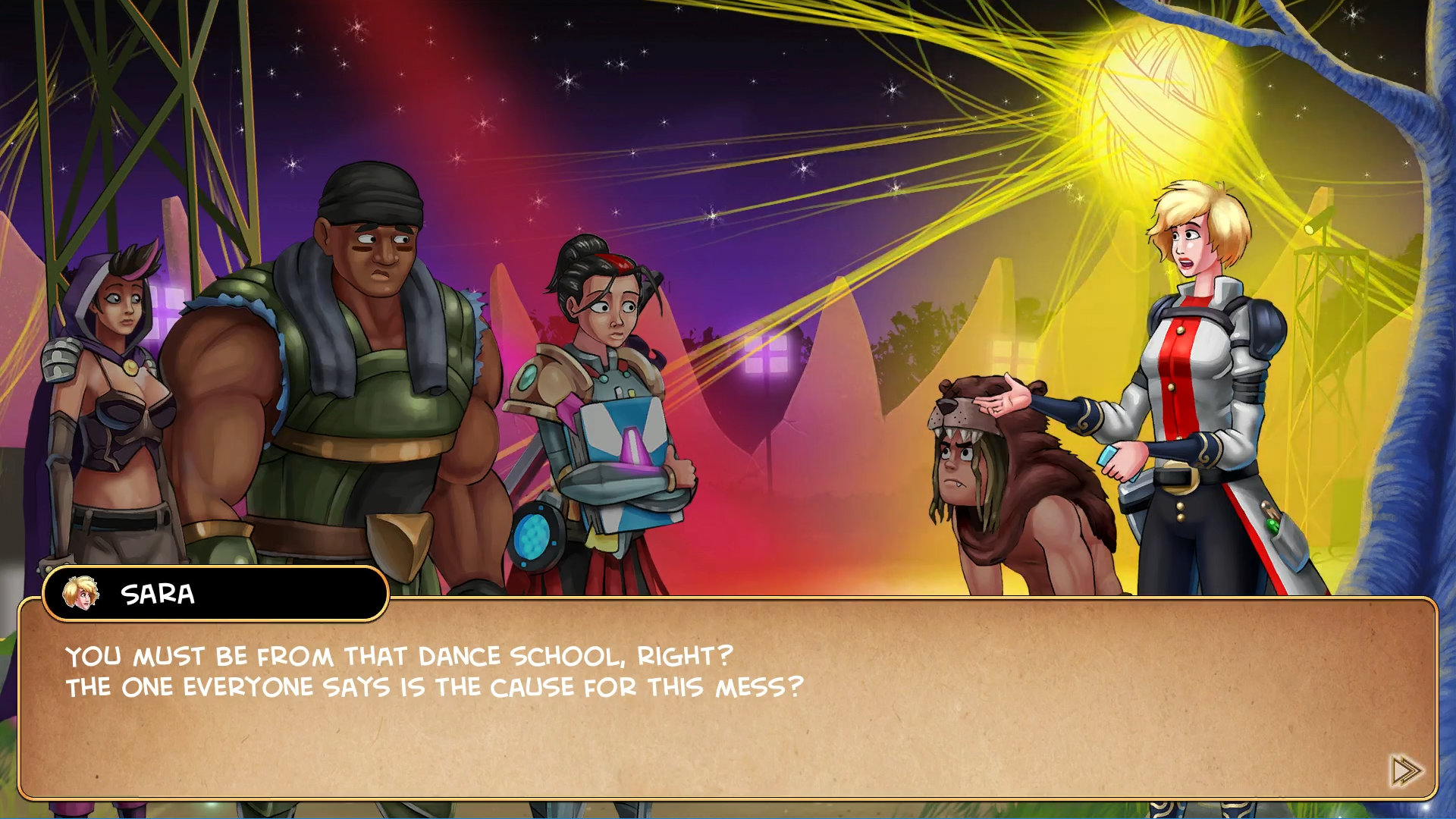 That’s ok though as it’s in the unique characters being linked to each chord bar that the real benefits of this crossover make themselves clear. While the emphasis is always on keeping strings going and not missing beats, with each character having their own unique skills and spells, you’ll need to move between each tactically if you are to take down the more challenging enemies later in the game. Not only do you need to ensure that you keep hitting the beat, but you’ll also need to ensure that you are combining healing abilities with offensive attacks as your move through the song. You’ll also need to ensure that you’re using the correct character from an elemental perspective if you want to take down the monsters as quickly as possible. The system itself is simple enough (water is strong against fire etc), but in the heat of battle, it makes for a compelling experience, one with a surprising amount of depth. You’ll be able to take down a lot of the enemies by simply switching between characters at random and keeping the string going, but if you’re looking to make your way up what are (at the time of writing at least), very scalable global leaderboards, you’ll need to make more tactically savvy decisions.

Sadly, while the depth is certainly there, the somewhat clumsy UI does make things much harder than they should be. While it’s easy enough to see when you’re moving between tier 1 and tier 2 spells and attacks, trying to ascertain which element you should be focusing on is a much trickier affair. There are visual indicators on screen for both your party and the monster that you’re currently fighting, but with the emphasis obviously on keeping the string going, they are often too hidden away to be obvious with the game asking that you take your eyes off the core action to see what you’re up against (and thus missing the point). It’s a minor niggle, but one that I found increasingly annoying as I moved on to more difficult enemies and tracks.

With plenty of catchy tracks, a fantastic co-op mode and a brilliant coming together of two diametrically opposed genres, Puuba Games’, The Metronomicon: Slay the Dance Floor overcomes a handful of poor design choices and its rather questionable presentation to deliver one of the more compelling rhythm games released for quite some time. Mechanically and conceptually it’s as good as anything out there, but sadly, it lacks the charm of games such as Parappa the Rapper or the technical brilliance of genre heavyweights like Rock Band and Guitar Hero. Still, it’s nothing if not unique, and with very few rhythm games on the market right now (and no other reason to pull your Rock Band 4 controller out of the cupboard), The Metronomicon: Slay the Dance Floor delivers a much welcome entry into an increasingly niche genre.