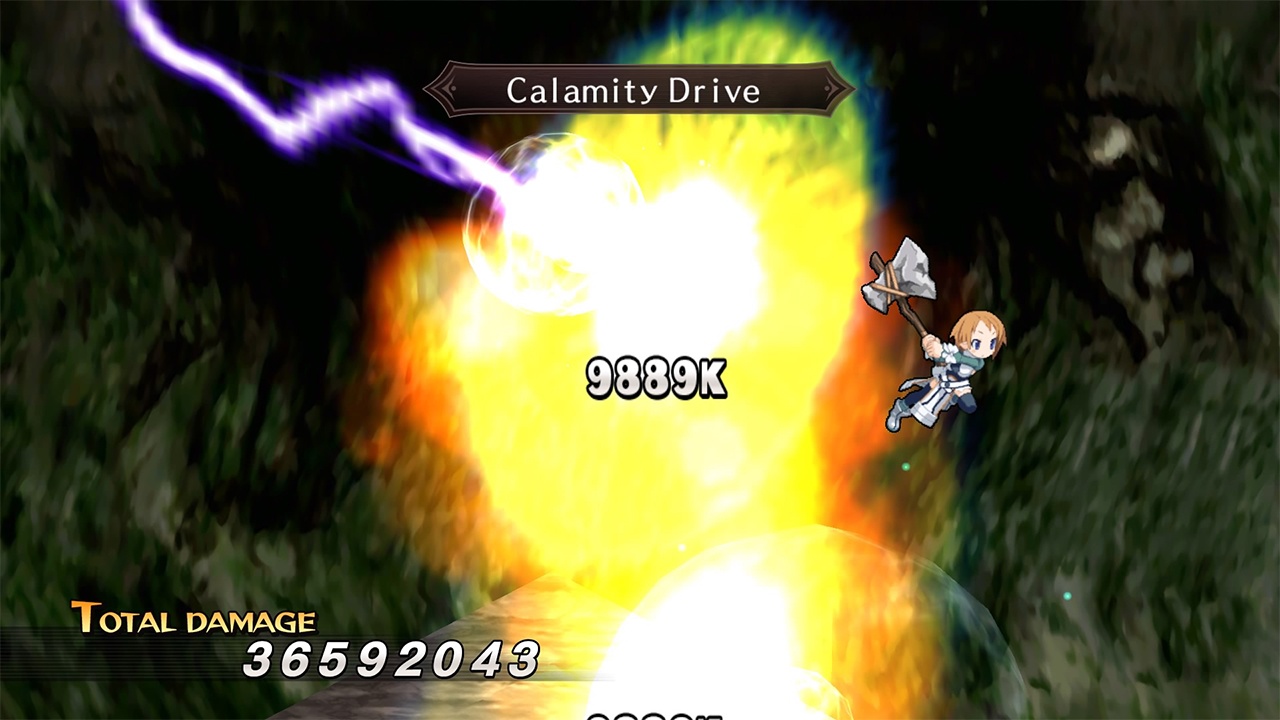 I will fully admit that this review is biased by a heavy dose of nostalgia. Afternoon of Darkness on PSP was my first foray into this genre-redefining series and I’ve been a fan ever since. Afternoon of Darkness is definitely in my top ten strategy titles and no other characters have quite won me over as strongly as Laharl and his loyal (?) vassal Etna have. Disgea  is a long-running series known for its almost limitless replayability. It redefined the genre by adding the ability to throw other characters and removing the level cap that most strategy RPGs possess.  For those not familiar with the series, the game is set in a fantasy world where angels and demons live side by side — a world where might means everything and where, if you want something, you take it. As such, any and all problems are solved on the fields of battle.

Disgaea 1 Complete (D1C) follows the story of Laharal, the son of a dead overlord, and his quest to earn the respect of demons in the Netherworld–by force. The story is told via voiced cutscenes interspersed between combats. The writing is tongue in cheek and has a tendency to break the fourth wall. It pokes fun at a lot of tropes–the half-witted hero type, for example–while turning others on their head. The cast is comprised of some of the zaniest, most unscrupulous beings ranging from humans to demons to death lords. Because D1C is set in the Netherworld threats and violence are commonplace and characters will go out of their way to do evil deeds– which is an interesting and entertaining change from the norm. In short, the story and the characters it employs is well worth a play through.

The Overlord’s Castle acts as your hub where you’re able to buy and sell items as well as manage your team. There’s also facilities like the hospital where you can heal and revive your party members for a fee and the Item World where you can level up your equipment. More on that later.

With the exception of the main characters, you create the members of your party using preset appearances based on job class and you’ll unlock additional ones as you progress. Job classes dictate what skills your characters can learn.  You can customize your characters further by naming them and changing their color pallette. Creating a character requires you to choose their creator, to whom they’ll become a pupil, and an initial investment of Mana, which is earned by defeating foes. Characters can be given a starting aptitude which gives you a greater initial skill point pool, but higher aptitudes cost more Mana and the highest tiers have to be taken before the Dark Court for approval. 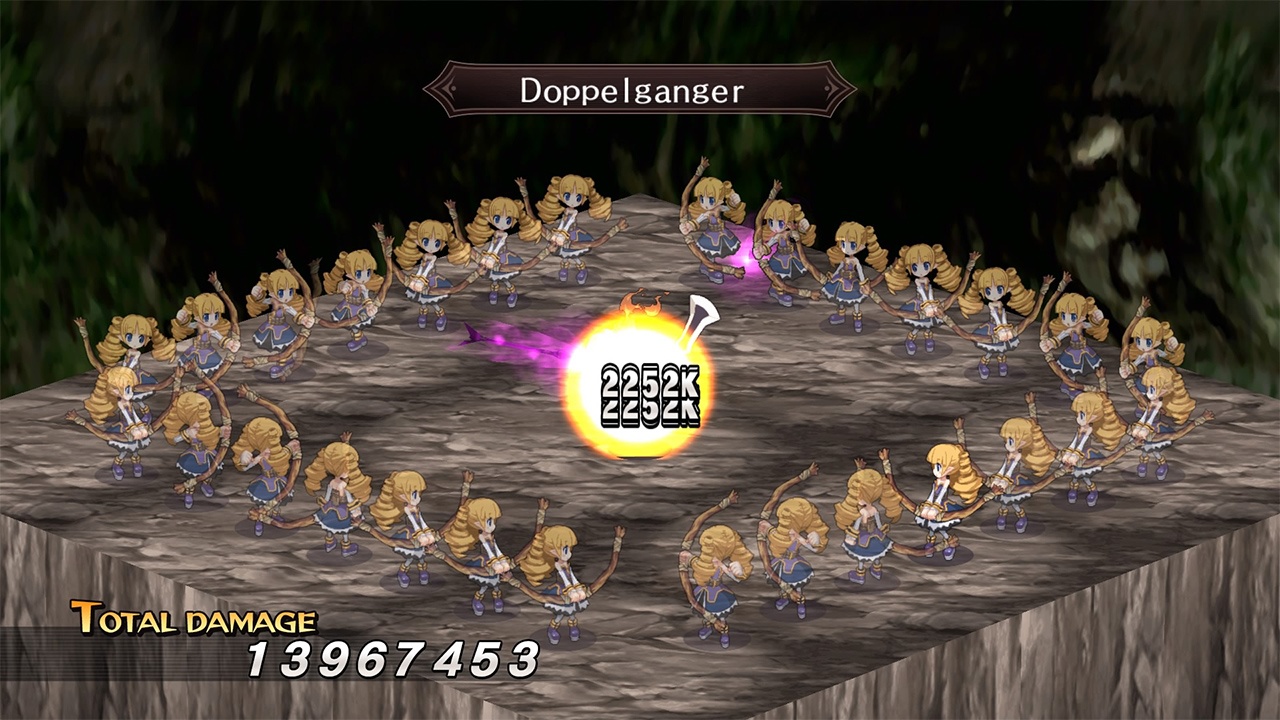 The Dark Court is where you can present proposals to a jury of your peers. Because this is court in the Netherworld, you’re free to bribe those voting”yay” or “nay” and, if you’re feeling confident, you can coerce them by force. Keep in mind that those attending your hearings tend to be much stronger than the folks you’ll face outside of the castle walls.

After you’ve created your characters, they can be equipped with four items–one weapon and three accessories of your choosing. They aren’t restricted by class, but it makes sense to pair units with weapons befitting their strengths. A mage, for instance, should still use a staff because wielding an axe won’t do much damage. Skills gain levels and strength the more you utilize them. You must use SP in order to perform skills.

Now on to the bulk of gameplay: combat and party management… through combat.

This is a turn based strategy game on a grid. You and the enemy take turns in phases, meaning you can move all of your characters during your turn. Characters are deployed from a single point on the map and this point adds extra strategic wiggle room due to the ability to return a character to safety should their health fall low. You’re limited to a pre-set number of characters as far as deployment goes, but you’re free to attack and then return to base, range allowing, which makes it possible to bring out another attacker right away. As such, luring stronger enemies to your spawn point is a viable strategy to defeat them with fewer casualties than a head-on assault. Fools rush in. After you’ve moved and given your characters commands, you can execute attacks, which is useful for those uncertain of the outcome of their assault, or end your turn which will trigger all of the attacks you’ve lined up before allowing the enemy to retaliate.

During your turn, you have a few options. There are typical commands like move, attack, and special, which need no explanation, attacks are flashy and fun to watch and using them frequently makes them more effective. The more unusual option is the “throw” command. If I had a dollar for every time I was playing a SRPG and couldn’t reach an enemy I desperately wanted to finish off during my turn, I’d be a rich woman. Disgaea’s throw mechanic makes it so that you can move quickly across the battlefield. But wait, there’s more! Lifting and holding allies can keep them safe from harm as the character holding him or her would be the one to take damage from an attack. Just keep in mind that if you’re holding an enemy, the character holding it will take damage at the end of the turn. 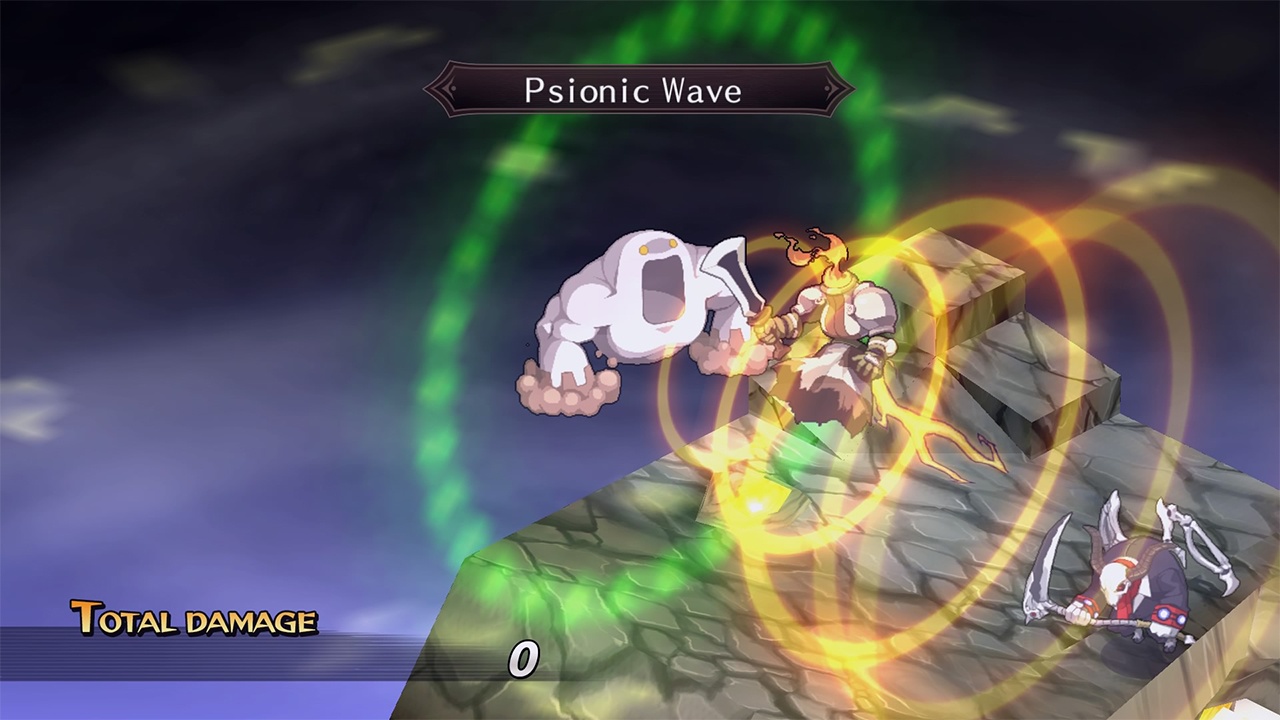 Another nuance to the fields of battle are Geo Symbols. These are crystalized energies that affect Geo Panels, coloured tiles that carry a special effect. They can be destroyed to set off a chain reaction that damages the enemies standing on correspondence Geo Panels and build the combo meter. Combos raise the bonus gauge, which nets you additional experience and items.

Your characters can be strengthened to level 9999 which is part of the game’s near-infinite replayability. You can also rebirth your characters, resetting them to level one in favour of earning more stat points. You can also level up weapons by delving into the Item World, which is essentially an endless dungeon gauntlet that will level up the amount of levels corresponding to the number of floors you clear. Leveling them up not only makes them stronger, it makes them look better, too. There’s a ton of things to do and if making your characters as strong as physically possible is your thing, you’re in good company here.

The “complete” tag makes the game seem as though this game contains a significant amount of content over the original format and, unfortunately, that’s not the case. D1C does have graphical fidelity improvements and quality of life improvements to the UI, but other than access to a new playable character, Asagi, this is still the exact same Hour/Afternoon of Darkness you played back in the early 2000s.

Disgaea 1 Complete breathes new life into Afternoon/Hour of Darkness for a more modern gamer. It adds some quality of life improvements and makes it accessible on next-gen consoles, but not much else. For some, this will be enough to justify the $49.99 price tag. I was charmed by my second time around and given that I’ll get hundreds of hours out of the title, I think it’s well worth the investment.