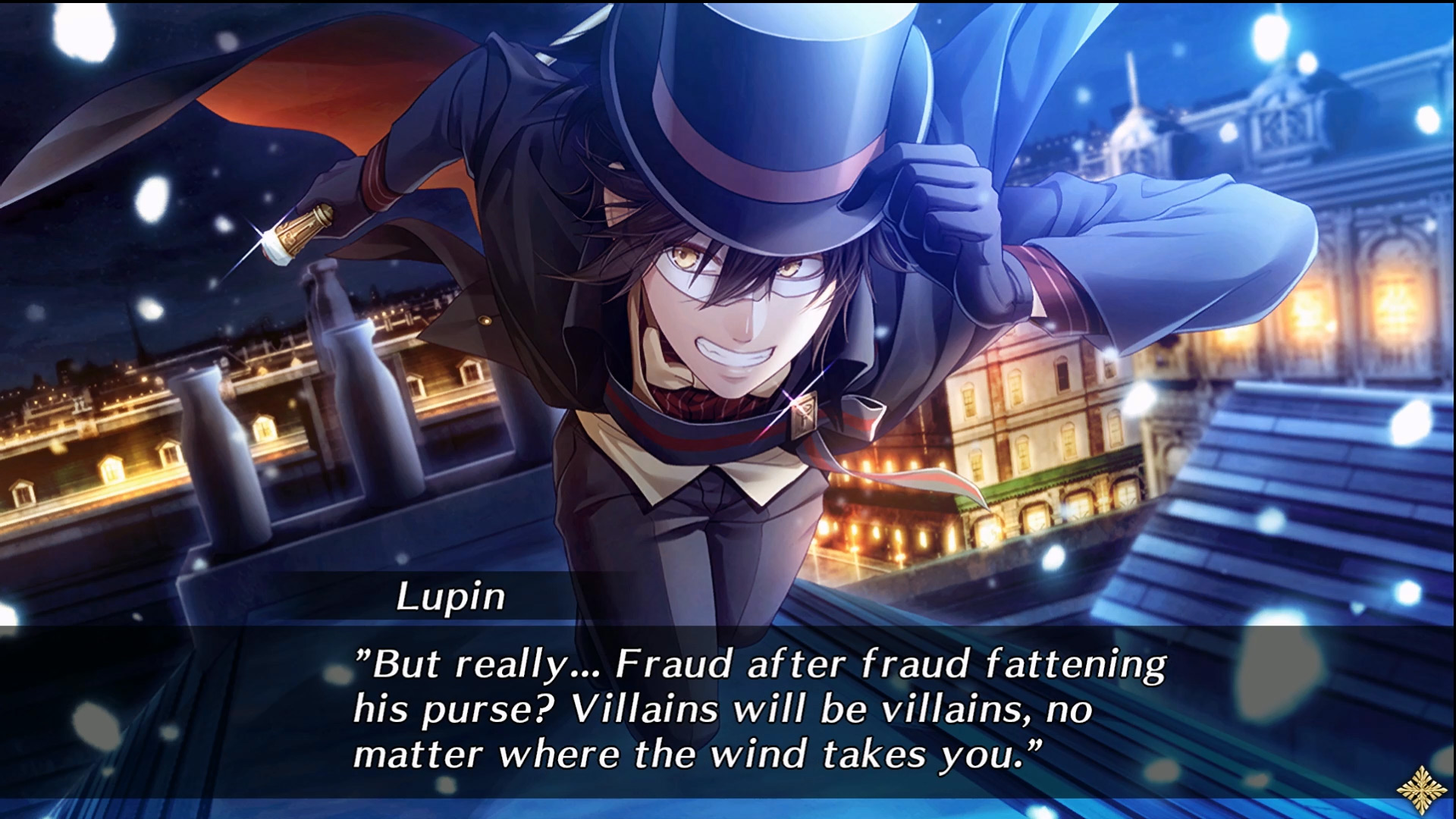 For the uninitiated the original Code: Realize was a visual novel game released back in 2014 and follows the classic steam punk anime style. It features a cast of literary/historical characters such as Arsene Lupin, Abraham Van Helsing, Victor Frankenstein and Impey Barbicane. The original plot concerned itself around a woman called Cardia, who has isolated herself because she carries a deadly toxin which means the skin rots on anything that it touches. She is then kidnapped and subsequently escapes to find her father. Code: Realize ~Wintertide Miracles~ is the second fan disc towards the original game. 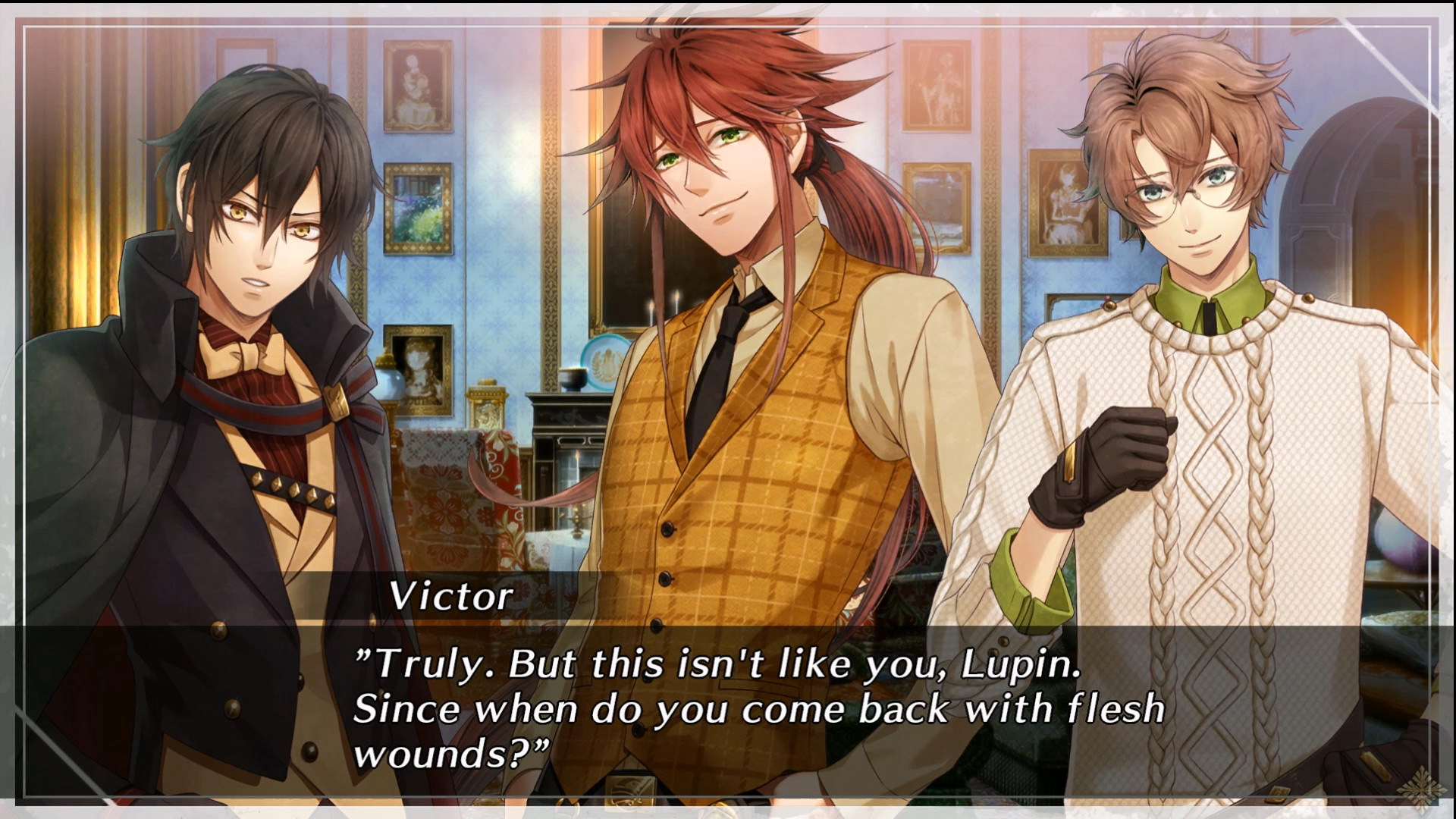 Now Code: Realize ~Wintertide Miracles~ is not like the more recently reviewed Steins: Gate Elite where there were several choices to make which dictated where the story goes. Code: Realize ~Wintertide Miracles~ is a much more refined experience. There is a Triangle Date section where you choose a combination of two characters to go out on a date with your character, so ten combinations in total. This is the most novel part of Code: Realize ~Wintertide Miracles~ because after making your choices you simply watch the relevant story, there is no further interaction. There is a ‘secret’ part to this section which when selected will show 3 more stories, there are no combinations to make, you just watch the stories. The next playable section is If Story: First Christmas, where there are 5 stories, one for each character Lupin, Van Helsing, Victor, Impey & Saint- Germain. This time round you can make a choice on where the individual stories go, but at best you’ll only have to make 3 decisions to progress the plot, in some cases only once. The next section has two further stories for Finis and Sholmes, again these are just movies to watch. If on the menu you select the teddy bear you play the Canteralla part of Code: Realize ~Wintertide Miracles~. This section has few more choices to make but nothing more than 5 decisions will need to be taken to direct where you want the story-line to go. The last playable option is the Special Epilogue, there is a separate story for each of the characters mentioned before. During each of these narratives you only get to make one choice per scenario. Playing all these stories will unlock various other movies.

As you can tell there really isn’t much to do in Code: Realize ~Wintertide Miracles~. You will need to have played the first game and first fandisc to have any previous knowledge of what is going on in Code: Realize ~Wintertide Miracles~. Even if you did have a prior knowledge of the scenario you are effectively watching a set of movies. There’s very little interaction or gameplay, the movies which you watch are not particularly interesting, the triangle dates all play out the same way, the two you pick to go on a date with end up being super competitive which I guess is what would happen in real life but it doesn’t really help you care about any of the characters. 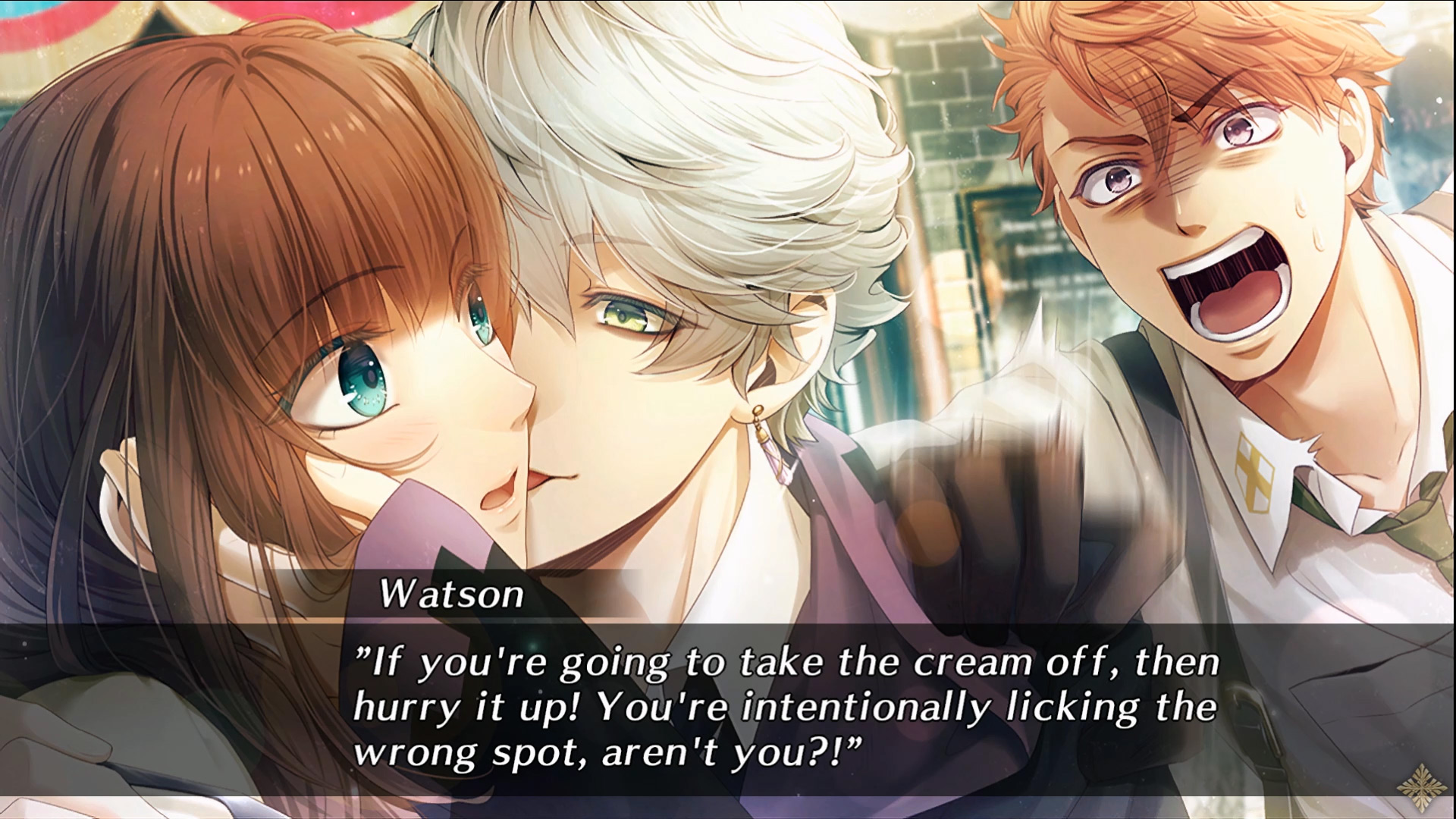 Visually Code: Realize ~Wintertide Miracles~ is stunning and from the menu to the movies everything comes across in a very charming way. However if you want to skip the dialogue (visual novels are text heavy) and scenes then you can fast forward them, if you do that though then you won’t know what is happening on-screen. Where Steins:Gate had multiple interactions which took you down specific paths, Code: Realize ~Wintertide Miracles~ does not have that, it has a very limited set of decisions to be made based within a world you’re already more than aware of (if you’ve played the previous titles). Like most visual novels you can save at any time during a story, usually you would do that when you knew you might be making a choice that will take the story down a certain route, in Code: Realize ~Wintertide Miracles~ the saving acts more like a bookmark’

Code: Realize ~Wintertide Miracles~ is a visual novel which is mostly just fan service. This is not one to start with as your first visual novel because there simply just isn’t enough to do. If you were a massive fan of the series then you’ll surely enjoy something that is contained within however there really isn’t a lot to do besides watching several movies in a row.

Code: Realize ~Wintertide Miracles~ is a visual novel which is mostly just fan service. This is not one to start with as your first visual novel because there simply just isn’t enough to do.