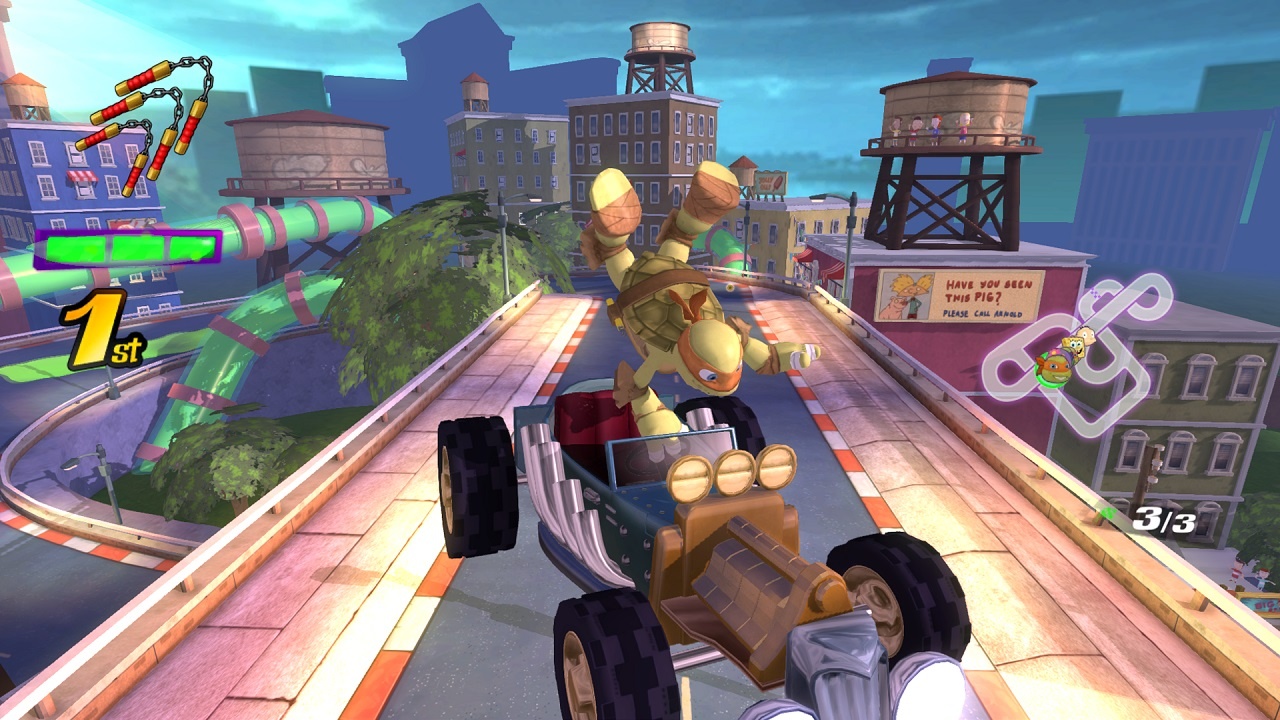 The only thing that makes something bad, even worse, is when it could have been great. Take, for example, a little movie called Eragon. Fantastic source material, great actors, a really decent budget, and what happened? A steaming pile so bad that fans globally disavowed it and there is a zero percent chance of another movie being made as long as everyone who remembers the first one is still alive. It sometimes takes a small, careless mistake to make something good turn bad, but sometimes it’s even more than that. When the stars align and something is almost cosmically bland and disappointing, it’s like a real effort – a united cause of missteps – came together to bring you the worst that your brain could imagine. That’s what made that Monster Truck game from last year so amazingly terrible, and it was so bad that I don’t have the energy to search this website to find out the real name.

What we have here, though, is a horse of a different but still terrible color. Nickelodeon Kart Racers was already an incredibly brash and borderline crazy move from the part of Nickelodeon Studios, if only because it released on the Nintendo Switch as well as everything else. I don’t know if you’ve paid attention, but, even if other great racing games have debuted elsewhere, Nintendo still holds the throne securely for kart racers (especially since Sonic went braindead and added a bunch of awful conditionals to the last iteration). Still, in theory, there is definitely potential with a Kart racer from Nickelodeon. One of the few television channels to really go toe-to-toe with Disney, Nickelodeon has provided some high quality content over the past couple of decades, with the 90s being their strongest time period bar none. So to see that some of the racers come straight from their largest IP in the 90s (Rugrats), a person could start to get hopeful. Hell, you can race as Reptar, the Godzilla knockoff! A three lap kart racer, there are three difficulty levels to support multiple cups, each one built around another familiar IP. There’s the Stoop Cup, which represents the Stoop Kid of Hey Arnold (which also provides racers here), there’s the Kraang Cup, for the Ninja Turtles (oh right, they’re on Nick now), and others.

The courses, to their credit, look fairly decent. Each one has a good representation of the animation they’re emulating, and it’s rather fun to race around. Spongebob has this ridiculous power to stay relevant in the eyes of the world for a time period well beyond reason, and being able to race past his iconic pineapple house undersea is rather fun. The studio managed to capture Hey Arnold’s school cafeteria quite nicely, a place that I never thought I’d be racing through. Naturally, these courses are far from 1:1 captures, and plenty of additions have been made to make it more interesting. There are sections of dry land that have been covered in the trademark Nickelodeon Slime, which acts as a bit of a lubricating agent but also as an interesting alternate fuel source for the karts. When you drive over these patches, it fills up a secondary tank which can launch a nitro-like boost and keep your edge if you’re in first. The slime looks good enough, and the placement in the courses is varied but not overkill. Well, not always. Some levels have slime the whole way through, at which point you’re not using karts anymore, it’s a weird jet ski sort of contraption which is strange to handle and able to just boost nonstop. 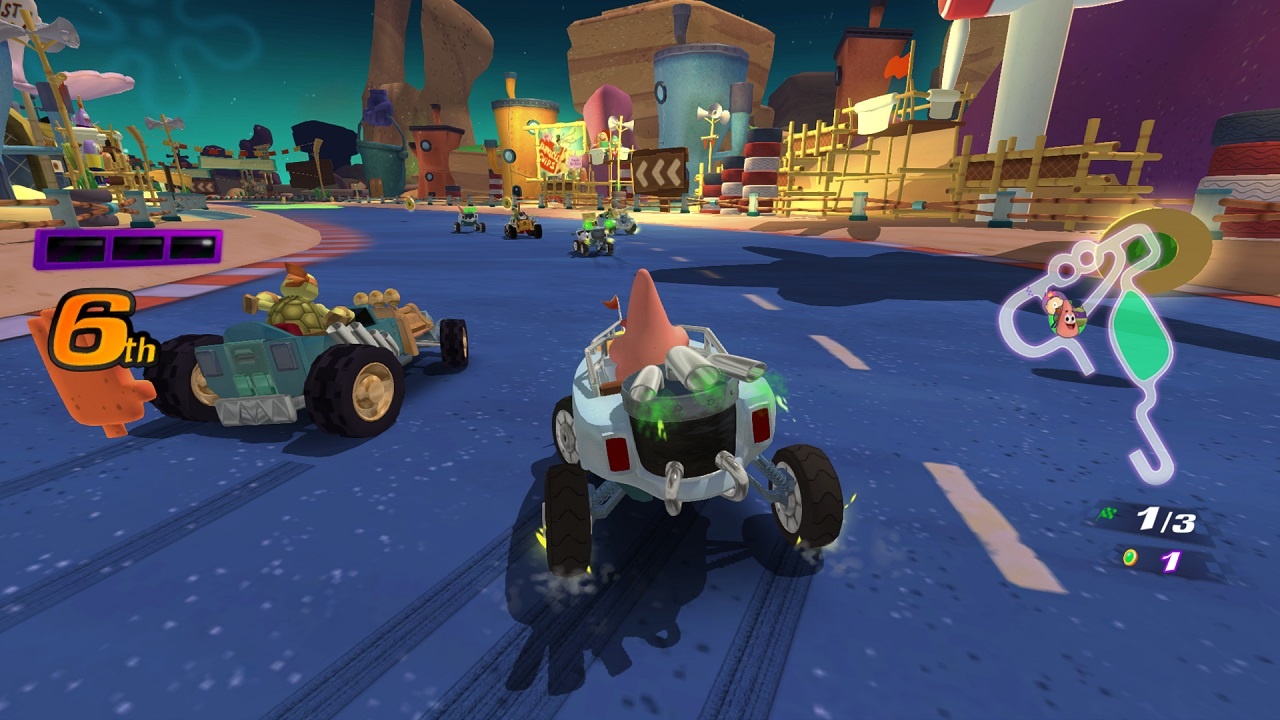 Alright, I’m trying to fend off the bad news, so let’s try one more thing that’s positive. The kart upgrade system. You can customize and upgrade the Nickelodeon Kart Racers in a variety of ways. There’s engine, tire, color and flat-out “new vehicle” unlocks that come from either purchase or success. The coins that you collect from the different races can be used to purchase different customizations from a store screen on the main menu, and they’re decent enough. I liked the Reptar paint job, that was nice. The issue comes that most of the things are damn expensive: I did a full Cup circuit, getting first place every time, and I still couldn’t afford most of the tires. The only real way to unlock everything in a decent manner is to be a good racer and get lucky on the “Victory Lap” when you finish a circuit. The victory lap is a timed affair where you have one minute to get a bunch of packages and coins, but I guess you can only get four packages before you’re done? It’s weird: I had like 45 seconds left (because I’m not a chump) but they still called it over and showed me that I unlocked a potato clock engine which did make my next races easier and faster. So that’s something.

But here’s where the issue comes in. I’ve mentioned Rugrats, Hey Arnold, Spongebob and Teenage Mutant Ninja Turtles for some reason. Notice how I have yet to mention any other IPs. That’s because they’re not here. There’s no Angry Beavers, No Doug, No Jimmy Neutron…I can understand why Fairly Odd Parents isn’t here (because Nickelodeon always seemed to hate that show) but why the frick isn’t Rocket Power? That’s literally a show about people going fast all the time! Or The Wild Thornberries, they had a giant RV they drove everywhere. There’s probably a ton of reasons why we don’t have some of the heavy hitters of yore in here (I don’t think Ren and Stimpy or Invader Zim would even fit in) but what the hell with recent successes, like Loud House? That could easily be in there! And why the hell did we decide on only the Ninja Turtles? There are so many awesome villains who could be racing as well!

Fandom aside, the game also has massive issues in terms of performance, and that’s a massive killer in the eyes of people who are somehow okay with everything else. Every racer appears to handle identically in form and only has differentiation when upgrades are implemented. The idea of drifting is something that is omnipresent, but executed with no fanfare, flair or aplomb whatsoever. You just automatically start drifting as soon as you hold a button and stop when you release it. You also get a boost, sometimes, but you never know when because a sound effect plays but there’s no visual cues. Speaking of which, the audio just really cuts me to the core: there’s sound effects from Figure It Out peppered in, but no sign of other classic Nick game shows that could have been so sweet. Anyone else want a Legends of the Hidden Temple cup? I sure as hell do. 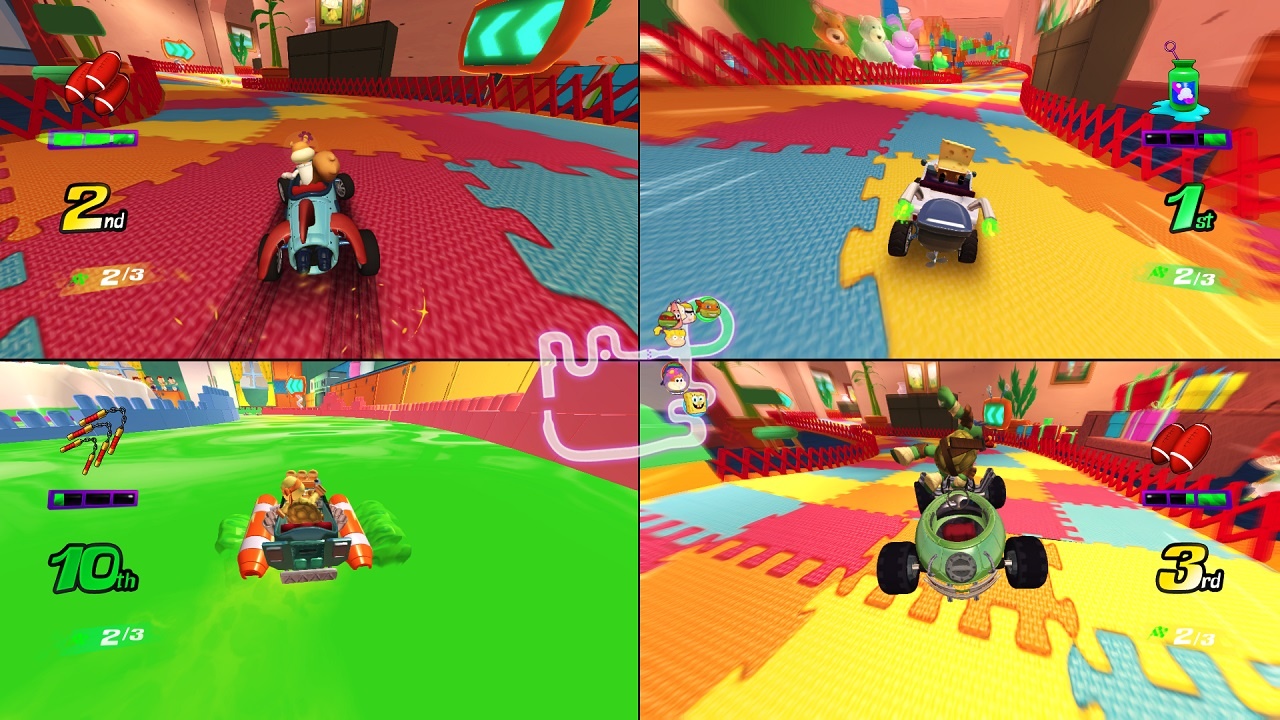 And the AI is weirdly aggressive and difficult, even on the lowest difficulty level. The items that you have to launch have clunky, simple animations that don’t speak to trajectory or planning whatsoever. The bottle rockets (which are literal milk bottles) fly in a straight, dopey line that doesn’t feel fast enough to justify their existence. You can occasionally get pizza or jellyfish stuck to your screen, and it’s annoying but not enough to throw you off from being able to drive. I’d say the worst hazard is the bubbles that you can drop, because I forget I dropped them and mistake them for a power up when I circle back around. That’s right, my biggest enemy when I’m racing is myself. That’s sort of a metaphor for this game, but I can’t put my finger on it precisely.

But the killer of it all is that it just feels so boring. Nickelodeon Kart Racers has all these great backdrops, handful of good characters, a massive setup in terms of potential…and then you just drive, listlessly, for three laps. I figured out the problem maybe halfway through the Glove Cup: the tracks are just a bit too long. With other kart racers (and even racing games in general), there’s a nice balance between the thrill of terrain changes and turns to the spots where the other racers could easily overtake you. But, for some reason, every second of these tracks just feels like they overstay their welcome by a beat. If you’re drifting through a long slime turn, you feel it ask you to keep turning a second after you’d prefer to stop. If there’s a tunnel to go through, you’re underground a moment longer than you’d expect before surfacing. Even the jumps are odd: I’m in the air, watching my character celebrate, a split second more than I think they deserve to. Maybe that’s due in part to the weirdly long loading times. Maybe it has to do with the fact that I kept getting XP to level up to nothing. But everything just remained for more time than it felt allowed.

Nickelodeon really should have field tested this more before bringing it to prime time. I don’t think there was ever a chance that this could have overtaken Mario and his clan as the premiere kart racer, but it could have held court and been a decent sidequest for race enthusiasts. Instead, it’s totally unbalanced in every direction. Not strong enough to be a good racer for drivers, not simple enough for newcomers to have fun and ease into it. Not nearly enough old characters to attract for nostalgia’s sake, not enough new ones to draw in young fans. If you simply love those four shows and NOTHING ELSE, then maybe this could sit well. But my seven-year old asked me if she could stop playing after one race, and that’s especially telling in my eyes. This is a game meant to grab kids attentions, and it couldn’t keep mine for more than the eight minutes it took to do the first race. You can roll the bones with this one if you’re feeling lucky come Black Friday, but I think most would say to speed on by and pick up something else.

Oh yea, where the hell is Rocko???

Black flag on the second lap.