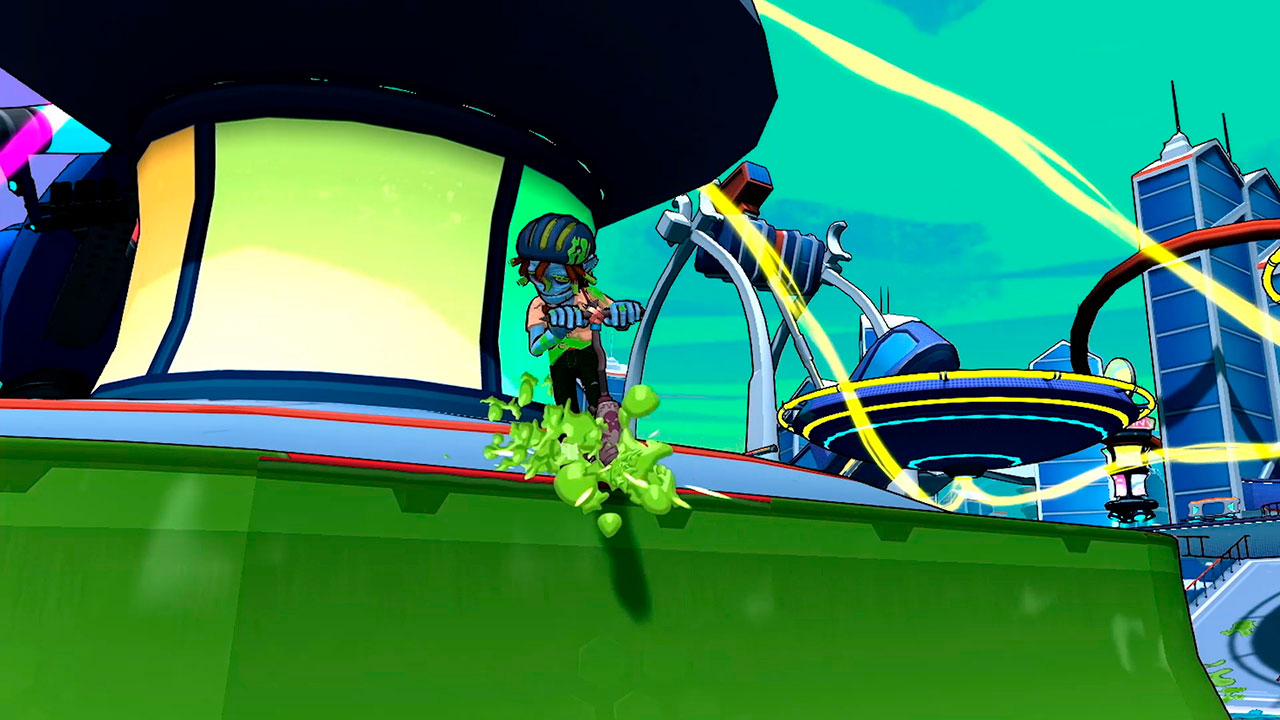 Crayola is one of those names that resonates with your childhood in a variety of ways. When I was young, Crayola was the watermark for good drawing tools: the crayons were strong, the markers were vibrant, and the colored pencils seemed to break way less often than others. Crayola has also been a pretty good company at staying relevant as time marches forward, creating new products and new takes on products to make sure their brand is fresh. From a cool assortment of different drawing tools (I loved their Slick Sticks once upon a time) to some interesting digital technology (coloring pages that render 3D through a smartphone app), they’ve done a lot to keep up with the youth of today. That’s why I was a little shocked when I saw there was a new game coming from them, and it was a scooter racing game, of all things. “Hesitant” doesn’t begin to describe my feelings going into it. However, after a few hours and several gameplays later, I can safely say that Crayola Scoot is a surprisingly fun and inventive game.

Crayola Scoot puts you in the seat of a slightly customizable avatar (gender, height, skin color and “splash” color) as they look to become the best in the world of Scooter racing. However, in Crayola’s take on it, this isn’t just a traditional racing game: in fact, being fast is far from the most important thing. Taking tips from a variety of mostly forgettable stunt games, a lot of Crayola Scoot is aimed at performing amazing tricks and being fast and versatile on your scooter in terms of getting to goalposts, grabbing items and outmanoeuvring other players. In the single player campaign, your success at various tracks and events leads to your EXP rising, your level increasing, and attracting the attention of other legendary scooter riders. They then challenge you to a certain competition, and, if you win, your notoriety rises, you go up in rank, and you’re one step closer to the ultimate goal: winning the coveted Color Cup and being the best scooter rider ever!

Now, right out the bat, I gotta say this is one of those places where it’s a little tough being a video game critic (insert tons of jeers and snide remarks about playing video games). But it’s true, especially when it comes to a game that isn’t aimed at my age demographic at all. With something like It’s Spring Again, the divide was so apparent and obvious it was easy to separate my feelings from the software itself. But, with Crayola Scoot, there are elements that don’t necessarily sit great with me, yet I know they aren’t meant to appeal to me. So when I say “I hate the avatars and think everyone looks a little weird and off,” I know that’s because I’m not a kid and because Crayola didn’t want to deal with the headache of having 8-13 year olds try and customize their face like this was Fallout 4. There’s basic settings for what players look like, no one particularly stands out, and all the real customization comes in after you get a few runs in. Additionally, I can look and say “This is really cool, but I wish there was a deathmatch mode” and understand that isn’t happening. So just know this game is E for everyone, it’s primarily aimed at the age range who still enjoy/use Crayola regularly, and the fact that I found it enjoyable in any dimension is just the icing on the cake. 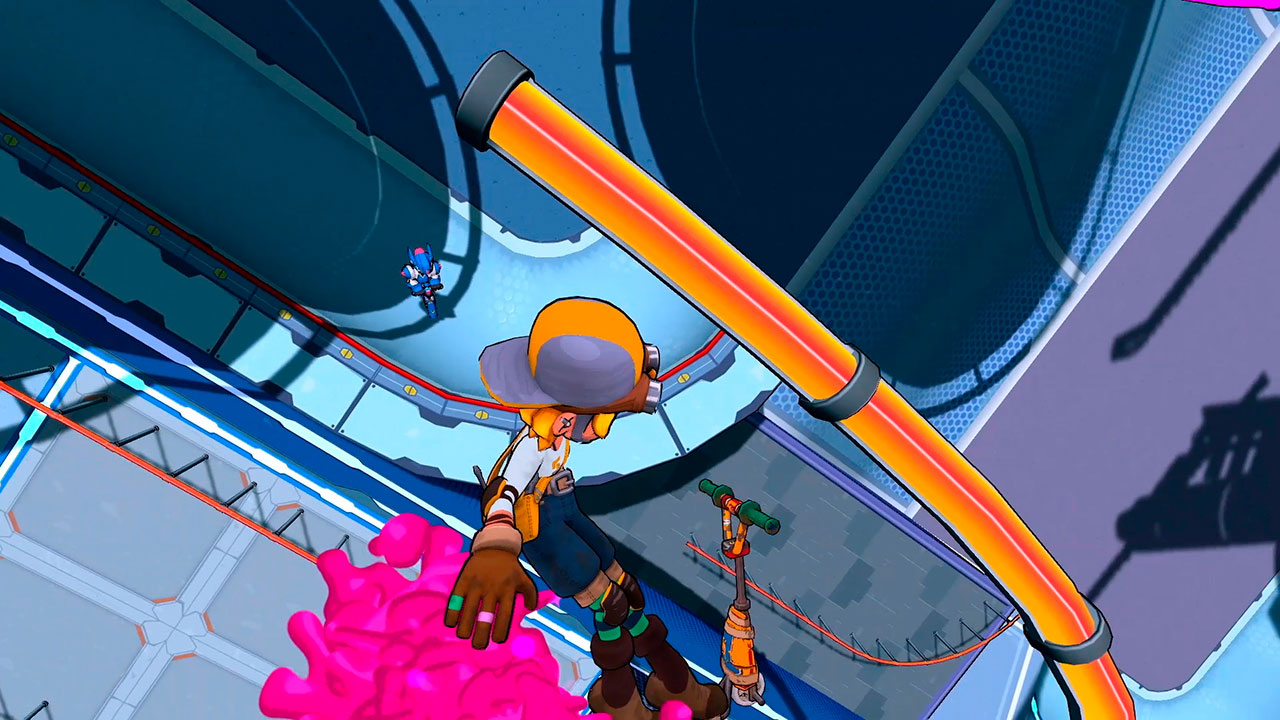 Now, the controls of the game are a bit tricky to understand at first. You steer with one joystick, do jumps with the other, but then the two joysticks also operate different tricks when you’re in the air. There’s a separate button for kicking to go, but you don’t actually lose momentum when you’re just coasting along: you only slow down when you start doing tricks, so constantly mashing the kick button does you no favors. There’s grinding, which is just the best thing ever to do on a scooter (more on that in a moment), and there’s a boost button. The boost is nifty because it naturally recharges over time, not asking the player to do anything special or pick up any kind of magical item to get it back. The boost does come back after as you shoot out spray color everywhere, and you roll over your same color spots. And, as you grind, you spray color as well, and you get to cover the arena in your ink, which sometimes helps you win, and hey wait a minute…

Yes, Crayola Scoot has a lot of similarities to Splatoon in some of their modes, and I absolutely love it. Since a majority of the matches have NOTHING to do with racing, it’s great the different way that Crayola has incorporated in this “cover everything in color” sort of ideology while taking away any form of weaponry. There’s the simple free-for-all method, the team battle setting, and a sort of tag game where to try and get everyone to your color (or stay away from the tagger and stay true blue). Those are just the methods that directly involve the color changing mechanic, and the events that make the most out of the “color triggers” (special spots where, if you color them, your splash can rain down over the arena and guarantee you victory).  There’s also an item finding race, a trick competition (see who gets the most points), and the way that we deal with bosses: HORSE. Or, more accurately, SCOOT. You have ten seconds to land the sickest combo ever and then your opponent has to beat it or take a letter. Five letters, you’re out.

Truth be told, the sheer variety of game modes and levels available in Crayola Scoot is astonishing. From the base game (no idea on expansion or DLC in the future), there are three worlds, each with sixteen different levels and three stages of difficulty to beat them on. That means there are an astonishing one hundred and forty-four different backdrops, with totally different layouts, coloring and styles, for the single player to invest in, and then those same stages are mostly all accessible for the multiplayer modes. I understand that scooters may not be everyone’s favorite modes of transportation, but I have to hand it to Crayola for getting behind just a massive amount of choices for a rather unassuming game. I personally was in love with what I could decide between, as there are plenty of courses that are more rail based, more pool based, some filled with ramps and half pipes and several with colorful rivers that just totally jammed me up when I tried to do anything. I didn’t say everything was awesome, I just thought it was really cool how much there was to do. 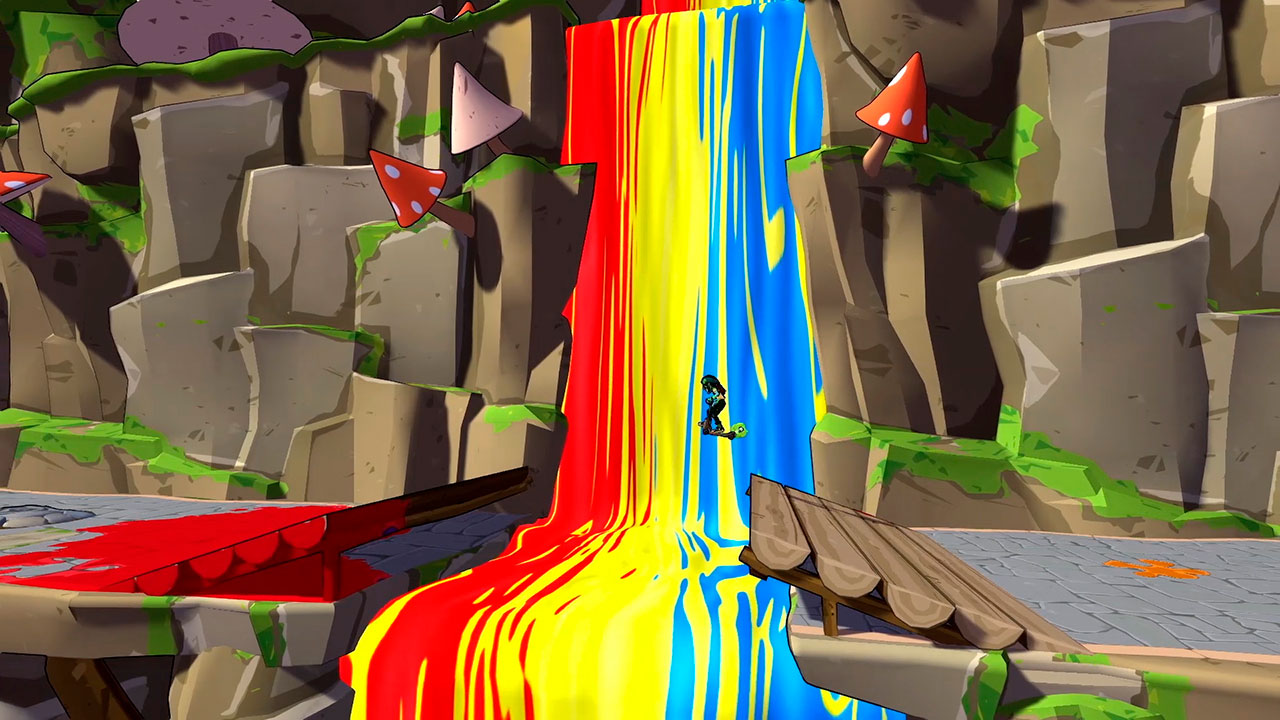 In terms of handling and movement, getting used to the style of Crayola Scoot does take a bit. You have to learn how to land from longer tricks and higher jumps without jamming yourself up and losing all the points. You have to learn how important it is when to hit a boost and when to simply do a standard kick. And you MUST figure out how to grind your little heart away, because, like every trick game ever, grinding is the key to neverending combos and simply disgusting levels of punishment on your friends and CPU alike. Grinding is relatively simple (hold down ZL on the right surfaces), but you also need to keep an eye on when you’re slowing down too much and need to bail. There’s nothing more aggravating than investing nearly 20 full seconds in a five digit combo and then eating pavement because I dismounted poorly.

The difficulty of Crayola Scoot is also a little extreme in the different levels. Easy is, well, easy. You’ll be able to clear almost every stage on easy without needing to understand the game beyond the basics, and, as a result, the first three legendary racers you face off against (including Mort the Zombie, haha) are almost insultingly easy. The medium difficulty actually feels like a perfect balance of moments of real concentration and breathing easy, as you find out which of the events you’re best suited at. Turns out I’m pretty good at doing tricks, and terrible at finding the crayons that randomly spawn throughout the level. When things get hard…well, they’re hard. I did a SCOOT against the CPU set to hard and was beaten handily without even getting a letter off on them. Back to the drawing board and practicing in my free time.

Lastly, Crayola Scoot has done a great job of making the game interesting in terms of replay for kids who want to get the most out of the game. All of the multiplayer modes are available from the very beginning, allowing kids to get right into friendly competition without needing to unlock everything through hours of leveling or arduous investment. The number of customizations that you can get for your scooter (handlebars, wheels, helmet, colors) are plentiful, and actually pretty reasonable on the coin front. You get tons of coins just from entering into competitions, even more for winning, and even more for getting some of the special awards for each stage (longest grind, least number of crashes, etc.). Without trying too hard, kids can spend a little time, maybe beat a boss or two, and have all they need to trick out their scooter, with the incentive to try harder and get more coins for even more style. With the ability to have multiple character slots on the same game, you can effectively have a household of four all have their own customized players race, trick and compete against each other for fun and bragging rights.

I never would have considered a Crayola scooter game simply because the concept was too bizarre. And yet here we are: a really fun game, strongly polished, a ton of content and definitely acceptable for families who prefer no violence and no crazy media in their household. I don’t think we should give up and be fine with no Tony Hawk just yet, but I can safely say that this is a really cool, solid stunt game for all ages. Plus, the ink influence doesn’t hurt to make it more than just a kids stunter. Don’t dismiss it: this game’s got all the right moves.

Crayola rolls onto the Nintendo Switch with an odd choice of vehicle – a scooter – but really makes the whole experience fun and fascinating for everyone.