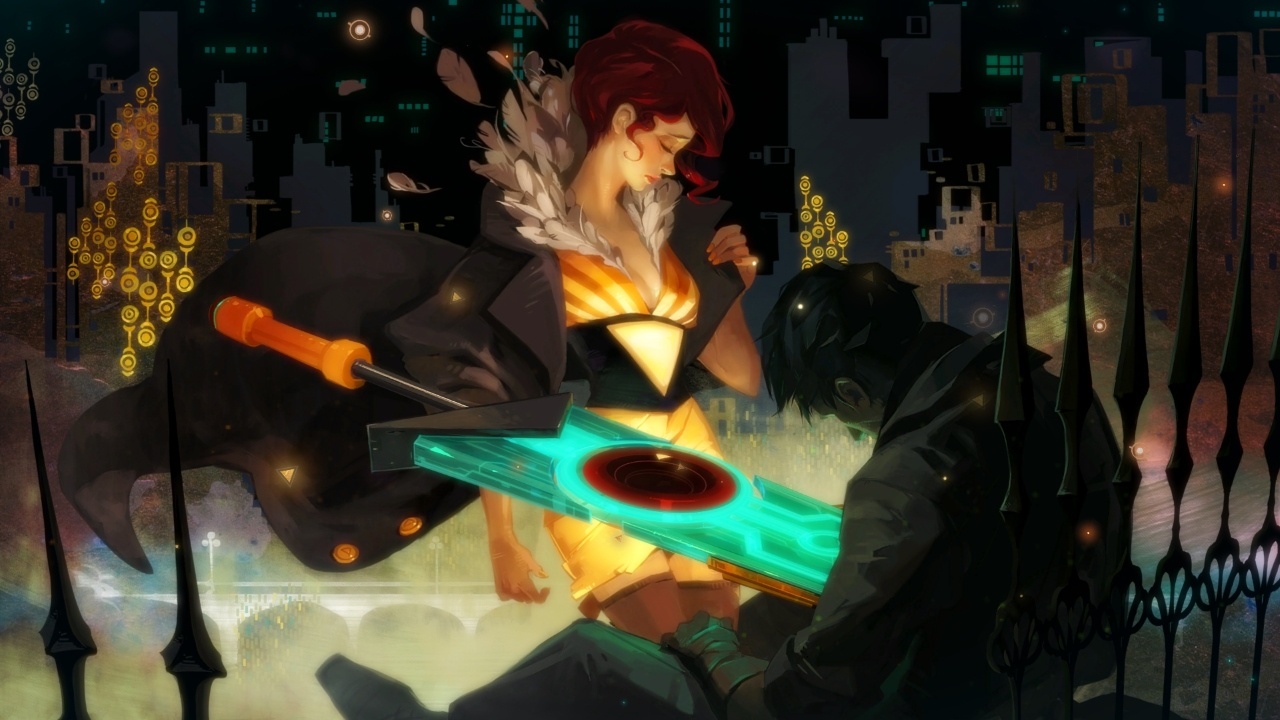 When it comes to a great story, one of the most important elements is the short but key phrase “Show, don’t tell.” There are so many potentially amazing moments of movies, games and books that are completely shattered by a single character or group of people deciding to monologue exposition to the nth degree and treat the audience like idiots. It makes sense that we want to keep the story moving along, but it also undermines the ability for players and viewers alike to be immersed in the experience and use their inferential skills to piece things together. Supergiant may be well-known for their narrative style in gaming, but, after playing Transistor, I can see they’re also damn good at letting players get to know things bit by bit until you have one beautiful puzzle.

Instead of giving you the usual plot rundown, let’s paint a picture of the opening scene. A futuristic city, caught somewhere between cyberpunk and dystopian. Massive, neon buildings pierce the veil of night and scratch jagged scars into the sky. A woman breathes heavily, calming down as the man in front of her dies, impaled upon an impossibly big sword. This sword is the Transistor, and it was brought here to kill her. Suddenly, the sword begins to speak: it knows they must flee, immediately. We find out, soon, that the woman was a singer, called Red, and she can no longer make a sound, as the sword may have, inadvertently, stolen her voice. The sword finds other lost souls along the way, pulls them in, makes itself stronger as they forge a pact together. But the Transistor isn’t malevolent;  it urges Red to seek refuge, to get as far away from the city and whomever put out the hit as possible. But Red isn’t interested in safety, not with her voice gone and her innocence shattered. This is a path of revenge and uncovering the truth. And Red isn’t the type to simply let things go.

Transistor is a unique action/adventure game with an isometric point of view and an interesting upgrade and level system. The game takes place over the course of Red’s search for the truth through the city of Cloudbank and her encounters with a robot group known as The Process, whom we later find is working for a larger group called Camerata. As you move forward, Red will be able to gradually upgrade and power up Transistor through different chunks of life and light that she might collect from defeated enemies. The power up system is great, as it gives you versatility in how you’d like the combat style of the game to proceed. For example, with a single “level up,” you’ll have an option between attuning certain skills more towards a stealth or heavy hitter approach, thus letting you carve out your path forward in the way that you like best. It’s interesting, and adds a layer of role-playing that you can spread on top of everything else. 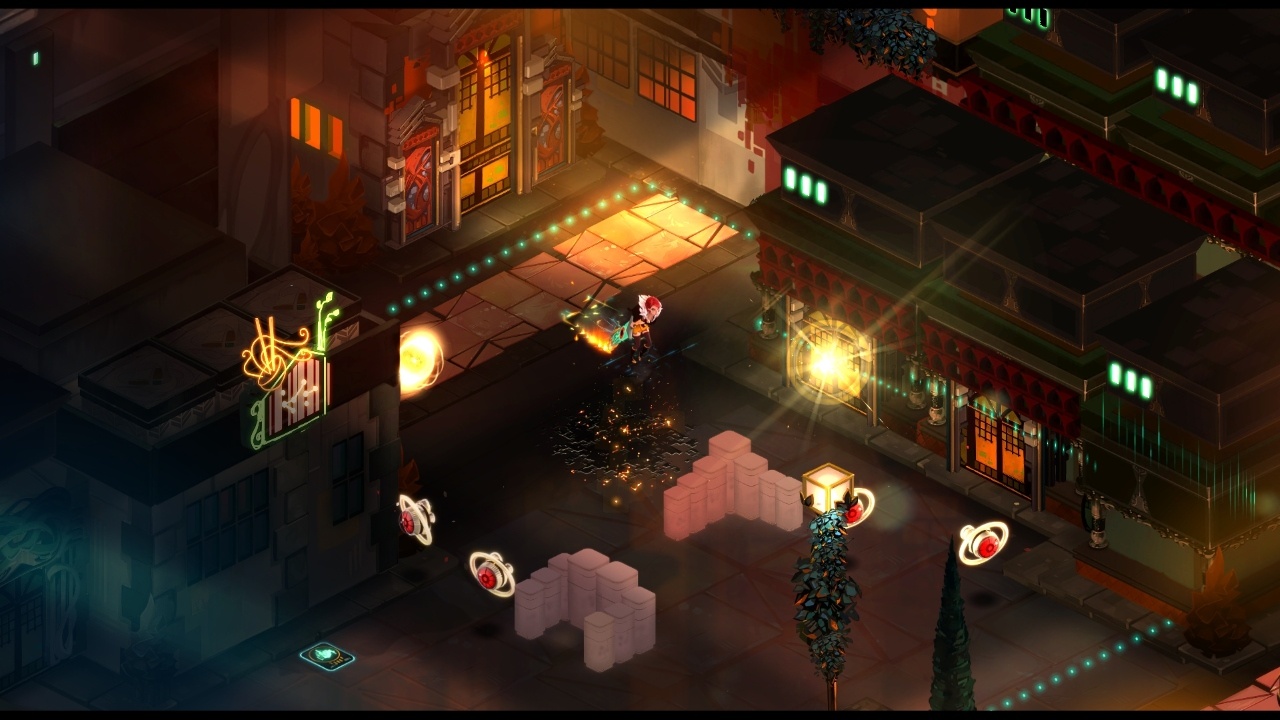 Combat will crop up quite a bit and is one of the main draws of the game. While there is a bit of exploration and problem solving/information retrieval, a good chunk of things are dedicated to you smacking around bad guys with Transistor. Much like Bastion, Supergiant has taken care to keep things in Transistor interesting so that you don’t feel like you’re repeating yourself too much with the fighting approach. For example, you could, if you wanted to, make it a strictly arena hit-and-run style game, focusing on fast fingers and beating the living hell out of the Process through melee and some ranged attacks. However, that would be underutilized the incredibly cool Turn() method. With this, Red can plot out a series of moves, from hits and dashes to stacked charged attacks, and then execute them with brutal speed and accuracy. The Turn() serves a dual purpose, both adding something exciting to the game that makes Red a really believable heroine AND creating a different approach for players who are less than swift on the fingers. I’ve heard of some people who were able to play the whole game without even needing to Turn(), but I prefer it, and it made fighting larger bosses easier and more interesting. Feel free to experiment around: Red will automatically recharge her health between fights, so you don’t need to worry about running yourself down to almost dead and then dealing with the aftermath in the next battle.

Transistor’s combat is great, but, as usual, it’s the presentation that Supergiant brings to the table that sells the product entirely. Visually, Transistor is absolutely stunning, and I’d argue that it’s more engaging than Bastion was. The dark cityscape juxtaposed with the constant hum of nightlife energy is gorgeous, and there’s such generous use of color that you get easily sucked into the world of Cloudbank. When you finally get a chance to see what it’s like inside Transistor, it’s a marvel to behold, and something that I honestly wasn’t ready for. The character and enemy designs alike are superbly crafted, and the only word that I can hit upon is “memorable.” 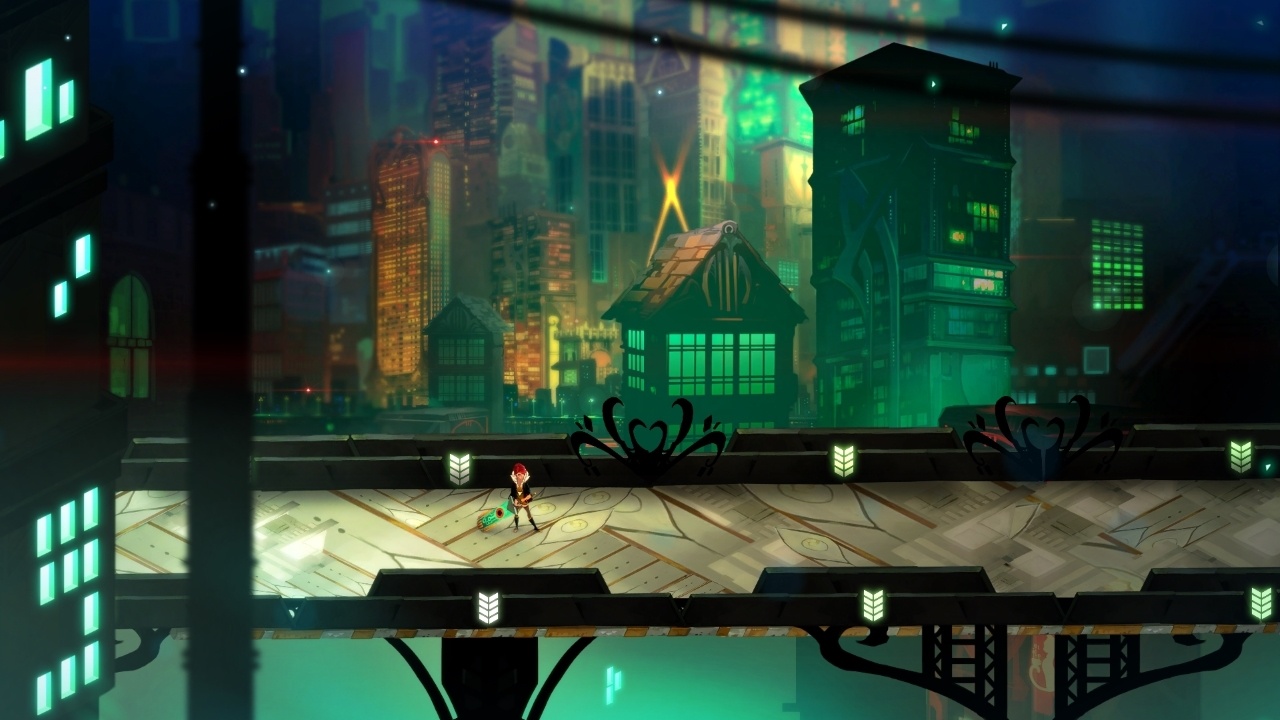 And, naturally, the sounds and music of Transistor are presented in an overtly elegant fashion. The atmospheric soundtrack keeps you alive and trained in on the story, which takes its fair share of wild turns (especially towards the end). While the narrator from Bastion probably has the most memorable voice, Transistor itself does a wonderful job of speaking in these soothing, informative tones that make it less robotic and more human. Since Red is unable to speak, Transistor does a lot of the heavy lifting, making some general observations but mostly trying to keep things together, talking sense and offering suggestions that are well-timed and not relentless. Maybe it’s because I just got over Ryder in Paw Patrol talking to me nonstop, but Transistor, by comparison, was brief and welcoming in his talking.

As Transistor is a PC port that’s really quite well-known (over 100 accolades, according to their website), the question comes up of if it’s worth a Switch port. Well, in terms of new players, the answer is an unwavering yes, and anyone with an itch for indie games with a soul should definitely look into it. There isn’t a lot of replay value unless you are totally smitten with the game, at which point you can look into trimming your run time or even expanding it to leave no stone unturned. My first time playing I probably put in close to ten hours, but, subsequently, now that I know what is and isn’t waiting around the corners, I feel confident I could drop that by more than half. And, as a mobile performance, Transistor performs phenomenally, as Supergiant made sure that the port was tight as a drum and runs with no issue. The Recursion mode that comes after the main game is a nice touch, but also only appeals if you were fanatically into the combat system.

Here’s how I always look at the port of indie games to the Switch. You need to consider it based on having played it before or not. If you haven’t, consider it like a good recommendation from a friend and understand that not everyone will have the same tastes as you. People lose their damn minds over Breath of the Wild and I simply didn’t care for it as much as everyone else seemed to. And, if you’ve played it before, liken it to your favorite films or TV shows. I enjoyed There Will Be Blood, but I wouldn’t buy it again on Blu Ray. However, there are movies that I’ve bought upwards of four times now, and may buy again when the medium inevitably changes. That’s where Transistor is for me. My Steam copy will gather dust and stay around as proof of where I started, but I’ll move forward with the Switch, happily. If that’s where you mind may go, consider grabbing it again so that you can journey back to Cloudbank with Red for one more round.

Fall in love with the first five seconds and never let go until she does.